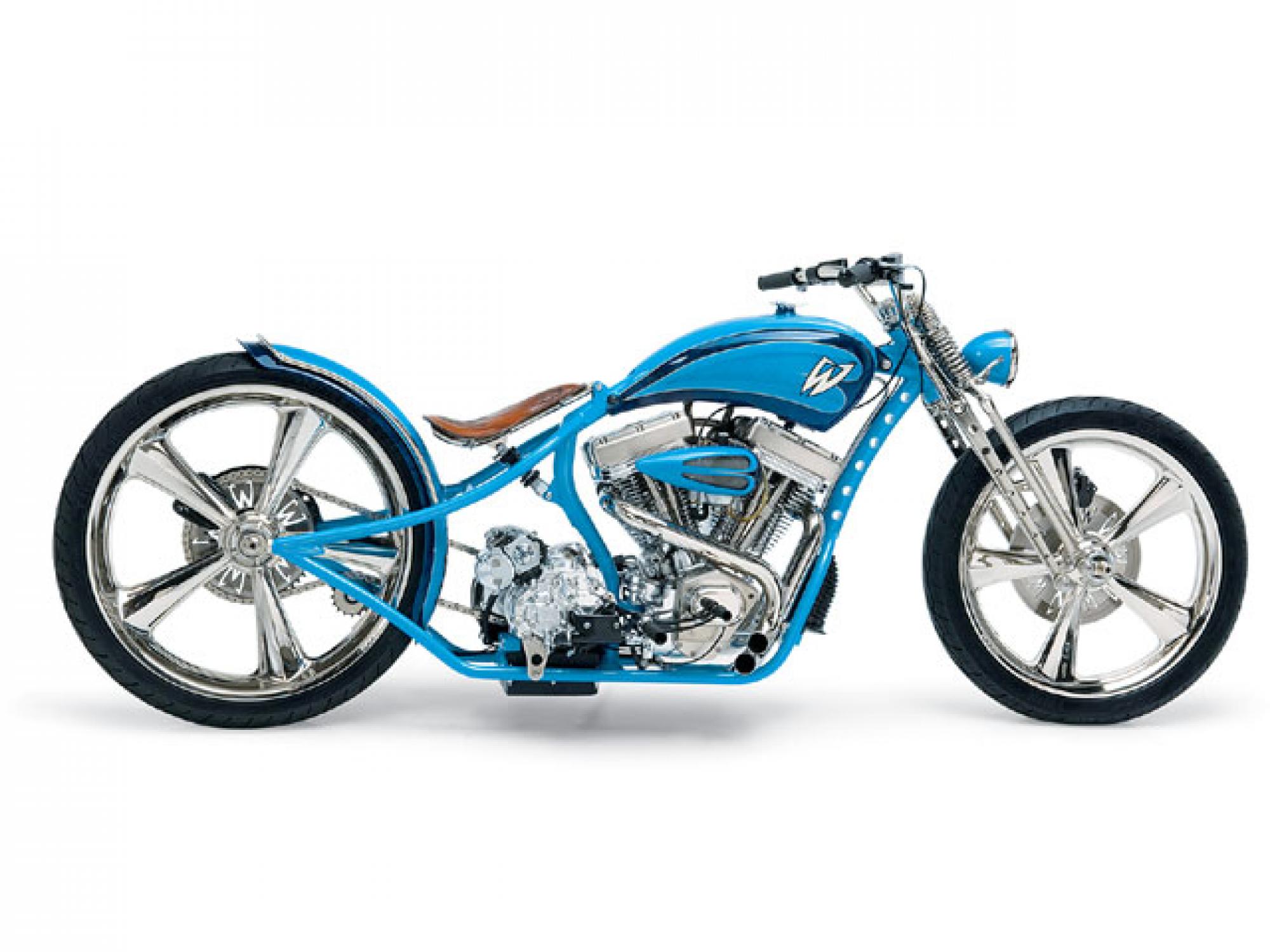 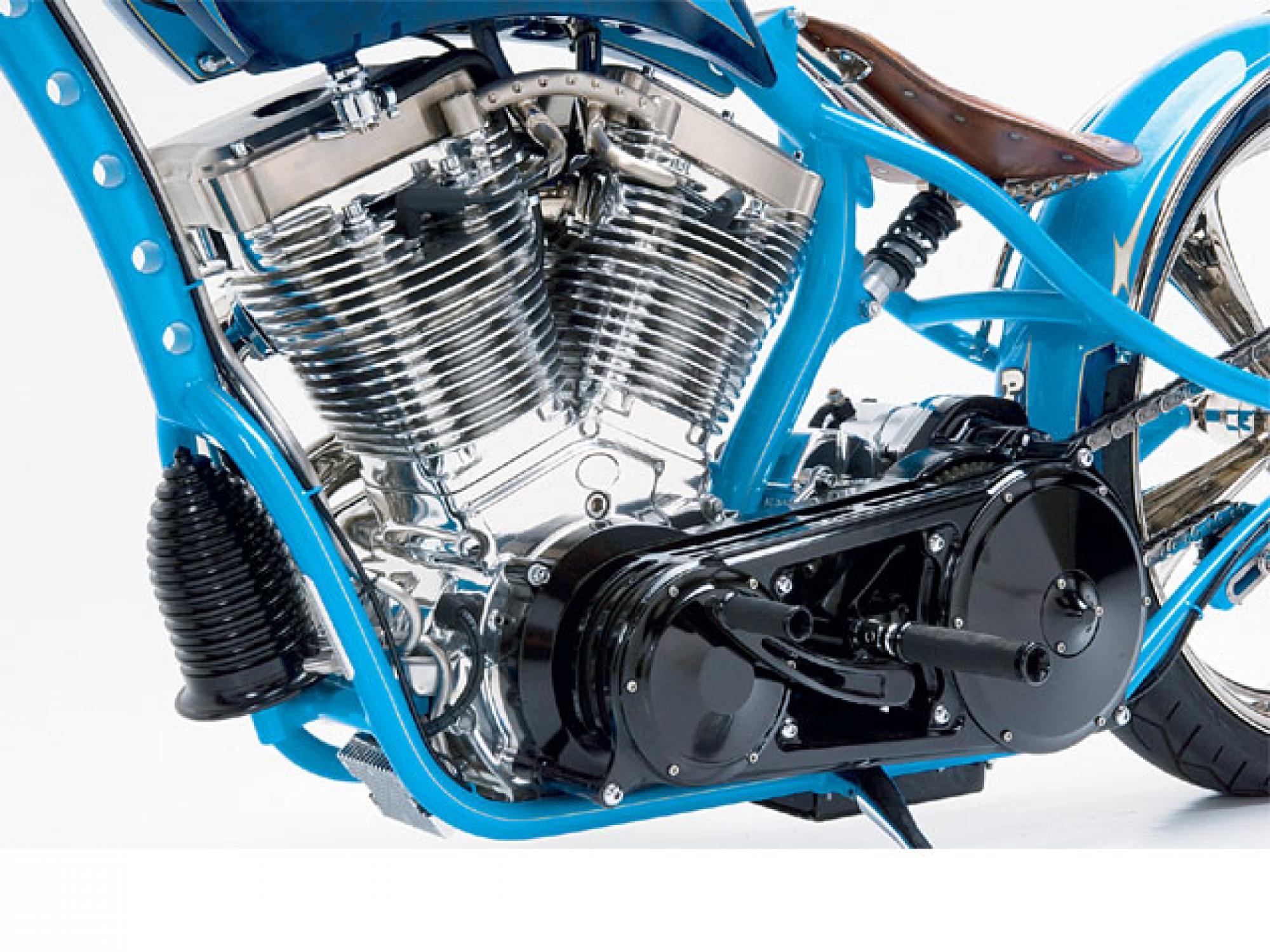 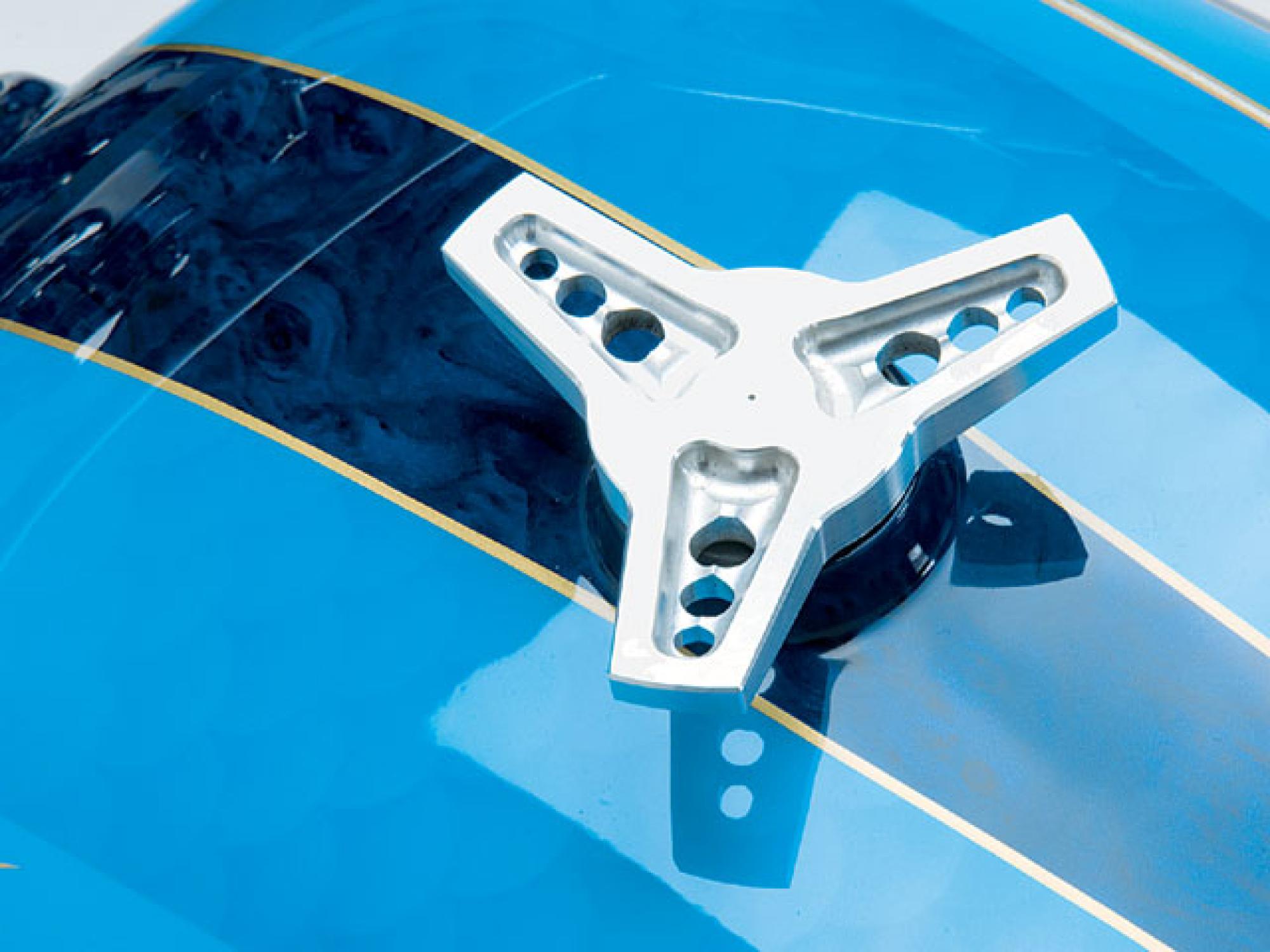 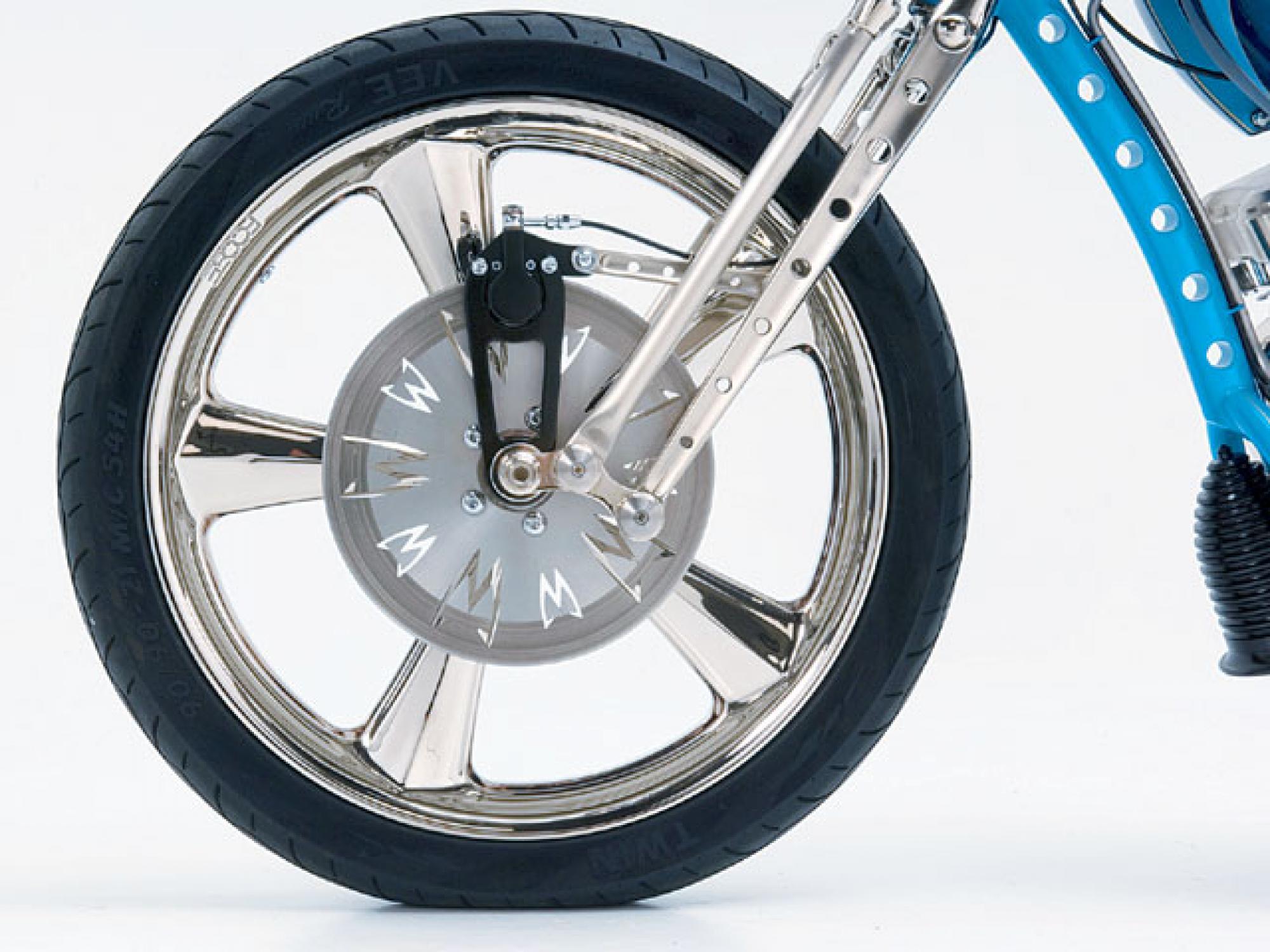 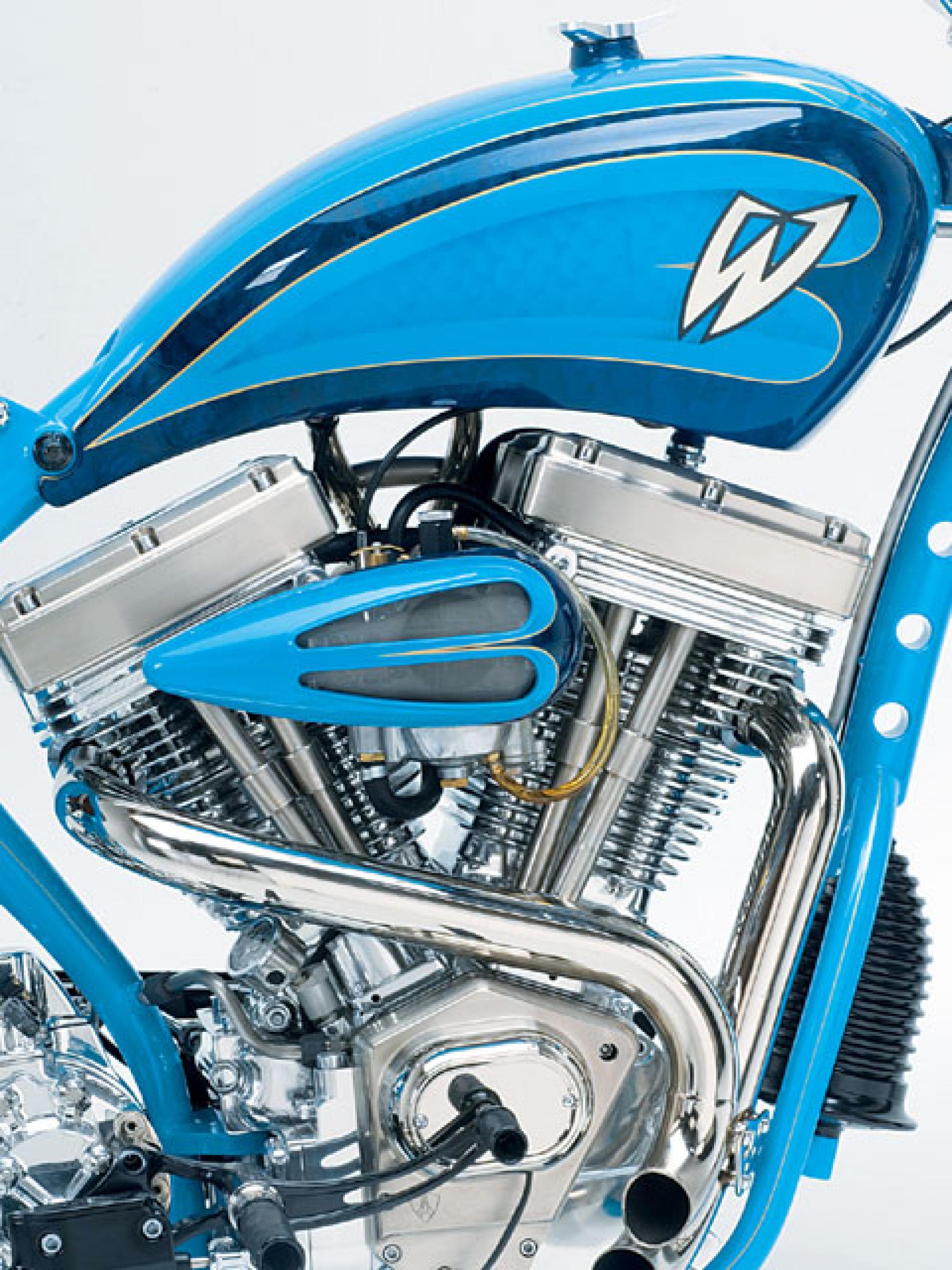 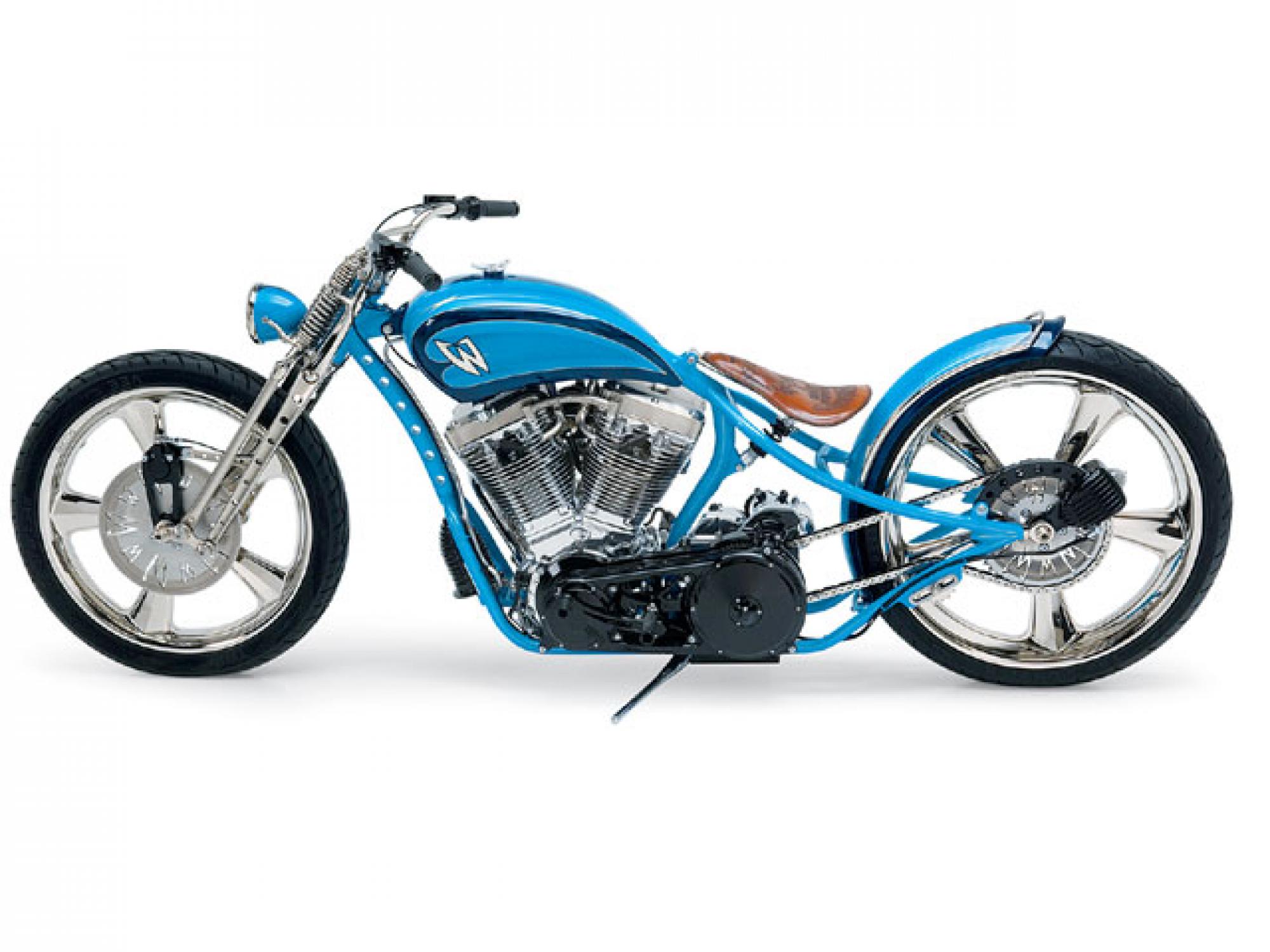 Greg Westbury wanted to try something a little different. His Artistry in Iron-winning bike, “Lucky,” presented a difficult act to follow when it came time to knock together a new ride. He designed the famous green bike-appearing on the cover of HOT BIKE magazine-to go against the grain. Like any builder, he wanted to take his game up to the next level and improve off his previous effort. In the case of this blue bike, its existence stems directly from Lucky and its success in the Vegas show.

Like any other production that relies on outside talent, Discovery Channel’s (now The Learning Channel) Biker Build-Off (BBO) knew they would have a boatload of builders to pick from, and a few scouts happened upon Lucky after its victory. They talked to Greg and told him they’d like to work with him for the TV show, but didn’t really give him a timeframe. He agreed, then headed home afterwards and went about his life. A month and a half went by before BBO said “You’re up,” and then he had six weeks to get ready.

He knew that he wanted to continue the level of being different that he started with Lucky, but had to be careful not to design a carbon copy of the previous scoot. When the bike first started coming together, he was afraid that it might turn out looking the same, but inspiration came in the form of a taller back wheel. Once the 23-inch format was settled on, the rest started coming easier. The Build-Off bike no longer looked like a twin to Lucky in his mind, and the new assignment proceeded.

Putting a bike together with a camera crew constantly underfoot took some getting used to.”You have to move them out of the way to do stuff,” Greg said. “It’s crazy.” While he was flattered by the show’s attention to him, he admitted that having the crew filming his every move got a little stressful. “They told me they shot over a hundred hours of film just on me! I think we only appear in the episode for about 25 minutes. I guess they picked the cool stuff.”

Still, the effort seems to be well worth it. The nameless blue bike was built on a simple principle: “Enough’s enough. There’s nothing gaudy on it, nothing trendy. It’s based on old hot rod stuff.” Greg paused in the middle of his reflection. “I wanted it to be timeless.”

The result of all this is a bike that looks like it has a purpose-a bike that wants to get up and go. From the 92-inch round cylinder S&S; Evo to the W&W; Springer reproduction frontend, the bike clearly means business. While beautiful in its own right, it’s also easily a bike that one can envision hopping on and taking out for an adventure. It’s got an edge to it; more than anything, it’s an honest-looking piece of iron just as much at home on a mountain road as it would be on the show floor. The appearance fits the name it was eventually graced with: El Pobre Gringo, when translated, means poor foreigner (or in more popular slang, poor white guy)-and the bike’s lack of bling and extra parts make it a far cry from the exotic and often unridable show bikes one sometimes finds on the circuit.

The story of the paint color is an interesting one. The Westbury team couldn’t really nail down a particular color they wanted and ended up doing a number of spray-outs and samples. Inspiration struck in the form of an old Cadillac painted by Marcos Garcia in a beautiful shade of blue. The color stuck in Greg’s mind throughout the build, and painter Eric Reyes did a lot of mixing and matching before nailing the blend that duplicated the Caddy’s paint scheme. The blue-with its darker accents-suits this bike nicely, as a wild paint job would distract from its clean, simple lines. Blinding chrome would have been a distraction as well, so it was nickel-plated to give it a pleasant (but not retina-splintering) gleam.
The vintage-looking seat sports a bucktoothed, buck-eyed horse peering over its hind end. It’s tough to say whether the horse looks like it’s surprised or just grinning maniacally, but it’s certainly distinctive. “We were going to put the Discovery Channel logo on the horse’s ass,” Greg said. “We used mine instead, though.”

For the 500-mile post-build-off trip, he tossed the bike into a truck and hauled it down to Florida. “We thought there’d be good weather,” he said, which means that the instant they pulled the bike off the back, the skies opened up and it poured for two hours. “I was riding along behind the Discovery Channel truck thinking ‘I can’t believe I’m riding this f*cking thing in the rain.’ I mean, it was brand-new, right off the trailer. Man.”

Happily, the weather did improve, and some filming was done at Cape Canaveral, where the space shuttle takes off and lands. The bike performed beautifully; one bolt on the back fender vibrated off, but that was it. “It runs like a top,” he said proudly. “Just put in the gas and go.”

At the end of a tough build and over a hundred hours of cameras taking in every little motion, getting out on the road was at once liberating and exhilarating. Greg recalls looking at his BBO competitor Bryan Fuller in the midst of some truly amazing views, both of them feeling the surreality of the moment and wondering, “How’d we get to come here?”
The answer to that question, at least on the surface, is easy: He got there on a dashing blue bike that just wanted to be different.

Arnott has released the Aldan Adjustable Air Suspension Kit for 2015 Harley-Davidson Touring Models with ABS. The kit includes a […]

Speed’s Spotlight “That hot-Harley syndrome doesn’t have to be permanent. There is a cure. There are number of them actually.” […]

Never before in the history of custom motorcycles have there been so many talented people involved in the industry. In […]