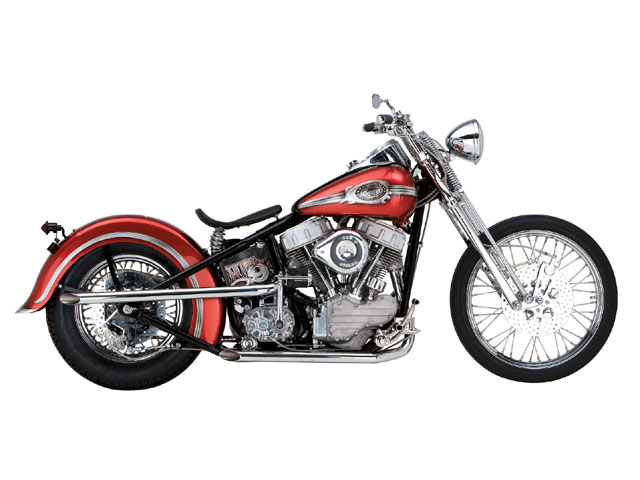 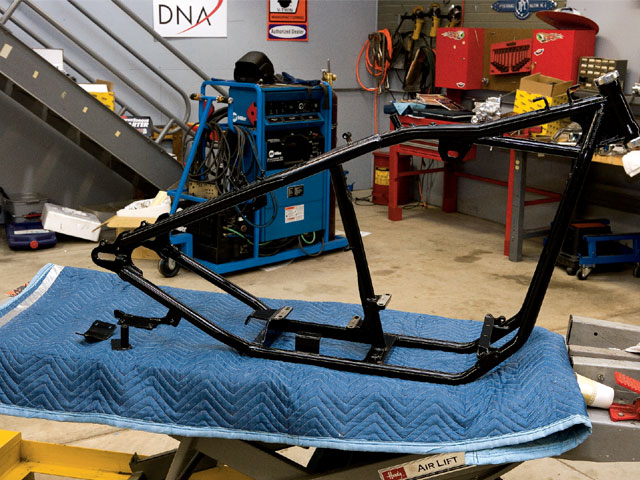 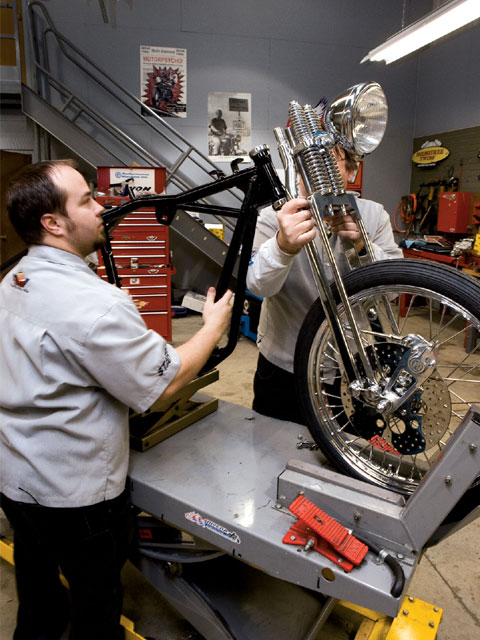 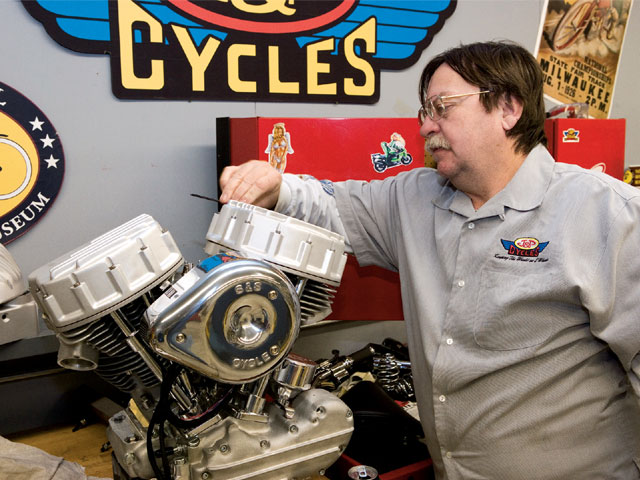 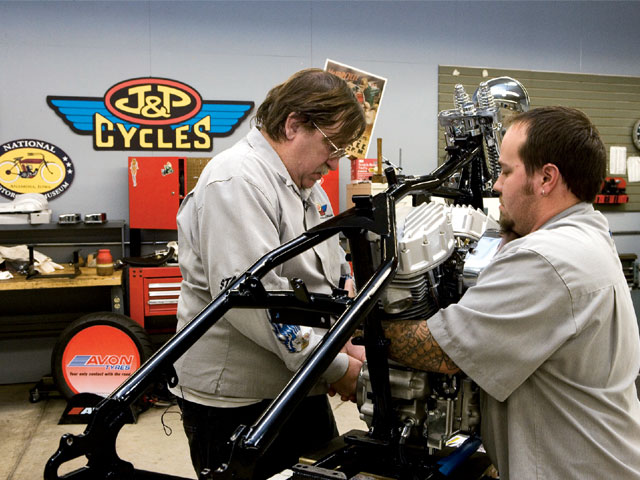 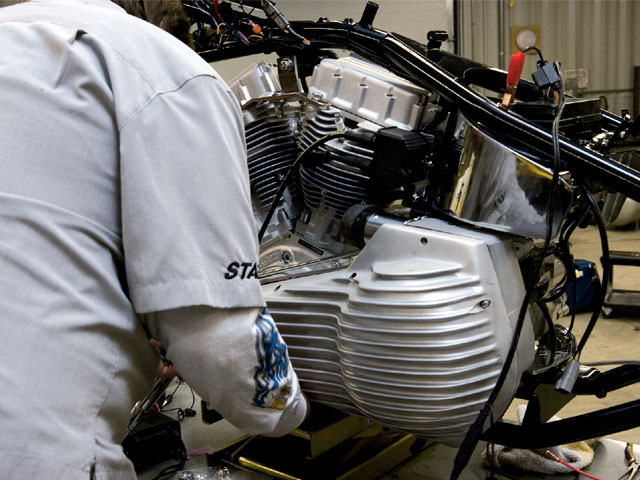 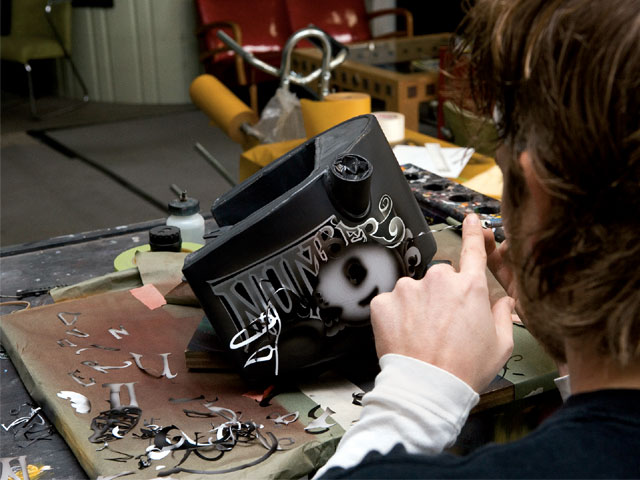 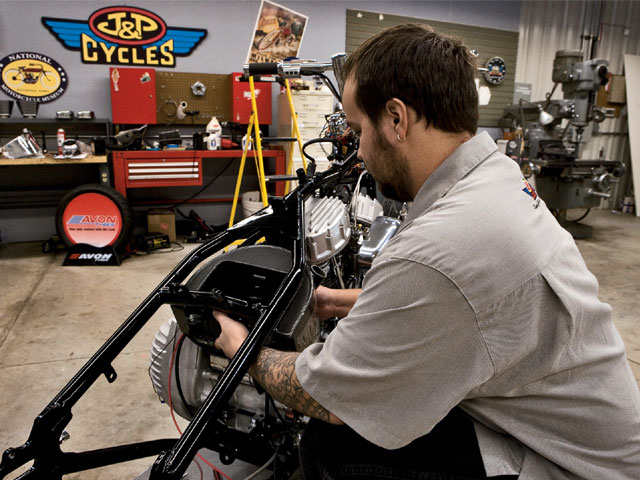 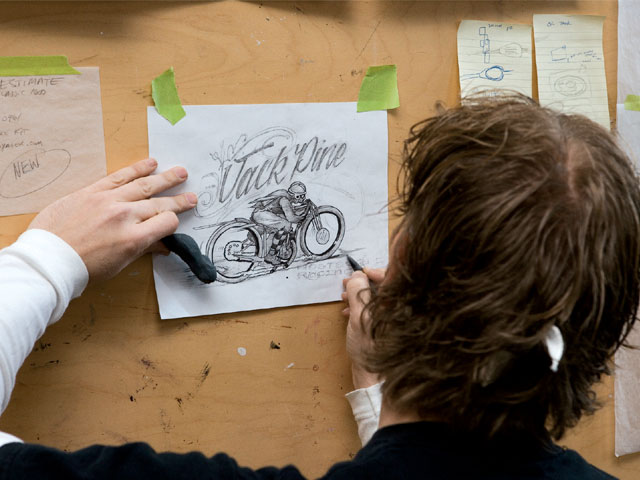 You could win this bike for as little as five bucks! All it takes is buying a raffle ticket and hopefully when the time comes they draw your number. Here at HOT BIKE we know that you read every issue from cover to cover and buy extra copies for your friends and mom, but in the exceptionally rare occasion that you missed the #5 (May) issue, we told the story of how J&P; Cycles built a bike to raise money for the National Motorcycle Museum in Anamosa, Iowa, which will be raffled off to help keep the museum doors open and to showcase new exhibits. In the first part of the story we showed the basic mock-up of the bike, giving you a look at what it will look like. It was nice to see the bike so close to getting on the road, but sadly the bike was torn down by Kody Wisner and Jeff Wiley of J&P; Cycles and the sheetmetal was sent to paint and the frame out to powdercoat.

Part two of the build will show the paint steps and the rebuild of the bike so that it can be photographed and then given to one lucky guy or gal with the right ticket. The drawing for this bike is late December, 2008. Enter today-you don’t need to be present to win. All donations to the museum are tax-deductible and help create new exhibits, obtain new bikes, and help with general operations. For more information on the museum and getting raffle tickets, go to www.nationalmcmuseum.org, or call (888) 994-7677. A link to the museum can also be found on J&P;’s website (www.jpcycles.com).

When we left the bike, Kody and Jeff had most of the mock-up done and were starting the tear down. Some things were going to need more time to get painted, so they were shipped out and started a little sooner. The frame was sent out to get a glossy black powdercoat, and the oil bag and sheetmetal was sent over to Underground Studios where Scott, Hugh, and Casey got started. As the bike was getting built, Kody knew that the oil bag needed to get on it before the sheetmetal, and with all the logos and airbrushing going into the paint, there was no time to waste. There were still a lot of deadlines to meet, but everyone pulled together and got it done. We also need to point out that in part one we said that the motor was an S&S; 103ci Panhead. We were close, but it was an S&S; 93ci Pan.

(1.)Once the frame was back from getting powdercoated black, it was placed back on the lift, and Kody and Jeff got started rebuilding the bike.

(2.)The frontend was slid through the neck stem and bolted in place.

(3.)Jeff installed the Panhead cover back on the 93ci S&S; motor. One cool thing they did to the bike was bead-blast all the cast pieces. The idea was that the motor is a 93ci S&S; Panhead with cast parts, and there was not a lot of chrome on the bike. They felt that the right look was a cast finish. So all the cast parts, along with any raw aluminum parts, were sent out to get bead blasted. This way all the parts would look the same.

(4.)Once all the covers were back on the motor, it was placed in the frame.

(5.)With the S&S; Panhead in the frame, the Baker transmission and inner and outer primary drive assembly were bolted together.

(6.)As the drivetrain was going together, Scott at Underground Studios got started with the oil bag first. It was the one thing Kody and Jeff needed sooner than the rest of the sheetmetal to keep the build moving on time. Scott was told that on one side of the oil bag he could work his shop logo (Underground Studios) into the paint.

(7.)On the other side (right) of the tank, the number #9 was worked into the paint job. This will play out through the paint theme later. The number #0009 is the number on the S&S; pan motor,the 9th museum bike giveaway, and the #9 just happens to be the number on the race bike on the photo seen for the ideas for the bike.

(8.)As soon as the oil bag was painted, Scott delivered it to the J&P; shop in the nick of time, because Kody needed the oil bag in place as the transmission and starter were in place. This would allow the build to keep moving as the rest of the paint was getting done.

(9.)Back at the paint shop Scott was working on painting the sheetmetal and the logo for the gas tank. He started with a sketch he did of a board tracker bike, then he needed to work it into the National Motorcycle Museum’s logo.

(11.)The color of choice was candy red with silver and gold graphics. Then Casey, one of the other painters, placed the logo on the tank.

(12.)The logo and the striping along the tank and fender needed to get masked off and trimmed before the next coat of silver paint was sprayed on.

(13.)Scott airbrushed all the silver graphics along the fenders to look like frame rails.

(14.)The gas tank logo has stars worked into it to flow with the rear fender. However, the stars on the fender will have a little twist to them. Scott didn’t want the stars to look flat, so he planned to add gold shading to all the edges. To do this he went with nautical stars with shadows and highlights in gold.

(15.)Then Hugh pinstriped the line edges of all the stars in candy red.

(16.)Scott finished working on the gas tank as Hugh was striping the stars. He worked the number 9 in to the racer’s race plate on the logo. A lot of time was spent on this logo to get it just right.

(18.)As soon as the paint was dry, Scott delivered the sheetmetal back to J&P.; Everyone in the shop was lucky to get a sneak peak at the paint.

(19.)First, the rear fender was installed…

(21.)The gas lines were installed and connected to the carburetor, along with the crossover line.

(23.)To top off this build Kody installed the spring solo seat. Then he filled the tank with gas and took the bike out for a few shakedown miles.

(24.)Here is the bike you could win for just $5: a 2008 Custom Panhead. If you want a shot, get your tickets now. Tickets are six for $25 or $5 each, and all proceeds benefit the National Motorcycle Museum.

01. Here is everything we used for the swap: (A) rotary tool with a flex shaft attachment, (B) large screwdriver, […]

Caddy ComfortRiders using RaceTech’s Caddies suspension will notice a much plusher, smoother ride on square-edge bumps such as expansion joints […]

Video: The Race Of Gentlemen