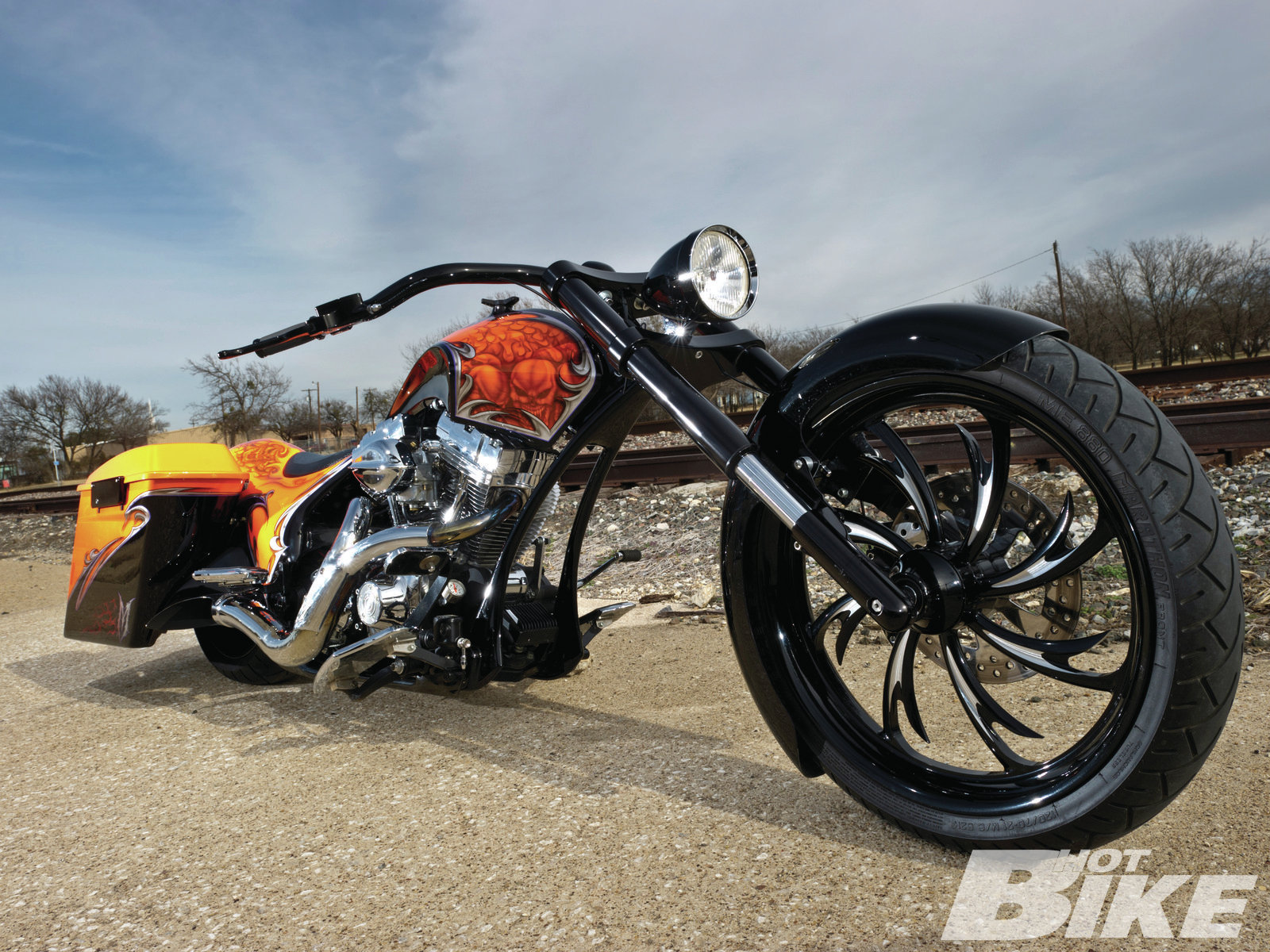 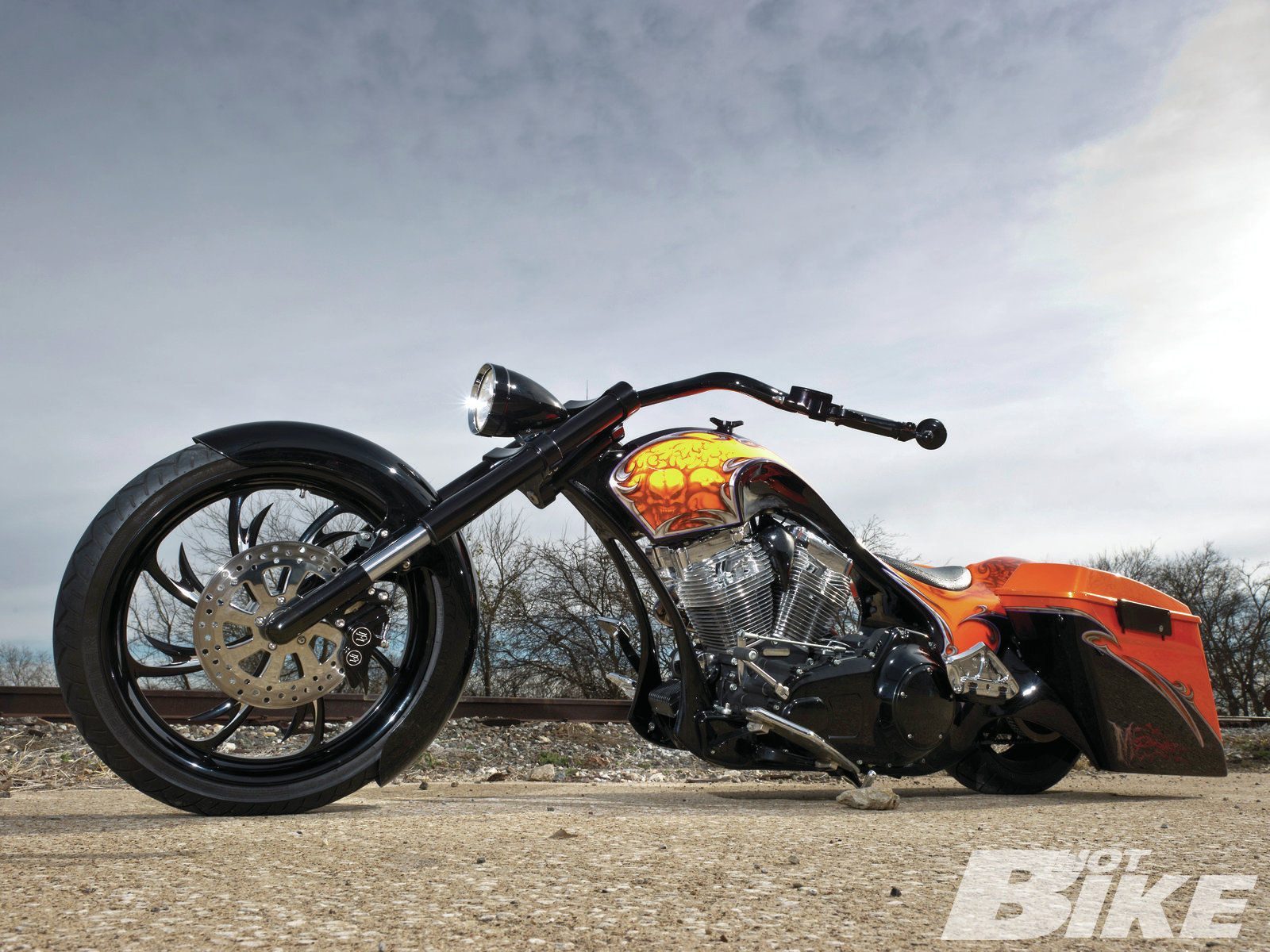 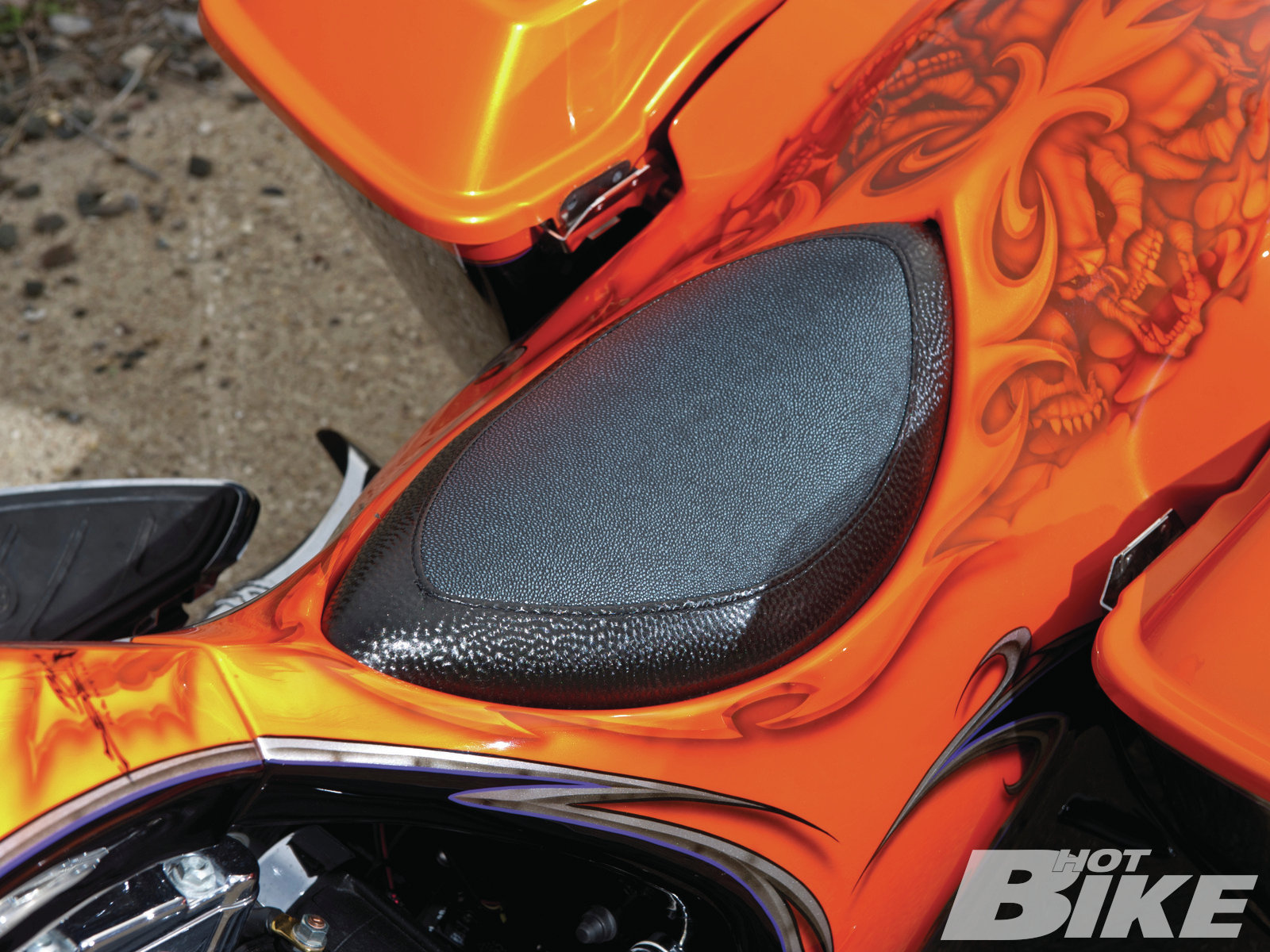 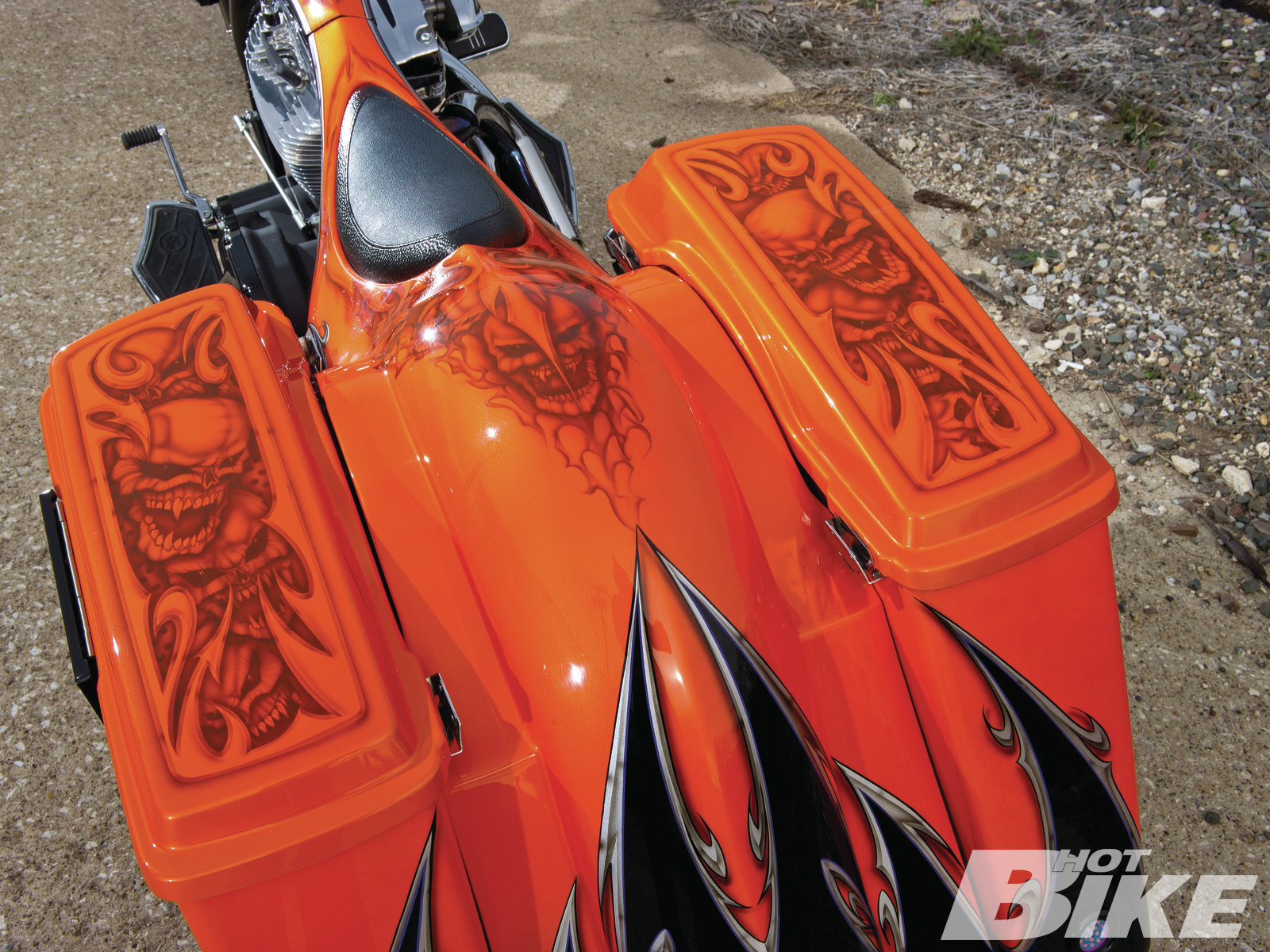 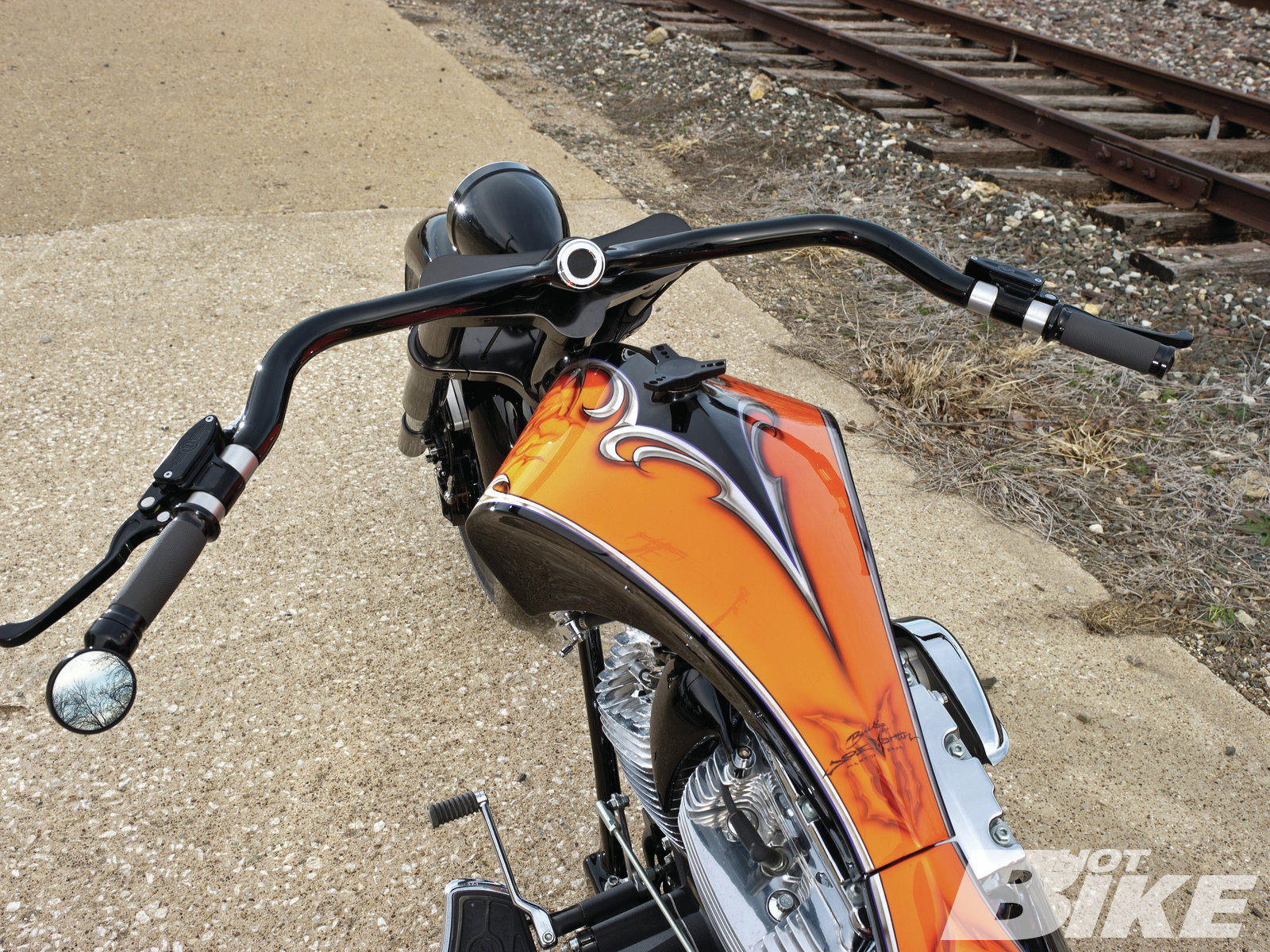 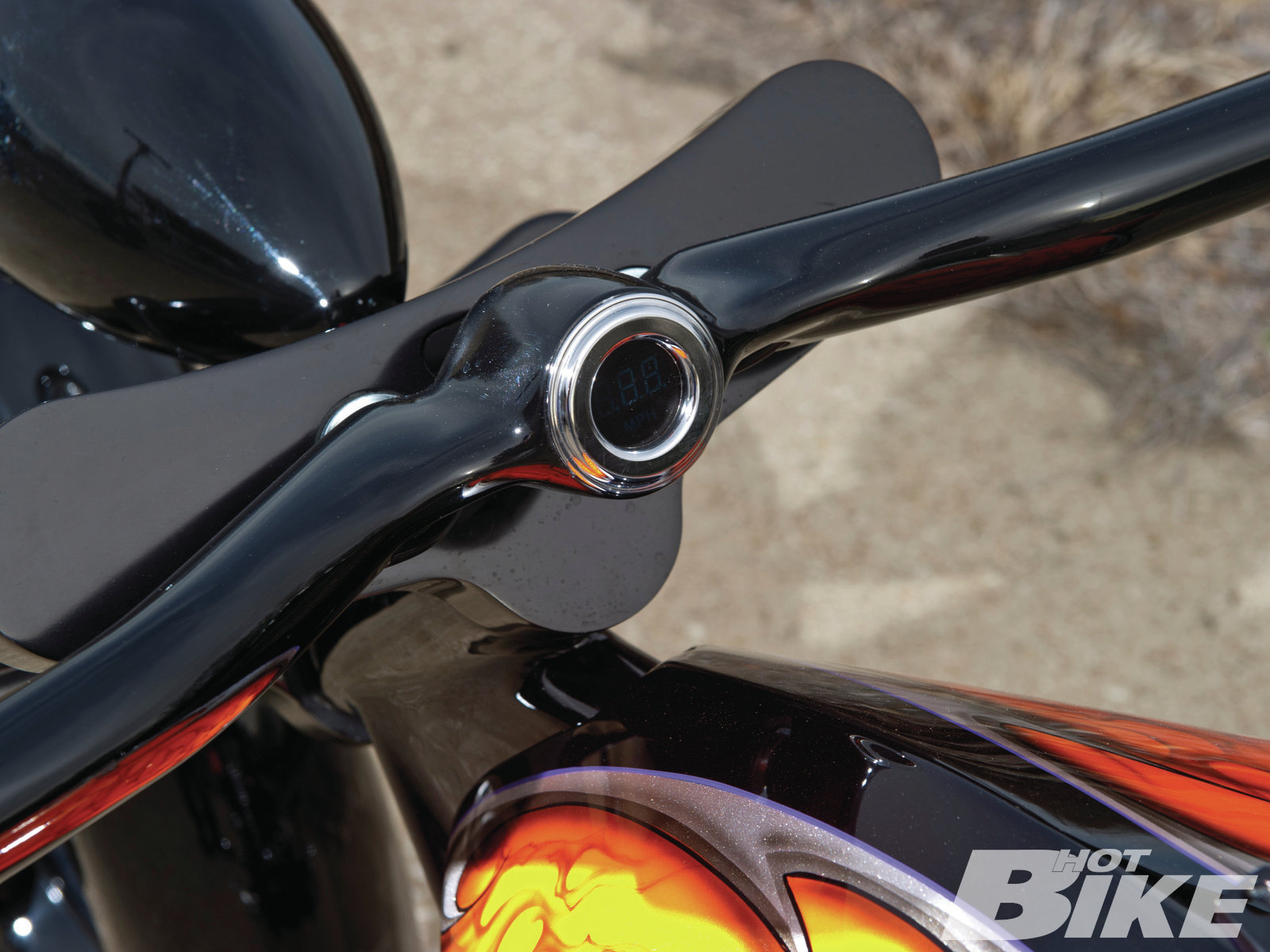 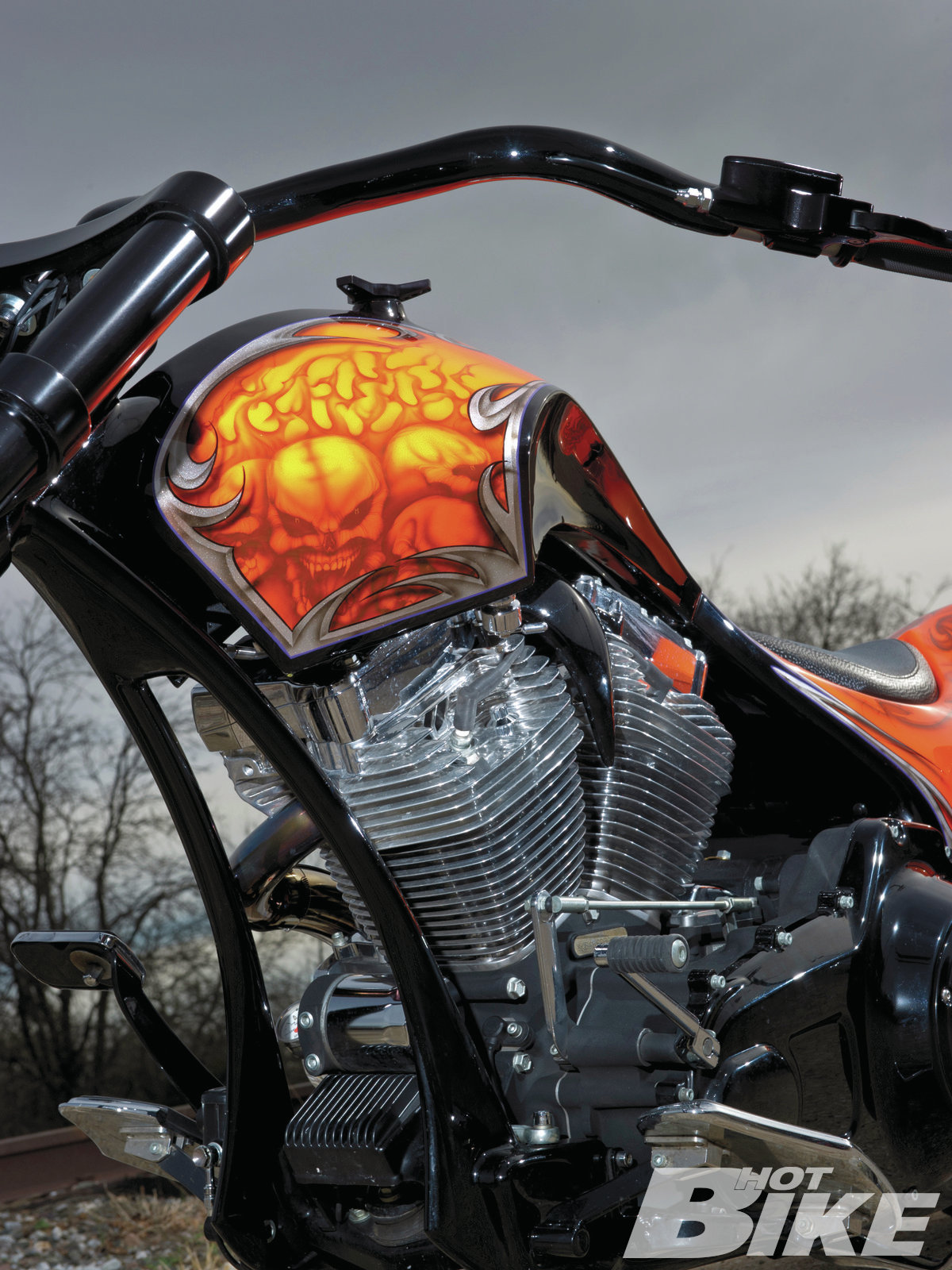 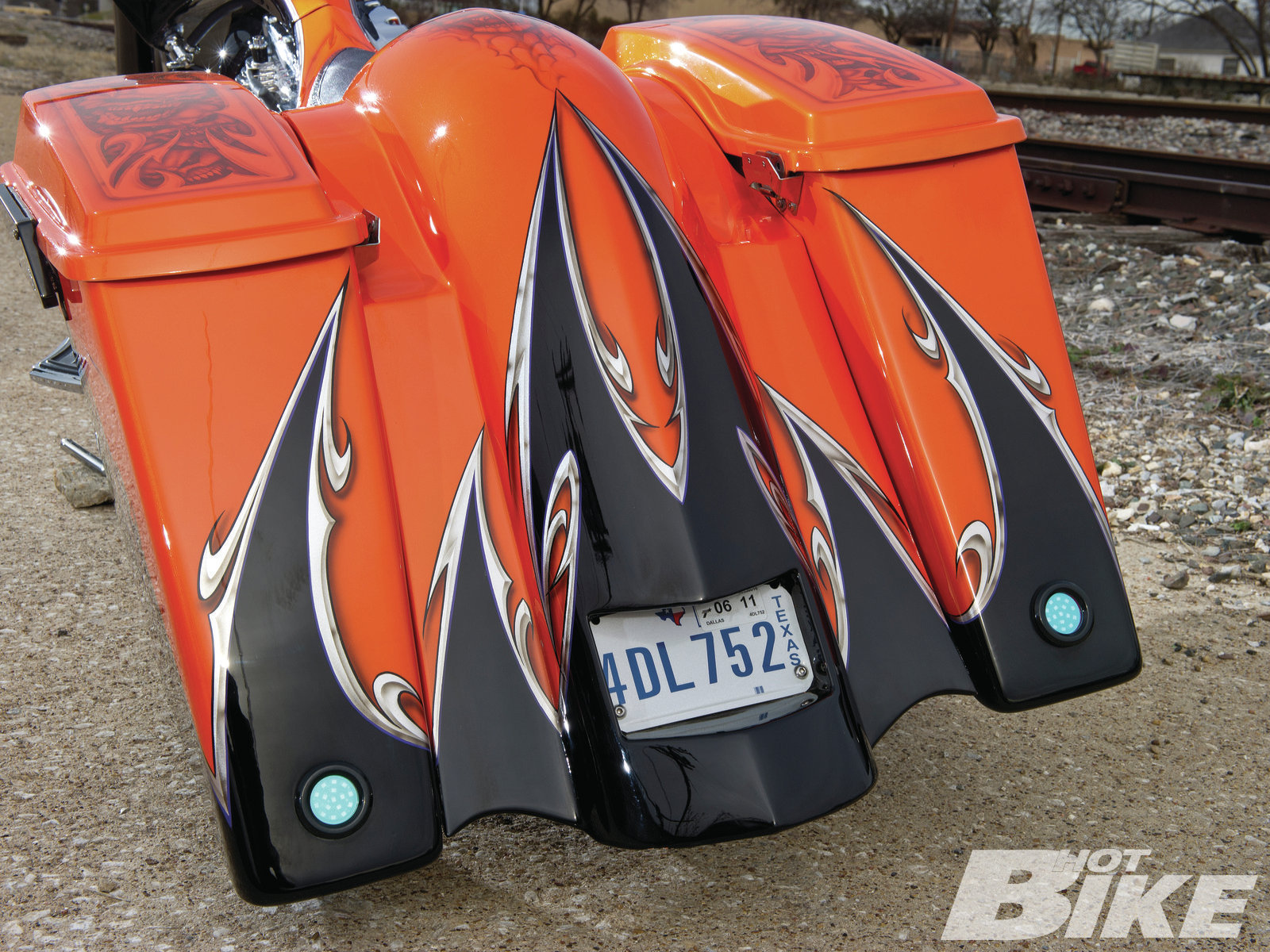 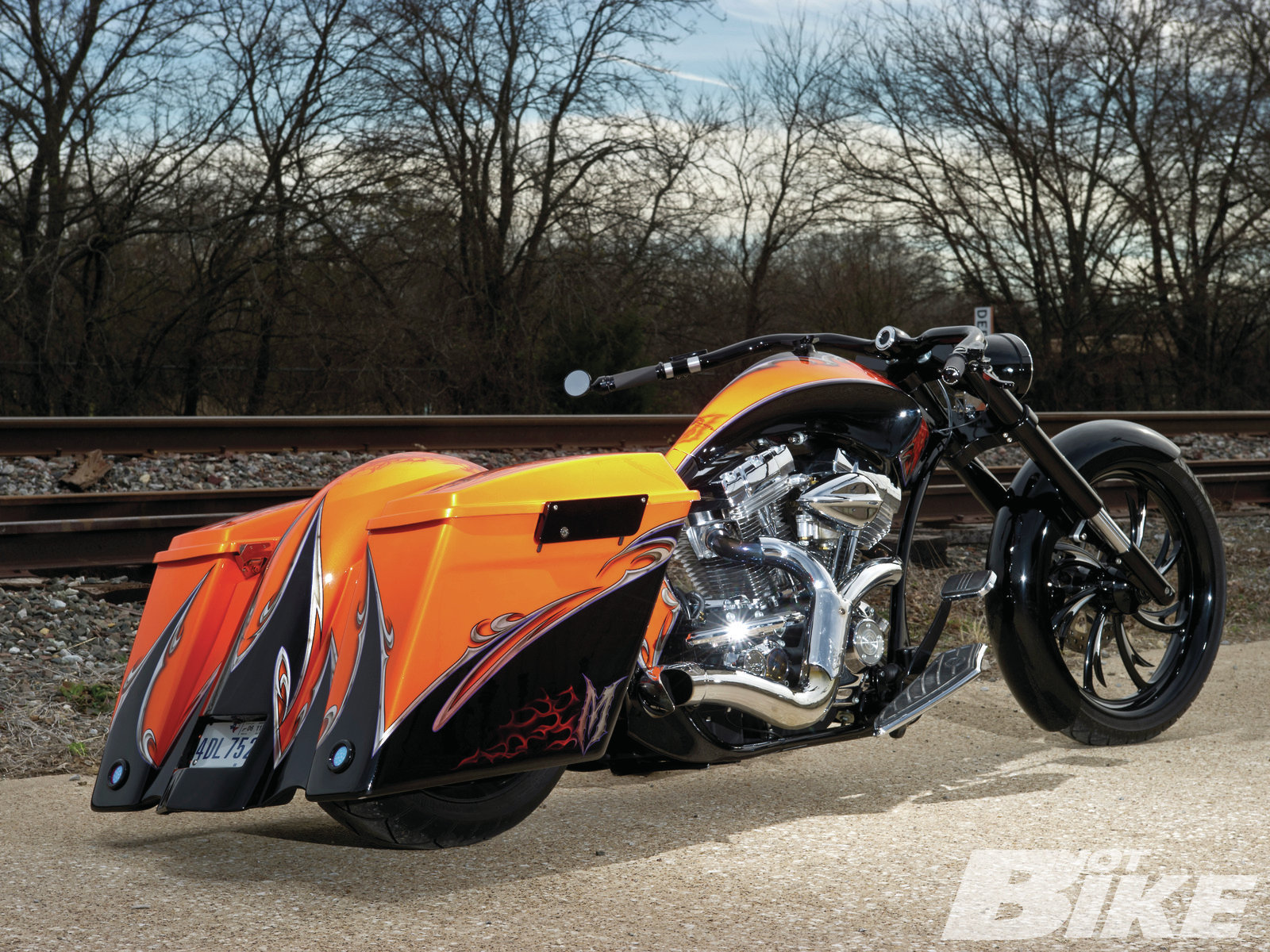 I never thought I’d be down with this bagger thing. I was convinced they were for old men. But when you get your girl on the back of one she never wants to ride on the back of a chopper again. And then you quickly get spoiled by the comfort and ridability.” These were the comments Joe Martin of Martin Bros. Bikes made when we asked him how he made the transition from wild choppers and pro-street-style bikes to the raked and slammed bagger you see here.

If you’re not familiar with Joe and the wicked bikes that have been blasting out of the Martin Bros. shop, then you need to pull our head out of the sand. Not only has the shop’s amazing creations graced the pages of HOT BIKE over the years, but they’ve also burned up the TV screen winning numerous accolades when chopper shows were all the rage.

As the old saying goes: “The more things change, the more they stay the same,” and while the high-end chopper scene and all the biker build-off hype may have died off, Martin Bros. still continues to stick to its style and churn out sick rides. However, now the majority of its bikes consist of saddlebags and fairings.

“I was real resistant to this whole bagger thing. I didn’t think I would be able to incorporate my style into it. I was afraid it wouldn’t be cool or look right,” Joe states. All you have to do is compare this long and low bagger to any of the other bikes Martin Bros. has built, and you can definitely see distinct similarities in style and finished detail.

Working with his buddy, Craig Ragle , who has a knack for sourcing wrecked, repo’d, or theft recovery bikes from local auctions, Joe went in on an ’08 Street Glide that was completely totaled. And while Joe and the shop had been lightly tiptoeing into the bagger scene by doing some slight frame mods and sheetmetal work, this bike would become the shop’s first foray into a full-frame, ground-up bagger.

“The bike was mangled beyond recognition, but amazingly the engine and trans were in good shape,” says Joe. “It started on the frame jig with just the motor and trans, and I built around it not knowing what stretch or rake I wanted. This was the perfect platform for me to build because the outcome was unknown. I just wanted something that would showcase a touring bike for me and not just be a bundle of the latest and greatest bolt-on parts. I wanted to put a Martin Bros. twist to this style of bike.”

Working off a sketch he drew up with a much larger front wheel, Joe began cradling the motor with round stock steel tubing. He spent hours bending the tubes and holding them in place or hovering atop the engine with some mock handlebars in his hands trying to get just the right lines for the frame. In the end he came up with arching downtubes, 42 degrees of rake in the neck, and 6 inches of forward stretch to give the bike a long and low profile. A Mean Street frontend with an additional 7 degrees of rake in the trees was used to push the front wheel out even further, and the large-diameter wheel from the drawing was ditched in favor of a 21-inch wheel from Pickard USA. Out back Joe used an 18-inch Pickard wheel wrapped in a 150mm Metzeler. To get the bike to sit lower than stock, Joe welded some new shock mount bungs below the stock bungs on the H-D swingarm, then installed a Legend Air Ride system.

Sleek sheetmetal is one of the key identifiers on a Martin Bros. bike, and this bagger is no exception. The front fender is a tight-fitting 1/2 wrap, and the rear fender is a one-piece steel unit with many hours of work in it. “The frame was tough, but the rear fender was just as hard because it’s all one piece, so it took a lot of work with the air hammer and English wheel to get it straight and shaped just right. Then I had to reinforce it so it wouldn’t flop all over the place,” Joe states. As for the gas tank, Joe shaped a tank that would sit low on the backbone and featured dished, tapered, and stretched side panels that would flow into the narrowed seat pocket. Joe added some extra attention to the tank by incorporating a peaked spine. Originally he wanted to stick with the EFI setup the Street Glide came with, but after realizing the wiring was junk and that mounting a fuel pump in the tank wouldn’t quite work with the fuel tank design, Joe ditched the EFI and converted the bike to a carb setup. Instead of fabricating a new fairing for the bike, Joe decided to keep more of a Road King look with just a set of H-D saddlebags that were purchased off of eBay. To allow the bags to flow with the rest of the bike, a set of Klock Werks saddlebag extensions were incorporated to the bottom of the bags.

“While we’ve worked on modifying various other bagger projects, this was our first completely ground-up bagger build. And the bike we started with was in the worst condition we’ve ever seen, but it all worked out for the best because it turned out to be one of the best daily riders we’ve ever done.”

After the sheetmetal was finished and the mockup was complete, the skin was taken into the paint booth where Shorty and Joe sprayed the black and pearl orange basecoats, then Joe hit the skin with an airbrush and went to town laying down a series of his signature skulls.

While he initially might have been opposed to the whole bagger trend, the end result of Joe and his shop’s first ground-up bagger is exactly the badass bike we’ve come to expect from them. And it appears there’s no slowing down as the Martin Bros. has about eight more bagger projects in the works ranging from simple sheetmetal to ground-up projects like this. “While we’ve worked on modifying various other bagger projects, this was our first completely ground-up bagger build. The bike we started with was in the worst condition we’ve ever seen, but it all worked out for the best because it turned out to be one of the best daily riders we’ve ever done,” Joe comments. With its low center of gravity, extended wheelbase, and modified rake and trail, it’s very stable at high speed. It does have a wide turning radius, but it’s nothing like riding the choppers we’ve built. And it seems like this bike has more soul to it with its tragic past.” HB

A Day In The Life Of Arlen Ness