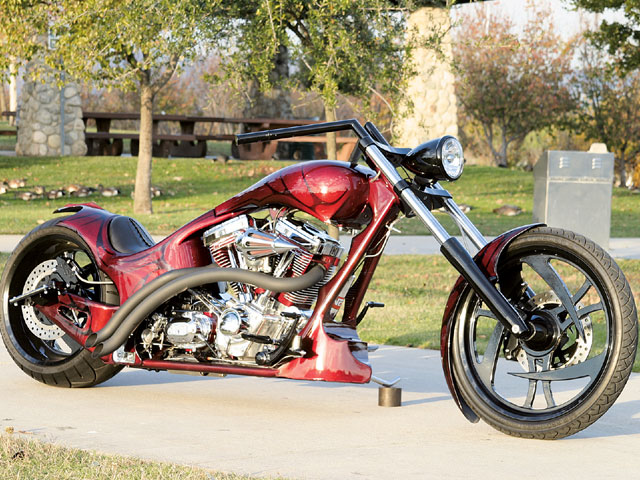 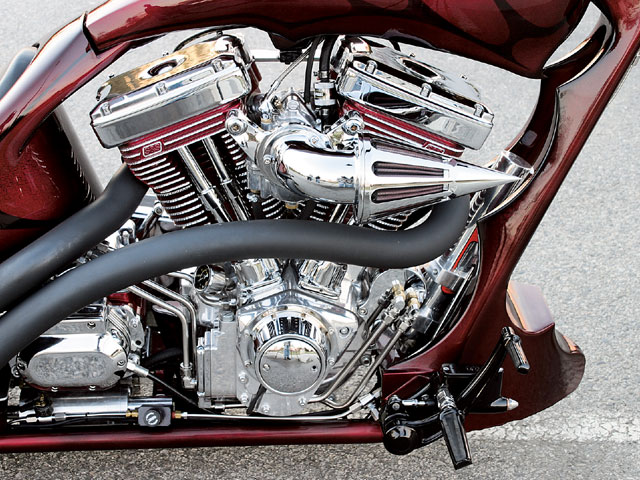 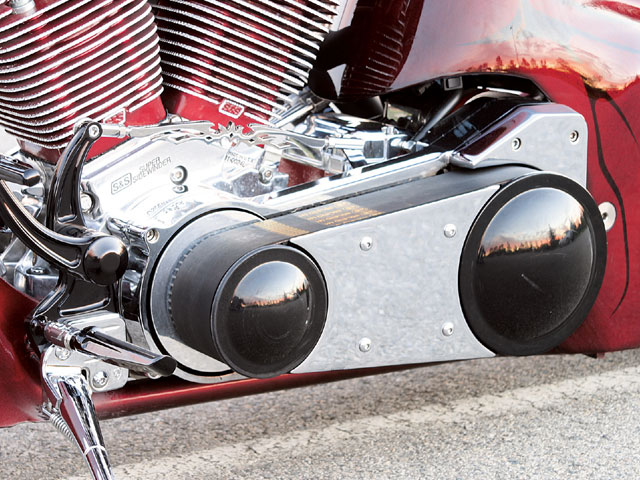 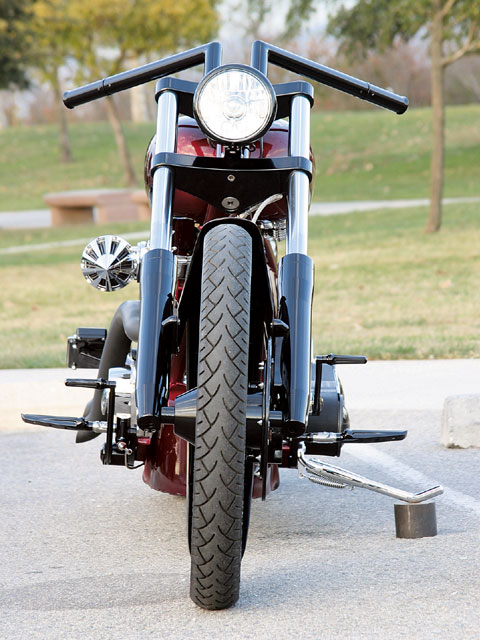 When you’ve been in the automotive customization and painting business for many years, sometimes you look at your two-wheeled counterparts with a bit of jealousy. Just from a size and space aspect, thinking about working on a bike versus a car can make even the sanest car guy want to try his hand at building a motorcycle. After all, the sheetmetal on a bike is about a quarter-panel’s worth of steel on a car, and the motor is right there in front of you, not hidden beneath a hood and yards of hoses and wires.

John C. and George of 5150 Customs in Van Nuys, CA, decided to give it a go by building a clean bike that would showcase their talents within the motorcycle industry. They usually cater to high-end auto enthusiasts, customizing cars for the L.A. crowd. They wanted something understated and clean, a bike that could just as easily be looked at as ridden. There were no drawings or plans for the build; it basically came together as an evolving project. Unwilling to build a frame from scratch, the duo chose a War Eagle Pro-Street frame and swingarm for the basis of the chassis. They stretched the backbone out 5 inches while extending the neck rake to 48 degrees. The Softail-style frame would be transformed with dozens of hours of molding, finessing, and painting to produce clean, finished lines. For a balanced look, a chin spoiler was added to the bottom of the dual-downtube frame. In addition, both downtubes received a scalloped design that extends along their length.

Before finishing the rest of the frame, the pair hand-made a stretched gas tank with a dropped tunnel inside so the tank sits barely above the frame’s backbone. The sides of the tank were given the same scalloping treatment as the downtubes. The lines of the stretched tank flow into the seat-pan area of the bike, providing a clean, gentle contour. This theme continues with the molded side panels that cover the oil tank and electrics. Here’s where the fabrication skills of 5150 really take off. The rear fender, wraparound side covers, and seat pan are all one seamless piece. To add more distinction to the sheetmetal, the rear fender was cut out in the shape of a devil’s tail, coming to a point above the 240mm low-profile Metzeler. The rear fender can be slammed against the tire with the push of a button, thanks to a Legend Air Ride suspension system hidden beneath the frame. A front asymmetrically shaped steel fender was bolted between the 5150 lower fork legs that extend through a set of Hawg Halters triple-trees. An 80mm Metzeler was used to tie it all together on a custom-made rim.

Speaking of wheels, the rubber rides on a set of one-off billet wheels. The three-spoke design, mixed with a tribal theme, has flowing spikes that intersect each spoke, making it appear to be spinning while sitting still. In the rear is an 18×8-1/2-inch unit, with the front a 21-incher holding the narrow tire. To further 5150’s creative agenda, the brake calipers and rotors were produced in-house. Floating rotors, attached to CNC-machined carriers, match the pattern of the wheels, while braided stainless hoses carry brake fluid to each caliper.

Power for the bike comes from a 107ci S&S; EVO-style motor that breathes through a sinister-looking intake and expels the spent gas through a set of black, curved Matt Hotch Designs pipes. If that weren’t enough, an NOS nitrous system was added to provide some extra combustion oomph when needed. A BDL open primary transfers the motor’s force through a JIMS tranny, ultimately feeding a secondary belt and pulley.

The bike sports a minimal look and feel, having no cables, lever, mirrors, or gauges sitting on the custom 5150 handlebars with integral risers. Instead, a twist clutch mechanism resides inside the left handlebar. Twisting the grip operates the hidden clutch cable. Rolling on the right grip gets the bike moving. Both the front and rear brakes are actuated by PM foot controls that feed a proportioning valve to give just the right amount of juice to the front and rear calipers. A blacked-out Arlen Ness headlight illuminates the way at night, while an LED taillight is integrated into the license-plate mount. Even the seat got the special 5150 treatment when it was covered with rare snakeskin.

The clean look of this bike and uncluttered cockpit area always solicit the same response from people, who wonder when the bike’s going to be finished. John and George give that knowing smile and take the uninitiated on a tour to highlight all the hidden and trick parts they made on this scoot.

The Indian Scout continues to make a name for itself in the world of motorcycle racing. Ridden by GP rider […]

Normally I’m not too fond of writing up rolling business card bikes. One editor even called them “big ad whore […]