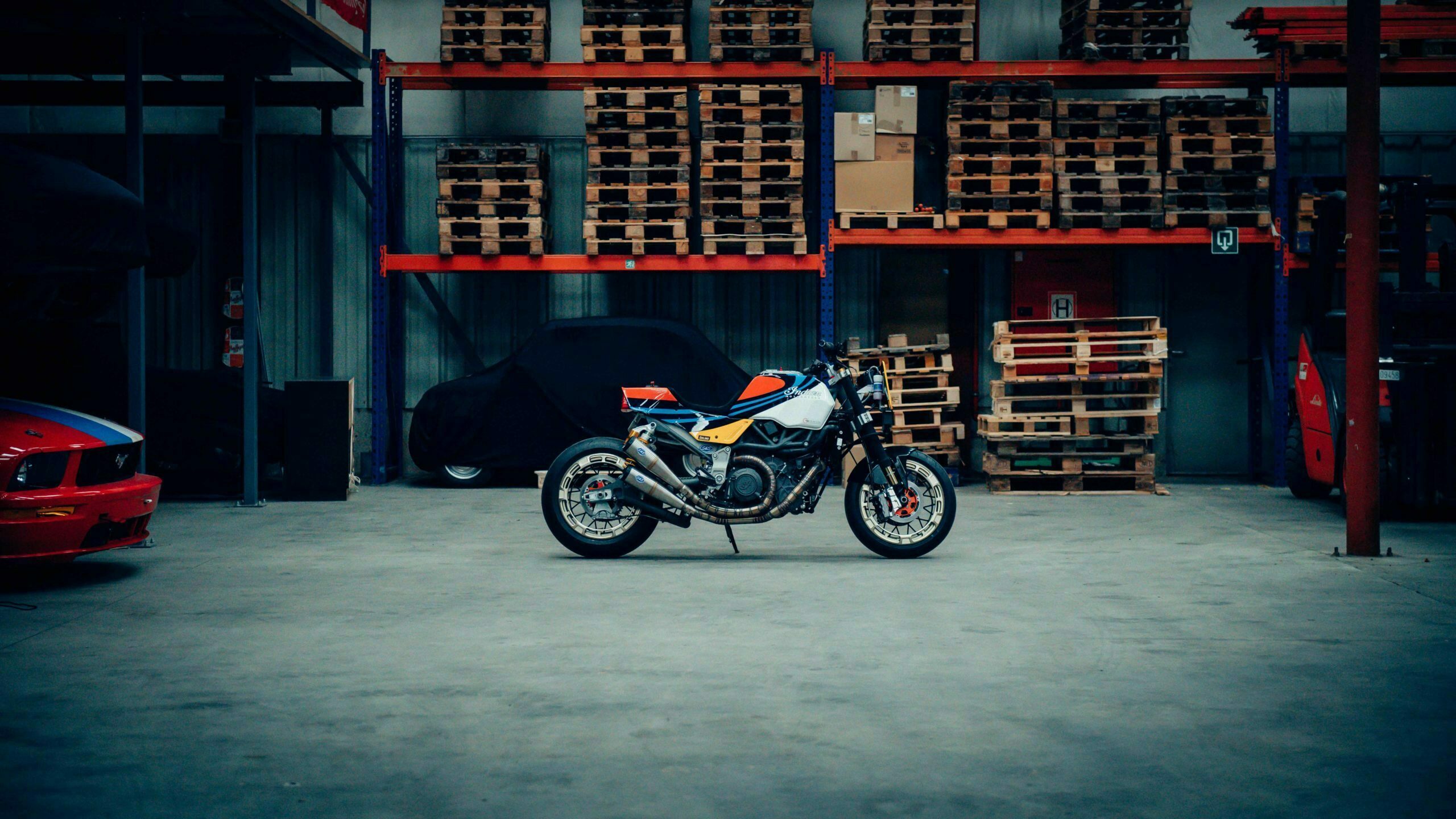 Indian Motorcycle and Workhorse Speed Shop teamed up to build this retro spin on Indian’s versatile FTR1200 platform with the Indian FTR AMA, a bright and imposing motorcycle with a ’80s edge. The FTR AMA is the first of two long-anticipated Indian FTR builds by Brice Hennebert.

Well known for his unique creations, Brice was commissioned to create two very special FTRs, Black Swan and the FTR AMA. While Black Swan is yet to be revealed, it was the commissioner of Black Swan who asked Brice to design a second build for his brother. “The brief was pretty open, something colorful and as sharp as a war tank. The only restriction was that the paint be inspired by the Martini Racing livery. After some research and brainstorming with myself, I based the look around AMA SBK racers from the 80s and the Rally cars from the same era. The main influences were the Lancia Delta HF mixed with Bol d’Or 750s and some muscle bike DNA,” said Brice.

Starting work in early February 2021, Brice’s first decision was to retain an upright riding position, something close to the original FTR and using the original handlebars. From there, a lot of changes were about to happen.

“While Black Swan was a clay shaped build, I decided to go in another direction in terms of design process with this bike. I used direct CAD design based on a 3D scan of the FTR chassis. Then, all the body parts were 3D printed and reinforced with carbon fibre.”

The 3D printed front plate houses a PiAA race light and supports the Setrab oil cooler beneath. Nestled behind the front plate sits the OEM dash from the new Indian Chief, a design more in keeping with the retro racing mood, but with all the options of a modern machine, such as phone connection and charging. 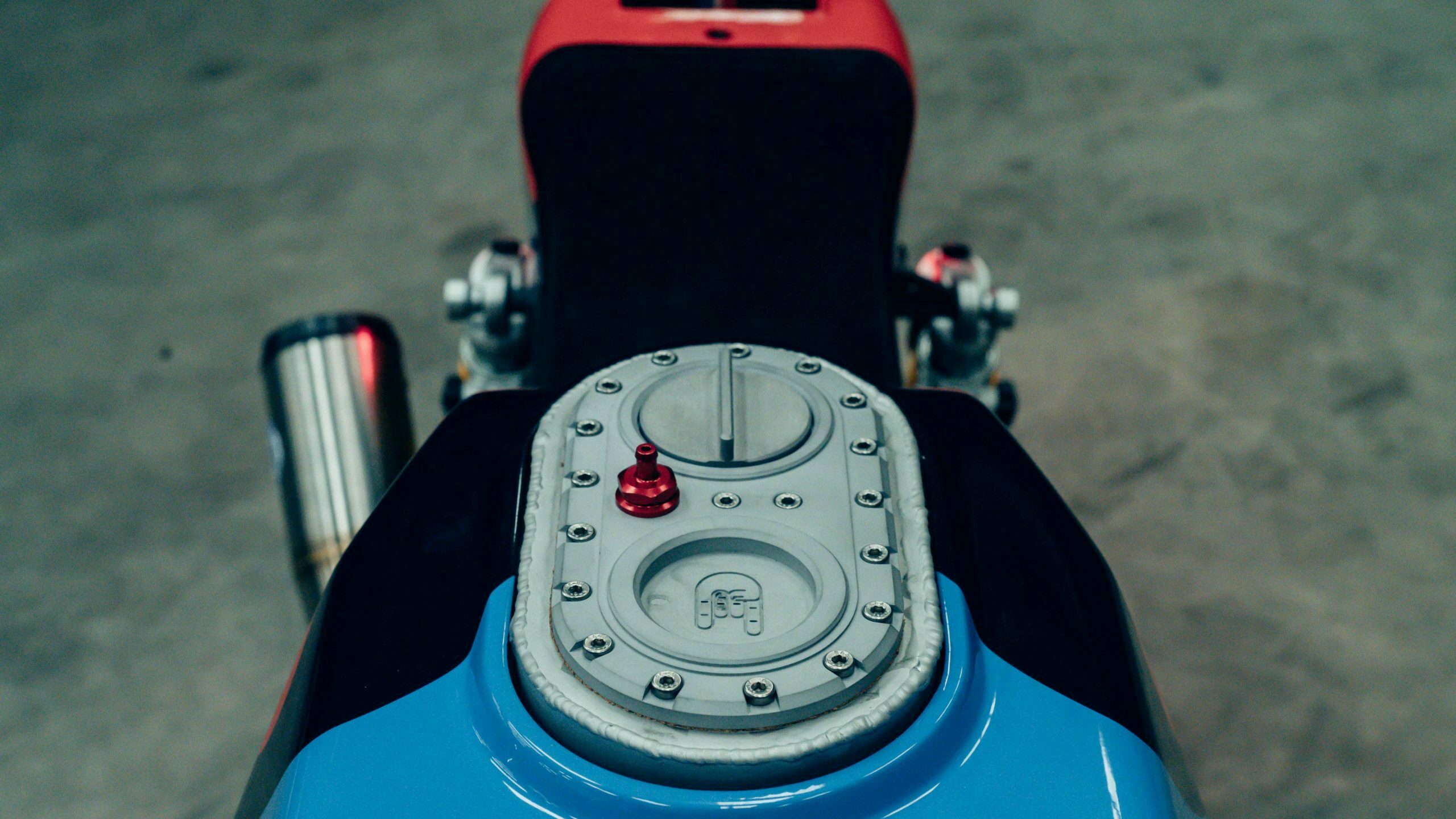 The printed module that incorporates the seat pan and taillight is also the battery holder, the battery having been moved into the rear as nod to endurances bikes. With the saddle upholstered in a smooth brushed leather by long-time collaborator, Jeroen from Silver Machine, the tail section is complemented by an old school taillight adapted to take LEDs

To accommodate the DNA performance air filters, the intake was redesigned and 3D printed, while two aluminium fuel cells were fabricated to fit the new bodywork, one under the tank cover and the other hung under the seat unit. Connected by AN10 connectors, the capacity matches the 14 litres of the original bike.

The chassis plates were redesigned for a more race-like look and machined from Brice’s CAD designs by Vinco Racing in Holland. Vinco Racing undertook all the machining on the project including the swingarm components, braking brackets, yokes, fuel cell components, the front brackets for oil cooler and more. 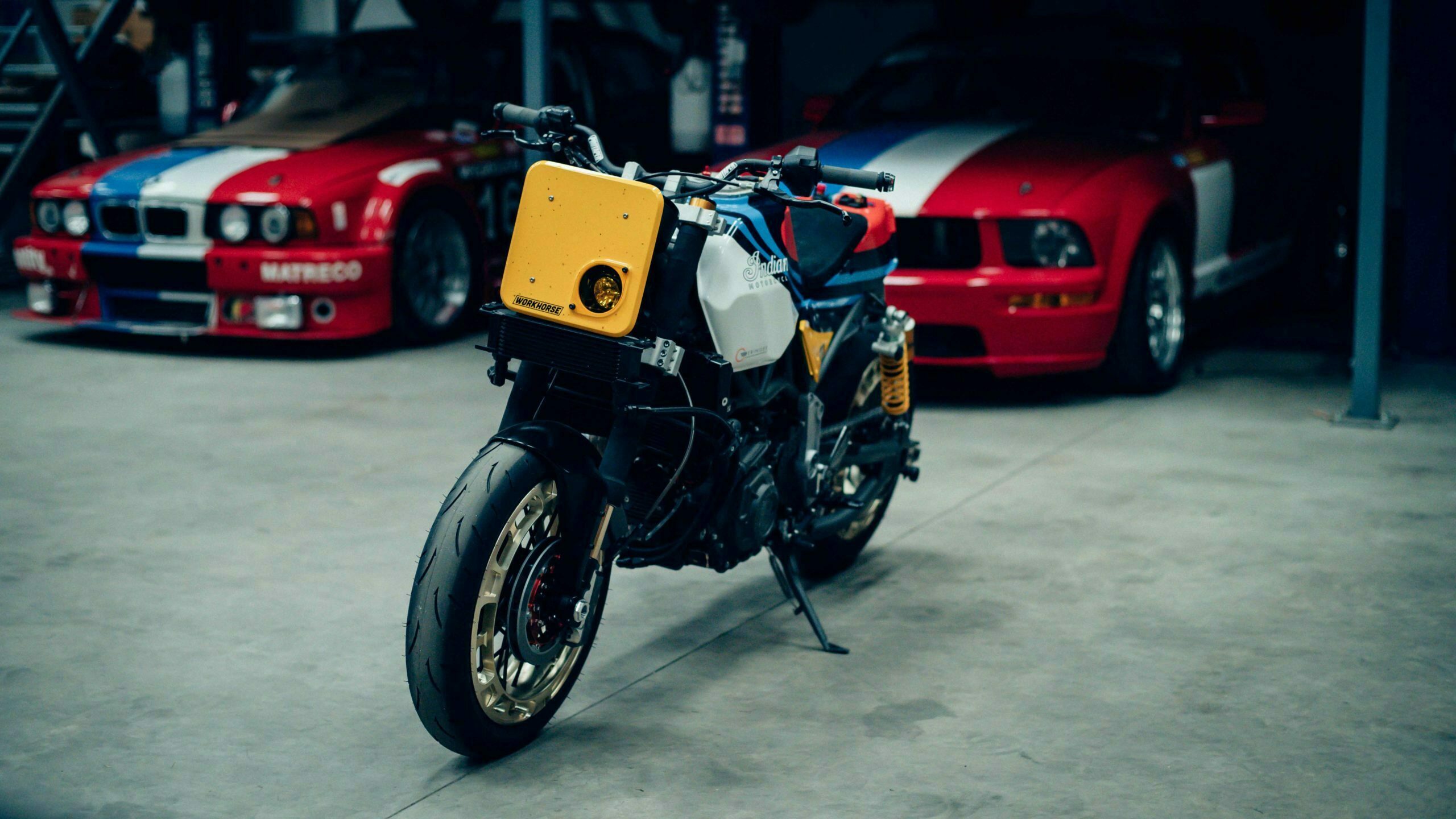 The fork yokes are replicas of Bol d’Or 750cc yokes adapted to the 43mm Öhlins forks. And at the rear the tail section was modified to use twin piggyback Öhlins shocks mated to a bespoke swingarm built from 7020 aluminium Tubes. The swingarm design was inspired by the same era and is 40mm longer compared to the original with a 3D printed chain slider protecting the tubing. 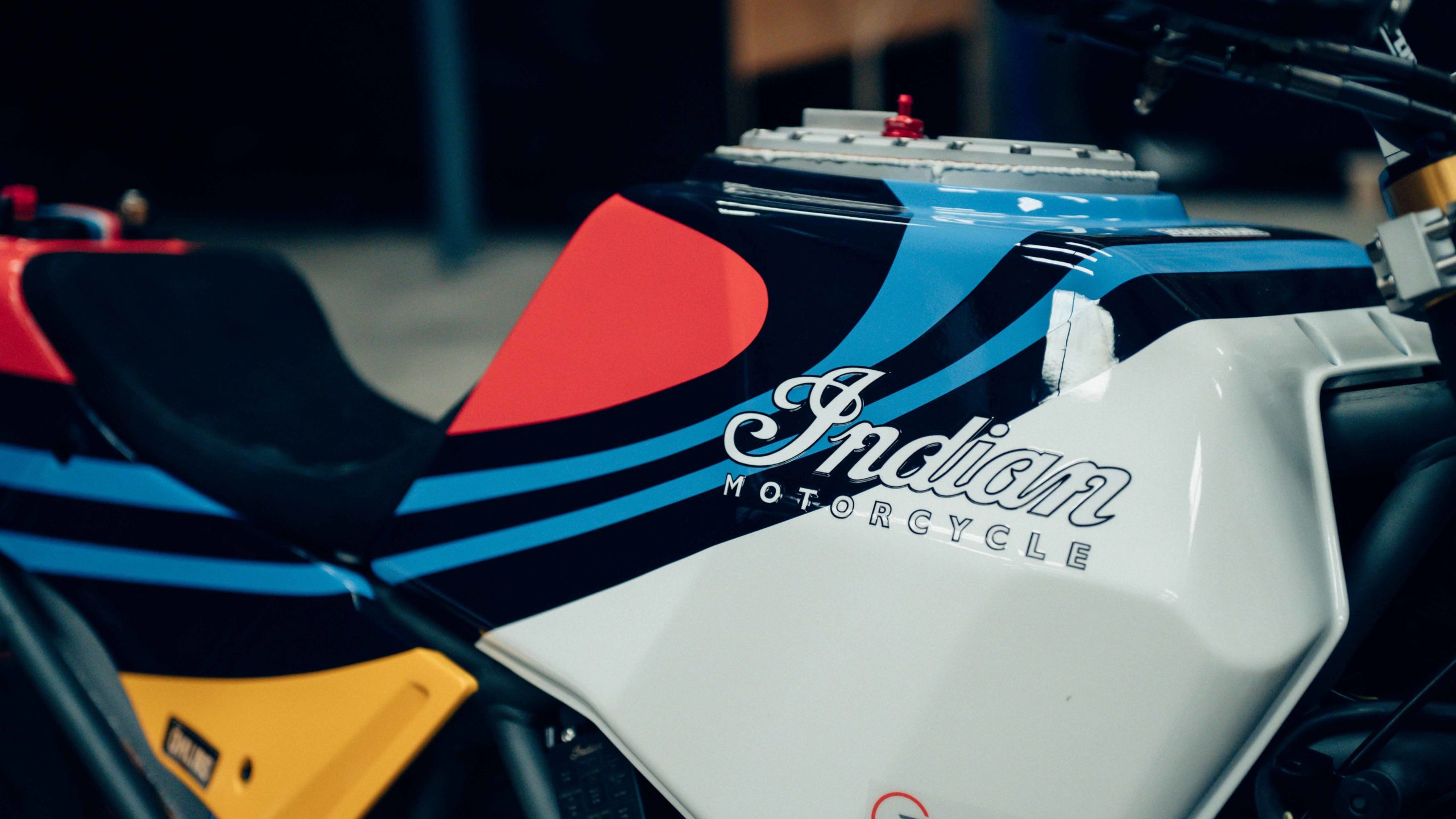 “The wheel set is a total eye catcher. I collaborated with Fabio from JoNich Wheels in Italy, the design is based on his Rush wheels, machined from billet aluminium, but without the carbon flanges. The design makes me think about the turbo fans wheels used on the racing Lancia. So that was a perfect choice for me. They are completed by a Dunlop GP tyre set with this mad 200 rear tyre.”

Clearance for the Indian FTR AMA braking system was a concern with these wheels, so Brice called on another long-time collaborator, Etienne at Beringer Brakes. 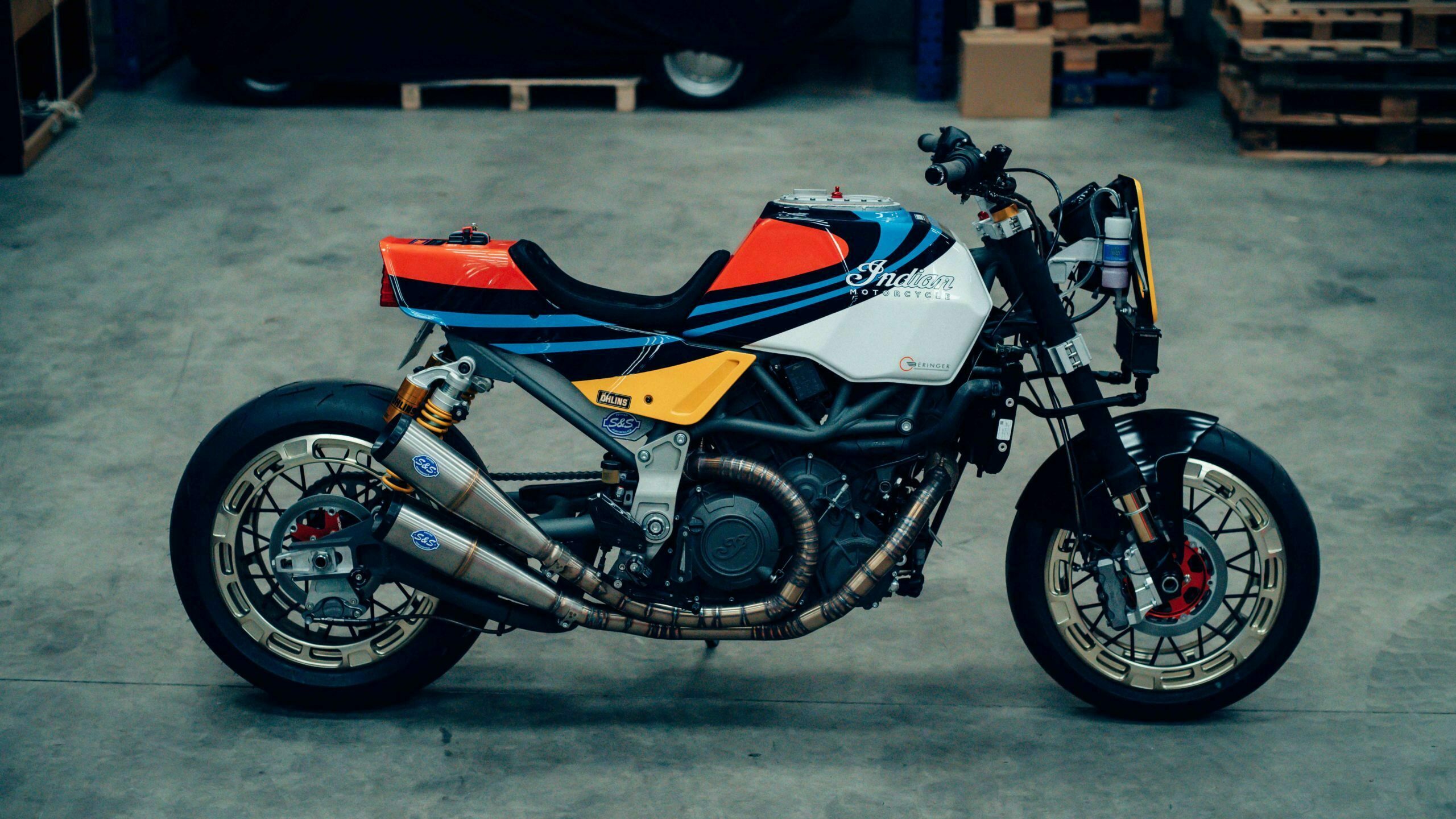 “I called Etienne to get their 4D braking system the same system I used on Appaloosa. Etienne is always motivated for technical challenges. So, we played with different colours on the components to work with the AMA mood. And then, because I removed the ABS module, I had to find another way to get the speed signal on the bike and the solution was a Motogadget Moto Scope Mini.”

To create the swoop of the exhaust, it was fabricated from stainless steel pie cuts and beautifully welded together, capped off by a couple of modified slip-on S&S Cycle Grand National mufflers.

“The amazing paint job designed by Axecent in Japan has been applied by my friend Fabian who’s near to my workshop. This build is aggressive, massive and a real pleasure to ride. I had a lot of fun testing this ride.”

To see Indian’s original FTR 12o0 Custom prototype when it was released back in 2017.

Roehr Motorcycles, owned and designed by Walter Roehrich, recently released this 1250SC, which is powered by a Harley-Davidson V-Rod engine. […]

The Cannonball Golden Ticket could be yours!