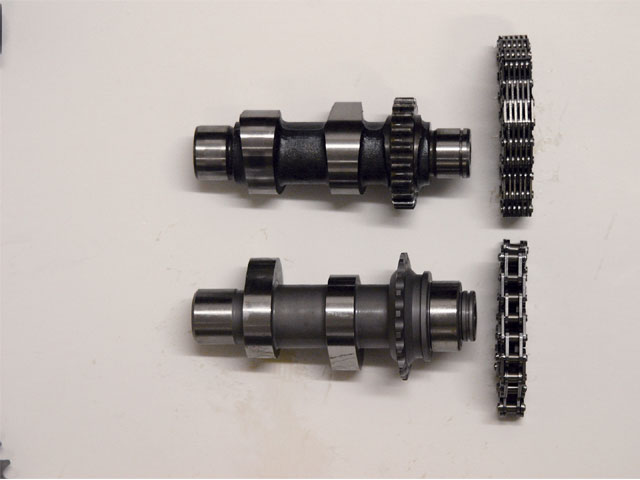 On the top is the old-style Hyvo chain and camshaft. As you can see, the chain consists of multiple plates and rides on a wide sprocket on the cam. Both ends of the cam are the same diameter. On the bottom is the new roller chain along with one Andrews conversion cam. On the case side of the cam (left in this photo), the diameter is 0.875 inches to fit into the existing cam bearing in the case, while the outer diameter of the cam that spins in the cam support plate is larger. On the left is the cam support plate out of the ’00 Twin Cam, complete with two bearings along with the cam chain tensioner still attached. On the right is the new H-D cam plate that features new oil passages and the absence of any bearings. The cams spin on a thin layer of oil within these bores. If you look closely, you can see the differences in oil passages between the old style and the new. 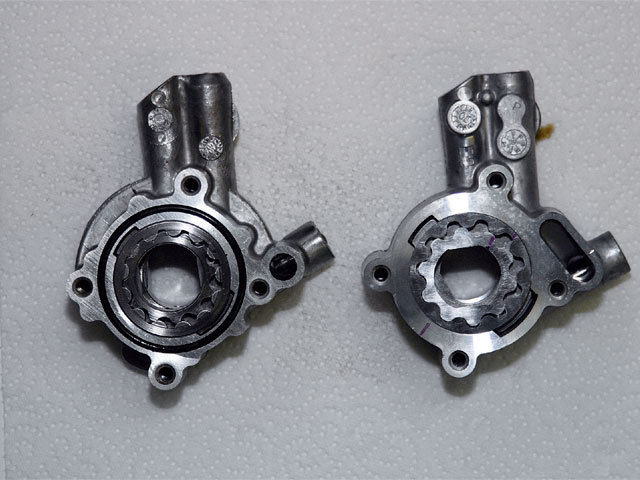 Here are the oil-pump assemblies, with the old style on the left. Oil passages are different between the two parts that mate to the cam support plate. In addition to the absence of the O-ring on the new style the gerotor size has been increased in the new pump. When operating, these gerotors are the means by which the oil pump moves oil through the system. Oil gets trapped between the inner and outer gerotor and essentially carries it between the “spaces” as the two gerotors spin together. 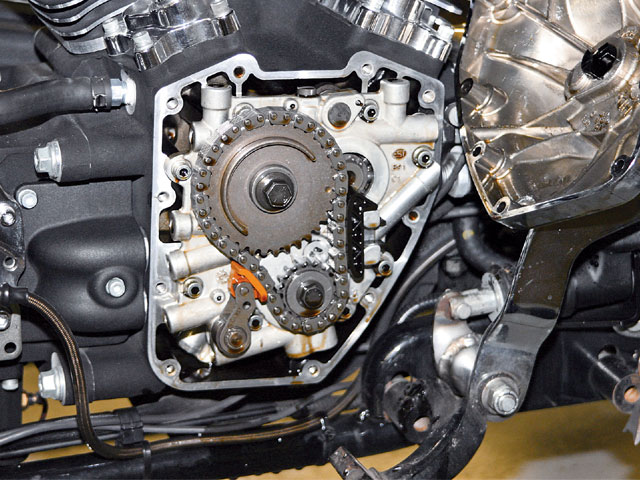 After removing the cam cover, the rear camshaft drive sprocket (on top) connected to the crankshaft sprocket via the Hyvo chain can be seen. 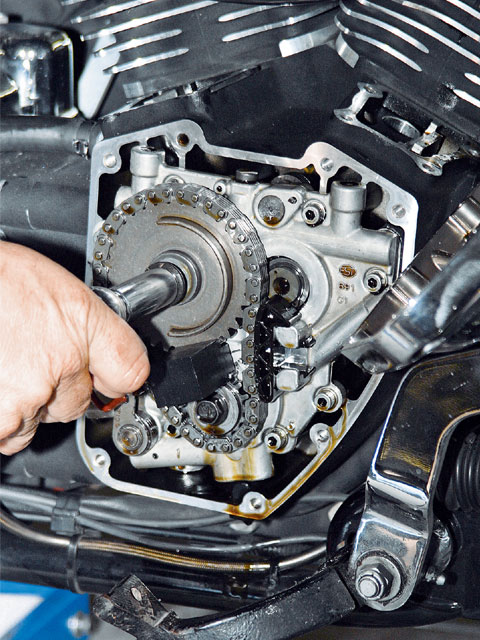 We then disassembled the rear camshaft drive sprocket with the help of a crankshaft sprocket lock tool placed between the sprockets. This prevented their rotation while we loosened the fasteners. The new oil pump was bolted to the back of the cam plate, and then the new cams were simply slid into their respective bores in the cam plate, then attached together on the backside with a roller chain. 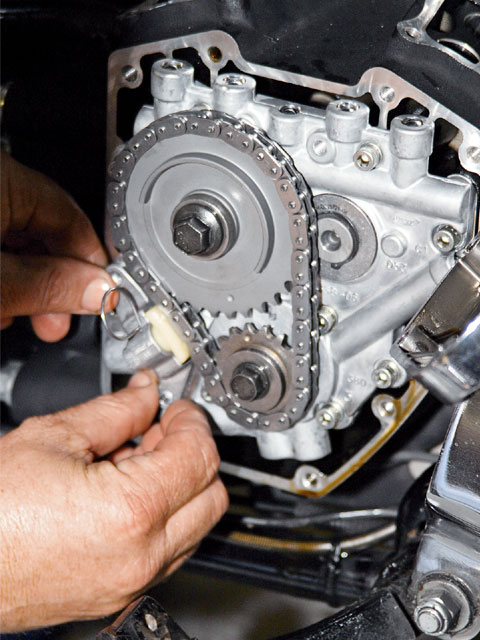 After attaching the new rear camshaft sprocket and crankshaft sprocket, the roller chain was placed around the sprockets and the bolts tightened to spec. This was followed by attaching the spring-loaded hydraulic chain tensioner to the cam plate.

Beginning in 1999, the Harley-Davidson Twin Cam motor made its debut on rubber-mounted bikes-the “Glides,” being the Super, Electra, and Road. The following year, a counterbalanced Twin Cam engine found its way into the solid-mount Softail line. This event relegated the venerable single-cam Evo motor to the H-D history books alongside the shovelhead and panhead.

Besides the addition of a second cam, the camshafts were now driven off the pinion shaft via sprockets and Hyvo chains (so-called “silent” chains) instead of through gears the way the Evo had been. One chain (on the outside of the cam plate) connected the crankshaft to the rear cam via a sprocket, while the front cam was driven off the rear cam, with the secondary cam chain located on the inner surface of the cam plate. Cam chains were kept taut with spring-loaded cam chain tensioners made from Dupont Vespel. Both camshafts rested in 0.875-inch-diameter bearings that were pressed into the case, while the other end of the cams spun in bearings attached to the cam support plate.

For the most part this system worked pretty well, though there have been reports of failure of the cam chain tensioners, which led to various cases of engine problems. The problem (if you want to call it that) seemed to be haphazard, as there were bikes with only 5,000 miles with worn tensioners and also bikes with 75,000 miles with barely any wear at all on the tensioner shoes. Maybe it was a case of variations in the manufacturing of the shoe material, or how the tensioners were installed (we’ve heard that letting the tensioner snap hard against the chain during installation may reduce the integrity of the Vespel material), or maybe the chain itself had deviations, sharp edges, or tight spots that caused premature wear in the tensioners. Even how you ride may have an effect-throttle-whackers and aggressive downshifting puts more stress on the valvetrain. This may have been exacerbated with the “inverted” tooth design of the wide Hyvo sprockets.

With the ’06 model year, H-D launched the new Dyna Glides, which featured a completely redesigned camshaft system. Roller chains and sprockets that are similar in design to a drive chain and traditional sprocket replaced the Hyvo chains. Instead of spring-loaded tensioners, the new units use hydraulically activated tensioners that operate in a similar fashion to a lifter (tappet). The two case bearings were increased to 1-inch diameter, and the cam plate no longer contained any bearings. Instead, the camshafts rotate in well-lubricated aluminum journals. These plain cam bearings were designed to reduce complexity, run more quietly, and increase durability. Perhaps the greatest improvement comes from a redesigned oil pump, residing in a new cam support plate, that provides 10-percent more oil flow while adding 23-percent scavenging ability. This is a good thing, as the bike’s lifeblood gets into the motor faster while removing power-robbing oil more quickly from the crankcase. Due to the aforementioned changes, new, lighter camshafts were also employed.

In typical Harley-Davidson fashion, it turns out that the ’06 Dynas were the testbed for things to come. All of the ’07 Twin Cams now have the same cam components that debuted on those Dynas. As of press time, H-D doesn’t offer those ’06/’07 parts to retrofit earlier Twinkies. We don’t know if they will, but Andrews Products has designed cams and other integral parts to combine with factory H-D parts to convert any Twin Cam into ’07 specs.

We opened up an ’00 Electra Glide to install Andrews’ new cams combined with H-D’s new oil pump, cam support plate, sprockets, and chains. Follow along as we take you through the new parts and illustrate the main differences.

Saint Unbreakable Denim Vest Jeff Allen Over the past three years or so, this vest has seen thousands of miles […]