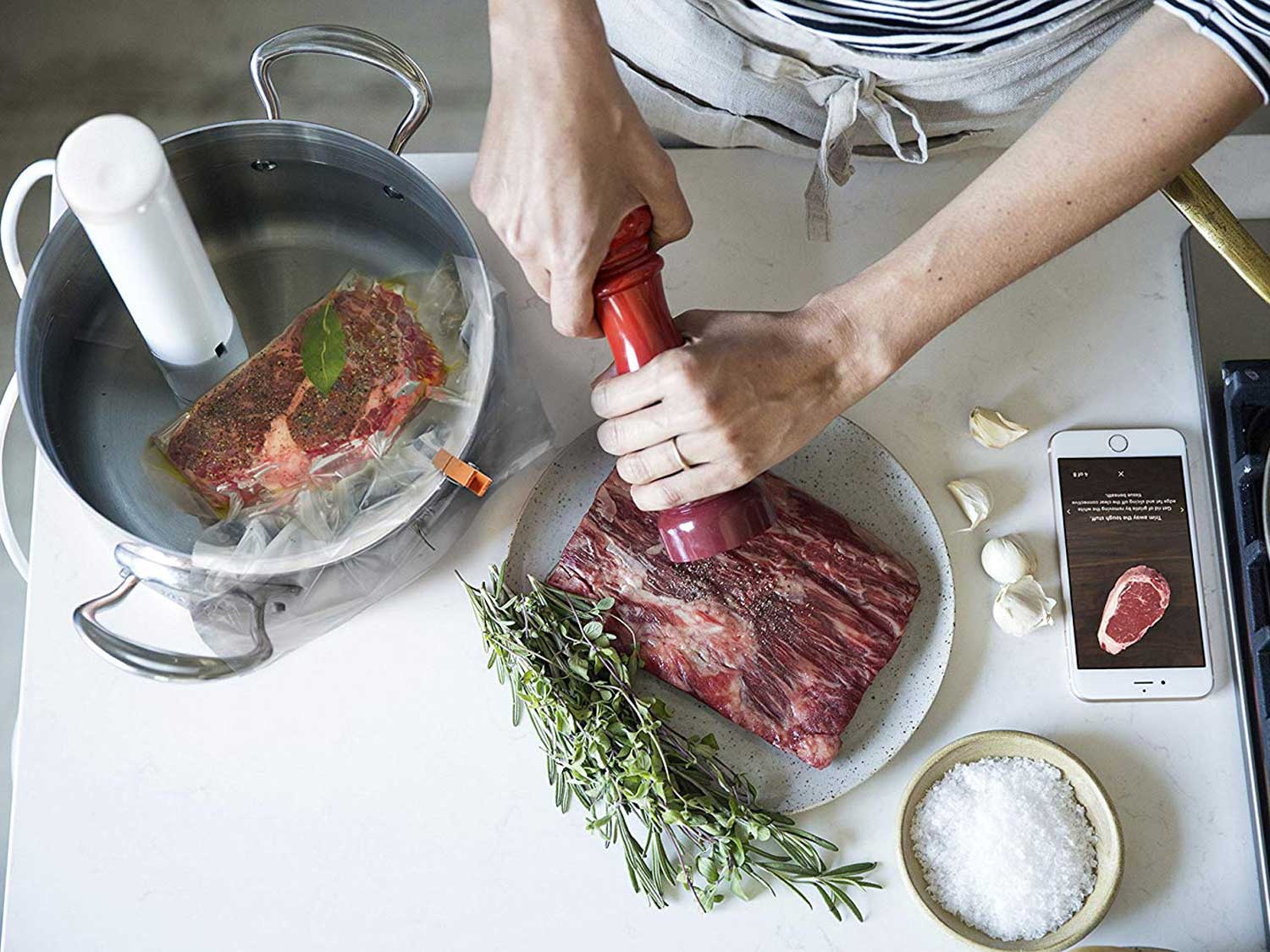 Sous vide immersion circulators take the guesswork out of cooking proteins and vegetables.

Obtaining a perfect medium-rare temperature on a steak is dependent on so many variables, from the thickness of the cut, to the temperature of the pan, and what the pan is made of. In short, it’s easy to overshoot medium-rare and end up with medium. Enter the sous vide. Sous vide is the easiest way—albeit longer—to cook anything to perfect doneness. Essentially, sous vide is a heating element that heats a water bath in which what you’re cooking is submerged in. The water bath heats your food, cooking it to whatever temperature it needs to be. This makes overcooking extremely hard to achieve, making cooking anything more forgiving. 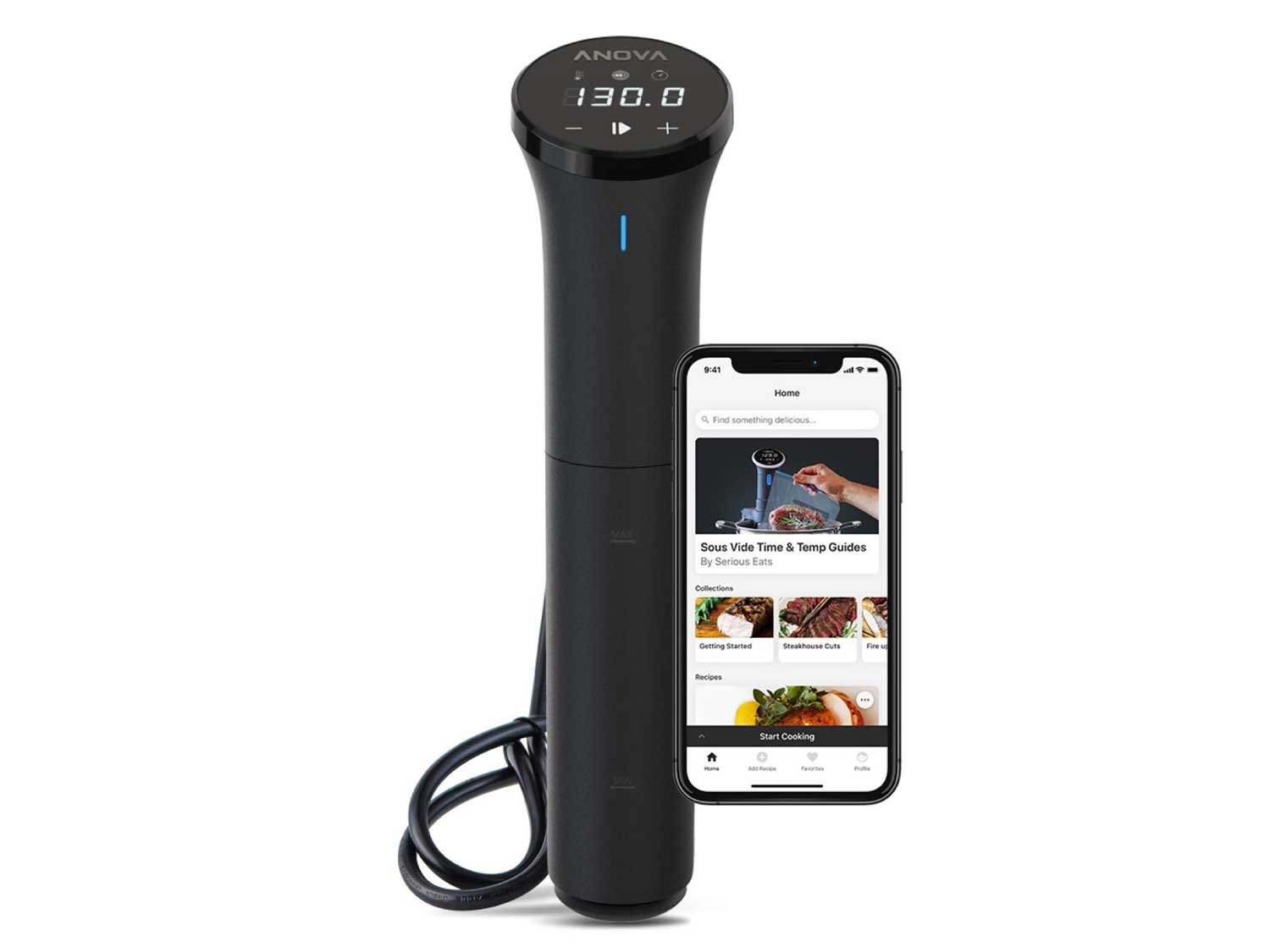 Anova is known for its sous vide equipment, easy-to-follow phone app, and its Nano is the company’s best option for people new to sous vide.

Anova has been building sous vide equipment for more than a decade, being one of the first to do so. This means the company has worked out most of the kinks and quirks that come along with sous vide preparation and cooking. One of its newest releases, the Nano, is also its smallest. The 750-watt sous vide immersion circulator is 12.8 inches long and is meant to stow away in drawers, perfect for apartments and those with limited counter space. The application hooks up to Wi-Fi and Bluetooth, giving you access to Anova’s library of recipes and cooking guides, all of which you can program your Nano with. You can start your cooking while you are away, and receive notifications, all from your phone. 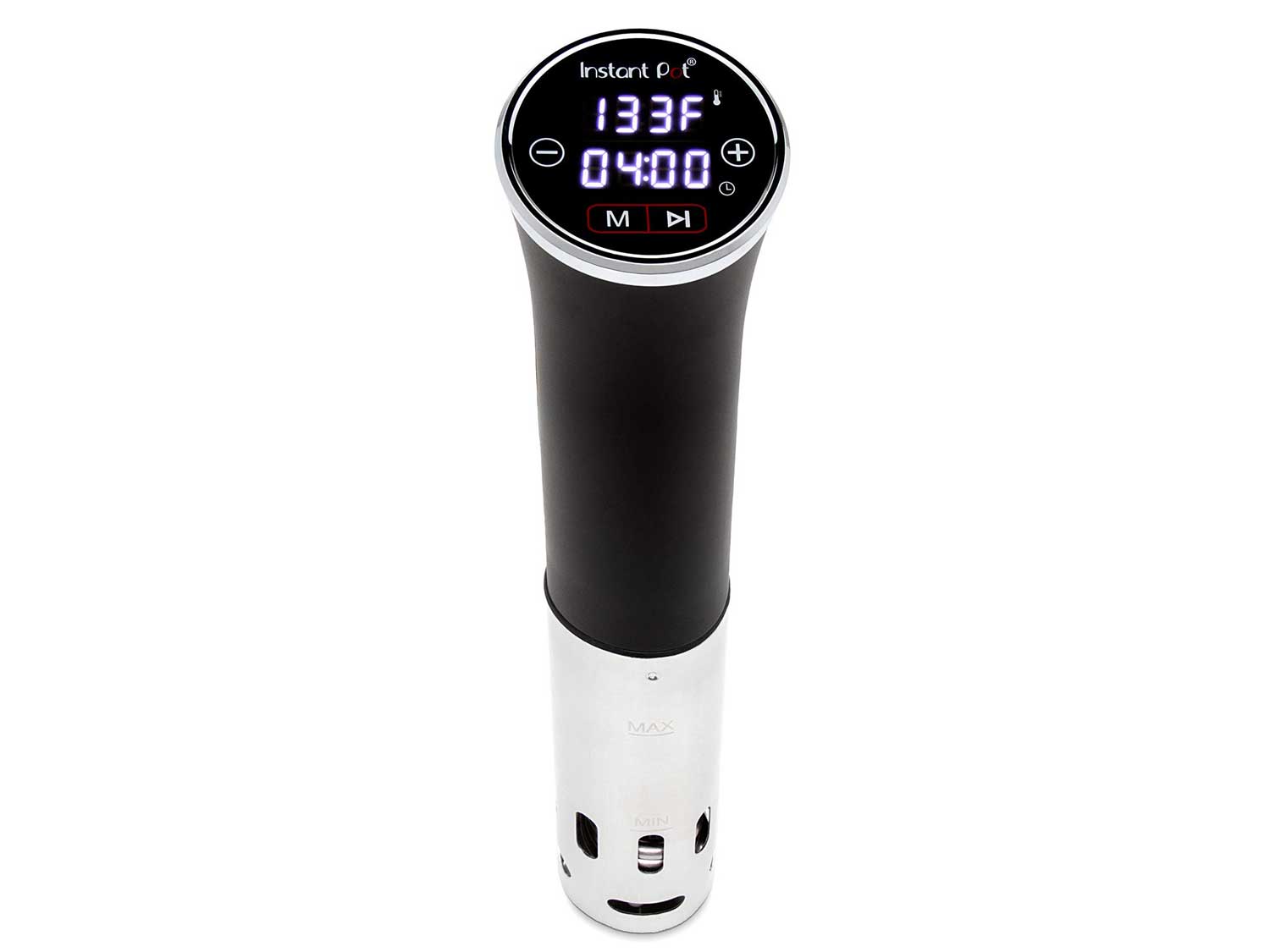 Not all kitchen gadgets have to be expensive.

Just because it’s a piece of kitchen tech, doesn’t mean it has to drain your wallet. The Accu Slim Sous Vide from Instant—the company that makes the Instant Pot—offers a budget option for those who want to start cooking with a sous vide. This 800-watt immersion circulator is 12.9 inches long, so it is also easy to store. It has an operating range of 68 to 203 degrees Fahrenheit with a maximum operation time of 72 hours. It does not have Wi-Fi or Bluetooth connectivity, so you have to set the sous vide manually and use the timer, but that is easily accomplished. 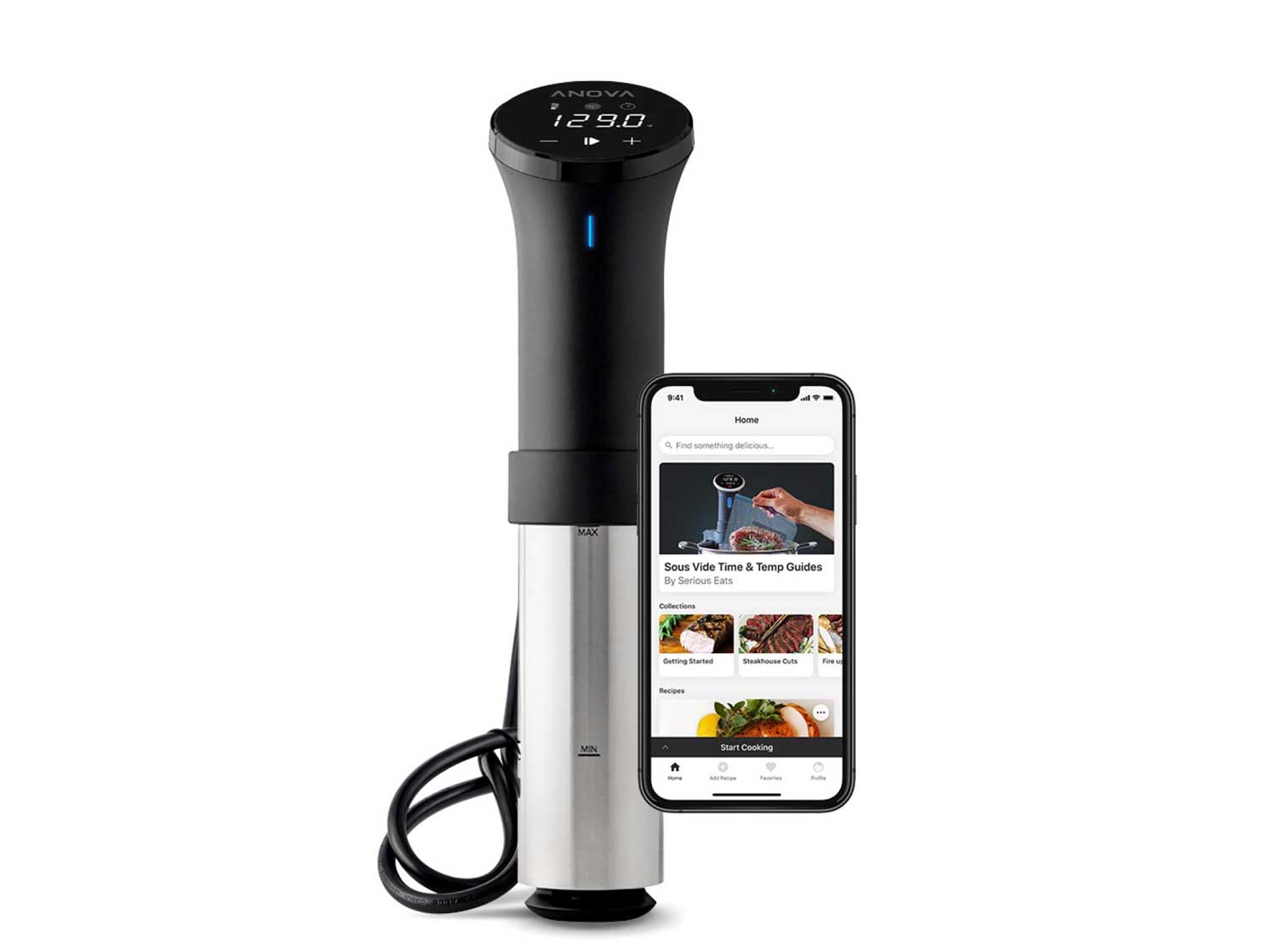 The Anova Culinary 1,000-Watt Sous Vide is the best if you plan to cook sous vide multiple times a week.

If you plan on getting into sous vide or want to upgrade your current immersion circulator, then the 1,000-watt sous vide from Anova should be at the top of your list. This sous vide is built to last, featuring a stainless steel removable skirt so that you can clean the inside of the circulator. Just like its smaller sibling, the Anova is Wi-Fi and Bluetooth enabled and works with the Anova Culinary app giving you access to recipes and cooking guides. An adjustable clamp means you can attach this to any pot or plastic bin, making it versatile and easy to break down and store. The entire unit is water-resistant, just in case. 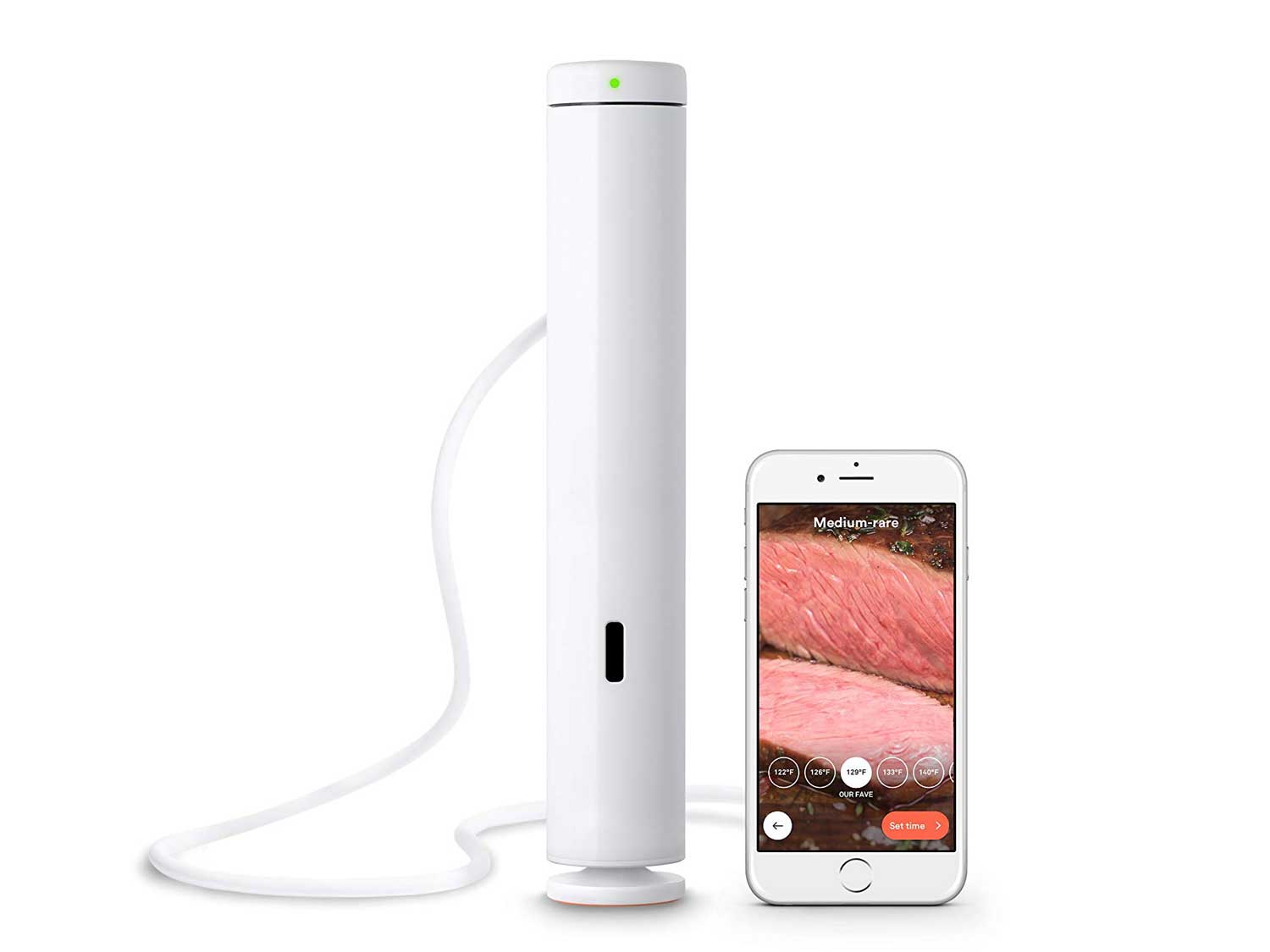 If you like where form and function meet, then the Breville Joule is a great pick.

Breville packed a 1,100-watt sous vide into a sleek and stylish 11-inch package, making the Joule attractive for its heating capabilities and aesthetics. The Joule is Wi-Fi and Bluetooth ready and can connect to Breville’s Joule app so you can cook from anywhere. The magnetic base on the Joule differs from other sous vide circulators that hook on to the edge of the pot. The base allows you to put the sous vide virtually anywhere in the water. Another advantage is that the heating element is close to the bottom, so it will work in shallower water. Now there’s no excuse for you to overcook any food ever again.

It won’t raise the roof but it will raise your bike. Courtesy of BikeMaster Maintenance on your motorcycle no longer […]

Used and Abused Cruztools Roadtech H3 Tool Set A great kit with many high-quality tools for the money, the H3 […]