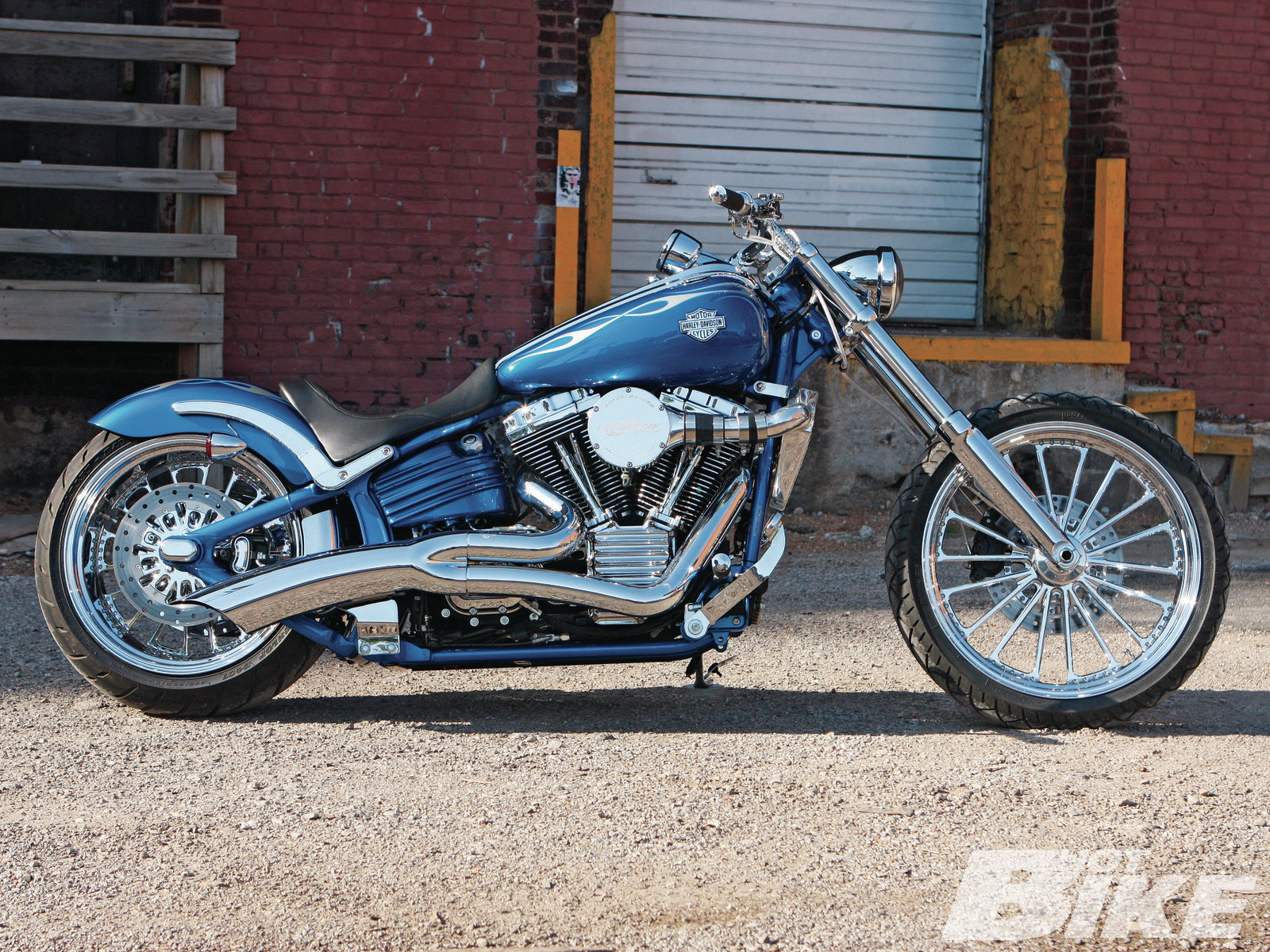 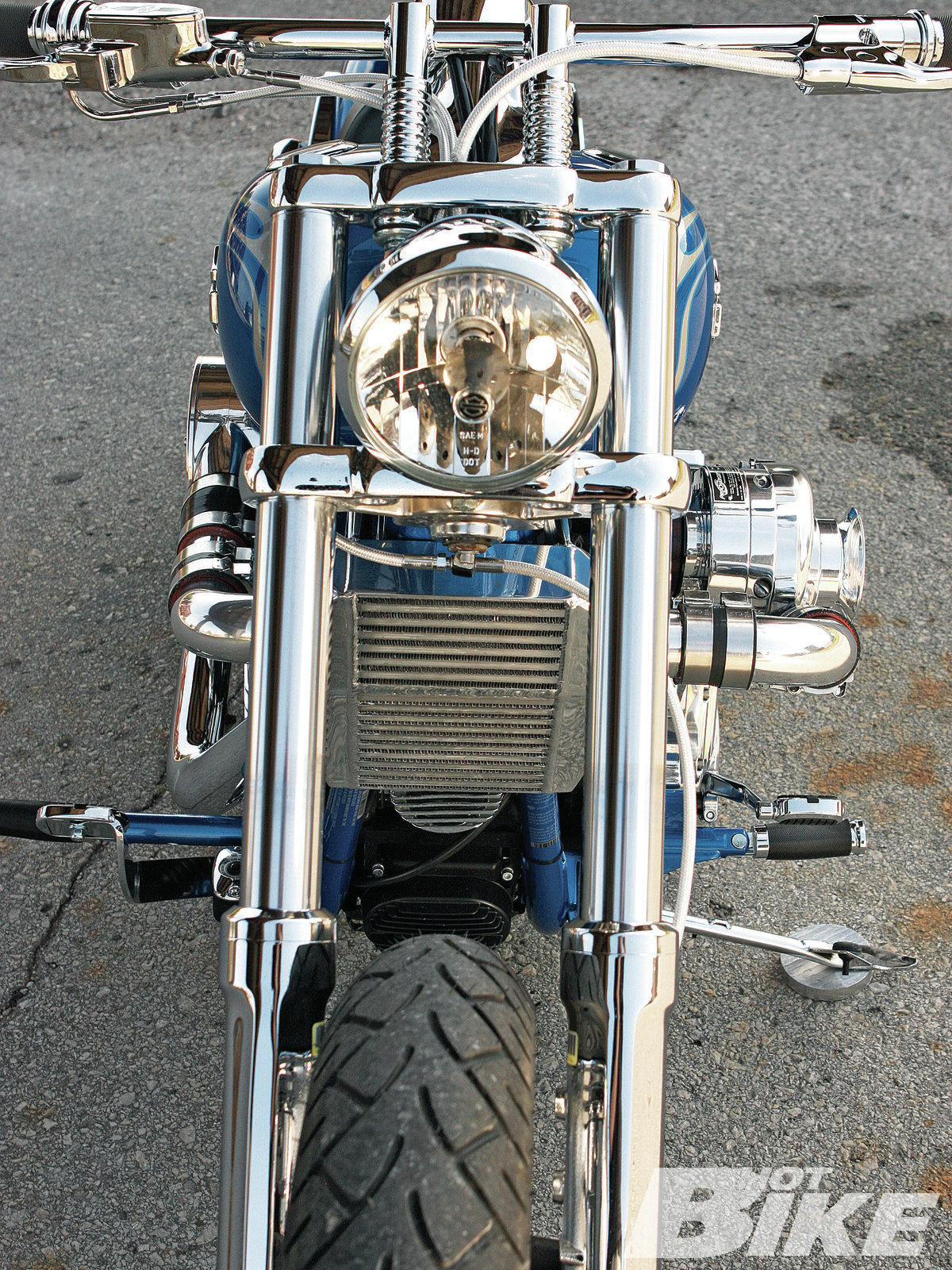 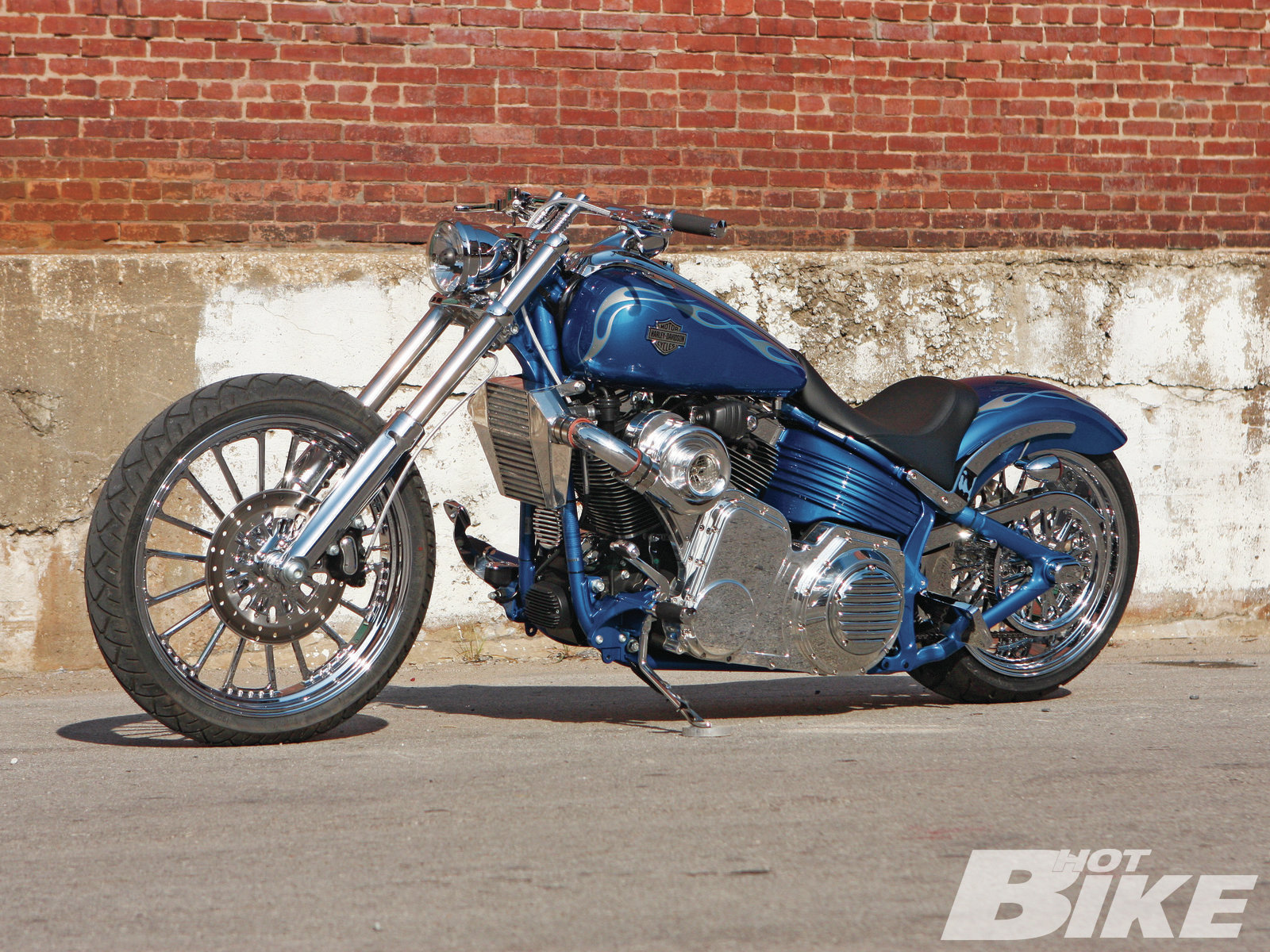 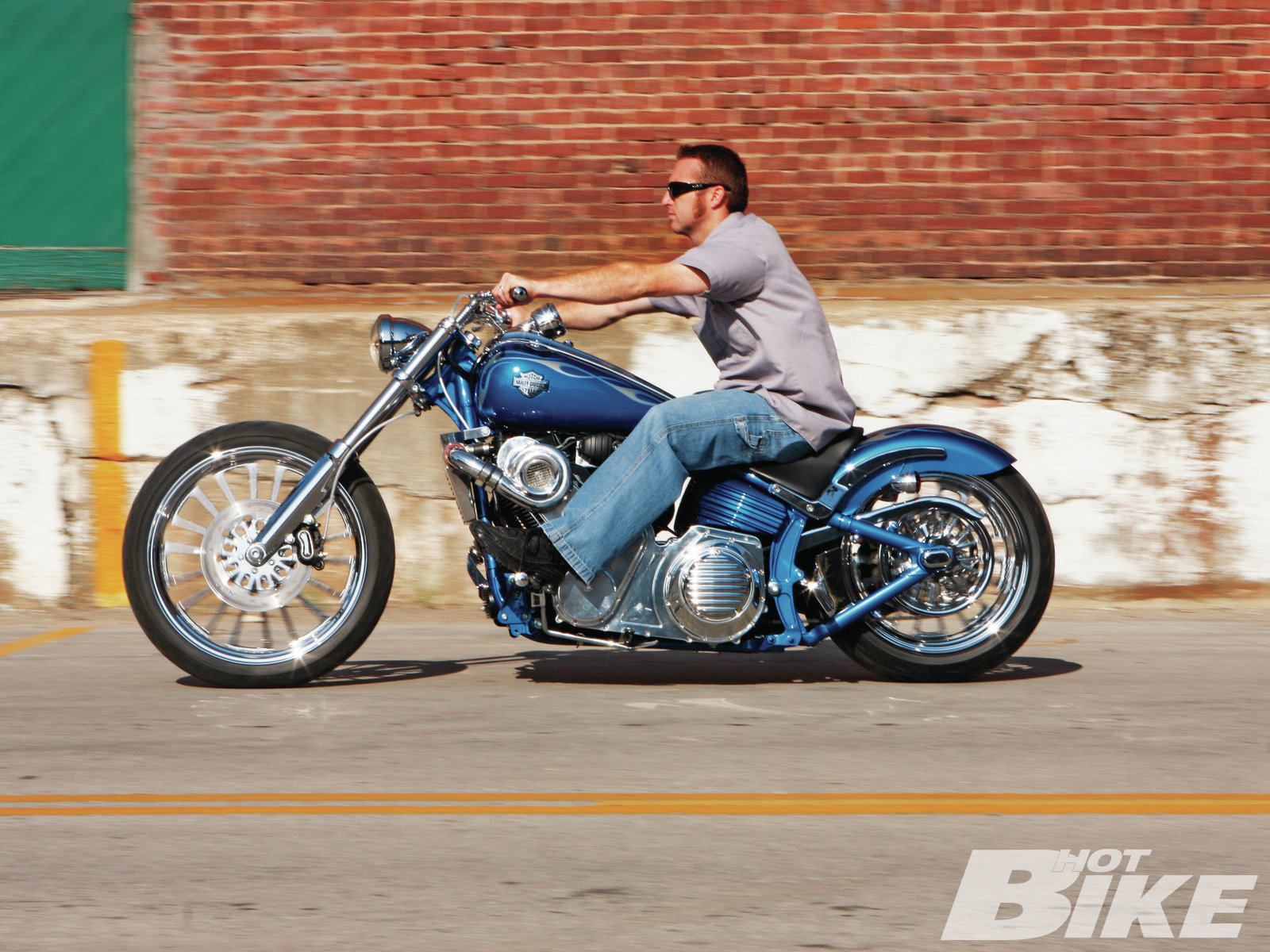 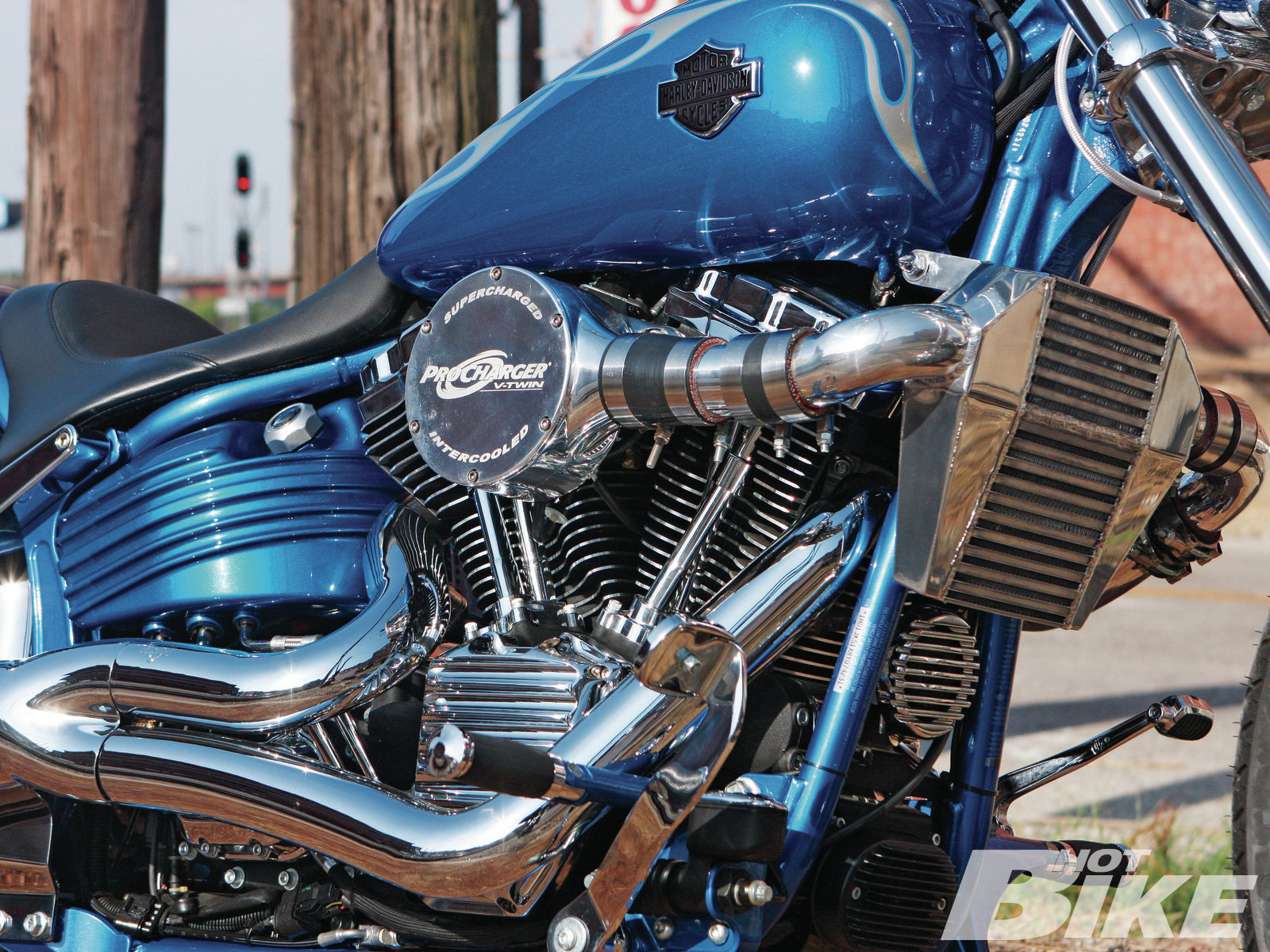 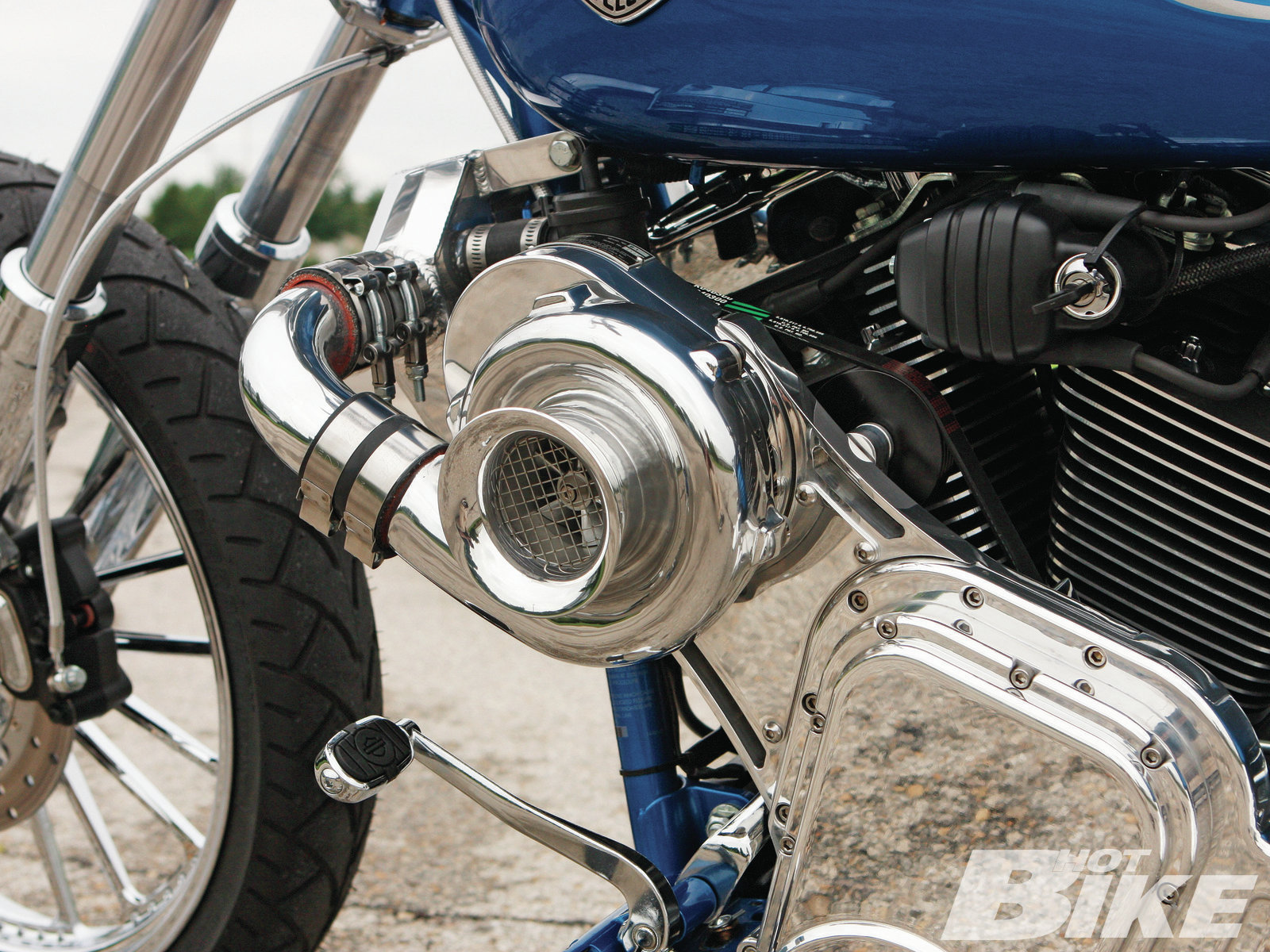 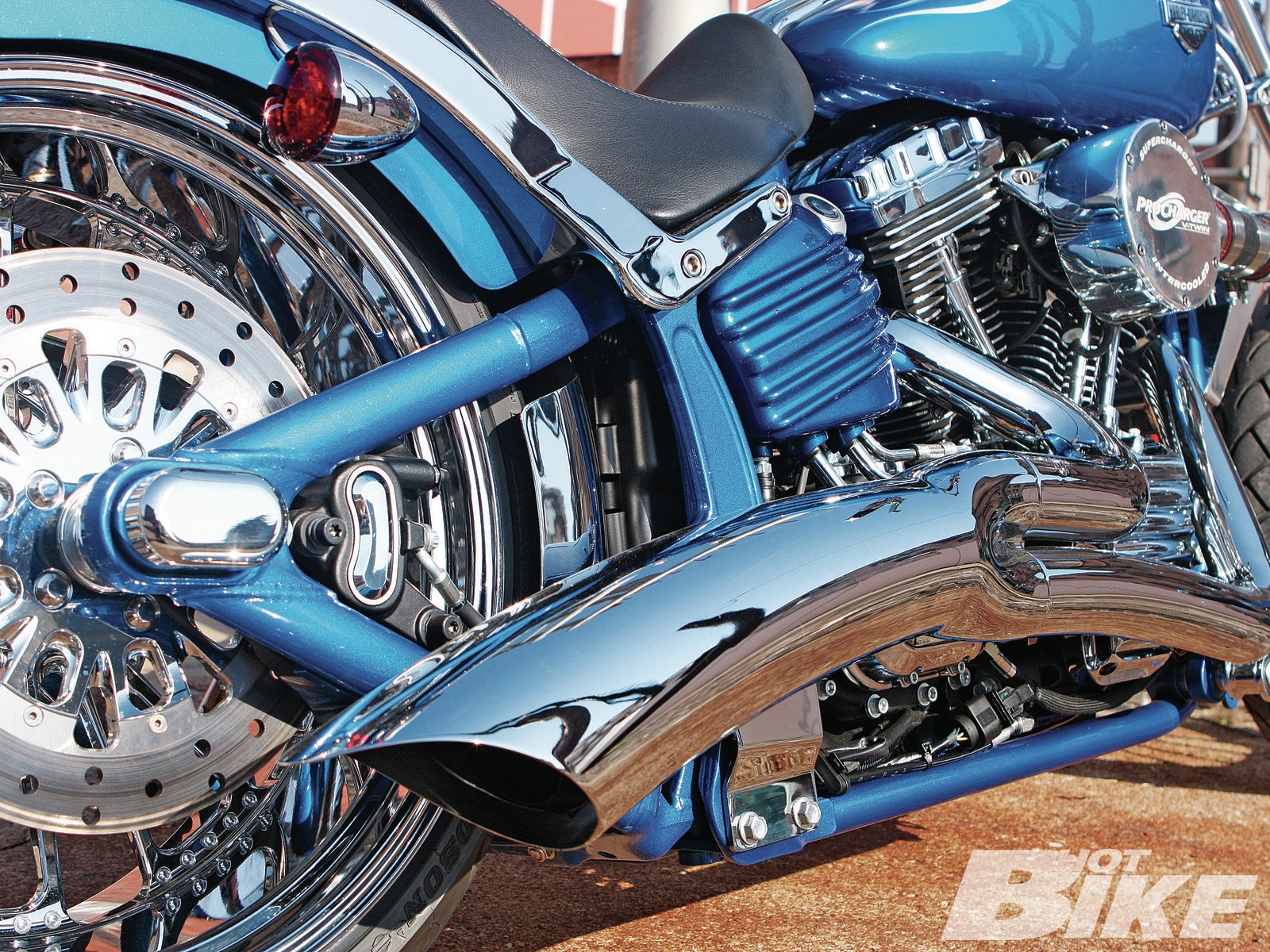 The Vance & Hines Big Radius was chosen to expel the fumes due to its massive 2-into-1 collector. 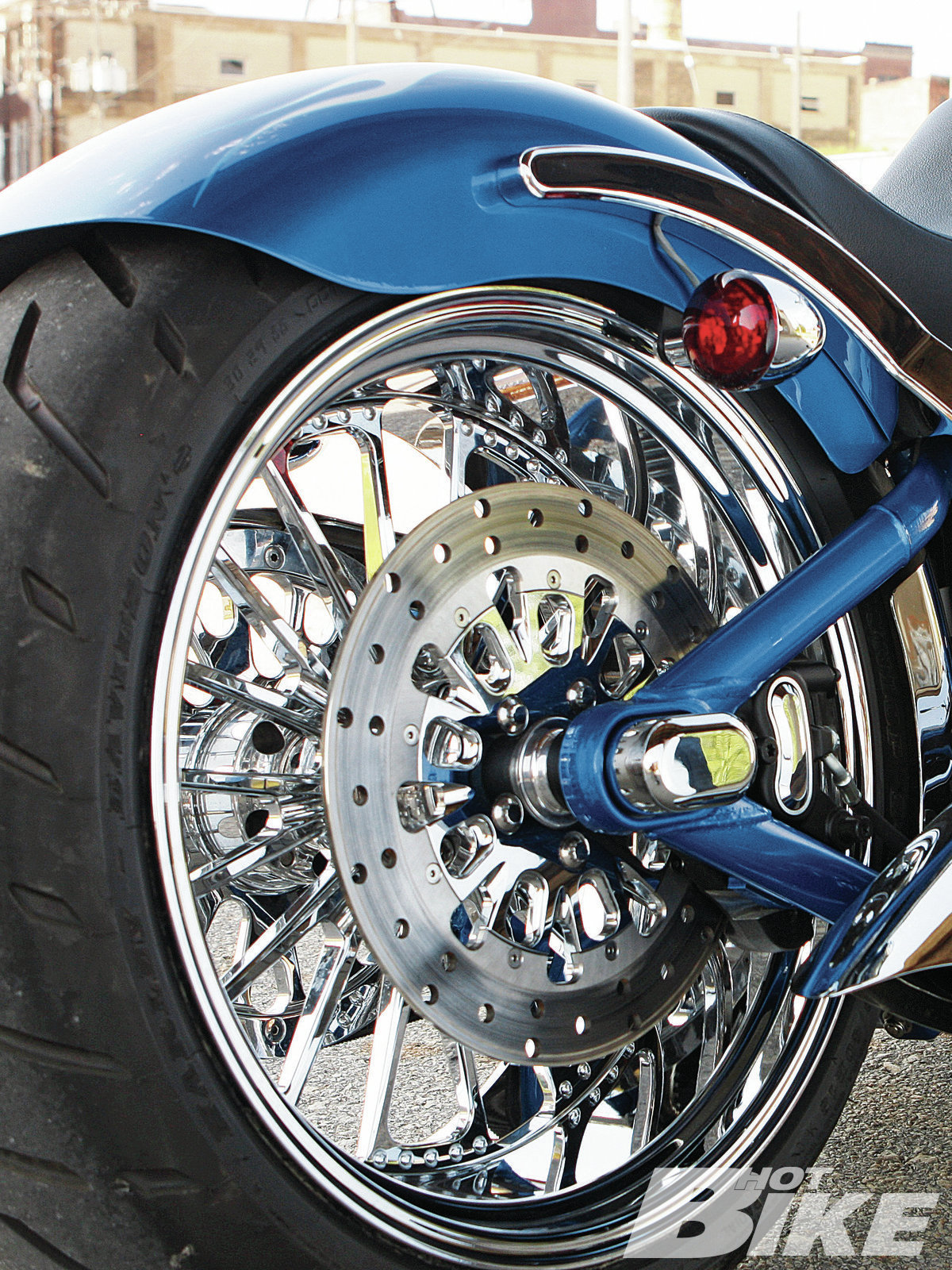 These were the first set of chrome Roland Sands Design Domino Wheels made. Walt liked the spoke design. 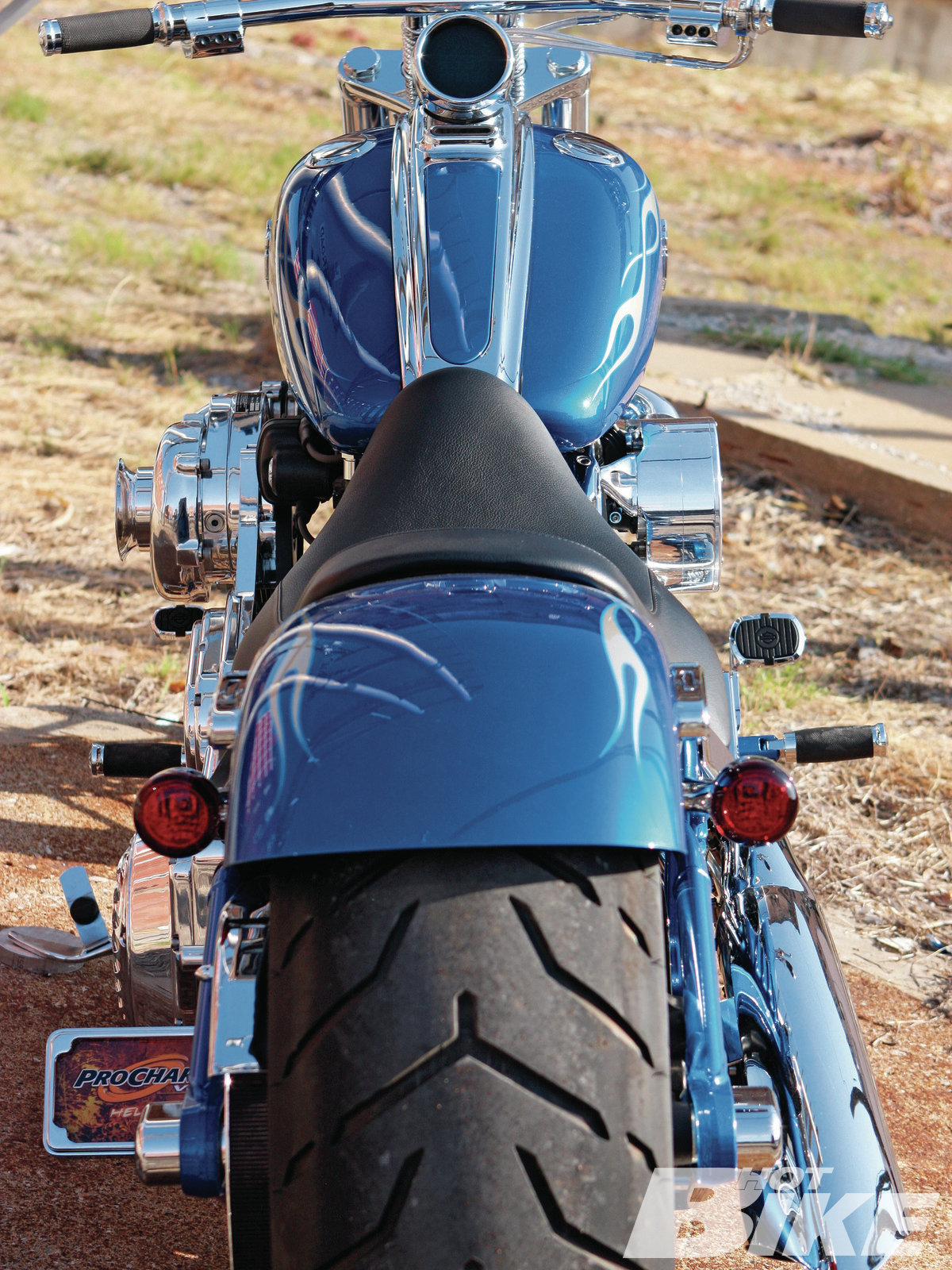 While the Rocker wasn’t necessarily the most popular model that Harley-Davidson has released during its tenure, a supercharged Rocker is a completely different story. Since the recent release of the 2012 Harleys, it’s evident that the Rocker didn’t stick with consumers, hence Harley dropping the polarizing bike from the lineup. However, when ProCharger was looking for a good test mule for its new supercharger kit, “We wanted to show our latest product on Harley-Davidson’s latest product, the 2008 Softail Rocker,” says Walt Sipp, product manager at ProCharger. When it was released in 2008, Walt and ProCharger liked the Rocker because it was kind of the underdog of the Harley cruiser platform. So why not make the Rocker into something completely cool?

Walt was in charge of assembly for this project, and once the stock Softail was purchased, the customizing began. Before installing the ProCharger on the Rocker, Walt wanted to use a Heartland USA E-Z R Conversion, which includes a new 11-inch rear fender, chrome fender struts, a rock guard, and a new seat. The reason being Heartland’s kit converts the stock Rockertail section into the more traditional Softail swingarm using fender struts. The Rockertail section was the reason consumers either loved or hated the bike. Walt did like the fact that the Rocker came standard with a 240mm rear tire, which would be better for transferring the added power from the ProCharger unit. Once the E-Z R was mocked up, the rear fender was sent to Gunslinger Custom Paint to have it matched with the rest of the Rocker’s blue with silver flame paint scheme.

Being that speed was primarily what ProCharger was concerned with—that and making sure its product delivered before being delivered to consumers and dealers—there weren’t too many cosmetic changes to the motorcycle, but sometimes less is more. However, there are some subtle touches to ProCharger’s Rocker that add a nice amount of flash like the RSD chrome Domino front and rear wheels with matching brake rotors for a uniformed fit. Also, Performance Machine hand controls keep the RSD handlebar nice and sanitary. A Dakota Digital one-off digital speedo/tach gauge was called on to relay the information to the rider.

After the accessories were bolted on, it was time to bolt on the power. This ProCharger model is an intercooled, centrifugal beltdriven supercharger that is mechanically driven off of the crankshaft to pressurize the entire induction tract above 14.7 psi (normal atmospheric pressure). So essentially it increases the pressure differential between the manifold and cylinder to create what is called charged air (greater mass of air than atmospheric pressure alone that flows into the cylinder). Since the supercharger is driven off of the crankshaft, boost is immediate and simultaneously increases as rpm increases. Boost is pressure above 14.7 psi. So for example if you add 10 psi of boost to the engine’s induction system, the engine sees the sum of both for a total of 24.7 psi.

This ProCharger model also comes with an intercooler. An intercooler works to bring charged air (heated air) to a lower temperature when it enters the throttle body/carburetor. Cooler air is denser, contains more oxygen, and requires a lower level of fuel octane, which reduces the risk for potential detonation. Detonation is bad for your engine’s components. Basically, as your blower shoots air into the engine, it is temporarily suspended in the intercooler assembly, passing through a series of passages, cooling the temperature before the air then flows into the throttle body and into the engine.

After the ProCharger installation was complete a Vance & Hines Big Radius 2-into-1 was installed to button up the power package, and the bike was finished. Lastly, Walt took the blown Softie out for a little testride and the revamped Rocker rode like a bat out of hell! Overall the ProCharger delivered as Walt had anticipated, and the product wound up winning the 2008 Performance Product of the Year at the Cincinnati V-Twin Expo. HB

RSD Expands the Black Ops™ line to the Diesel and Judge Wheels, Components & finish to their steel line up […]