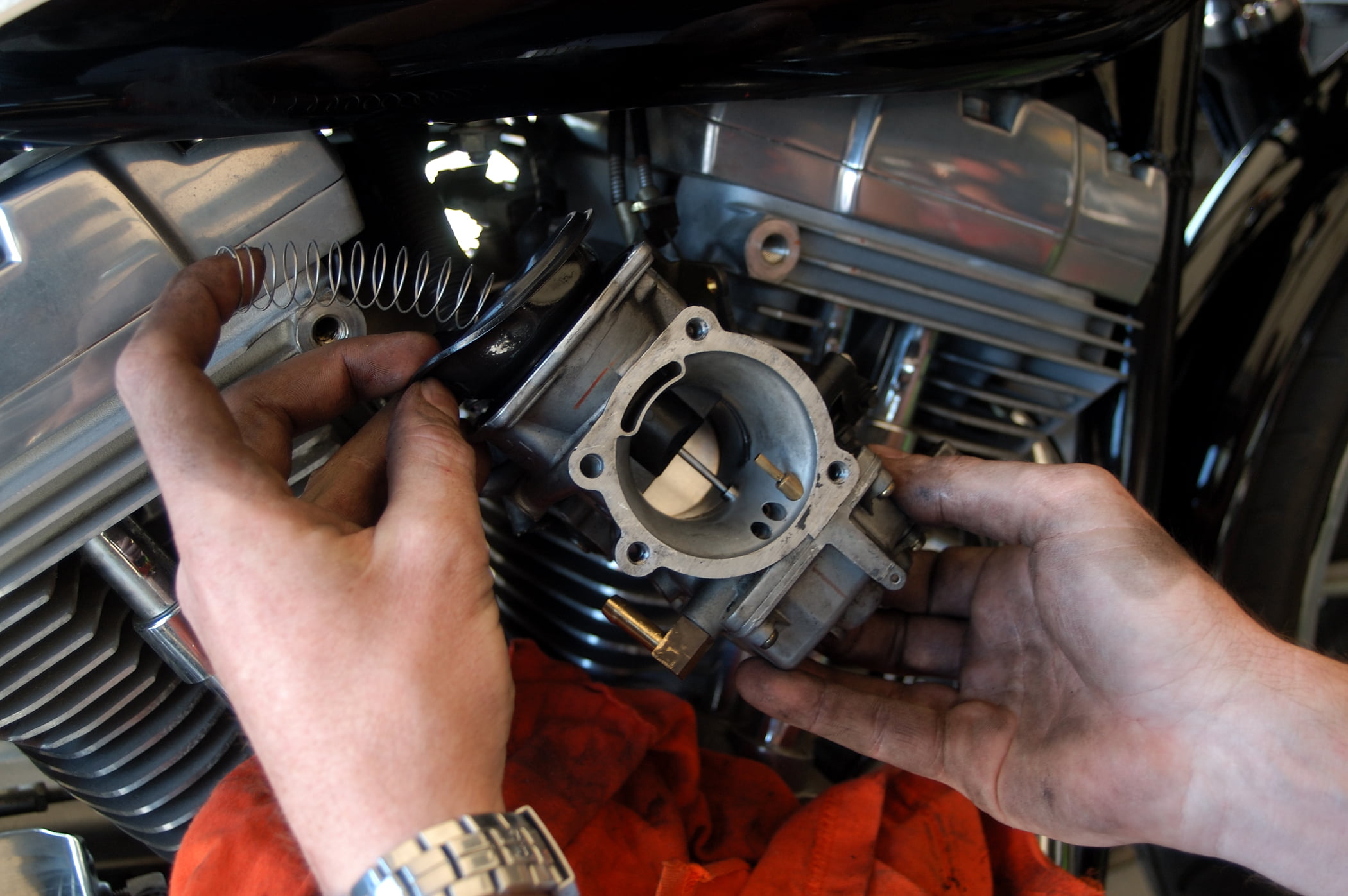 As widespread as fuel injection has become, there are still plenty of V-twins with a carburetor between the cylinders. Customs and H-D alternatives like those Big Dogs and Iron Horse bikes most always have an S&S on board, and more than a few Harley riders are still twisting the throttle on a factory-installed CV carburetor, which isn’t to say that both of these groups are always tickled pink with the performance of their chosen method of fuel delivery. Tuning carburetors can be a headache, and curing those woes has gotten short shifted in these modern times. Finding someone who knows how to work with screwdrivers and jets has gotten a little tough too. The guys at Speed’s Performance Plus, however, are just as adept with carbs as they are with laptops, Jason and Jamie both having learned from a master, their father Wayne Hanson. “And we still tune plenty of carbureted bikes,” Jamie says. And with the right setup, he says, those bikes can become strong, smooth, and crisp runners.

The easiest cure, Jamie says, is usually found for those customs with an S&S as standard equipment. Riders will complain about sluggish performance, an engine that just seems dead. “And more often than you’d think,” Jamie tells us, “the problem is the air filter.” Those stylized pointy filters all covered in chrome might look good, he explains, but they’re strangling the air intake. “They don’t work worth a darn, especially when you’re trying to feed a big-inch engine.” Swap that filter for something more reasonable, and—presto—instant performance. And speaking of those big-inch engines, quite often the iconic S&S teardrop filter isn’t big enough either. “The element can be too narrow,” Jamie explains. Fit in a deeper one by spacing things out, still keeping that S&S cover, and you let the engine breathe.

And for those misbehaving Harleys with their factory CVs? If there’s any spitting out of the air cleaner, Jamie cautions, it’s a safe bet the bike is running way too lean. And it might not be just the jetting. A close check of all the intake gaskets and seals, especially on bikes with some years and miles on them, can turn up some horrendous air leaks. “But before we get too far into any of this,” Jamie goes on, “we like to lay out all the options available to this rider.” Including the swap of the CV for something better.

Now, a stock Harley fuel mixer is a solid, mostly reliable piece. It’s worked admirably for years, and with enough futzing and fiddling it can become a more-than-fair air/fuel mixing device. Within its limitations. Setting it up right, however, is going to take some time, some money, and most important some knowledge. Something often overlooked with a CV, for instance, is the float-bowl venting. There might not be enough of it, the result being an air/fuel ratio that’s all over the place: lean one minute and rich the next. No jet change will correct that. Increasing the venting will even out the fuel delivery, but that’s just the start. The next move with that standard CV is a Dynojet Thunderslide package with its lightweight slide, height-adjustable needle, upgraded spring for the diaphragm, and an all-new main jet system. An OE carburetor properly vented and packing a Thunderslide is going to be as near perfect as that fuel mixer will get. “Near perfect” being the operative term.

“But by the time you’ve done all that, it can make more sense to spend a little more, an extra hundred bucks or so, and put on a Mikuni,” Jamie says. Why Mikuni? A big advantage, Jamie says, is the ability to really fine-tune that carburetor. All the jets are offered in smaller increments, and these carburetors also feature an adjustable needle. You can really dial things in. Another plus is the Mikuni’s adjustable accelerator pump. But the biggest positive on the Mikuni ledger is its flat-slide design, completely eliminating the throttle butterfly. Unlike the Harley CV, which has a slide and then a throttle butterfly behind it, as soon as you twist the throttle with the Mikuni you get instant response. Couple that with almost unlimited adjustability and the carb-swap option looks even better. There are plenty of sizes available, and for an 88- or 95-inch motor (engines most likely to have a CV), Jamie says a 42mm is just about perfect.

Finally there’s this. With S&S, CV, or Mikuni, you’ll be way ahead to have that carb dialed in on a dyno with a sniffer shoved up the pipe. It’s the only way to be certain the air/fuel ratios are set in the happy ranges.

Got a carbureted bike giving you the fits? Have a chat with the Speed’s Performance team. Take a look at the website for the tour schedule and an event stop near you.

When it comes to braking surface area, bigger is better, right? The Big Brake Kit from Arlen Ness replaces the […]

Make Better Cocktails With These Shakers

If you prefer your drink shaken, not stirred, take a look at these cocktail shakers. Unsplash James Bond’s famous line […]

Exception To The Rules – From The Editor