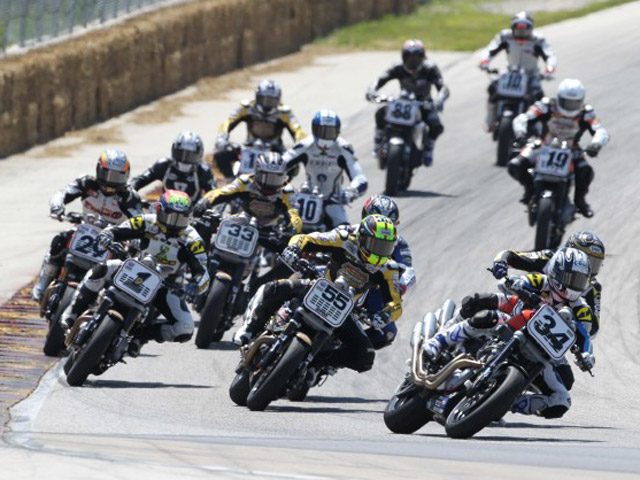 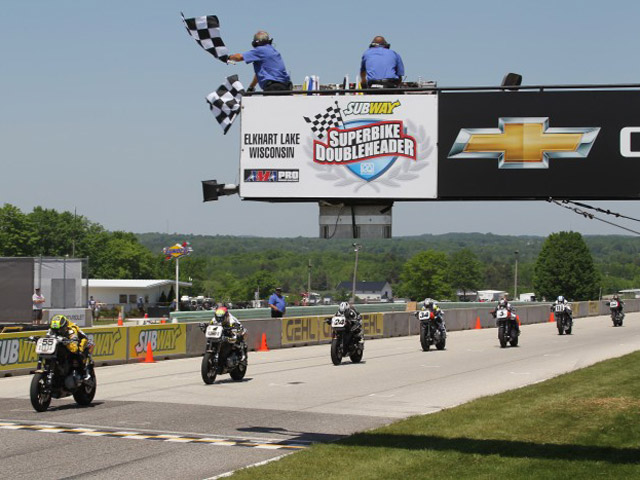 Several riders took turns at the head of the lead pack, including Danny Eslick (Bruce Rossmeyer’s Daytona Racing), Michael Barnes (Drag Specialties), Steve Rapp (Parts Unlimited), and Fillmore. Other riders in the mix included Travis Wyman (Harv’s Harley-Davidson), Michael Beck (J&P; Cycles), and Shawn Higbee (WFO Racing), with riders swapping the lead sometimes several times per lap as they drafted and outbraked each other on the 4-mile track’s three long straights. As the final lap approached, riders planned their strategies for the run up to the checkered flag out of Canada Corner, the penultimate corner of the 14-turn course.

“The Harleys push a pretty big hole in the air, and if you’re the fourth or fifth guy in line you can get a pretty good head of steam. Generally somebody would pass me back going into Canada Corner, which is perfect. That’s what I was hoping for the last lap and it just didn’t work out,” said Eslick, who eased up enough to allow Fillmore to pass but couldn’t make the gap back up in the run up to the finish line. “The draft was a huge part of the race today, and Chris definitely outsmarted me on that one.”

“[Eslick] wanted to give me the position all the way just before coming up into Canada corner. He pretty much checked up and I got a good run,” Fillmore said. “You really can’t make up much time there, so I figured I could make a little bit of a jump and cross my fingers and hoped that nobody got me at start/finish. And it worked. I think it was the only lap that nobody passed me on the front straight.”

Third place finisher Travis Wyman, who hurried from the post-race podium ceremony to make the start of the Supersport race, went on to win that race for his first AMA Pro victory.

“The sound of Harley-Davidson motorcycles resonates with riders across the globe, and we are excited about this opportunity to bring the thunder of XR1200 racing to a worldwide audience at one of the greatest racing venues in the world,” said Steve Piehl, Harley-Davidson director of customer experience.

Give the Gift of Blue This Holiday Season — Shop MillerWelds.com

Hats, tumblers, and gift cards. Courtesy of Miller Electronic Mfg. Miller has added another reason to celebrate the holidays: free […]

A Dark Horse Under The Gun