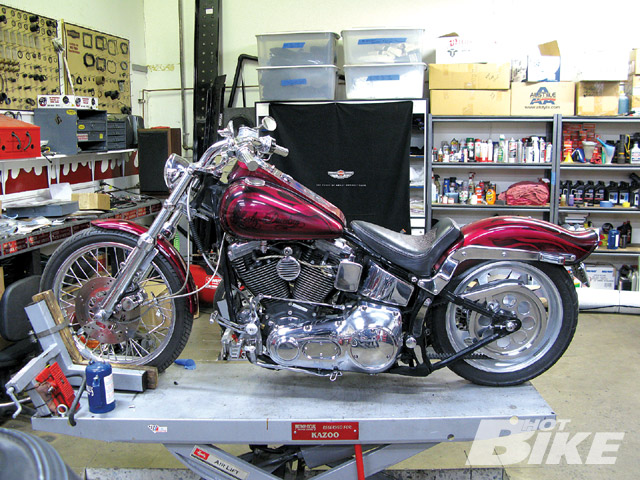 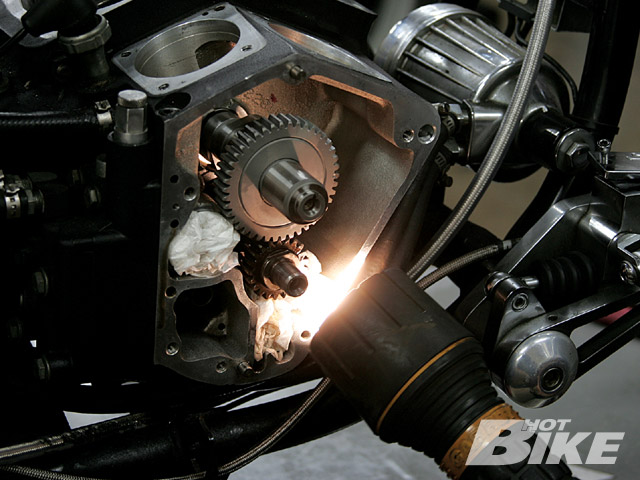 1. By the time I had gotten back to the shop from our office to pick up my camera, Devin and Shop Tech Kazoo had the top-end off to inspect the pistons and the cam cover was removed. 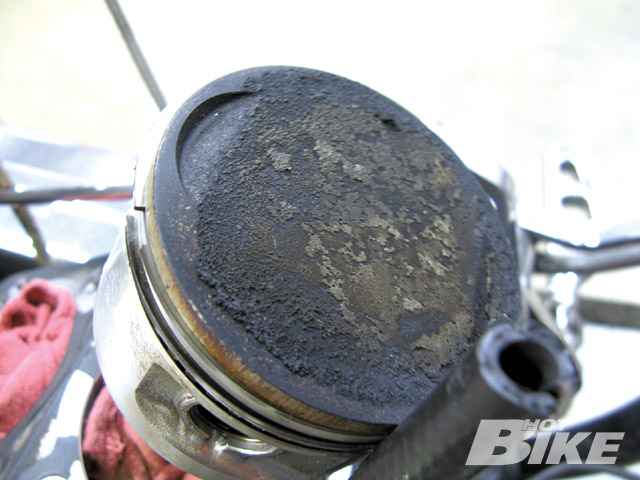 2. The heads were dirty and one of the exhaust valves was cracked and chipped, the pistons were showing signs of wear and had a lot of carbon build up. 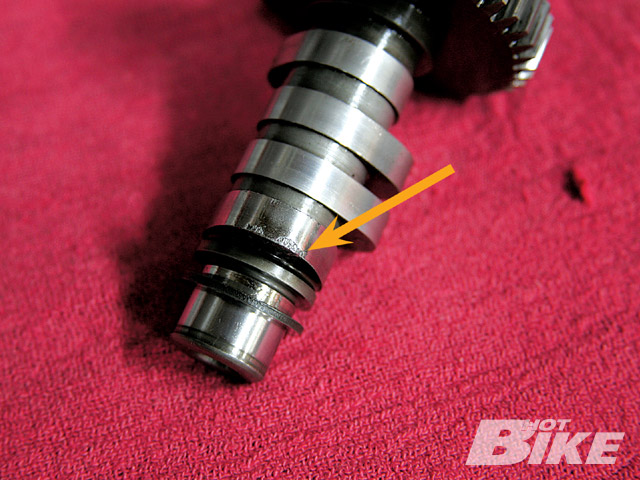 3. Once Kazoo had the cam out of the bike he could see the damage to the cam lobe (arrow) for the rear exhaust. That would match the cracked rear exhaust valve. 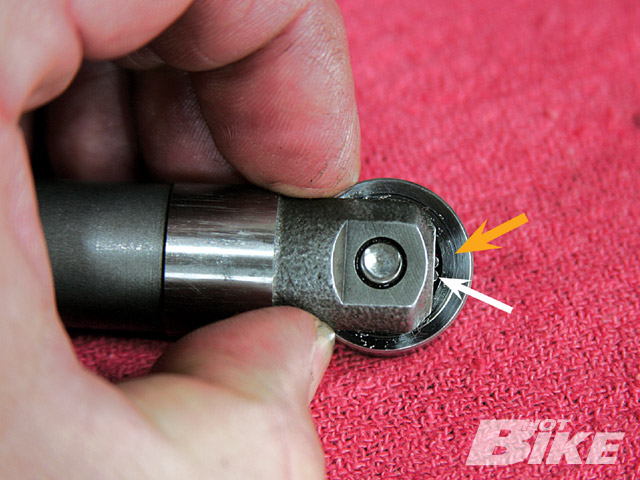 4. The tappets were the next thing that Kazoo put under the microscope and found that the roller bearing for the rear exhaust was bad with a groove worn into the side (orange arrow) and so much play in the roller you can see the bearing (white arrow). 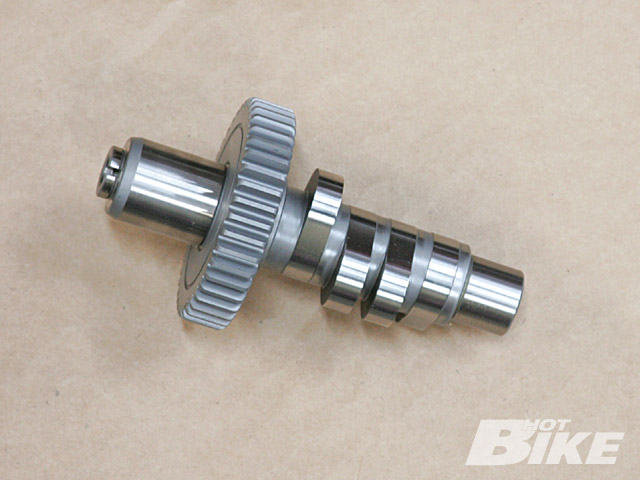 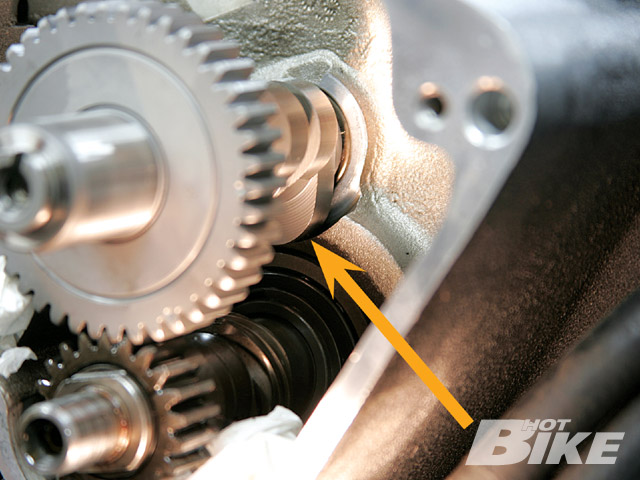 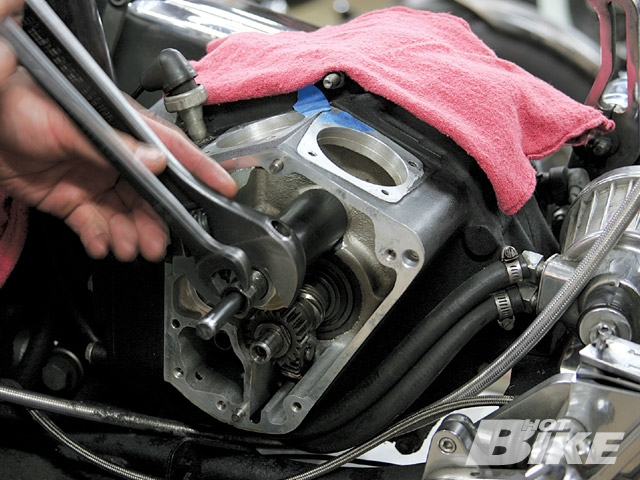 7. Once the cam clearance was good, Kazoo installed a new cam bearing into the case. He then installed the cam and checked the cam cover for clearance. Everything fit just right. 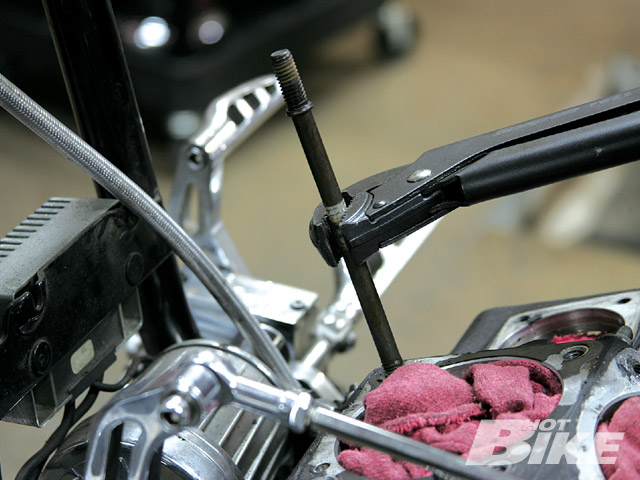 8. Devin also replaced all the cylinder stud bolts, some of them had come loose and he felt that it was best to just replace them. Cost on a set of studs is around $80.

10. Next, the new H-D Hydraulic tappets were placed in oil to soak. This will help with the bleed down once it comes time to adjust the pushrods and start the motor. They were installed onto the tappet block and then the motor.

11. With all that going on Devin had honed the stock cylinders to fit the new .010 over Screamin’ Eagle pistons. Cost around $110.

12. Here Kazoo is checking the piston ring end-gap on the freshly honed cylinders.

13. Then the pistons were installed on the rods

14. …followed by new base gaskets and the cylinders.

15. A new set of Screamin’ Eagle heads were ordered out for the bike. The bike owner could have had the stock heads cleaned, reworked, and all new valves installed to save a few bucks, but he was looking to get the bike done in time for a trip he wanted to take.
Cost for heads around $950. The cost to re-work a set of heads is around $650.

17. Kazoo placed the new heads and gaskets onto the cylinders and torqued them down to factory spec. He then installed the freshly powdercoated rocker box assembly, pushrods, and tubes.

18. Then the S&S; carburetor was installed, followed by the gas tank and exhaust pipes. This is where we are going to leave off. We are still waiting on a few pieces to come back from powdercoating, then we are going to log as many miles as we can, then we’ll put the bike on the dyno for the results.
The cost of all the parts plus miscellaneous things like oils and filters cost between $1,600 and $2,000. The labor estimate was approximately 10-15 hours (rates vary, $75-$95 an hour or more depending on the bike and shop).

A few issues back, Volume 41 Number 7, we did a story about finding a good or bad deal on a used bike. One of the HOT BIKE staff members picked up a ’91 Softail Custom that was sitting for a while. He wanted to get it up and running safely so he dropped it off at Freedom Cycles in Orange, California to have them go over everything and service it. The bike was given the run-though, all the fluids were changed, and the tires, brake pads, filters, and spark plugs were replaced. Then the carburetor was cleaned and rebuilt. In the Number 7 issue, we mentioned the bike was purchased for around $8,000 and the owner spent just over $2,000 on the above mentioned parts and labor. Not long after all the work was done he started to hear an odd noise coming from the cam area. So the bike was dropped back off at the shop to pinpoint the noise and what it would cost to fix it.

Back at Freedom, the bike was turned over to Devin-the shop’s owner-for a test ride to figure out the problem. Within the first five miles he knew that a tappet or pushrod was bad. At low speeds and at idle he could hear a noise from the cam area, but at high speeds it sounded like the lifter was hanging up, or a pushrod was out of adjustment. One way or another the bike was going to see some down time. When Devin got back to the shop, he let the bike cool down, and then he started by removing the cam cover. He then checked the pushrods and before we knew it the heads were off the bike to check the valves

Right away Devin could see that the bike was going to need work. The bike’s owner decided to go ahead and freshen up the motor with some cylinder work and new H-D Screamin’ Eagle parts, which included a new cam, a set of tappets, pushrods, pistons, and heads.

This would also give the bike’s owner the opportunity to clean up the look of the bike with some powdercoating since the bike was getting torn down for repairs anyway.

Once again Martin Resendez and his merry men, Rolling Deep for 4 Charities, make a run for the border for […]