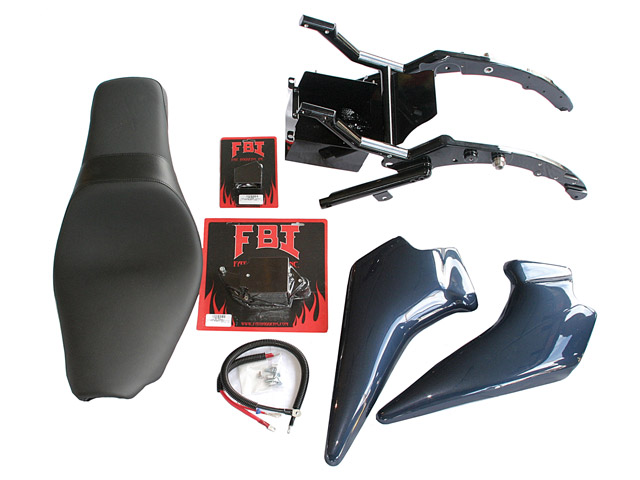 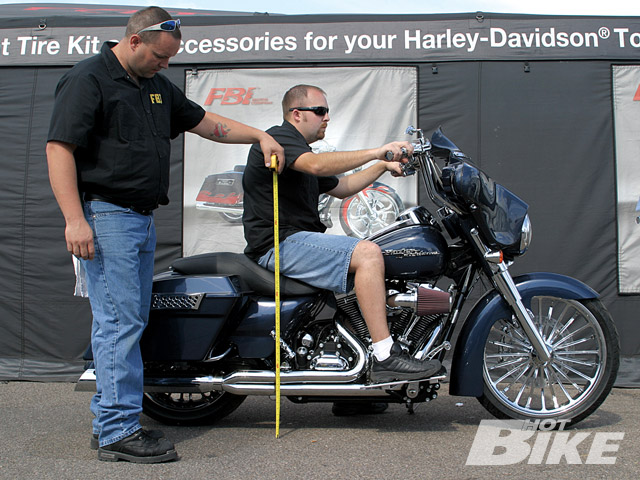 2. FBI Director Gary sits aboard the Glide as agent Chris collected the evidence. He found the Glide’s stock seat height measured about 27 inches from the ground up to the stock seat. 3. The main objective was to replace the stock rear frame section with the new subframe. In order to do so, the bags and seat were taken off, the main-fuse was unplugged, and the shock lines were disconnected. Then the fender strut covers, saddlebag support brackets and rear fender were removed. 4. Chris unhooked the ECM from the main harness, lifted the plastic battery cover out of the way, extracted the battery, and unhooked and discarded the stock battery cables. Then the TSM was removed (arrow) and re-installed later into the new position of the provided FBI TSM mount, which relocates it to the left side. 5. Alan unplugged the plug wires from the ignition coil, and then the coil from the battery box was next to come out. 6. Then the fuse block was taken out of its stock fuse box (arrow). Later it was placed into FBI’s new billet fuse box mount. But first, the agents had to get rid of the old frame section in order to mount the FBI fuse box to the new subframe. 8. The stock battery box was removed to make room for the new subframe, and then Alan located the TSM loom (on the right side of the bike) and cut into the insulation to make it longer. It was then wrapped with electrical tape and rerouted to the left side of the bike to where the TSM’s new home will be. Also, the new battery cables were installed at this time and hooked up once the battery was installed. 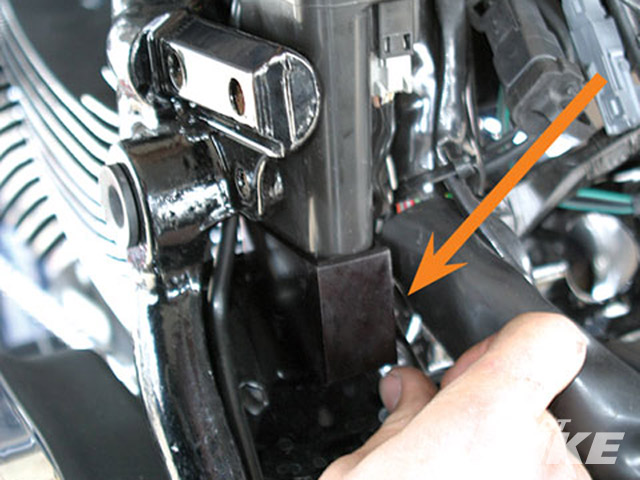 9. Alan installed the new TSM mount (arrow) on the left side and plugged the TSM into its new receptacle. 10. Here is a shot at the stock rear frame section (bottom) and the new subframe (top). The new subframe features the reshaped lowered section that brings the seat down about 3 inches. It simply bolts right in place of the stock subframe in a snap.

11. The two agents fastened the new subframe with the pre-existing frame’s hardware to the main frame and tightened everything down to factory spec.

12. Alan fit the fuses into the new billet fuse box mount, which was later tightened to the new subframe after the battery had been installed.

13. Then he located the ECM, flipped it on its side, and attached it to the side of the battery box on the new subframe on the right side for easy access.

14. Agent Alan re-installed the battery and hooked up the new cables, then mounted the new fuse box mount onto the subframe, and hooked the coil back up. The battery’s cables are longer to make up for the extra length they have to travel due to the relocation of the battery. Also, the cables secure to the sides of each terminal, instead of on the top of the terminals (arrow).

15. Chris and Alan reinstalled the fender, and then installed the new color-matched side covers. The stock grommets were reused in order to plug the side covers in place.

16. After mounting the saddlebags, Alan mounted the new two-up seat to the bike and we were done! It fit like a glove! Installation time was roughly two hours and very simple.

18. Here’s how the bike looks from the side. Notice the dropped seating position in between the bags on the left (arrow). Above is a top view of how the new seat looks; it feels narrower and it’s comfortable. A 2-Up Touring seat and a solo seat are also available with the kit.

When Harley-Davidson developed a new chassis for 2009 Touring models, the Fat Baggers, Inc. (FBI) R&D; task force went to work and created a new Drop Seat Kit ($1,799.95 with unpainted side panels, with painted side panels $2,050.95) that would alter the Motor Company’s rear frame section to lower the riding position approximately 3 inches.

According to Kent Reed, sales and marketing agent with FBI, with this kit they were able to achieve 3 inches of drop in seat height without sacrificing suspension, frame clearance or seat comfort to give riders a better footing for starting/stopping stability and more confidence when they ride, stop, and take off.

The Drop Seat kit’s main component is a new subframe, which replaces Harley’s tail section of the frame with a reformed tail section that also repositions the location of the battery 90 degrees. The new subframe’s tubes-directly under the seat-are positioned lower to fit a new two-up seat (other seat options available) that drops the height of the rider’s position when in the saddle. The setup also creates a narrower section at the front of the seat where it meets the tank so it makes it more comfortable and so that you don’t get fatigued in the hip area. But most of all if you’re one of those guys that have to stand on your tippee toes (do grown men say that?) when immobile this kit is for you. Kent also mentioned that the Drop Seat Kit is going to be available for ’96-08 Touring models too, but you will have to do a little cutting and welding to the stock frame.

We ran into the director of FBI, Gary Chipp, at the company’s monster tent in Laughlin, Nevada, at the ’09 River Run and it just so happened they were about to install one of these kits on ’09 Street Glide. It was just another case of being in the right place at the right time, so we snapped some photos as FBI agents Alan Fawcett and Chris Taylor performed the interrogation, er…conversion. The install was relatively easy, just some re-routing of components and such to make room for the new subframe and other additions.

Those of you who are regular readers of HOT BIKE magazine have no doubt been following our 96-inch Evo build. […]

The Mini Beast 6 Motorcycle Air Horn retails for $169.95 Courtesy of Custom Dynamics Long known in the aftermarket side […]