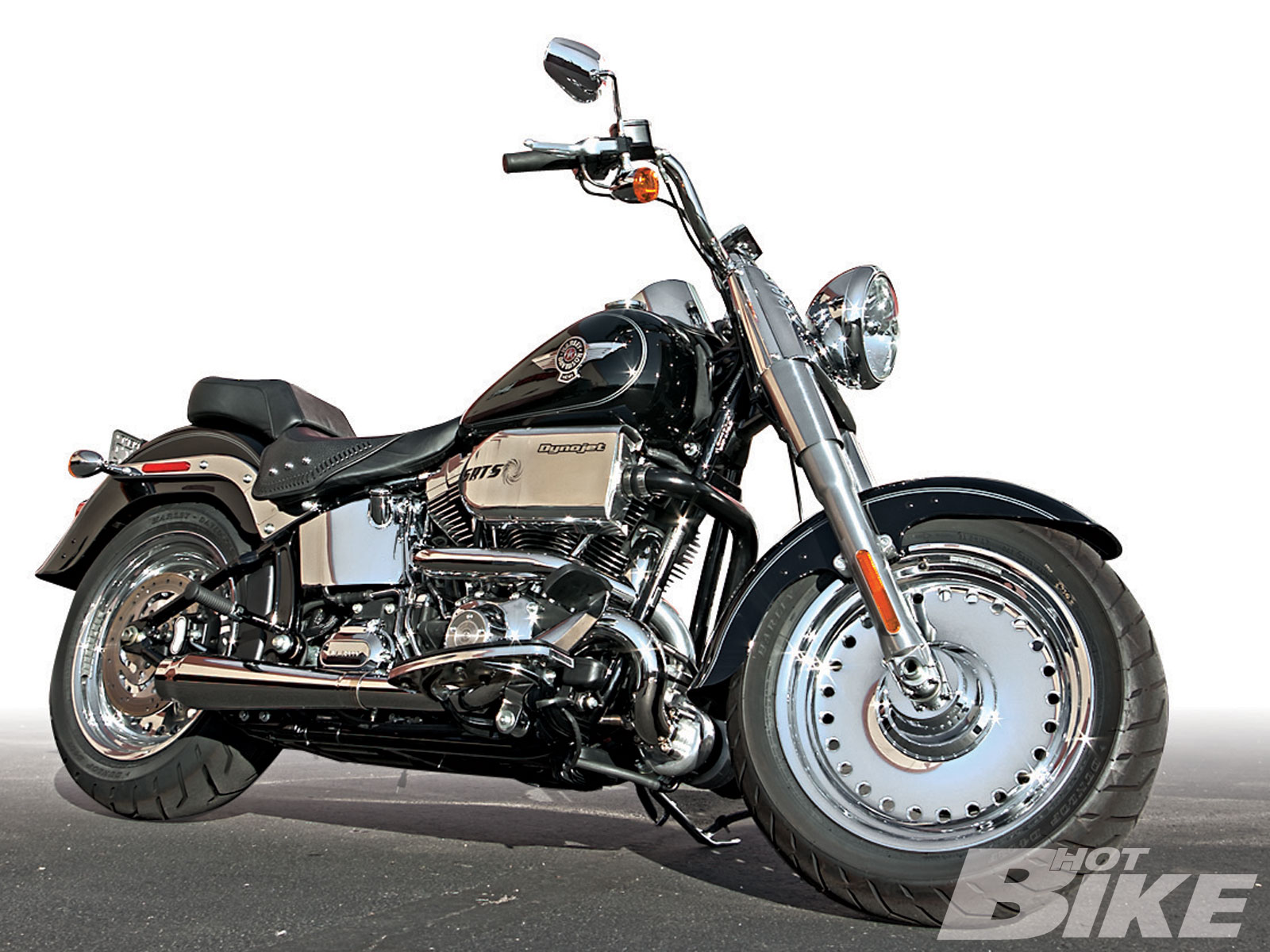 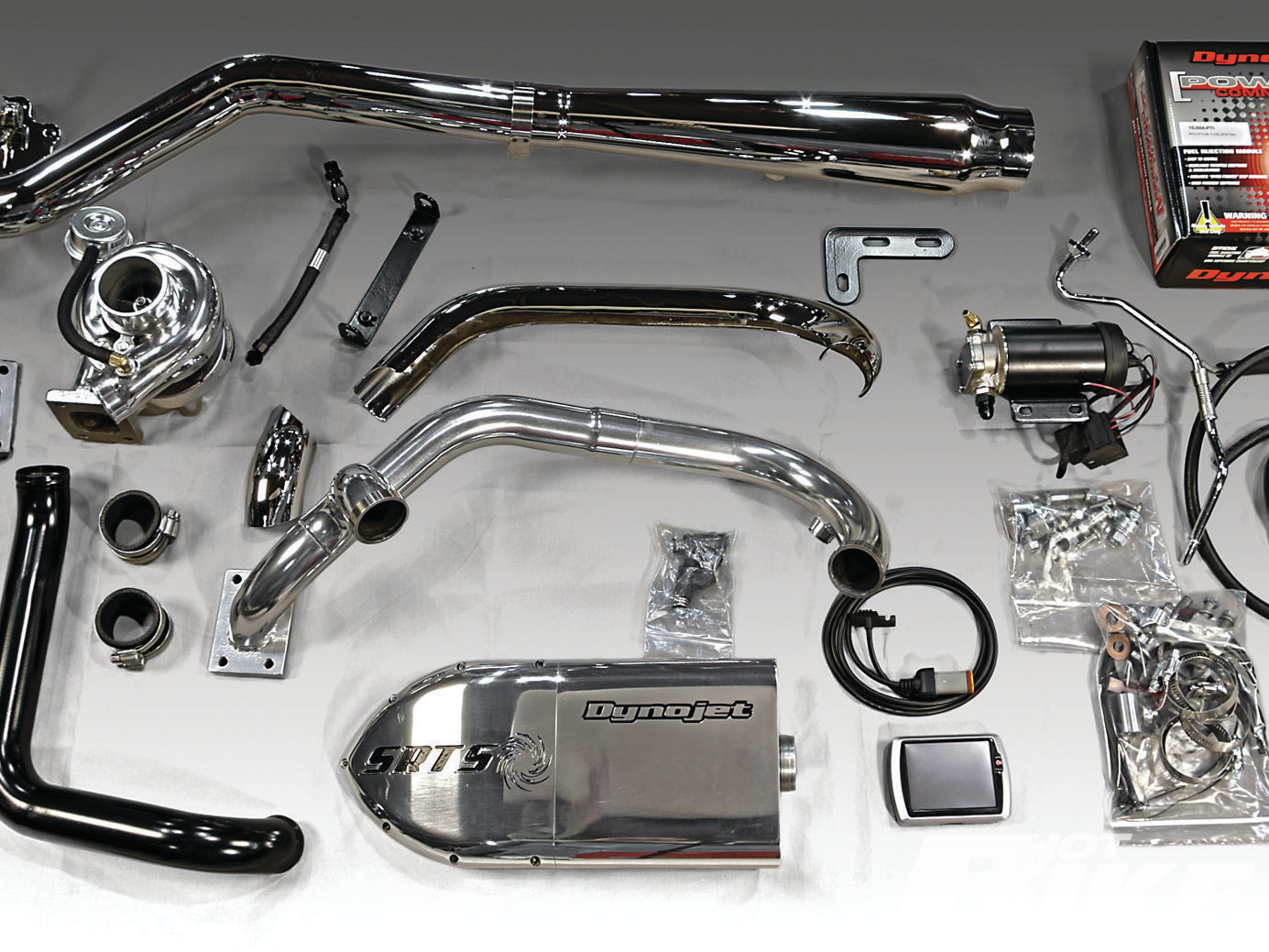 02. The install started by stripping the ’11 96-inch Fat Boy of its original exhaust, air cleaner assembly, and right-side footboard. 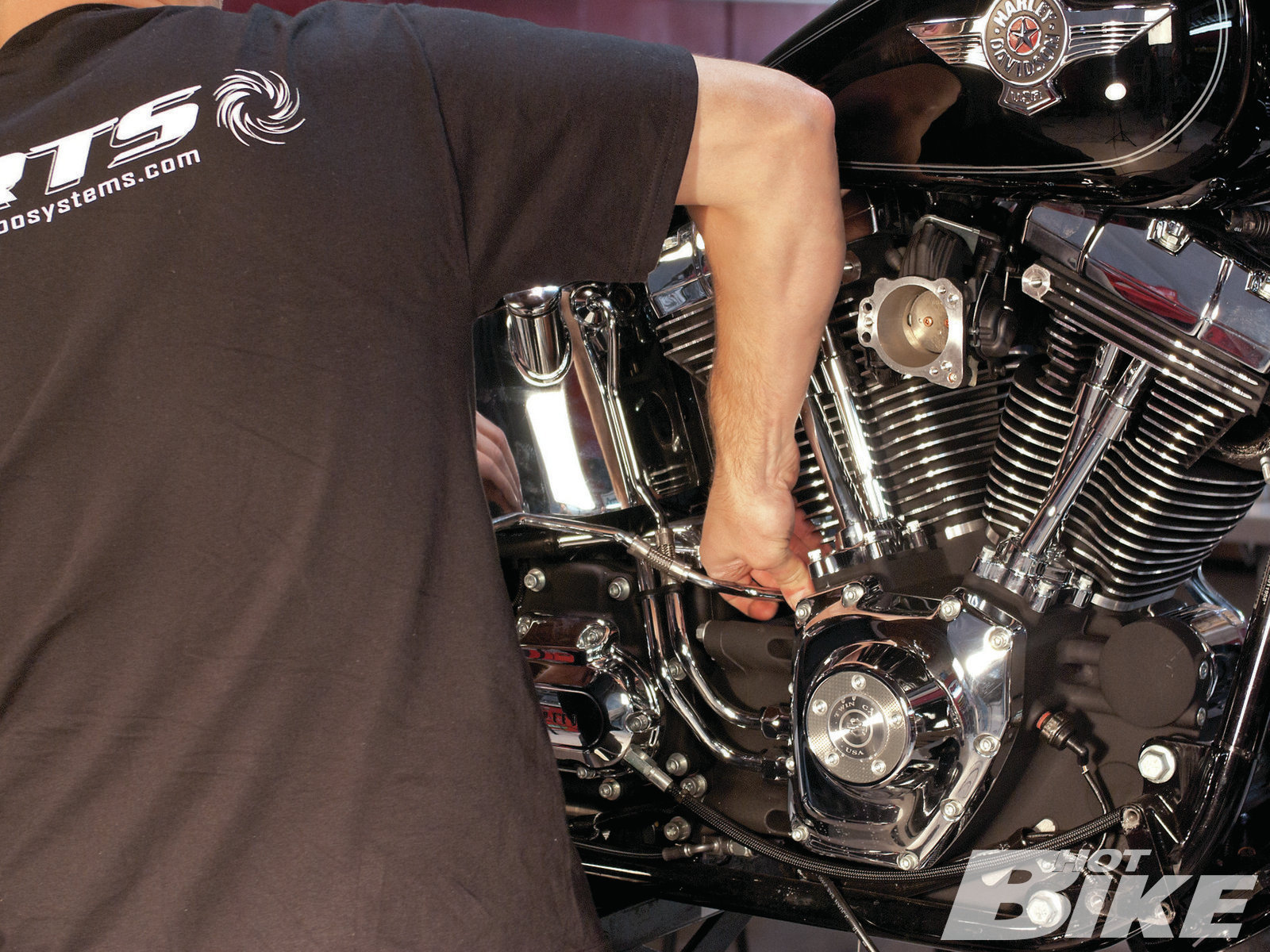 03. Once the stock return feed to the oil tank was removed, the new oil lines were routed from front to back along with the included chrome return line to retain a semi-factory appearance. The new return oil line in the kit is custom-made with a Y built into it so that the oil from the pump and engine can be sent to the oil tank. 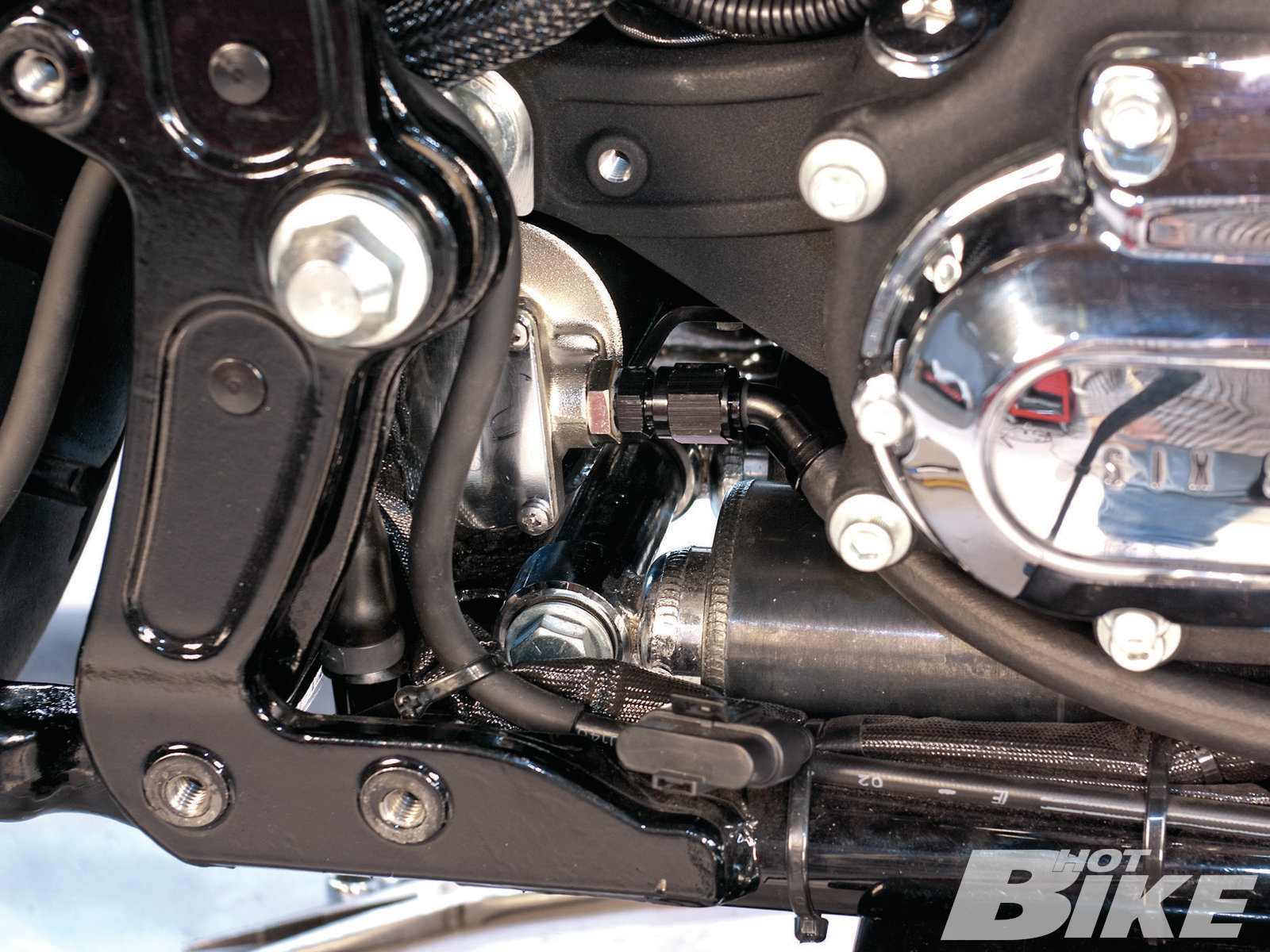 04.The scavenging pump was then bolted in place at the back of the frame between the back of the Softail’s transmission and shocks. It’s powered with a relay tied into the bike’s ignition system so it runs any time the ignition is “on.” 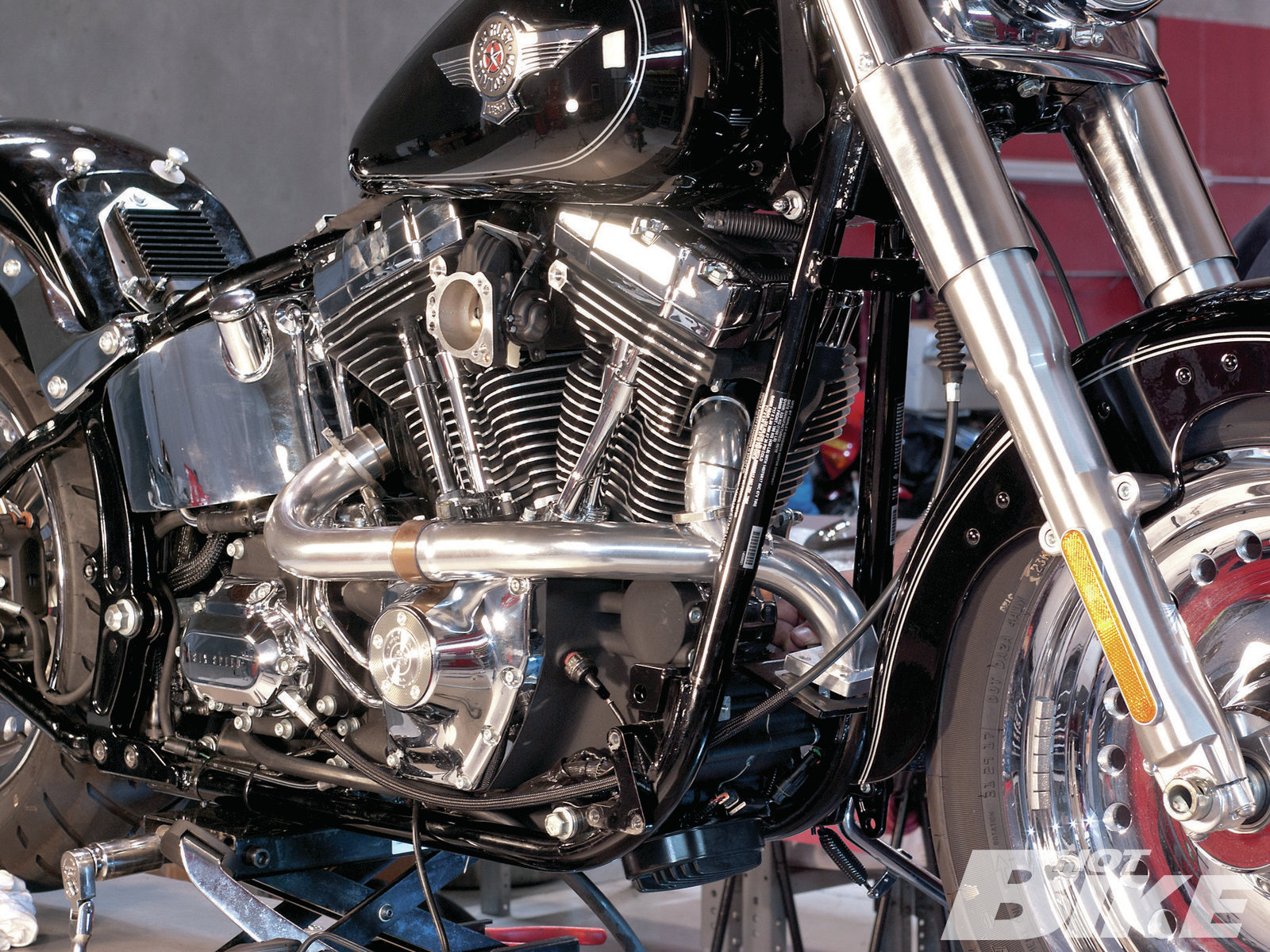 05. Next, the 3/16-inch turbo mounting plate was installed. The plate mounts to the front engine mounts. The rigid mount prevents any stress being applied to the header assembly. The fully ceramic-coated, stainless exhaust header mounts to the top of the mounting plate. The 2-into-1 design routes all the exhaust’s heat energy from the exhaust ports into the turbine wheel of the turbo. The header has a slip joint for thermal expansion to prevent cracking and for ease of installation. 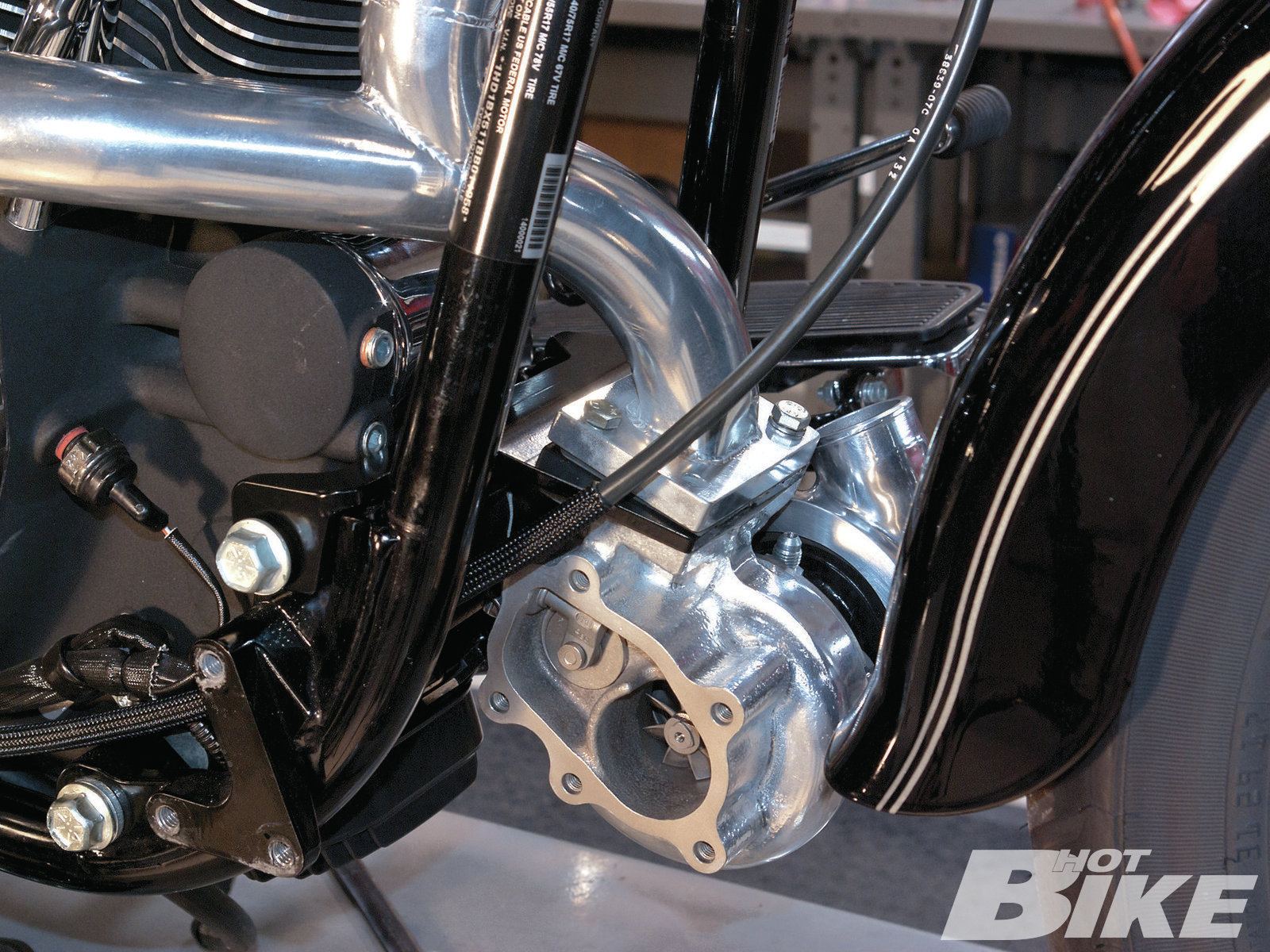 06.The high-effciency ball bearing turbo was then bolted to the underside of the mounting plate. The turbo produces 8 psi of boost from 3,000 rpm to the rev limiter, providing instant boost from cruising speed, which means never having to downshift to accelerate quickly. To feed oil into the turbo’s ball bearing section, an oil line runs from the factory pipe plug (yellow arrow) on the oil flter mount to the ftting in the center of the turbo housing (red arrow). 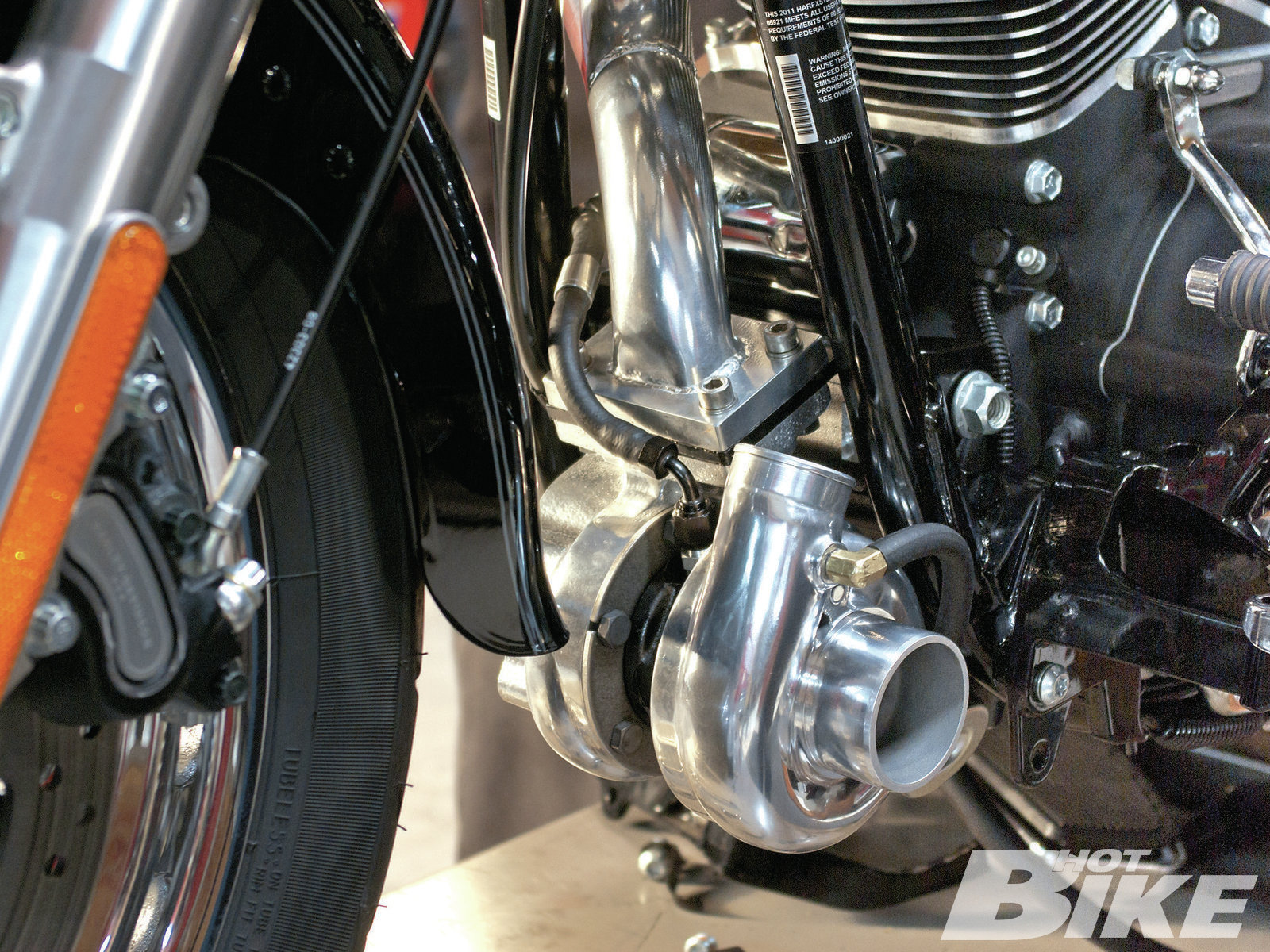 07. Here you can see that the feed line has been installed (yellow arrow). On the pressurized side of the system, the turbo wastegate is mounted to the compressor housing to control boost pressure to the engine. The wastegate sets just behind the turbo, under the Harley’s frame. 08. The mandrel-bent exhaust was then bolted to the turbo. As you can see, it tucks tight to the frame and provides plenty of foorboard clearance. Also notice the oil line bolted to the underside of the turbo (arrow). This line sends the oil from the turbo to the scavenging pump. 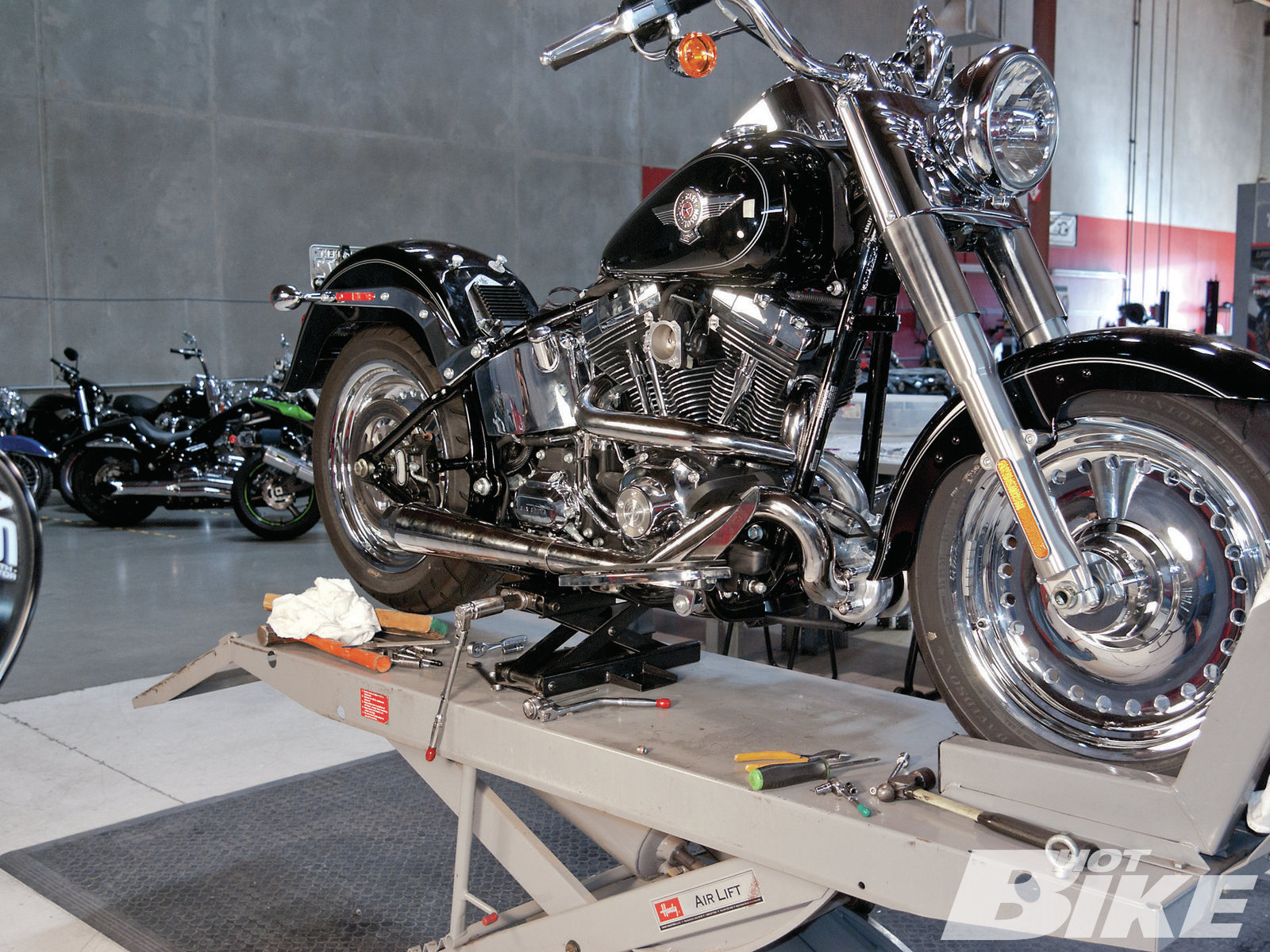 09.Next, the megaphone muffer was bolted to the exhaust. The muffer has a high-fow outlet with minimal backpressure and gives the Harley its menacing rumble.

10. Here we see Sean bolting the billet aluminum mounting plate for the intercooler onto the throttle body.

11. Compressed air from the turbo can get very warm. To cool the incoming air, a stylish aluminum intercooler scoop channels the rushing wind through the air-to-air intercooler, which can drop the intake charge as much as 100 degrees.

11. One of the recommended options to harness all the boosted power is a high-performance clutch upgrade. With so much power on tap, the stock clutch will not last long. For this install, one of AIM Corp’s Variable Pressure Clutches (VP Clutch) was installed. The VP Clutch can reduce clutch lever effort by 40 percent while providing 40 percent more pressure for stronger clutch engagement.

13. Harley’s OE 3.9-g/s fuel injectors would have been woefully inadequate for the boosted power levels this bike will see. Sean had custom 7.5-g/s injectors created to replace the factory versions. The high-f ow injectors can support 200-plus horsepower.

14. Although the Dynojet Power Vision was used to tune the factory ECM with a custom turbo-specif c calibration map for spot-on air and fuel ratios, Dynojet’s Power Commander was piggybacked to control the additional fuel and timing needed under boosted conditions.

15. With everything installed, the Fat Boy was then put on the dyno for some f nal results. In stock trim, the Fat Boy managed 70.21 hp and 88.48 lb-ft of torque. Under the guidance of the SRTS, the bike now makes an absurd 141.52 hp and 138.13 lb-ft of torque. As you can see, the kit doubled the bike’s stock hp output and boosted torque by more than 55 percent! Sure it’s a pricey investment, but can you really put a price on the amount of fun you could have with this much power? Plus it’s important to keep in mind, with some internal engine mods, the results could be insane! And if you decided to sell the bike you could always pull the system off the bike and install it on another bike.

There are plenty of clichés to describe the desire for more power in nearly any engine type. “There’s no replacement for displacement,” and “Injection is nice, but I would rather be blown,” are two that first come to mind. There exists some truth in each statement as both styles of build choices have their merits. We have featured nearly every type of modification and power-adder on all sides of the horsepower game by showing you plenty of tech and bikes with everything from big cubic inches to superchargers and turbo systems, and even nitrous. Time has taught us that the only constant is change, and to carry the torch of the power revolution, we bring you the exclusive on this new turbo kit from Sean Ray Turbo Systems (SRTS).

We have featured turbo bikes in the past and for good reason; they make huge gains at the rear wheel! By pressurizing the air charge and controlling the fuel and timing curves, an EFI bike can make more than double the original horsepower levels without ever cracking open the engine. Sean Ray has developed a turbo system for the ’01-12 Harley Softail line » featuring an air-to-air intercooler, larger injectors, and a remote turbo oiling system. Sean has an extensive engineering background turbo charging various vehicles. Back in 1994 Sean worked for Aerodyne Corporation developing large-scale production Harley turbo kits. After that he helped develop the “almost-to-production” Buell turbocharged Diablo with Buell and Siemens/VDO. Currently working as an Engine Management Systems engineer for Delphi, Sean recognized the need for a better mousetrap and developed his own turbo kit as a response to market desire. After manufacturing a variety of one-off kits that earned a pile of dyno shootout trophies, Sean recently came up with his first production run of turbo kits for Softails (MSRP $7,995). Sean designed the kits to provide instant positive boost from cruising speed so you don’t have to downshift to accelerate quickly or have to wait for power to arrive. He also wanted the kits to be clean looking, work well, have good ride-ability, and deliver big horsepower and torque numbers.

When you look at a SRTS turbo you may notice it looks a little different than some other kits that you may have seen, most notably the placement of the turbocharger. » The turbocharger is mounted solidly to a turbo mounting plate that is attached to the front of the engine for enhanced exhaust header durability. This design prevents the turbine heat from being transferred to the rider and improves engine and charge cooling. Heat shields and ceramic-coated headers are included to further reduce heat transferred to a rider’s leg area. A custom high-efficiency, ball-bearing turbo is oil fed from the stock oil system. Oil flows from the oil filter mount to the turbo’s ball bearing center section, then is scavenged out by a positive displacement oil pump. The oil pump returns the oil through a custom oil return line back to the oil tank.

The intercooler included in the kit was designed with a 1-psi pressure drop at 9-psi boost pressure for high efficiency. An aesthetically pleasing scoop was created to force air through the intercooler while also cooling the engine. The billet aluminum plenum directs the air into the » throttle body with minimal pressure drop. The SRTS kit utilizes the stock ECM flashed with a custom calibration from the Dynojet Power Vision and boost feedback from a Dynojet PCV. In order to have a reliable turbocharged air-cooled engine with today’s variety of fuels, some sort of knock detection must be incorporated in the ECM’s software strategy. The ECM’s Delphi ION sense knock protection technology is still in place and very effective at eliminating knock. Below atmospheric pressure the engine is calibrated through the Power Vision, but on boost the PCV takes over for fueling and spark control. Both are necessary for a robust calibration when adding larger injectors and forced induction. HB

Adding Some Storage to the Blackline

Farewell Chet This past February, the motorcycling industry lost an unforgettable personality and motorcycle enthusiast. Chester “Chet” and “OEP” Anthony […]

Indian Dominates King of the Baggers 2022 Season Opener in Daytona