One hundred fifteen years—it’s quite the landmark. For that number of years, Harley-Davidson has become part of our blood in America and across the globe. H-D motorcycles have represented freedom in a way that hasn’t been previously experienced by millions of riders worldwide.

To celebrate the 115th milestone, H-D is hosting a rally in the motherland where it all started—Milwaukee, Wisconsin. From Wednesday, August 29, to Sunday, September 2, there will be events all throughout the week and into the weekend. What better way to celebrate Labor Day than with your brothers and sisters in iron?

There’s going to be so much to do all throughout town, so make sure to plan ahead, while you’re out and about to make a pit stop at a local dealership to pick up your piece of history with one or three items from the exclusive 115th anniversary collection (if you can’t make it into a brick and mortar, these items are always available on Amazon). Each selection within the collection has been inspired from the rich nostalgic history that surrounds the brand. From tees to other casual threads to full-on riding jackets, helmets, and all kinds of accessories in between, show your pride and celebrate with some new anniversary gear.

Now, get out there and ride the wave of true freedom. Here’s to another 115 years, and then some. 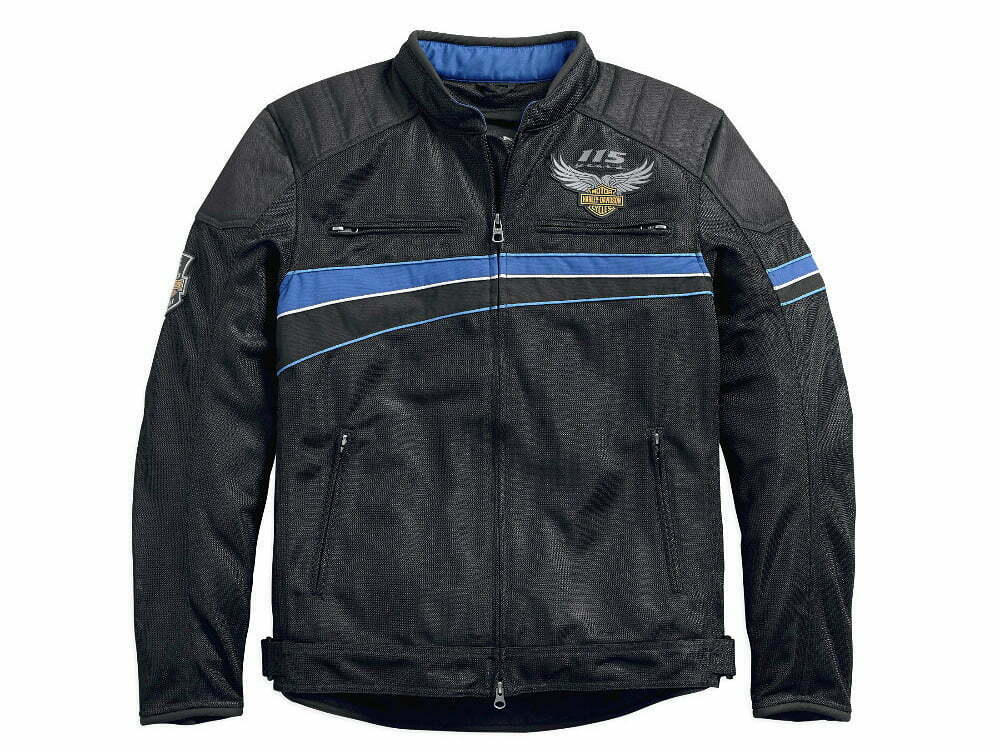 Every rider needs a dependable, stylish jacket to help guide him down the highway.

Every rider needs a dependable, stylish jacket to help guide him down the highway. Harley-Davidson has designed the anniversary mesh riding jacket to meet safety and comfort standards while styling it to properly suit the celebration.

Reinforced elbows and shoulders as well as armor pockets and an action back make this jacket a legitimate piece of riding gear, while the updated “anniversary blue” contrast piping, custom hardware, and killer patches create an undeniably prideful statement. Whether it’s for your morning coffee or if you’re taking juice or water to go, this 115th anniversary edition stainless steel travel mug gets you caffeinated and hydrated while you’re out and about.

A plastic wall interior allows for optimum temperature control for hot or cold beverages to remain exactly how you want it. The anniversary artwork is emblazoned right on the front, which makes this travel mug the perfect companion piece for your next cruise or commute. Ladies, listen up! There are very few leather riding vests on the market right now that offer the amount of style and Harley pride than this 115th anniversary vest from H-D.

The hints of blue anniversary details instantly separate this vest from all others straightaway. Other 115th anniversary details such as hardware and graphics further affirm the pedigree of this quality garment. The midweight buffalo leather offers just the right amount of badassery to this classy, historical piece. 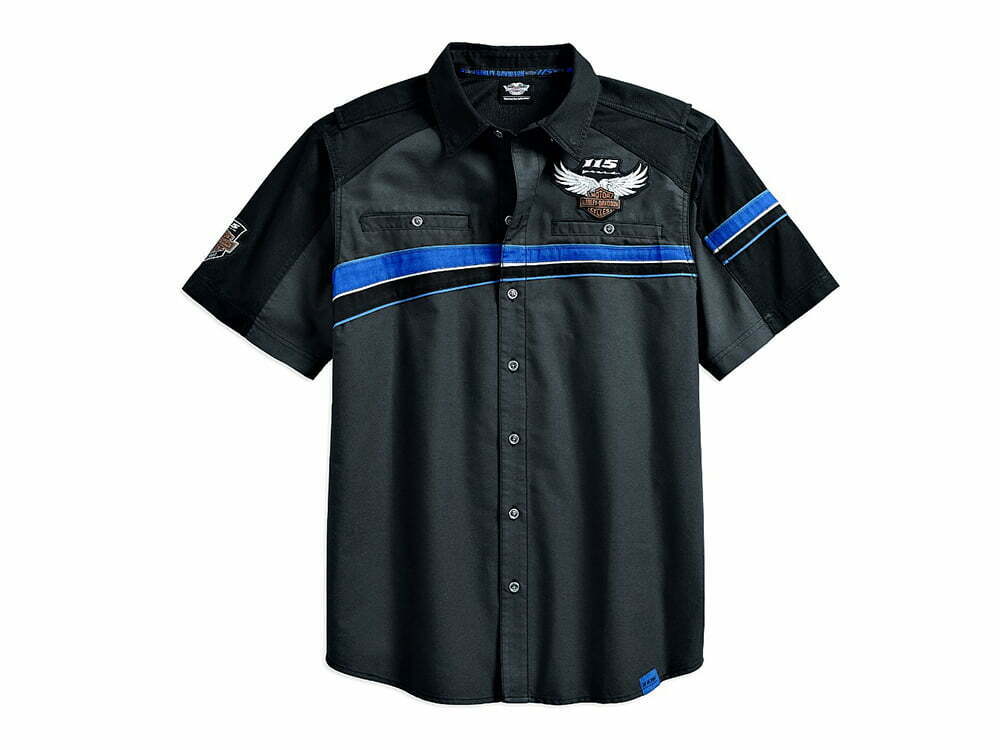 Short sleeve button down garage type shirts should be a staple in your wardrobe.

If you don’t have one, now is the time to get one. In fact, start with the H-D 115th anniversary shirt.

The vented action back keeps this shirt feeling as comfortable as possible, and contrasting stripes and piping on left sleeve, front, and back keep this shirt 100 percent identifiable as being a special garment from the 115th anniversary collection. Chest and sleeve patches, along with a large printed applique graphic on back further validate this shirt’s celebratory nature. The sleeveless shirt style is always a winning bet, so of course Harley-Davidson has included a version of it in the 115th anniversary lineup of guy’s gear.

To honor the huge milestone, the classic shirt was given the royal blue side stitch detail treatment to commemorate the huge accomplishment. To further adorn the shirt, exclusive 115th hardware, front patch, and large soaring eagle embroidery on the back were added to give this piece a reason in itself to celebrate. 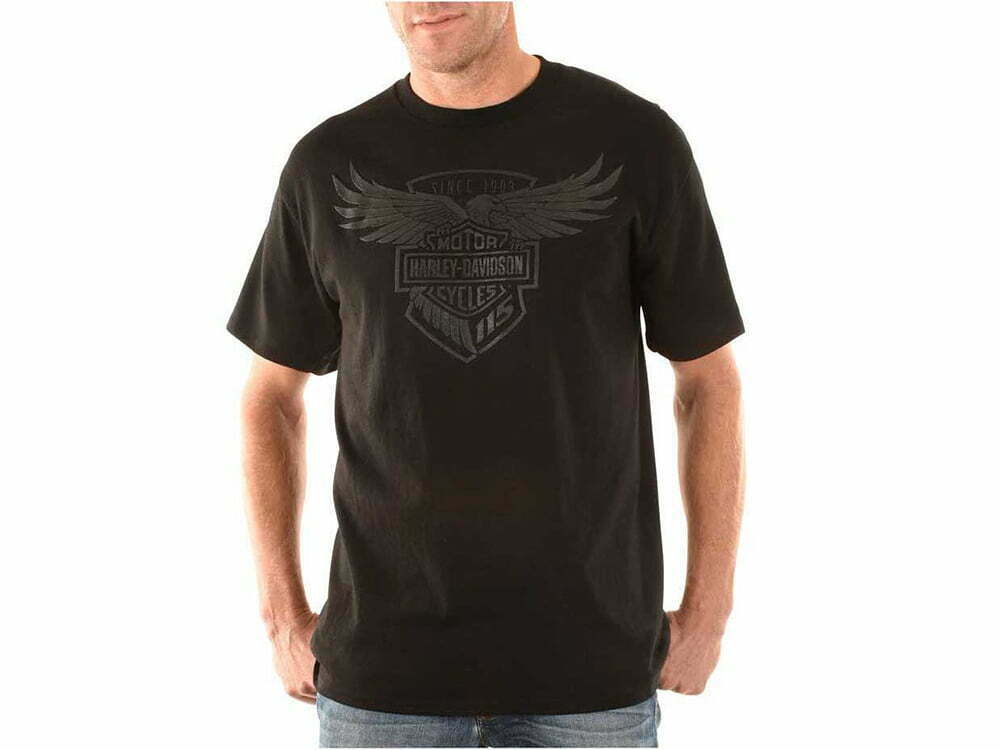 Every guy needs a tee, and every Harley-Davidson fanatic needs a shirt that is a celebration in itself of the brand’s 115th anniversary.

The shirt is cut from 100 percent cotton jersey with a light enzyme wash that gives it a comfy, lived-in feel all day long. The signature anniversary eagle graphic gives this one an unmistakable appearance that marks this very special anniversary.

Okay, so you have invested in a new Harley-Davidson Touring model equipped with the famed Milwaukee-Eight powertrain. Congratulations! But just […]

2004 Harley-Davidson Electra Glide – Debagged Photo: Ed Subias Every year we partner with a builder and fabricate a custom […]

SBS is Back in Daytona – Permanently!

Contrary to popular belief, this is not the company food truck. Courtesy of SBS On the heels of the 75th […]