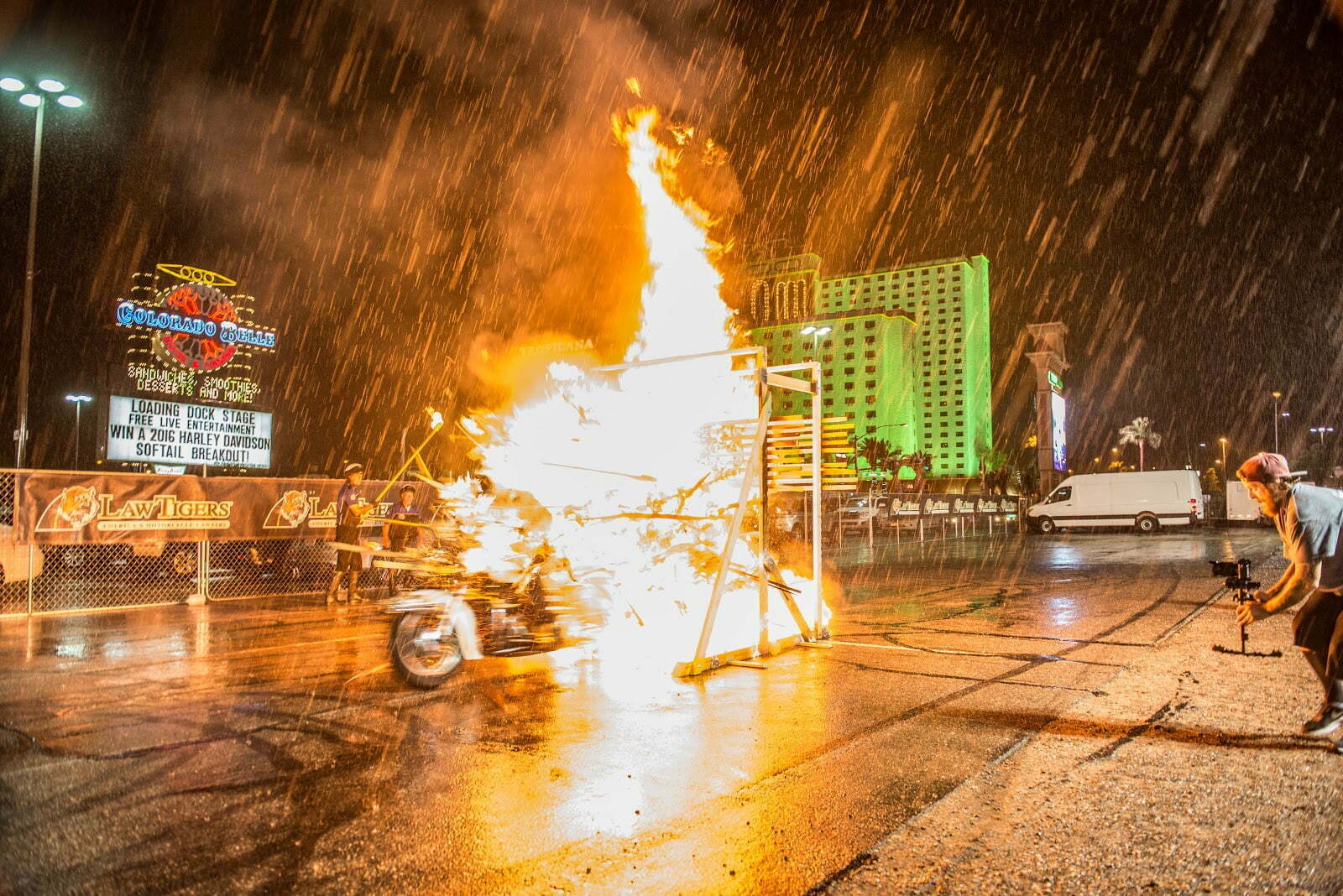 Laughlin 2017 is a motorcycle rider’s dream, getting out on the open road, riding from destination to destination with your friends. To make your trip easy and affordable, the Southern California Harley-Davidson Dealers Association and Russ Brown Motorcycle Attorneys are offering Early Bird 4 day, 3 night hotel room packages at the Official Harley-Davidson Headquarters, Colorado Belle and Edgewater Casino Resorts. Colorado Belle and Edgewater Casino Resorts are sister properties that sit side by side on the West bank of the Colorado River where Nevada, California and Arizona meet and are located in the center of the Laughlin Strip with a variety of gaming, entertainment & dining options. All room packages must be booked online through the Southern California Harley-Davidson Dealers Association to receive discount. Additionally, each Early Bird room package will receive 2 tickets to the Laughlin 2017 Harley-Davidson party, 2 commemorative pins, limited edition patches and a special gift from Russ Brown Motorcycle Attorneys. Book now. Purchase room packages and all info at: www.Laughlin2017.com

“Get your bike out and ride! We want riders to ride and party for a few days with Harley-Davidson! Join us in Laughlin.” says Mark Ruffalo, President of the Southern California Harley-Davidson Dealers Association “I’m very excited to be a part of such a unique event for riders. It feels like the old days, I had a great time last year and look forward to riding out to Laughlin again this year!” 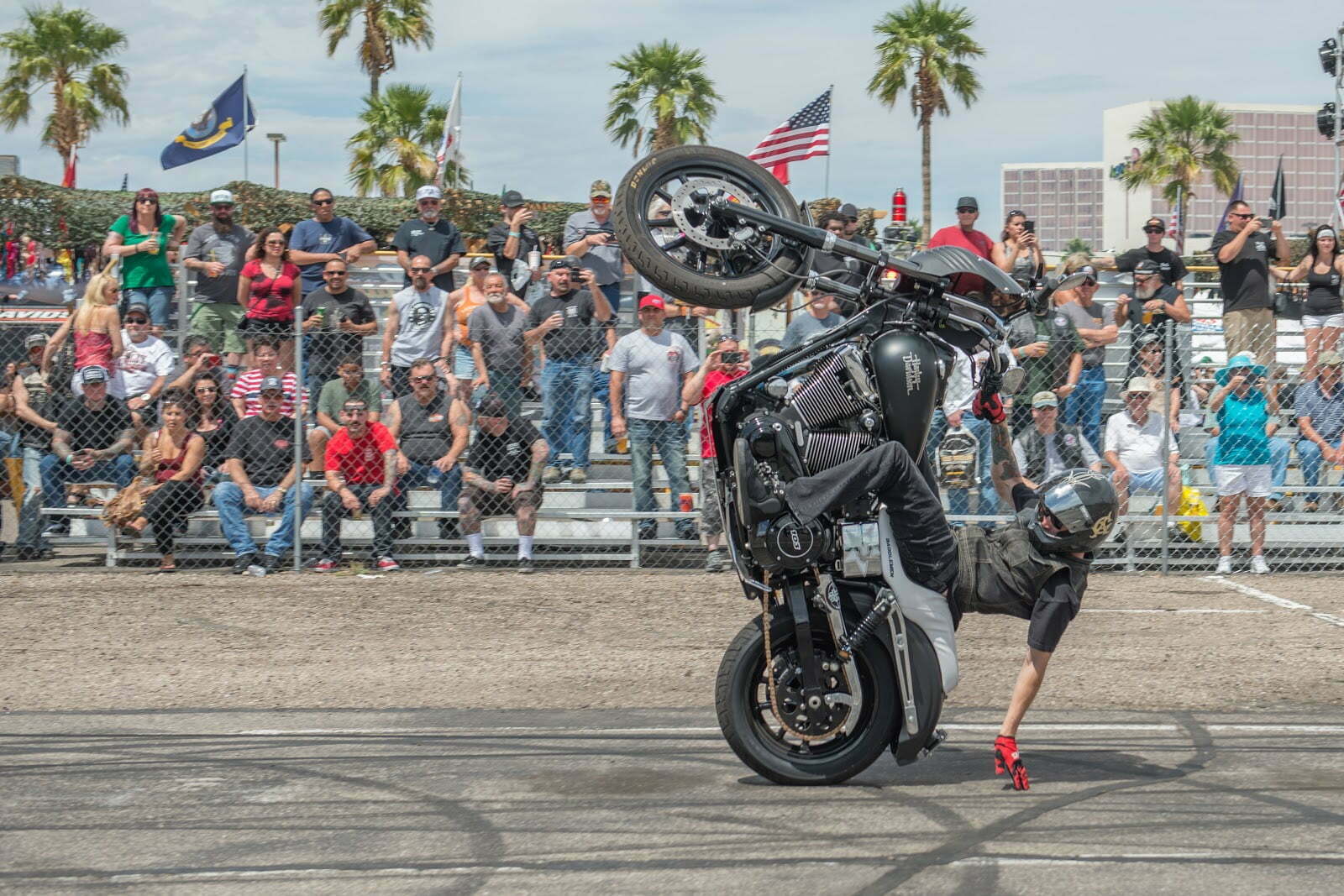 Photo of Scott Griffin from the Victor McLaglen Motor Corps riding through a firewall in the rain at their performance at Harley-Davidson Laughlin 2016.

Check out [this video](https://www.youtube.com/watch? v=3NbdOUAgDB0) of the ride, party and experience you can expect at Laughlin 2017.

In the parking lot of in front of the Colorado Belle Harley-Davidson will display the 2017 line up of Harley-Davidson motorcycles including the newly released ninth generation of its Big Twin motor, called the Milwaukee-Eight. Attendees will be able take free demo rides on bikes throughout the weekend. Additionally Southern California Harley-Davidson Dealers Association will host daily performances from freestyle motorcycle stunt riders UNKNOWN Industries and “World Champion” motorcycle stunt & drill team Victor McLaglen Motor Corps, next to a pop up bar from world famous Hogs and Heifers.

About the Harley-Davidson Motorcycle Dealers Association of Southern California

Founder Russ Brown, the original motorcycle lawyer who rides, started Russ Brown Motorcycle Attorneys in 1975. His lifelong passion for riding naturally led him to help fellow bikers who were being taken advantage of in personal injury cases. As his attention to bikers’ rights and participation in political debates propelled him into the limelight, he quickly became known as the top motorcycle attorney in California, then the U.S. In 2013, Russ was honored to become the first lawyer ever to be inducted into the Sturgis Motorcycle Museum Hall of Fame.

UNKNOWN Industries is a new breed of Harley riders who push the limits of their motorcycles and themselves as they prove to the world what is possible on a bike. UNKNOWN has garnered over 6 million views online of their world famous “Harley Wheelies” YouTube series. In July of 2016 UNKNOWN released a new mini series on YouTube titled, “The UNKNOWN Ride”, you can view the video here https://youtu.be/pqmPsbZZVTM UNKNOWN’s team of Riders have traveled the country and performed hundreds of closed course Freestyle Harley Riding demos at events ranging from NASCAR, the Sturgis Motorcycle Rally, Supercross, UFC, Harley-Davidson dealerships, X-Games, military bases, massive music festivals, the Hot Bike Tour and various other events across the US. 2014 included the release of UNKNOWN’s second feature length movie, “Into The UNKNOWN” on both DVD and iTunes. UNKNOWN co-founder and rider Nick Leonetti was featured on cover of Hot Bike magazine in 2014. UNKNOWN co-founder and rider Buddy Suttle was featured on cover of Baggers magazine in 2015. Additionally UNKNOWN Riders have been featured in TV shows, music videos, TV commercials, online web-series shows, other magazines, and more. Watch UNKNOWN’s “Harley Wheelies” series on YouTube: [www.youtube.com/ unknownindustries](http://www.youtube.com/ unknownindustries)

1: Covelle starts all his classes the same way: talking about how he got started in metalwork doing aluminum dragster […]

I have known Dan Collins for years and have considered him a friend since the day we first met. Dan’s […]

WanaRyd’s new Adrenaline wheel in their Stark-line Black and Aluminum finish will get you all worked up! It is one […]