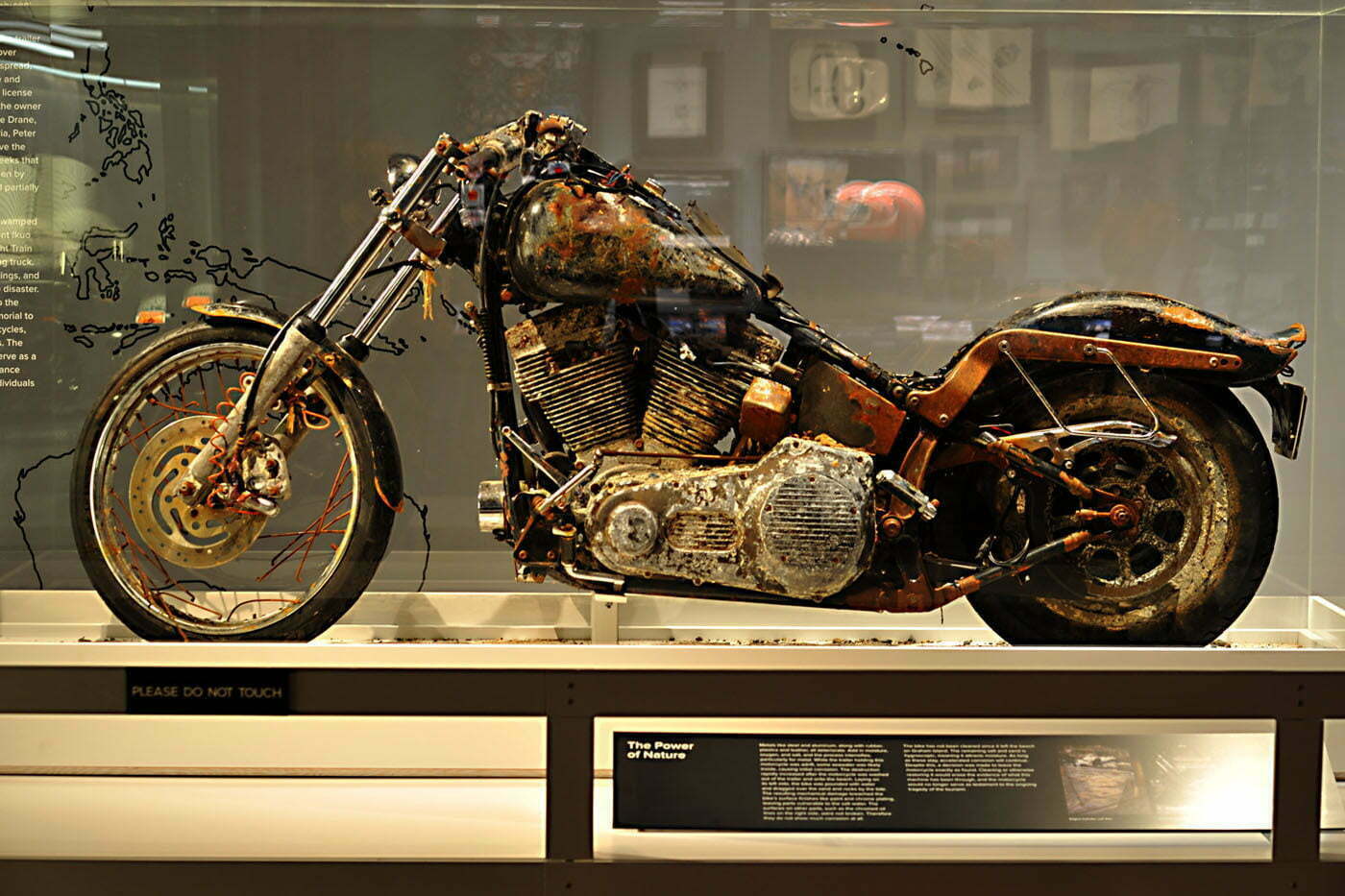 MILWAUKEE, Oct. 24, 2012 /PRNewswire/ -- Today the Harley-Davidson Museum unveils a special display featuring Ikuo Yokoyama’s Harley-Davidson® motorcycle that drifted for more than a year across the Pacific Ocean following the tragic tsunami that devastated parts of northern Japan last year. The 2004 Harley-Davidson FXSTB Softail Night Train, recovered off the coast of British Columbia by Peter Mark, is being displayed at Yokoyama’s request.  He asked to have the motorcycle preserved in its current condition and displayed at the Harley-Davidson Museum as a memorial to those whose lives were lost or forever changed by the 2011 tsunami in Japan. “We’re truly humbled to display Mr. Yokoyama’s motorcycle,” said Bill Davidson, Vice President of the Harley-Davidson Museum. “This motorcycle has an amazing story to tell, and we are honored to be able to share it.” The remarkable story of the motorcycle’s survival and recovery made international headlines after Mark found it washed ashore on a remote beach on British Columbia’s Graham Island at low tide. He discovered the motorcycle, still bearing its Japanese license plate, in a container where the bike was being stored by Yokoyama. Working with news agencies and representatives from Deeley Harley-Davidson Canada and Harley-Davidson Japan, contact was made with Yokoyama, who lost his home and currently lives in temporary housing in Miyagi Prefecture, Japan. Still struggling to rebuild his life in the aftermath of the disaster, Yokoyama declined Harley-Davidson’s offer to return the bike to him, although he was grateful for the offer and touched by the outpouring of support from Harley riders around the world. The Harley-Davidson Museum is open daily from 10 a.m. – 6 p.m., with the exception of Thursday, when it is open until 8 p.m. **About the Harley-Davidson Museum **The Harley-Davidson Museum is located at 400 West Canal Street in Milwaukee and provides a glimpse of history and culture as you’ve never seen it before – through the lens of Harley-Davidson Motor Company. The Museum, a top destination in Milwaukee and the state of Wisconsin, is open year-round and attracts hundreds of thousands of visitors to the area each year. The 20-acre campus offers abundant and free parking, and includes Motor® Bar & Restaurant and The Shop. For more information on the Museum’s galleries, exhibits, special events, tickets and more, visit the new and improved h-dmuseum.com.

Installation of the W&F; GPS system is quick and painless, with no major modifications or complicated wiring. It plugs right […]

Ashmore’s Antics | Babes Riding Out Photos: Cindy DuLong Hi! I am Ashmore Ellis, and I was one of the […]