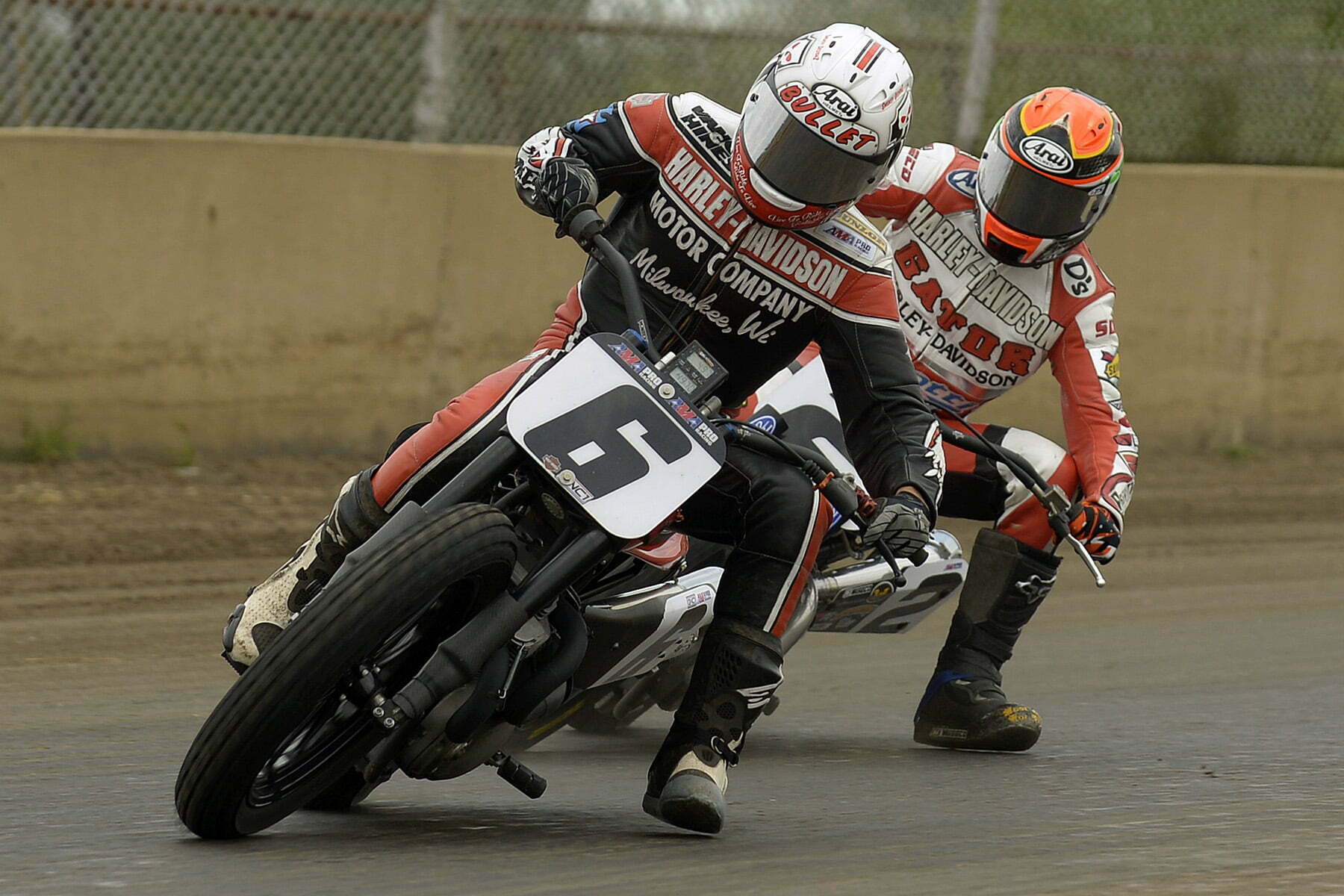 Baker and Coolbeth hard at work.

The Wrecking Crew riders will compete with passion and intensity befitting the long history of Harley-Davidson racing. Part of that story is currently being told at the Harley-Davidson Museum in its special exhibit “Racing Machines from the KR to the XR” that explores the role the Harley-Davidson engineering team played in creating the legendary bikes that have dominated race tracks for three decades after World War II. Race competition seen through the camera lens is also the focus of “Race Day: Photos from the Flat Track” that explores the work of preeminent racing photographer Dave Hoenig, a special exhibit also at the H-D Museum until Sept. 5, 2016.

Brad “The Bullet” Baker will be racing for a third season on the Harley-Davidson Screamin’ Eagle Factory Team. In 2015, Baker won on the Lima, Ohio, half-mile and the Indy Mile in Indianapolis and claimed two other podium spots. He missed four races due to injury and placed eighth in GNC1 series points. Baker was a bronze medalist at the inaugural Harley-Davidson Flat Track at X Games Austin 2015. Baker was just 20 years old when he won the 2013 AMA Grand National Championship riding for the Dodge Brothers Racing team. Baker won the AMA Pro Singles Championship in 2009 before moving up to the Expert Twins class and winning the 2011 AMA Pro Flat Track Expert Rookie of the Year Award.

A three-time AMA Pro Grand National champion (2006-2008), the veteran Coolbeth has won 35 times in AMA Grand National competition, more than any active racer in the series. Coolbeth claimed three consecutive titles while racing for the Harley-Davidson Factory Team from 2006 to 2013. Aboard the Zanotti Racing Harley-Davidson XR750 in 2015, Coolbeth won twice and finished fourth in points. He was named the AMA Flat Track Rookie of the Year in 1994 and won his first Grand National race in 2002.

Jake Johnson won consecutive AMA Pro Grand National championships (2010-2011) on Zanotti Racing Harley-Davidson XR750 motorcycles and has won 18 times in AMA Grand National competition. He returns to the Zanotti team for 2016. In 2015, Johnson raced for the Harley-Davidson Factory Team in four races filling in for injured Brad Baker and finished twice on the podium. Johnson won the AMA Pro Singles championship in 2006 and was AMA Flat Track Rookie of the Year in 2002.

‹ Harley-Davidson Low Rider S › SBS is Back in Daytona – Permanently!

Zipper’s Performance is synonymous with horsepower. The company recently released its new catalog for 2010 packed full of plenty of […]

Say what you will about the V-Rod; it has its place in motorcycling like most any other popular mass-produced make […]

When it comes to gas tank art, we see a full gamut of it here at Hot Bike, from mild […]