Indian Motorcycle, America’s first motorcycle company, is proud to present the “The Redeemer” built by Hollister Powersports of Hollister, Calif., utilizing the new Indian® Chieftain Dark Horse motorcycle, a bike that is an ideal base for a custom.

A bagger with an undeniable presence, the 2016 Indian Chieftain Dark Horse offers a ton of matte black, a flicker of chrome, and a wealth of standard features to roll as one of the most badass American-made V-twin bikes on the market. Hollister’s approach to customizing took the Chieftain Dark Horse and added modifications that would be easily approachable for any owner who wants to recreate the look with their own vision.

“We installed the 14-inch accessory Indian Motorcycle Ape-Hangers, but painted them matte black,” Sotelo says. “The kit includes a longer clutch cable, and the brake cable and wiring are long enough so no modifications are needed, which makes it really easy for the weekend mechanic to install.”

The engine jugs remain as they did when they left the factory, but Hollister put a little matte paint on the otherwise gloss side covers and added highlighting to the ‘Indian’ script on the air-cleaner in matte silver to stand out.

To add even more style, Authentic Indian Motorcycle billet floorboards were added. The stock seat, which comes with white stitching, was re-covered using black stitching. While the seat’s studs are normally chrome, Hollister had its upholsterer brush them to give the look of a stainless steel finish.

Out back, a pair of turn signals were incorporated into the saddlebags to further visually lighten the bike. “We played with different lights, but we just really liked the look of these,” Sotelo says, “so we frenched them into the bags and matted the taillight out.” The saddlebags also received 100-watt Authentic Indian Motorcycle speakers to boost output of the already powerful audio system.

Finally, sticking out from beneath the saddlebags, a blacked out Indian Motorcycle Stage 1 slip-on exhaust with brushed billet tips was installed to offer a snappier throttle response and more bark to the already potent Thunder Stroke 111 engine.

Ultimately, any owner of an Indian Chieftain Dark Horse could achieve the look of the The Redeemer with the availability of more than 300 Chieftain and 150 blacked out Authentic Indian Motorcycle® Accessories and light some custom work. 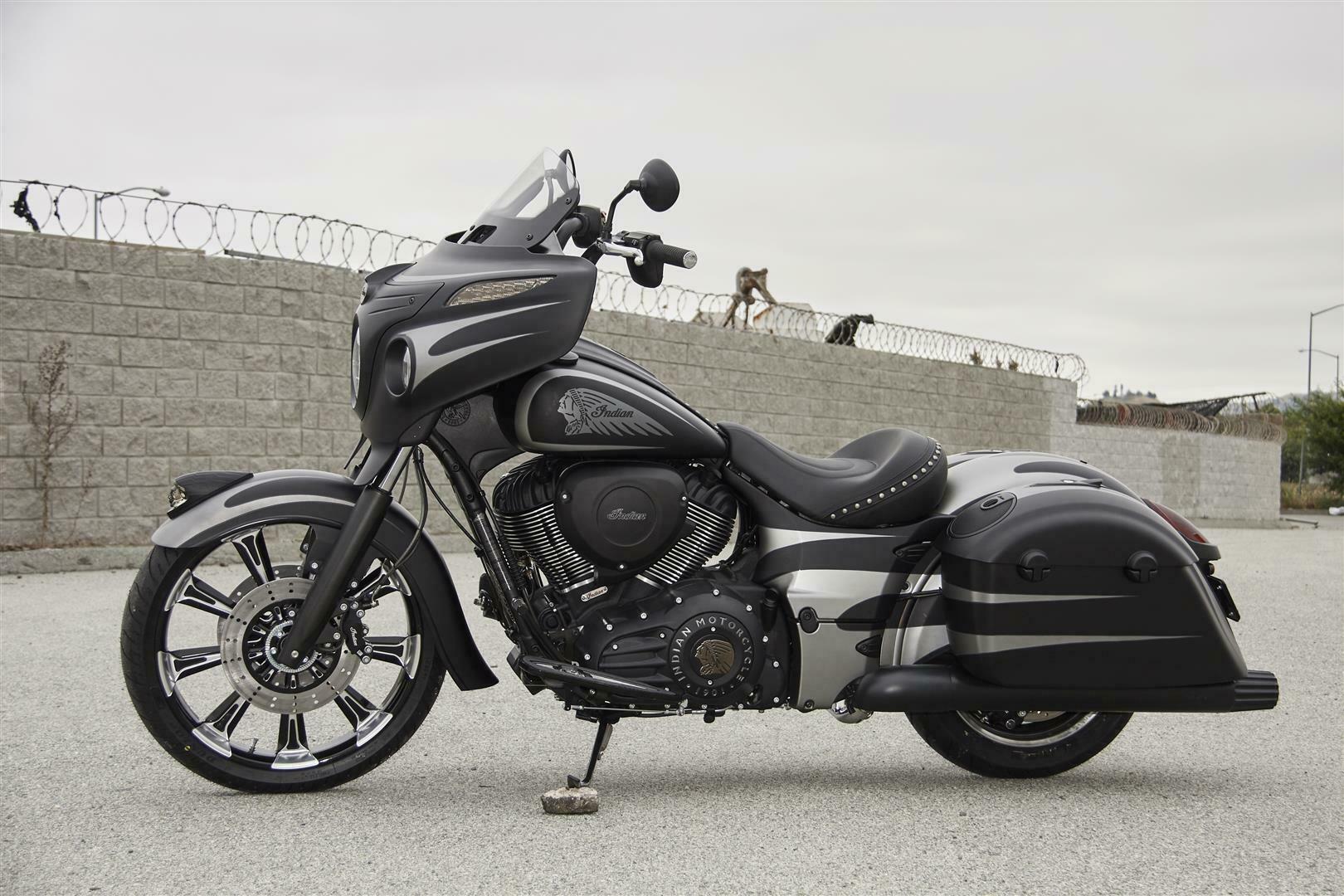 “The guys in Hollister built an obtainable custom – a bike somebody could build themselves and keep highly ride-able rather than just a showpiece,” commented Reid Wilson, Marketing Director for Indian Motorcycle. “Rey and his team will certainly inspire our owners to create their own Chieftain Dark Horse custom, and we can’t wait to see what they do to make the bikes their own.”

“When I saw the bike, I knew right away that it had a ton of potential to customize,” says Rey Sotelo, General Manager of Hollister Powersports. “We were inspired by the history of Hollister and how this great American town is coming back from an unfair bad reputation. We stayed with the matte black theme and used as many Authentic Indian Motorcycle accessories as we could because we wanted the weekend mechanic to be able to recreate something as badass as our custom. Radical customs certainly draw the eye – but we wanted to keep the bike rideable every day.”

Hollister trimmed the stock fender to reveal more of the custom wheel and lighten the overall look of the bike. The fender skirts were cut back and the caliper covers were removed, dramatically changing the front profile of the motorcycle. The fairing is stock, but painted with speed scallops that tie in with the front fender, tank, side panels and saddlebags. The scallops are painted on the rear fender as well, so even if the saddlebags are pulled off the speed scallops theme still plays throughout the bike. 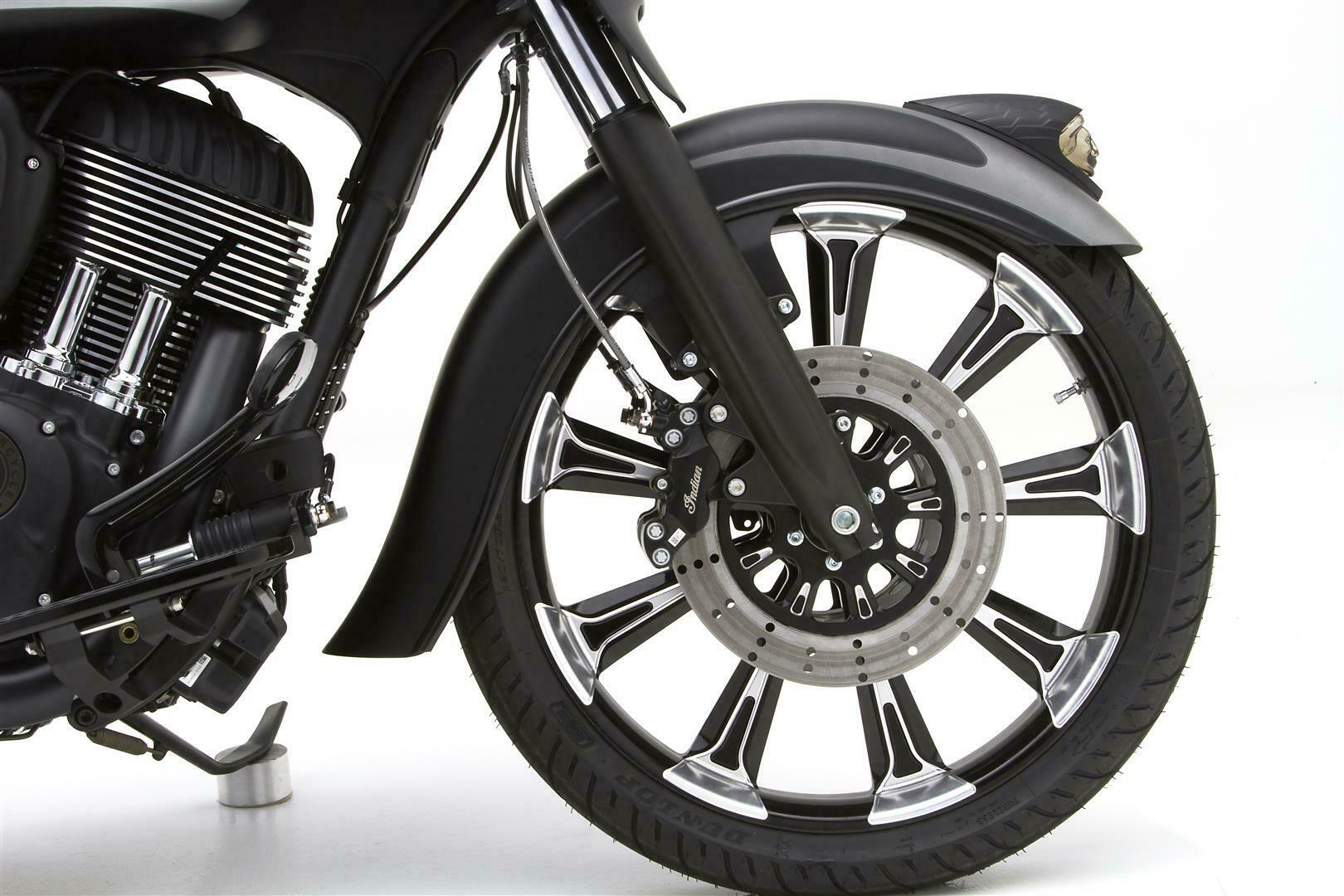 “We wanted to put a 21-inch wheel on it so we chose an option from RC Components,” Sotelo continued. “We liked the aluminum accents on RC’s Raider Eclipse wheel, and knew it would tie in with the paint job and the brushed finish on the motor.”

Check out our latest and greatest custom bikes and bike reviews.

In The Wind | A King Goes Ape