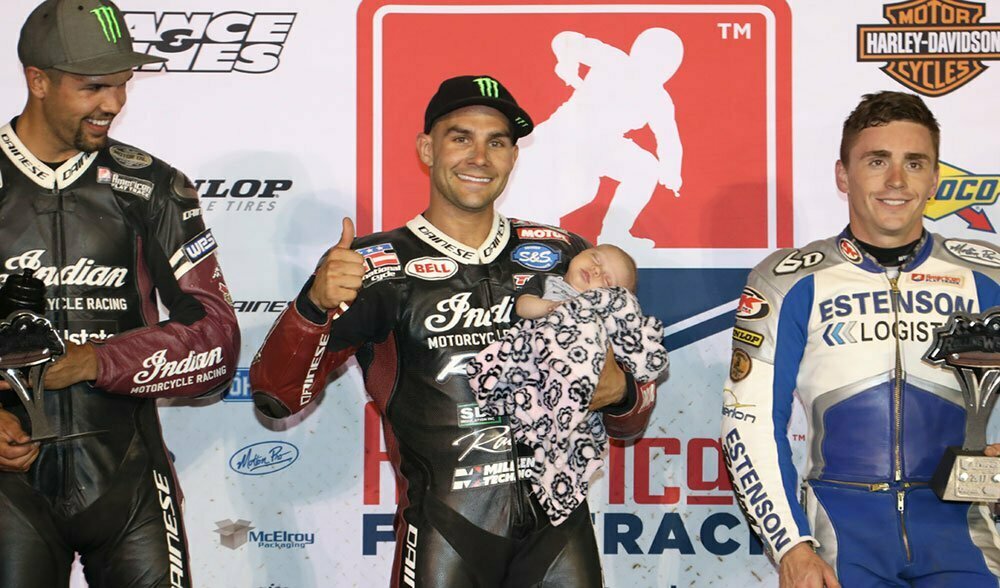 …and winning a baby for his efforts.

Mees and his Scout FTR750 outraced the entire field and passed the checkered flag nearly five seconds before the second-place finisher. With his fifth win of the season, Mees recorded his first career in-season Grand Slam, winning a TT, Short Track, Half-Mile and Mile, an accomplishment only three others have achieved in the history of the sport.

“It felt good to get my fifth win of the season at the Rolling Hills Half-Mile and take back the points lead,” said Mees. “Just over halfway through the season and already scoring a Grand Slam truly showcases how the Indian Scout FTR750 performs on all track types.”

Through 10 races this season Mees and Smith own nine of the first-place finishes. The two Wrecking Crew riders have been battling for the top points position all season long. They have leap-frogged each other the last three races since being tied in total points following the Red Mile. Mees currently sits eight points ahead of Smith, 202 to 194. While Baker earned his seventh podium of the season and remains third in total points with 149.

“Not only is our team extremely talented, but fiercely competitive – just look at Jared and Bryan exchanging points lead,” said Gary Gray, Vice President – Product Development for Indian Motorcycle. “Jared came back following the Lima Half-Mile with a performance of the season and secured the rare in-season Grand Slam. Both Bryan and Brad will be looking to knock him off at the end of the month in Calistoga. It’s great competition within the team and great fun.”

Indian Motorcycle Racing, backed by Allstate Insurance, will look to continue its incredible run as American Flat Track heads to the Calistoga Half-Mile at Calistoga Speedway in California on July 29.

Upgraded Brakes and Clutch with DP-Brakes