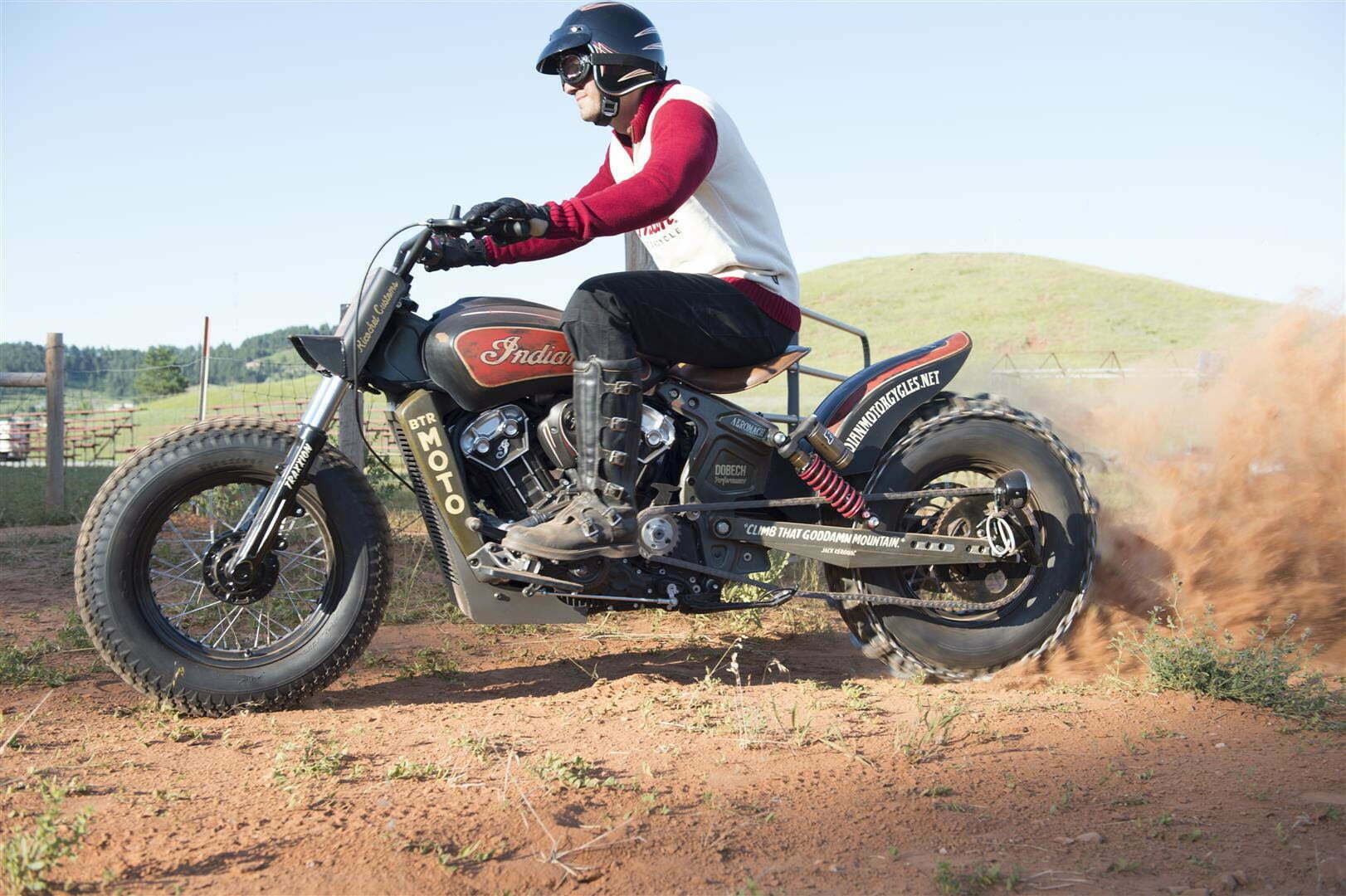 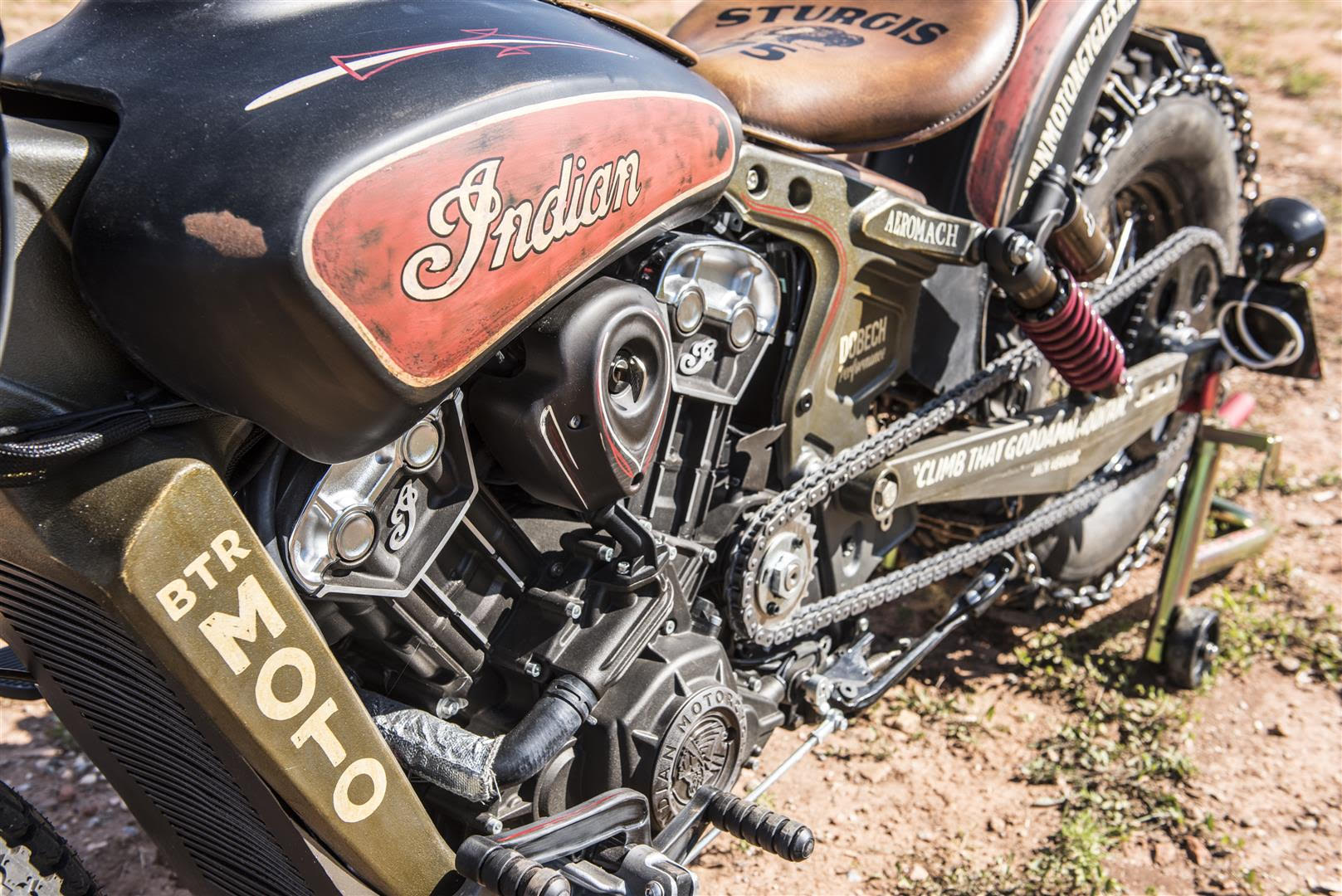 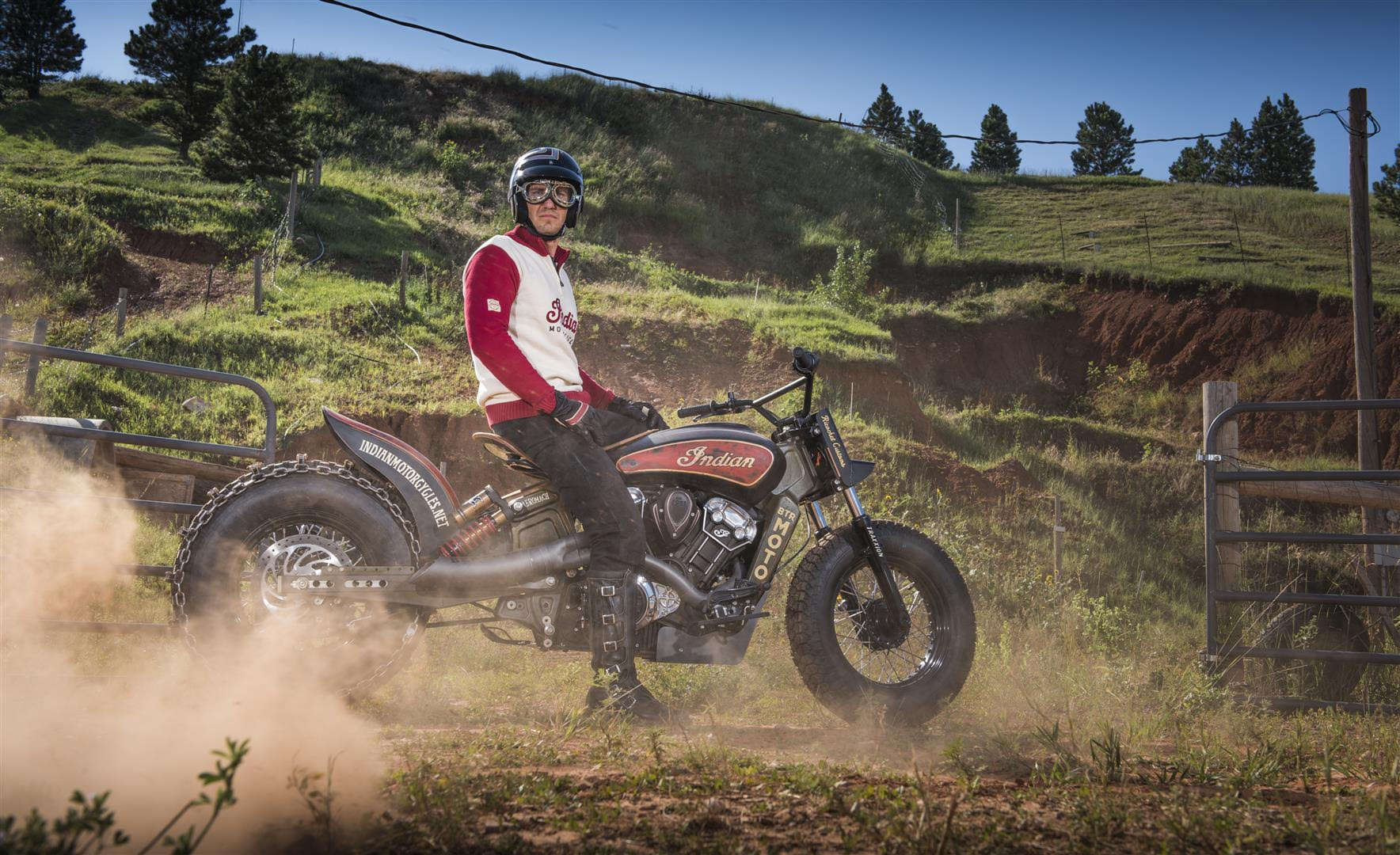 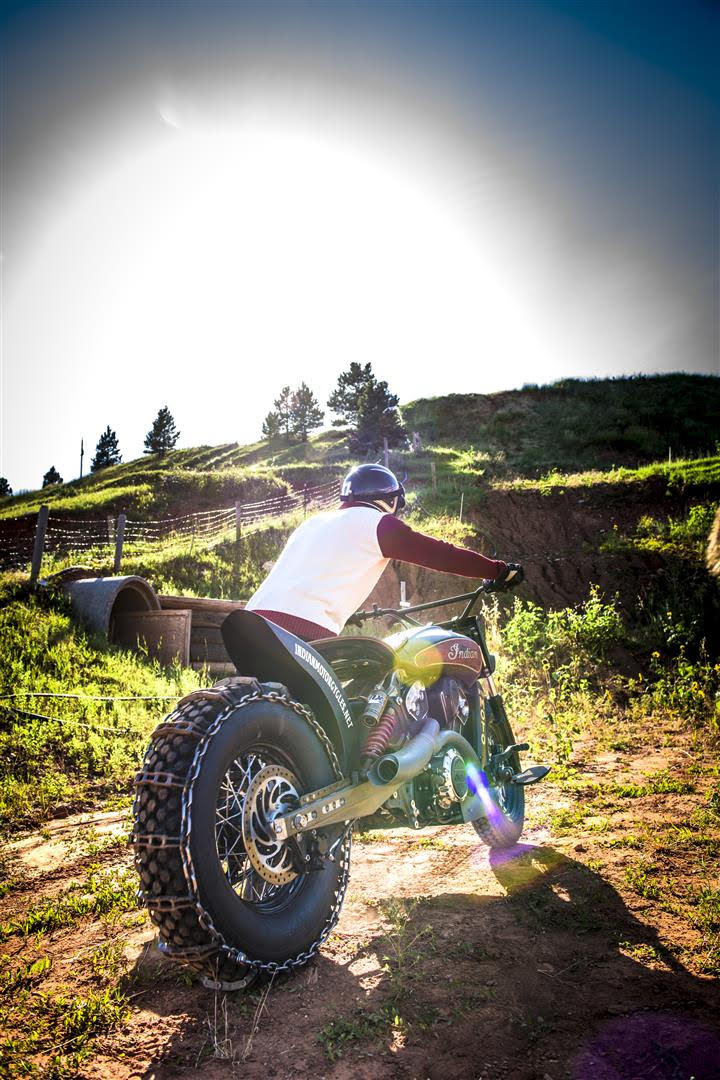 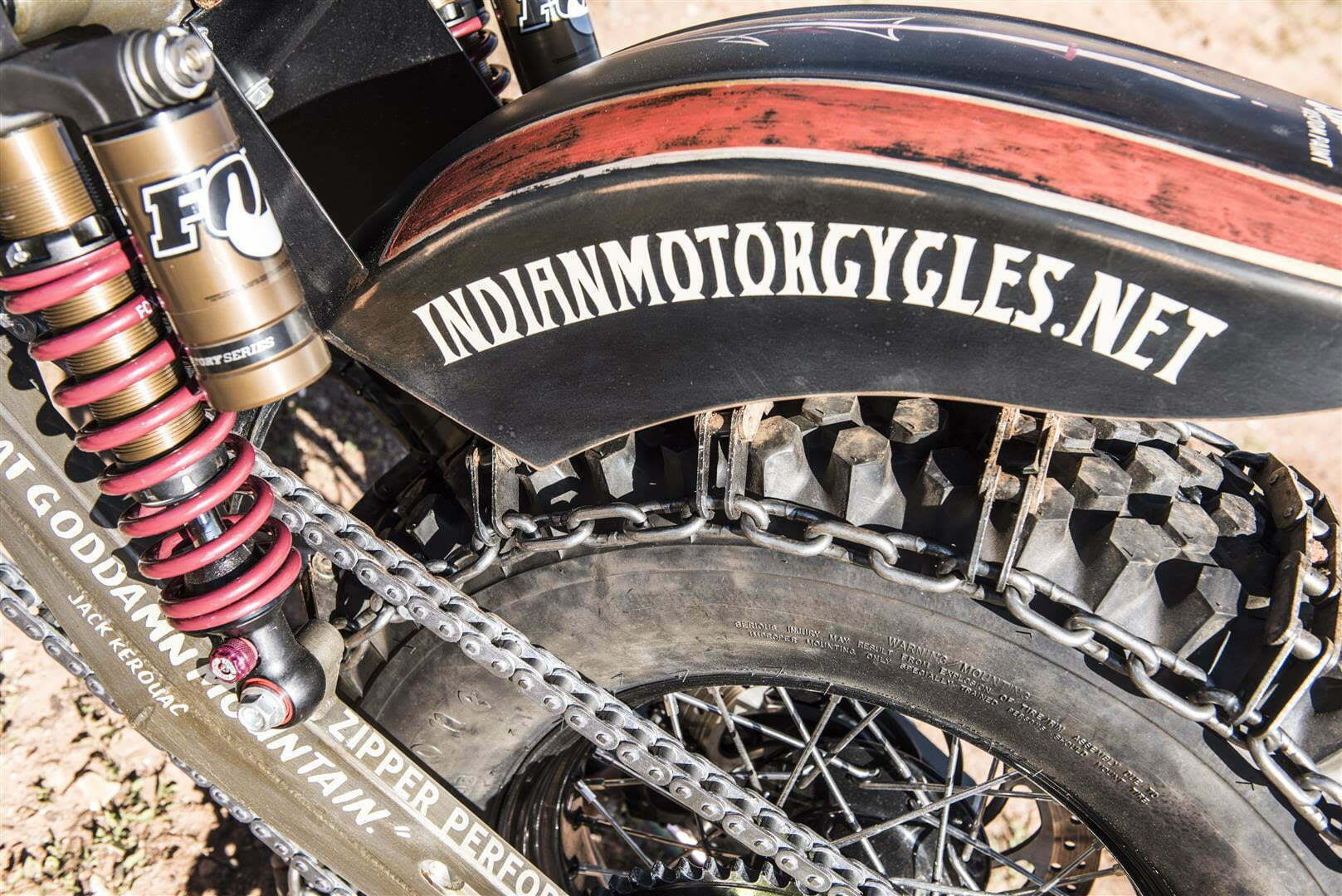 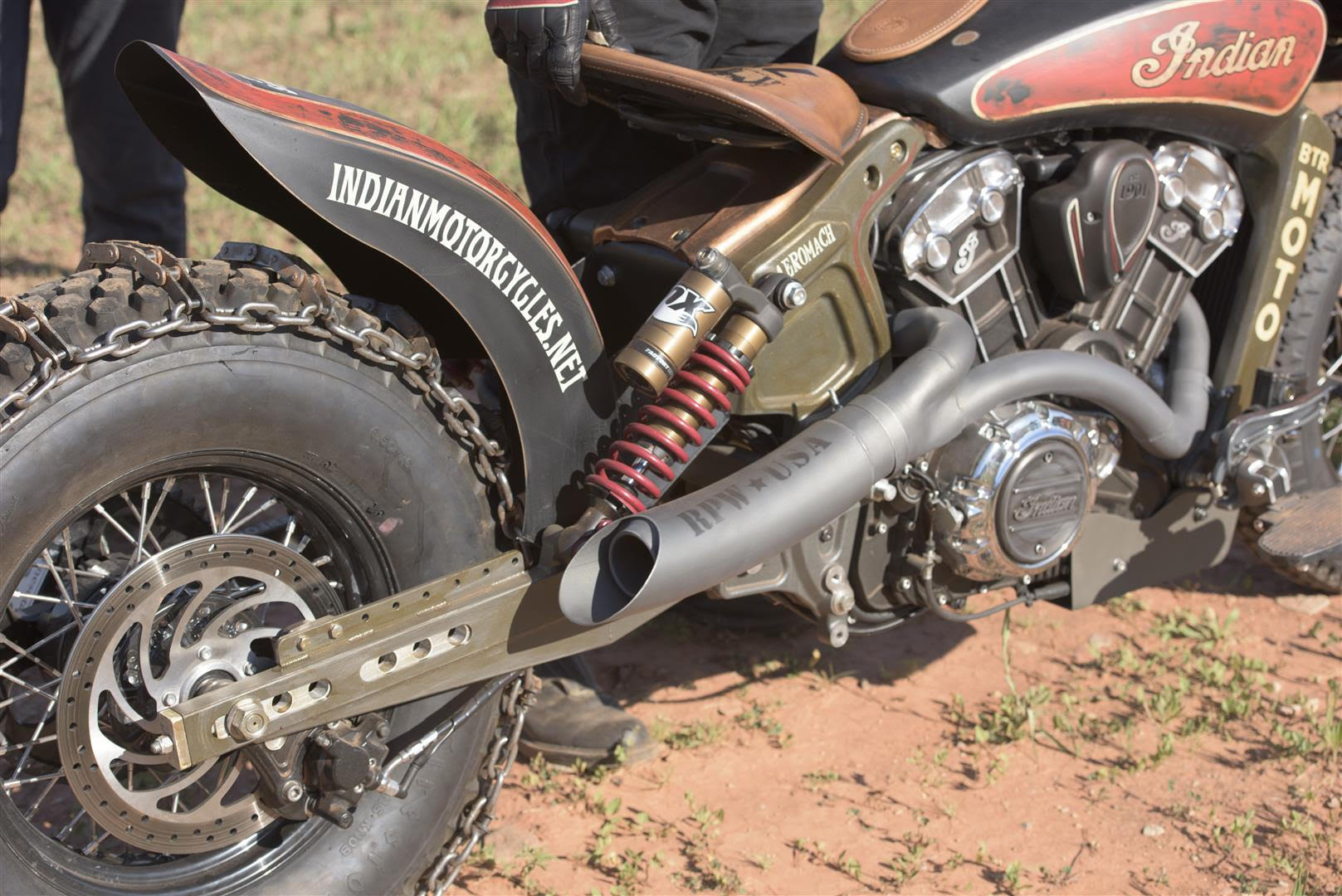 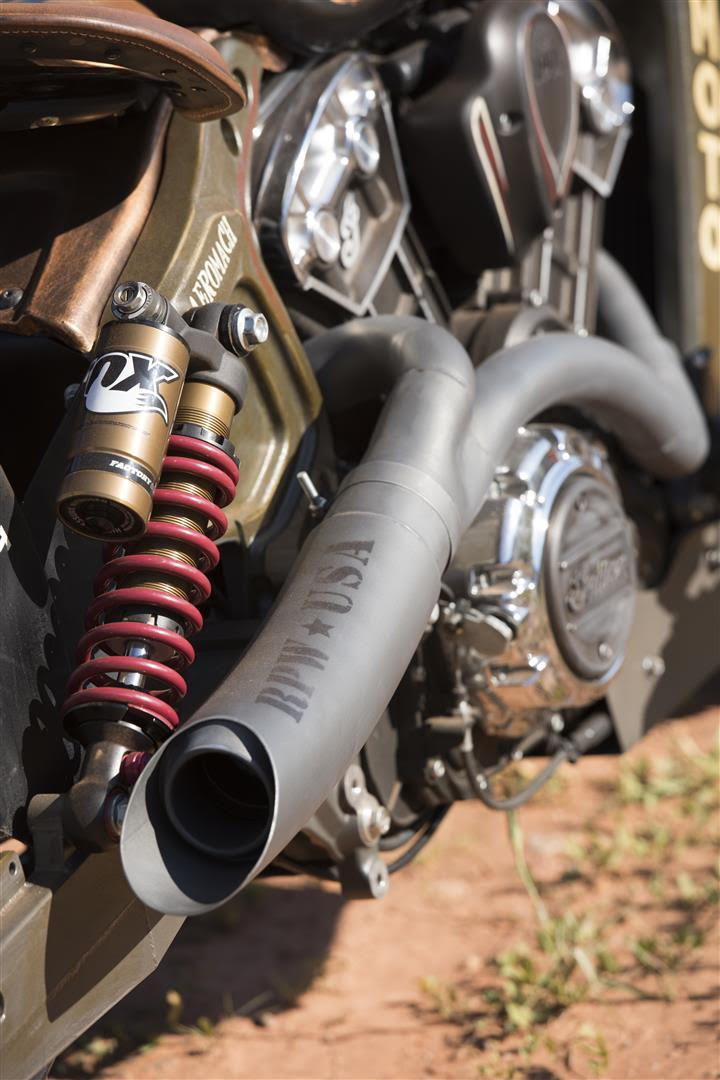 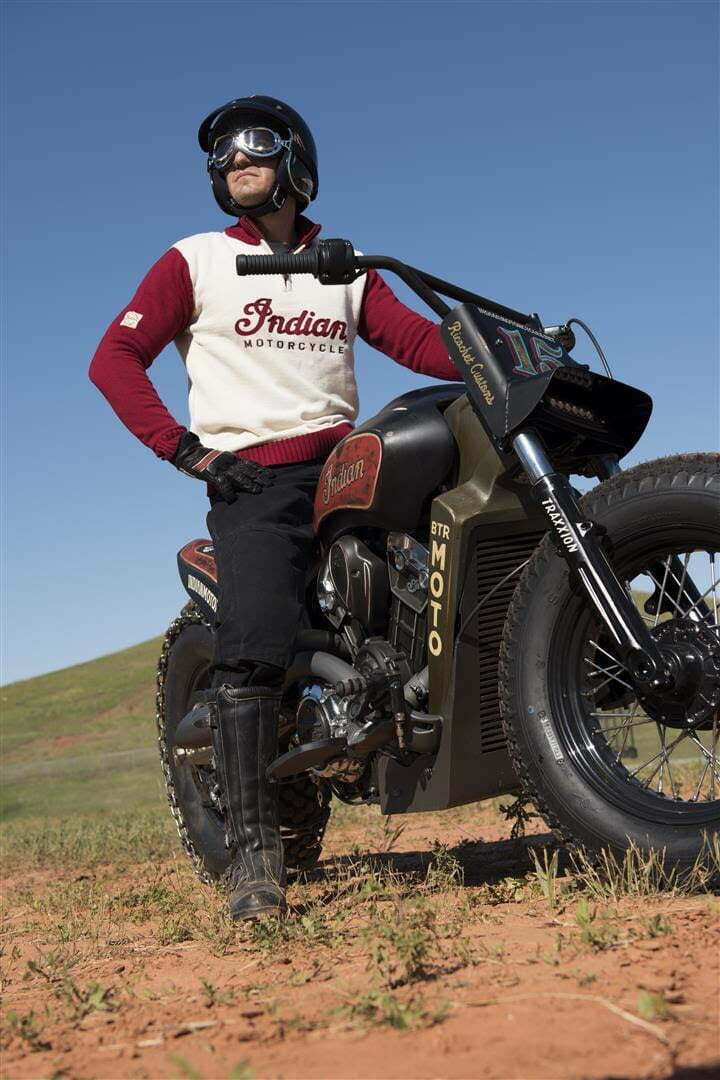 Indian Motorcycle revealed the “Black Hills Beast,” built by Doug Siddens and Nick Jaquez of IndianMotorcycles.net in Sturgis to a strong reception. The Black Hills Beast, based on a new 2015 Indian Scout, was customized to emulate the purpose built nature of historic hill climb motorcycles.

Transforming the look of the Scout started relatively easily with the addition of several new Indian Motorcycle accessories including the 1920 Solo Saddle Seat (MSRP $379.99) and a set of the accessory laced wheels ($499.99 each). Custom details that set the bike apart include an elongated custom swingarm, custom handlebar, custom radiator shroud and front number plate with an LED headlight. The 100+ horsepower of muscle in the Scout powerplant chewed up the earth via a custom tire chain designed for maximum grip when charging up a hill.

“Building a hill climber seemed easy enough, but it posed some unique challenges,” Says Doug Siddens of IndianMotorcycles.net. “Enthusiasts know what a hill climber looks like – so some of the mods were logical – but scaling them to fit the new Scout was the key and took a lot of work and planning. We are very proud of the result and the reception that the bike got at such an important Sturgis milestone, the 75th anniversary. “

“We put the bike into our custom photo booth for the Sturgis Motorcycle Rally,” Says Indian Motorcycle Marketing Director Scott Meek. “Loads of attendees climbed up and took photos on the bike. It was cool to see such a positive reaction and enable so many riders to experience a key piece of Indian Motorcycle’s performance heritage.”

“We settled in on a design quickly,” adds Nick Jaquez of IndianMotorcycles.net “But none of it would have worked without the assistance of our suppliers and partners in this build. We cranked on it for a month and tossed out a few bits along the way – I do feel like we delivered one hell of a machine – and it was a blast getting it dirty too!”

Indian Motorcycle will continue to play with this gritty work of art through upcoming celebrations of custom Scout motorcycles, including the International Motorcycle Shows tour as part of the Scout Custom Series launched last year with the Wall of Death Scout, and now including the USO Scout and the Black Bullet Scout inspired by land speed racing.

The Scout Custom Series can be viewed here: www.indianmotorcycle.com/en-us/custom-scout

For a new video featuring the Black Hills Beast, log on to www.IndianMotorcycle.com

A story on the build by IndianMotorcycle.net can be viewed here: www.indianmotorcycles.net/threads/black-hills-beast-storms-the-75th-annual-sturgis-rally

As we rapidly approach the 4th annual Hot Bike Tour and Invitational Bike Build-Off, many people wonder what John Shope […]

The annual One Motorcycle Show kicked off this past weekend in Portland, Oregon. Despite dreary skies, the turnout for the […]

VP Gearing Up With New Products for 2012