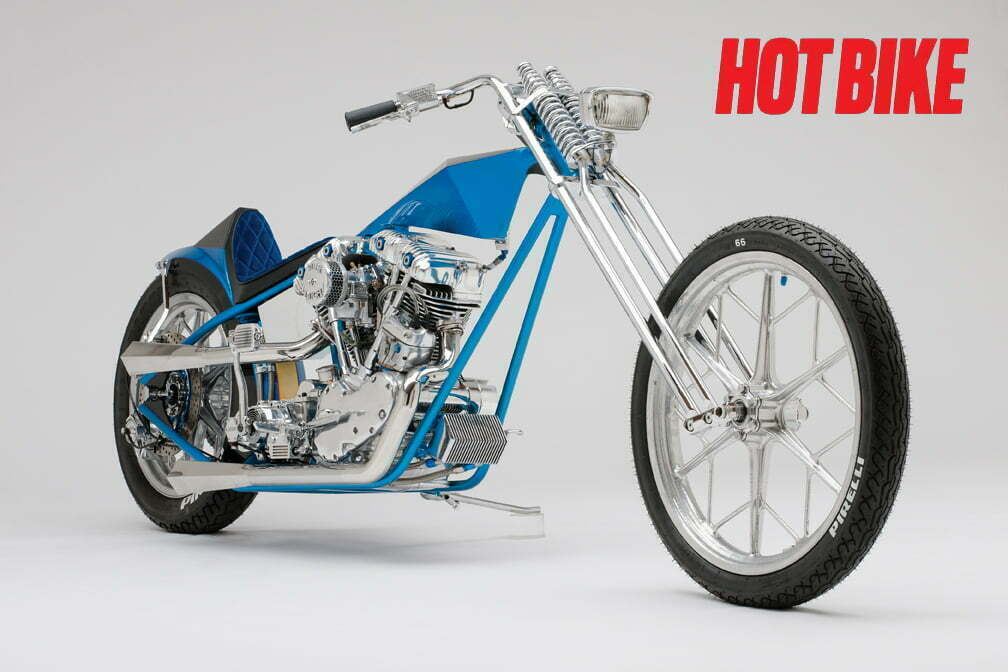 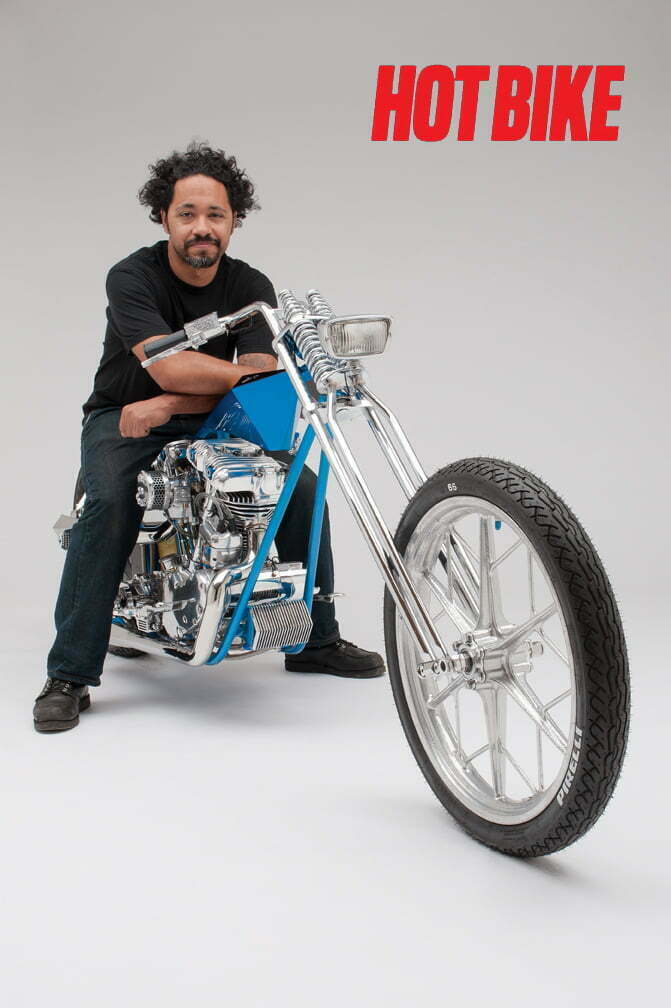 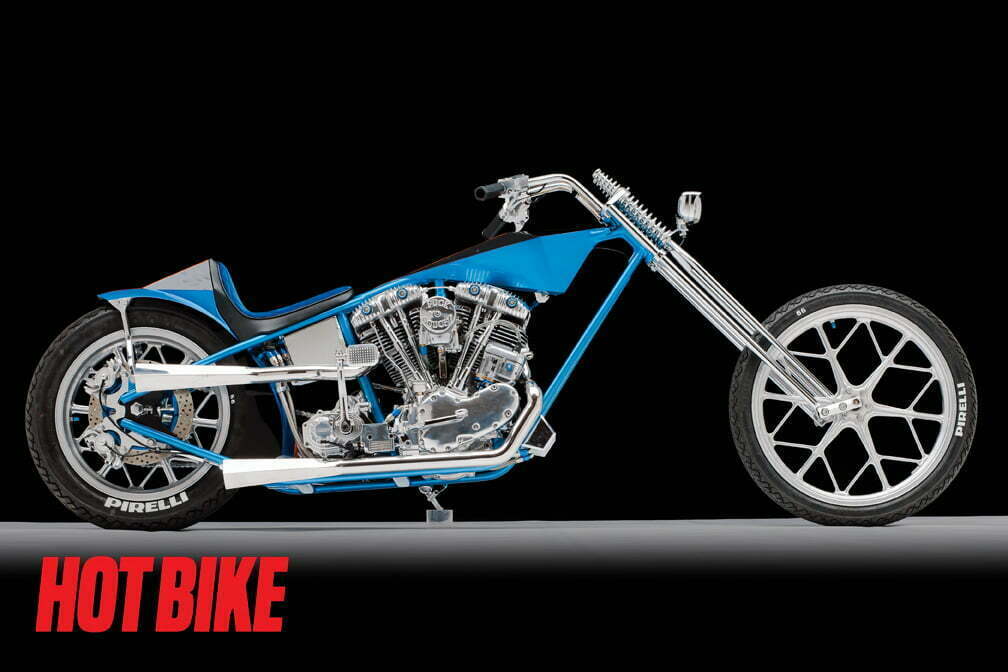 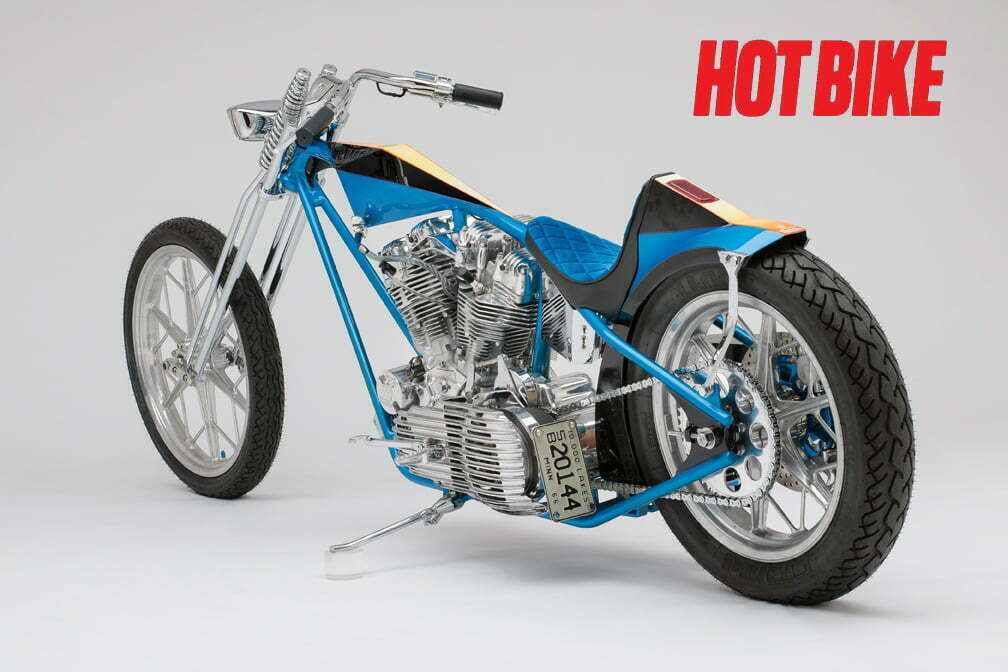 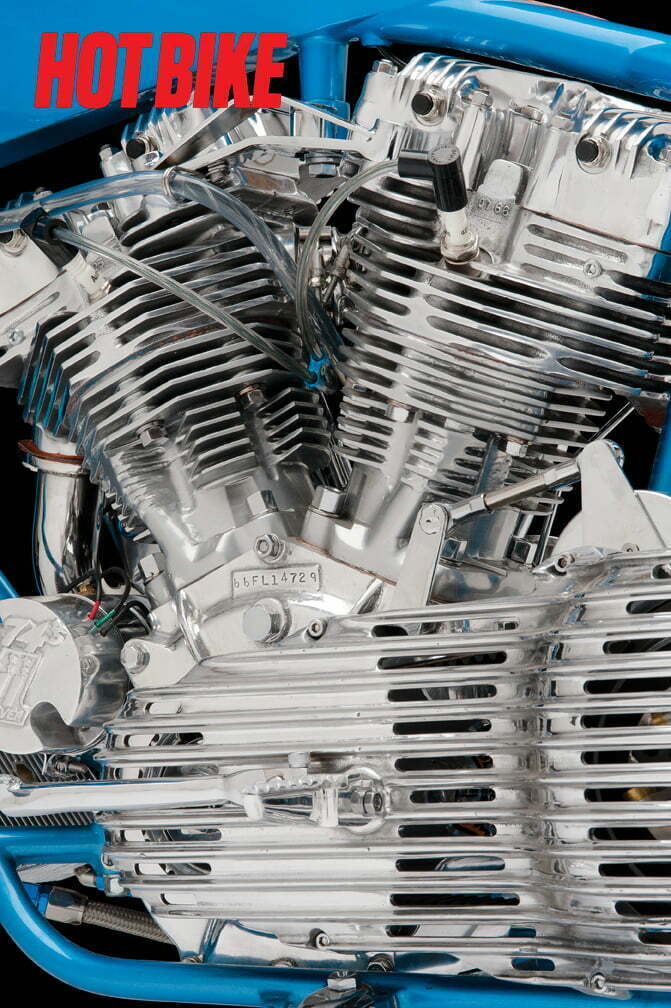 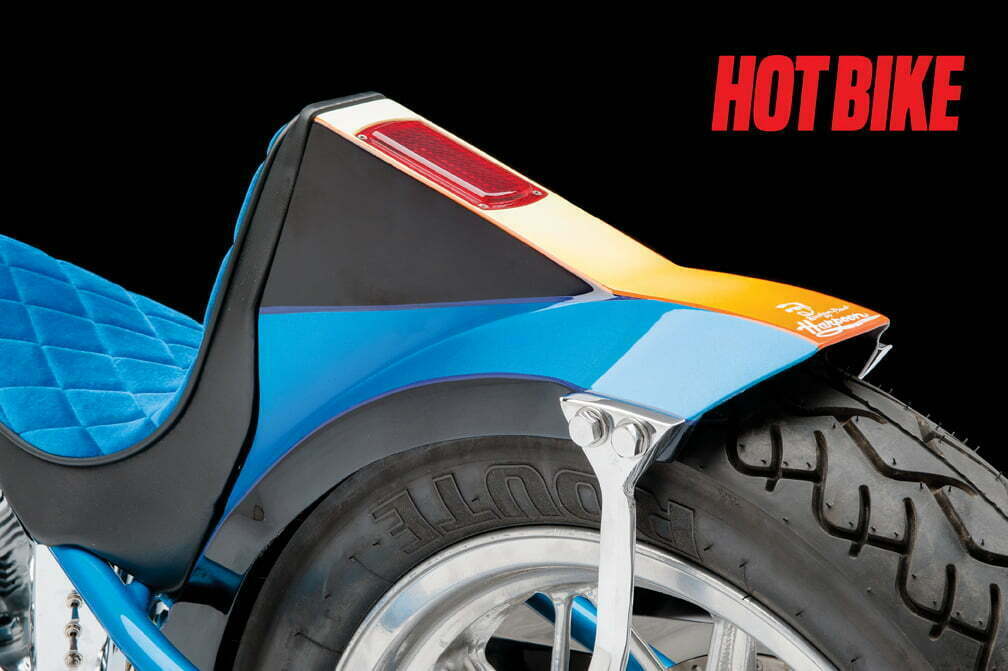 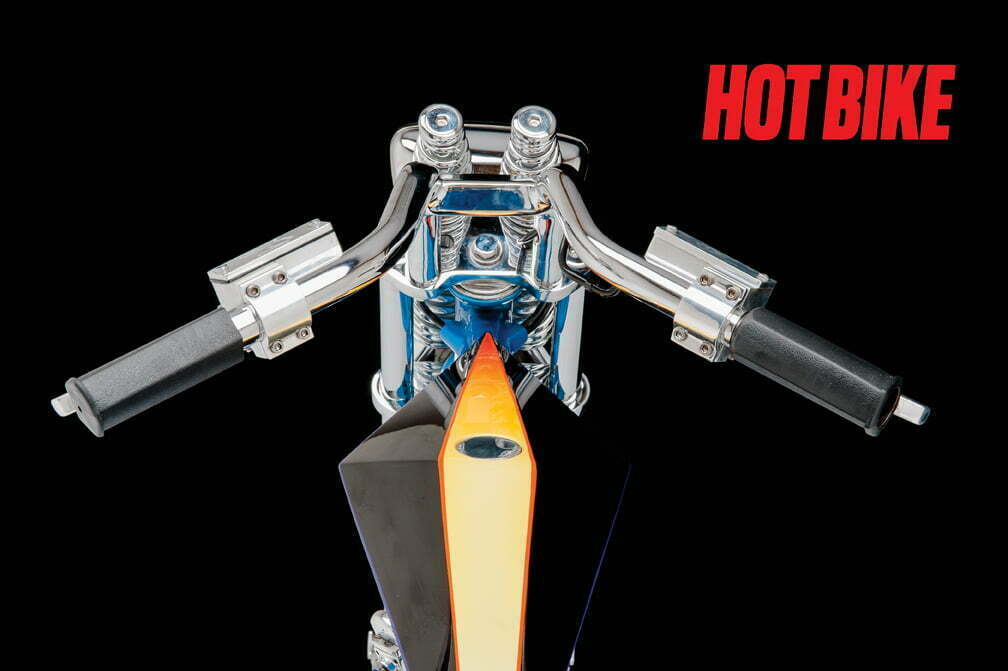 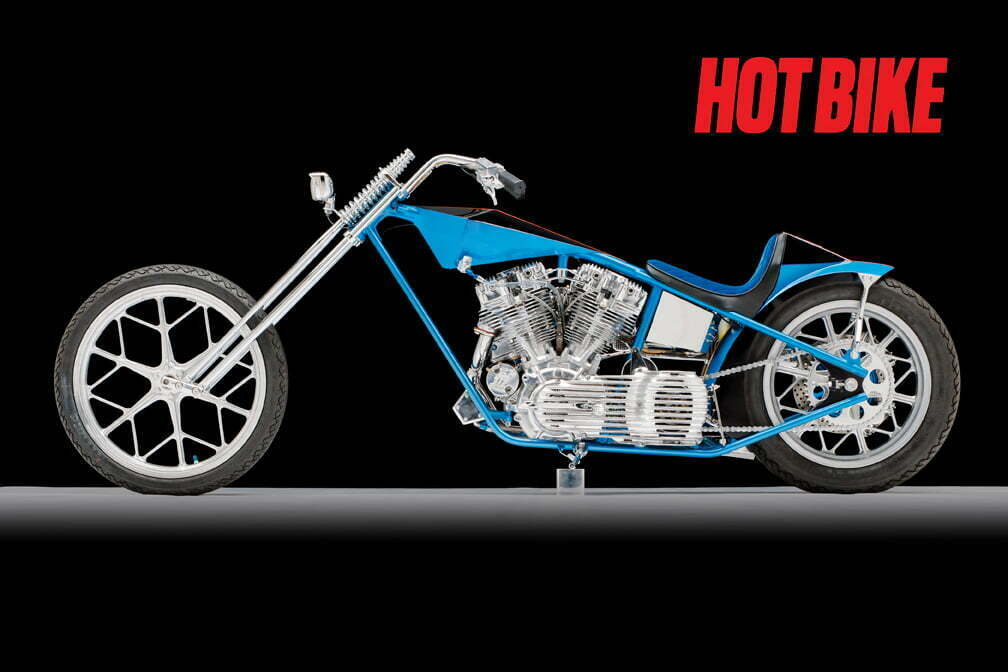 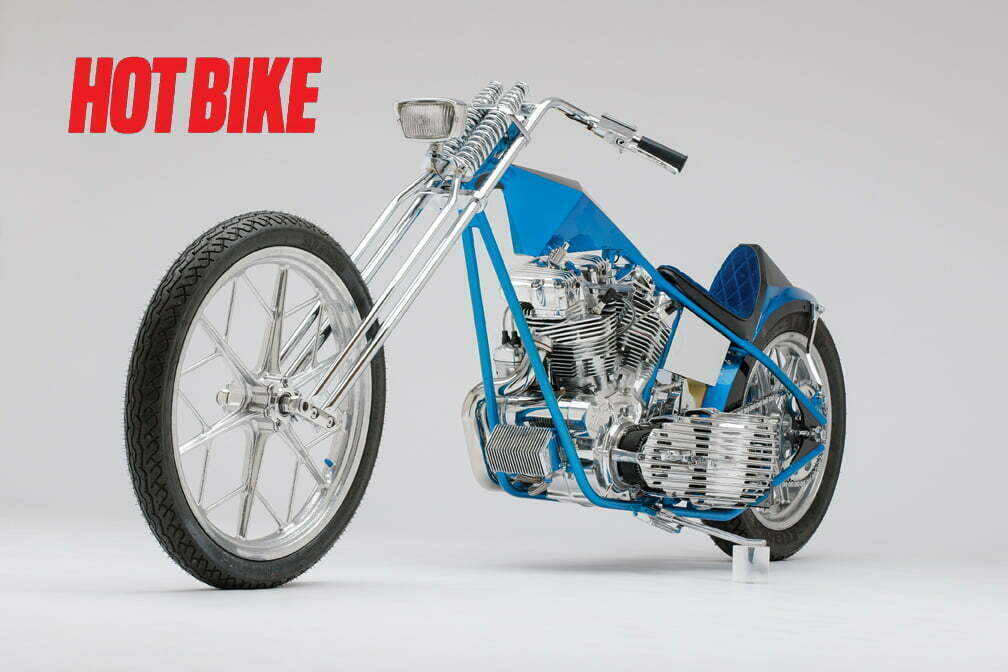 Diggers are a polarizing style of bike. You either love or hate them, and I happen to love them. I had a picture in my head of a classic Ness-style digger in full-show style. The story of this bike is best told through the parts I used and the help I got along the way. Start with the frame—I originally was going to build my own frame out of 7/8-inch chrome-moly tube. I had Mike at 47 Industries in New Jersey bend up all of the rear tubing sections I would need, and I had a rough frame design mocked up when I came across an original big twin Arlen Ness digger frame and matching Ness springer. They already had perfect dimensions and were exactly what I was going to build anyway, so I bought the frame and fork. The Ness frame has about 6 inches of backbone stretch, no up stretch, and is raked about 40 degrees. The fork is 6 inches over stock length.

The wheels are magnesium Kimtab wheels, originally used on Rokon trailbikes. The rear is an 18-inch wheel, and the front is the rare 21-inch Kimtab (the 21-inch version was only made for half a year in 1973, so they are very hard to find). The brakes are vintage Performance Machine cast calipers—one is actuated by the foot master cylinder, and the other by the hand master cylinder. I now had a rolling chassis to build the rest of the bike from. The motor is a 1966 Shovelhead that I had fully polished. This motor sports S&S 4.5-inch stroker flywheels, an Andrews B-grind camshaft, Morris magneto, and an S&S E-carb. Chopper Dave of Chopper Dave’s Casting Company made the custom air cleaner for me. The rocker boxes are made by Throwback MC Parts. It makes very high-quality parts, and these heavily finned rocker boxes are no exception. My good friend Pretty Ricky Brandt machined the cylinders, heads, and rocker boxes into a tapered hex shape to match the angular lines of the rest of the bike. I got the idea from an old bike built by Donnie Smith. The primary drive is a Primo belt drive and clutch, which is covered by a highly cut-up and modified original MPD finned primary cover. Pretty Ricky completed much of the machining to the inner and outer primary. I narrowed the inner primary almost an inch to get the lines of the bike nice and skinny. The transmission is a stock ratchet top with an old A.R.T. hydraulic kicker cover. The kicker pedal is another Throwback MC part.

The sheet metal was the biggest challenge on this bike. The gas tank is completely handmade and is welded onto the frame. The rear fender is also welded and molded to the frame and was made out of two different fenders I had in my stash. The fender also contains my oil tank, holding a little more than 2 quarts of oil—the filler is underneath the seat. The chrome box under the seat holds my small wiring harness and a tiny battery. I got a ton of help from my friend Chris Lampman on both the fender and gas tank. My friend Jordan from Union Speed came over, and I helped him make my seat pan, which he then covered in blue velvet. The stainless exhaust pipes were a massive job. Lampman and I did the pipes up to the hex sections, and then I turned to Pretty Ricky, who drew out a pattern to make the hexed exhaust tips, which my friend Andy Bebe used to bend some stainless sheet on his metal brake to make the tips. Using a steel buck I got from Pretty Ricky, I slowly hammered and dollied the small end of each exhaust tip until they were round enough to connect with the header pipes. Other things I made included the handlebars, foot controls, fender struts, electronics box, license plate mount, and a bunch of other stuff. After all of the pain building the bike, Bebe bodyworked the entire bike to make everything buttery smooth and sent it off to Harpoon for the paint, which turned out killer, like a bike you would see Crocket riding in Miami Vice.

The bike is so fun to ride. It handles great for being a long bike, and the motor is nice and powerful. With my tiny tank I only get about 20 or so miles between gas stops, but I built it as a showbike and not a distance hauler. It’s not babied, though, by any means. My favorite bikes are nice showbikes that get ridden until they look a little beat up, which is where this one is heading for sure. Thanks to Pretty Ricky, Lampman, Bebe, Jordan Dickinson, and Harpoon for all of the help getting this bike to the finish line.

PICKERINGTON, Ohio — The American Motorcyclist Association (AMA) is pleased to announce that the Aermacchi/Harley-Davidson Club has been selected as […]