Journey Into the Unknown – Stunts on custom Harley Davidson FXRs 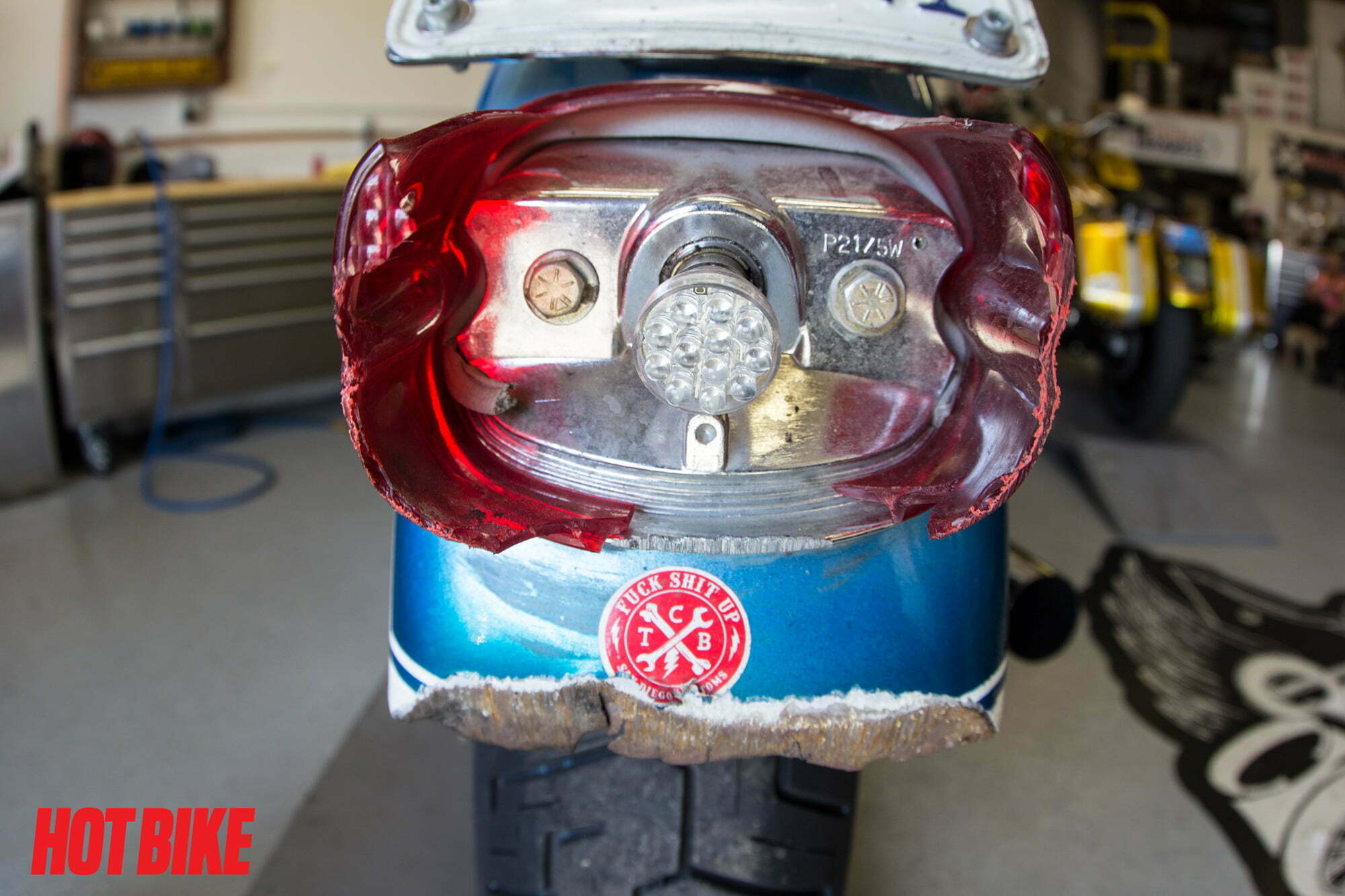 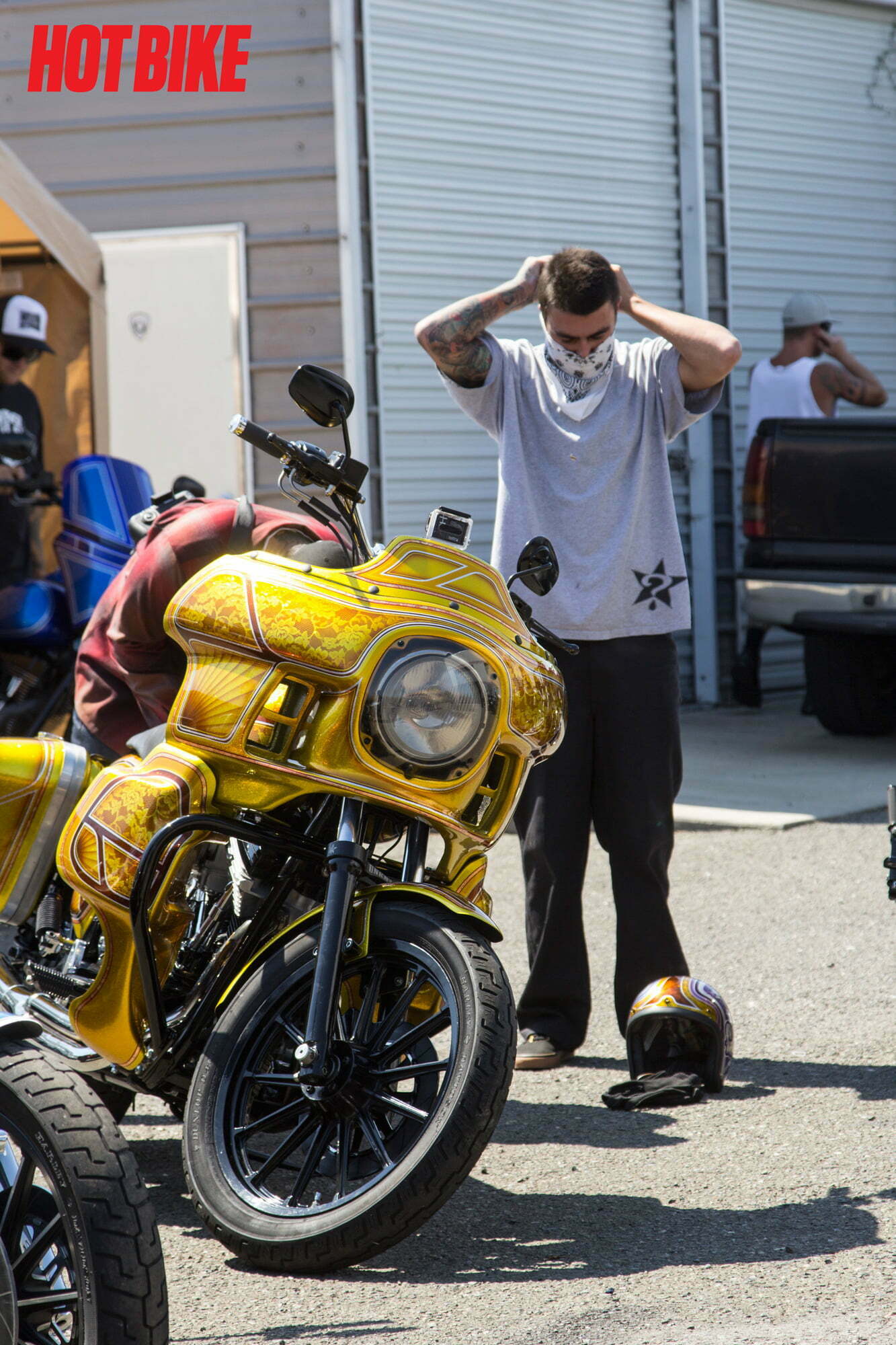 Twelve o’clock, on one wheel, hitting balance point, murdering the streets, stuntin’—all of these terms are used to describe the act of pulling a wheelie. The wheelie represents one of the most basic ways to give a single-finger salute to the world by controlling something that inherently looks out of control. The wheelie is and always will be the trademark of those who dare to be daredevils.

As bikes have become more and more powerful while weighing less and less, wheelies have become more commonplace in the motorcycle community. But the act of controlling a wheelie is a delicate skill that involves finding the exact point where the bike is accelerating and falling at the same rate, which is known as the balance point. Finding the balance is like trying to please a woman, as it constantly changes based on speed and rear brake input. Too much gas, you end on your ass; not enough gas, and the front end’s going to crash…down, that is.

To wheelie a 400-pound sportbike with 180 hp at the twist of the right wrist isn’t nearly as hard as rockin’ back a Dyna or FXR with half that power and weighing twice as much. So when a group of guys from the Bay Area started hittin’ the streets on their Evos and Twin Cams, new skills and control needed to be learned and perfected.

Unknown Industries was started in 2009 by a posse of like-minded hooligans beginning with Buddy Suttle and Nick Leonetti. “I’ve ridden motorcycles my whole life,” Buddy said. “It is my life.”

“I’ve ridden motorcycles my whole life. It is my life.”

Buddy began riding Harleys nine years ago and rides them because as a kid, many of the people he looked up to rode them. “Nick and I knew of each through racing and riding dirtbikes,” he said. “We wanted to ride for while, and one day I saw him and some friends riding, so I followed them to a practice spot we knew of.” In 2009, Buddy began putting his videos on YouTube under the title “Harley Wheelies”; to date, their channel views are more than 2.1 million, and in August of 2013 they released their first DVD, 13th Level. “We always wanted to do something bigger than what we were doing on our own with riding and with our videos,” Buddy said. “We haven’t changed what we are doing now; we’ve just had the opportunity to do it and distribute it at a higher level.”

Harleys are the baddest bikes,

and I wanted something that I could ride on the street,” Nick said about the reason he rides them. Soon after he began riding Harleys, he met Buddy. They grew up in the same town, rode the same bikes, and were doing the same stunts. “Buddy and I heard about each other and went for a ride; we each did a few wheelies and got pulled over by the cops. Luckily they knew Buddy, so they let us off without a ticket. We’ve been riding together ever since.”

The third member of the group is Kade Gates. Kade, unlike Nick and Buddy, was not from Petaluma, California. Kade grew up farther south in Ventura, California, where he became a fan of the Harley Wheelies video series. He put some of his own videos on YouTube of himself doing burnouts and wheelies and reached out to Nick and Buddy. In October 2012, the three finally met up at the Rip City Riders show in Petaluma. Kade recalled, “I was just one of the dudes doing it, and they were the ones who started it. I was stoked to meet them.” Kade has been riding BMX pretty much his entire life and got into building choppers and older motorcycles. He got his first Harley, a Sportster, at the age of 19. He had been waiting to get a newer-model bike so that he could push the limits and do crazier riding stunts on it. “I’m stoked to be a part of the Unknown family,” Kade said. “It’s like being a part of a team of pioneers of the sport

, if you can call it that, because right now there is no sport. It’s not sanctioned what we do, and being a part of the best of best at it is great.” Kade began officially riding as an Unknown member in April 2013 when he joined Nick on the JVC Mobile Plugged In Tour Road to Sturgis.

Like the previous riders who paved the path before them, the crew at Unknown Industries follows in the footsteps of a long line of daredevils. With each mile passed either in a cloud of spinning smoke or spinning freely while lofted up in the air, the team at Unknown Industries is carrying on the traditions of showmanship to a new generation of spectators. So raise your glass—and your wheels—to those who throw it up and back until the taillights break.

Proper intake and exhaust is very important. Words and Photos: John Zamora When I switched over from import bikes to […]

DEADWOOD, S.D. (8/3/11) – Mountain Mayhem is coming to Deadwood Mountain Grand during the week of the Sturgis Rally. Deadwood’s […]