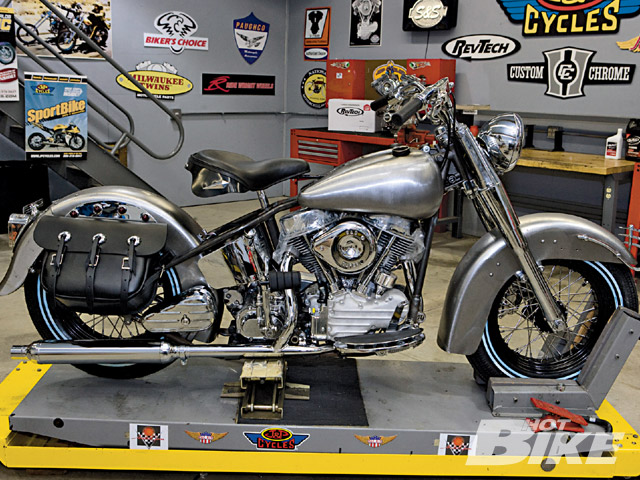 1. This sweet little replica ’50s Panhead could be yours! Just mark your calendar because by the time you read this the contest will be in full swing and results will be announced on New Years Eve! Tune in next month to see the wicked paint job and final build. 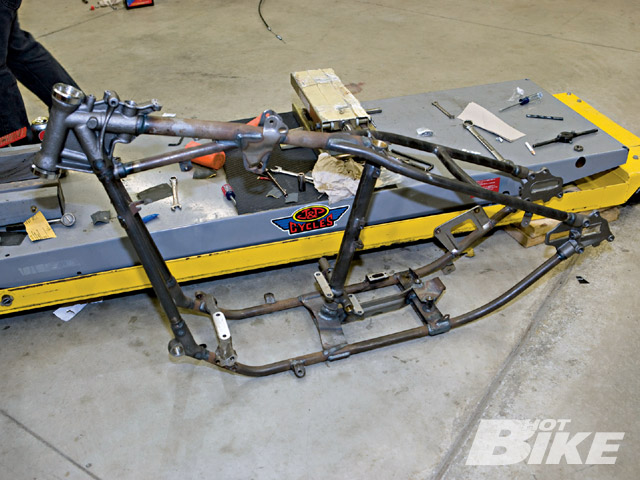 2. Kody got started by laying out the donated parts he’d received for the build. He started with the Tedd’s V-Twin replica ’50s Pan frame and laid it on the ground next to the lift. 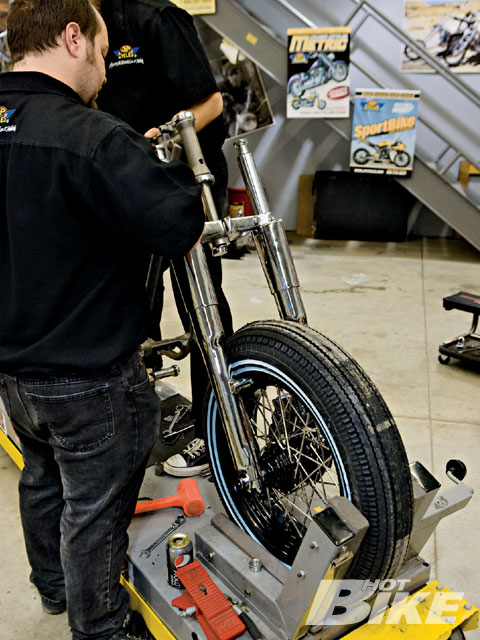 3. Kody and his helper, Tony Lueck, placed the somewhat mocked up frontend onto the frame neck. You can see the 16-inch Ride Wright front wheel with the Coker tire wrapped around it sitting in between the Biker’s Choice frontend. Nice fit! 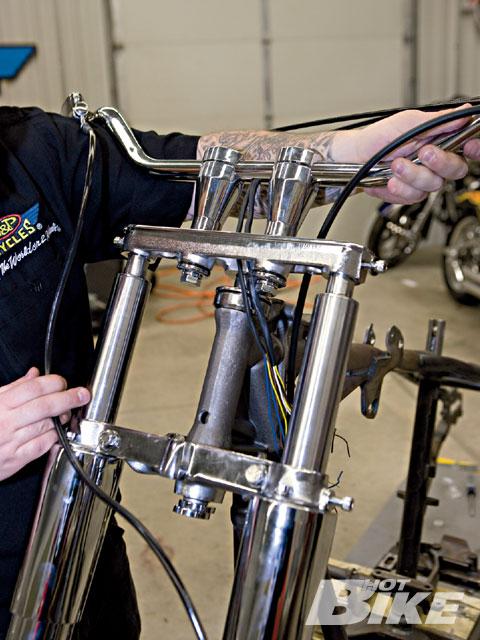 4. The top triple tree, risers and handlebar were mounted in place. Kody mounted the Performance Machine controls and Avon grips and internally wired the bar and attached it with the risers to the top tree. Then he bolted the entire assembly onto the frontend as one piece. 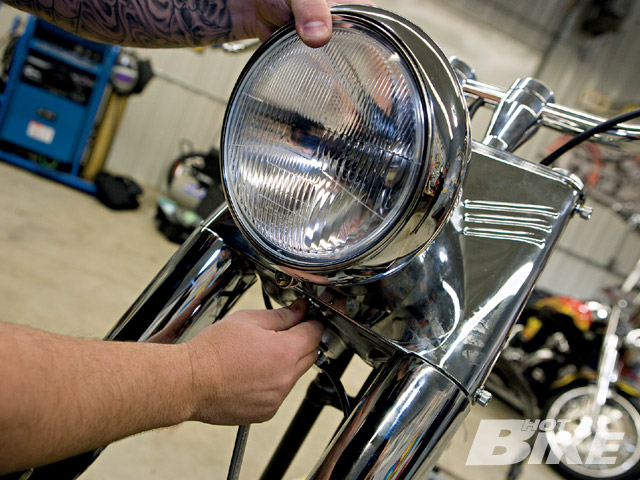 5. Then Kody installed the headlamp assembly, which is available from J&P; Cycles. 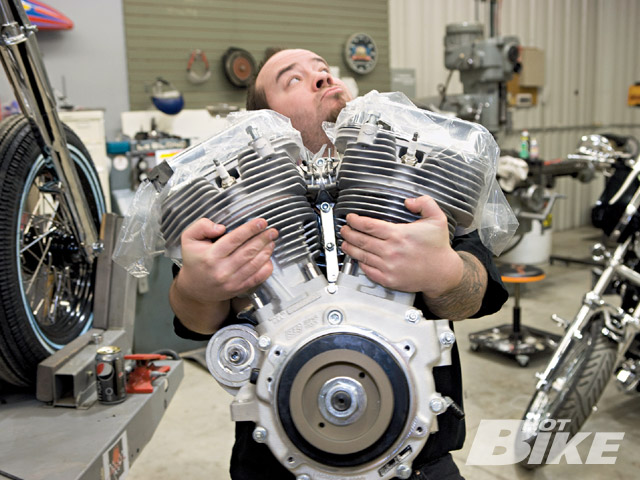 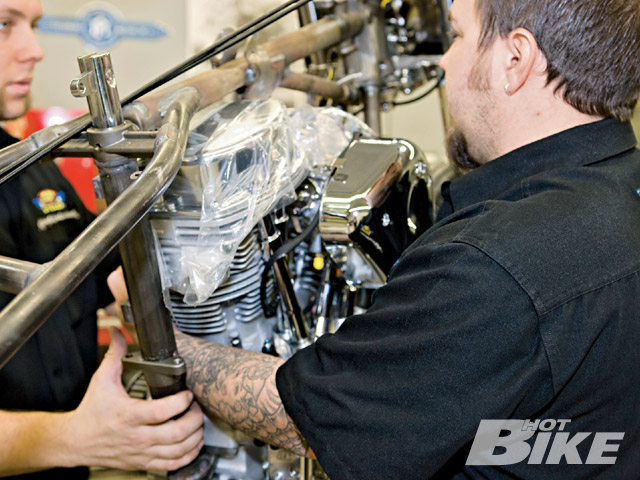 7. Once Kody wiped the sweat beads from his brow, he and Tony mounted the engine into the frame and bolted it up to the mounts. Fit like a glove… 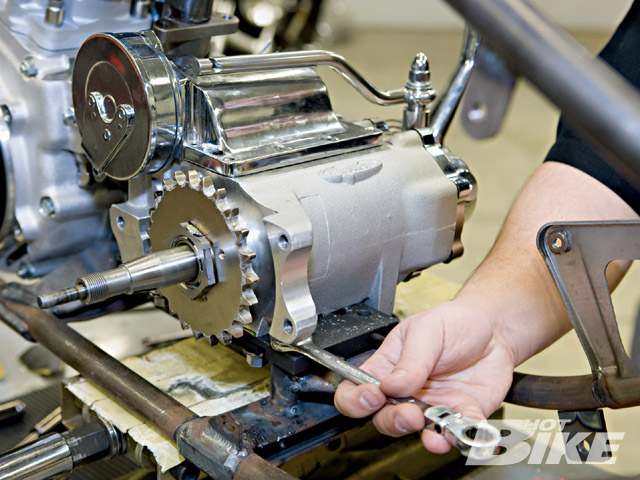 8. Then it was on to mounting the RevTech four-speed trans w/ kicker from Custom Chrome. Once it was bolted to the frame and engine, it was onto 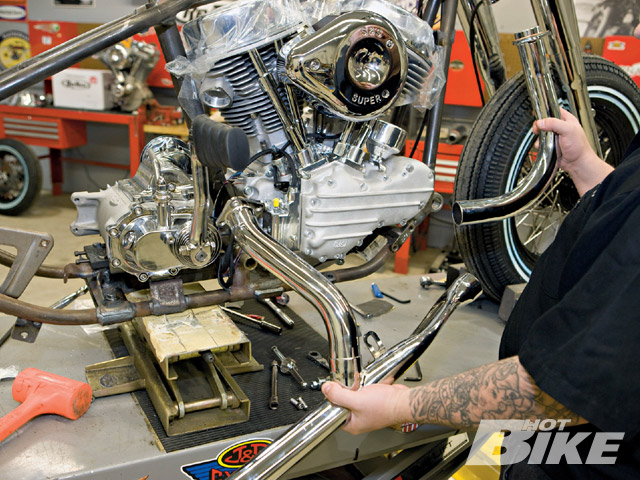 9. …loosely fitting the Paughco exhaust. Remember, all parts were only being bolted on at this time to ensure proper fit and for mock-up purposes, to see if any mods needed to be made.

10. Once Kody fit the Paughco pipes onto the heads, he got started with the Jammer primary components from Custom Chrome. First off, he installed the inner primary.

11. Then Kody bolted the RevTech starter to the back of the inner primary.

12. Once tightened, it was back to the primary where Kody installed the Primo belt drive and Primo Pro Clutch. After that the Jammer outer primary cover was bolted on..

13. These are some really trick floorboards that really make the new Pan reminiscent to the Pans from the past. Kody bolted the boards on after mounting the floorboard mounting kit.

14. Kody moved to the rear section of the bike and started bolting on the rear fender assembly from Biker’s Choice.

15. Once the fender was in place, Kody marked where the Tombstone taillamp would be installed. Then he drilled a hole for the taillamp wiring to be routed.

16. Sliding the Coker tire and Ride Wright wheel on the rear made that vintage feel come to life even more. It also let us know that we were one step closer to finishing the mock up.

17. The Biker’s Choice front fender was fitted with a vintage front fender bumper. You don’t see too many of those on the road anymore, but if you hurry up and make your donation/s today, you’ll be one step closer to seeing it on the road from behind the bars of your new bike.

18. Once the fender bumper was bolted on the front fender, the whole assembly was bolted between the Biker’s Choice front fork legs.

19. With the fender sitting snug on the frontend, Kody moved on to bolting the seat-mounting bracket on the backbone of the frame.

20. Then it was time to mount the Biker’s Choice gas tanks. They fit perfectly.

21. While Kody tightened down the tanks, Tony mounted the Pac-Kit replica Panhead leather saddlebags on each side of the rear fender.

22. Auto Gem donated some Gems and Baby Bullets for the project. Here Kody installed them onto the rear fender.

23. The mock-up was nearing completion. Kody and Tony were almost done and everything bolted up seamlessly. The Paughco head pipes were about to receive thier muffler.

24. Once that was done, the seat was the last thing to go on. It was bolted down and the bike had taken shape nicely.

25. Mock up was pretty much done! The vintage ’55 Pan tribute bike will now be stripped down and painted, powdercoated, etc., in order to get the finished look that J&P; Cycles wanted. Tune in next month for part two of the build where we wrap things up. Don’t forget tickets are now available for this bike, so get yours today!

Contests are fun, plus they’re usually for a good cause. I remember the fascination of winning a contest in middle school, thinking to myself, “Self, how freakin’ cool would it be if you won a contest?!” Especially when the grand prize was a brand new GT BMX bike. I had to have it. Of course, I didn’t win; some lucky kid did, and we all hated him from that point on. However, that kid walked taller than anyone else on the yard for the rest of the school year. Last year, Steve Duffy of San Francisco, California walked really tall after he made a $5 donation to the National Motorcycle Museum. He walked away with something better than a GT BMX Bike, a brand new Custom Panhead build by J&P; Cycles!

The National Motorcycle Museum, located in Anamosa, Iowa, is at it again with a J&P; Cycles’ modern-day version 1955 Panhead up for grabs. All you have to do to try and win this sweet little custom is make a $5 donation to get one entry or make a $25 donation to get six entries into the contest. You can make your contribution for tickets via US mail or by electronic check on the website www.nationalmcmuseum.org and all the proceeds go to the National Motorcycle Museum to continue its expansion in bringing enthusiasts the coolest of the cool in motorcycles and motorcycle paraphernalia. The winner of the bike will be decided on New Years Eve 2009! And you don’t need to be present to win.

J&P; Cycles, which celebrates its 30th Anniversary this year, had plenty of help with donated parts for the build, most of which can be found in the J&P; Cycles Parts and Accessories catalog and Vintage Restoration catalog. J&P; Cycles own bike builder Kody Wisner got to work with the donated components that included a P-Series 93ci engine from S&S; Cycle, a Panhead replica frame from Ted’s V-Twin, a Rev-Tech four-speed transmission, a starter, and alternator from Custom Chrome, a Primo belt drive and Rivera pro clutch, a set of Paughco exhaust pipes, Jammer primary parts, Performance Machine hand controls and brakes, Pac-Kit replica Panhead leather saddlebags, Wire Plus wiring components, Auto Gem gem lights and baby bullets, Coker tires, Bikers Choice frontend and sheetmetal, and anything else that was needed from the J&P; Cycles mega-warehouse. These items and more were generously donated for this year’s motorcycle. In fact, this year’s support from various manufacturers has surpassed that of other years, according to Nicole Ridge of J&P; Cycles. With the collaborative efforts of J&P; Cycles and all of the aforementioned companies, the Museum is able to provide you with all of the coolest vintage motorcycles that you crave. With your donations, the Museum will continue to grow and expand its collection of motorcycle artifacts.

The Museum opened its doors in 2001. Since that day over 80,000 eager enthusiasts have made the trek to the rolling hills of Anamosa (just outside Cedar Rapids) for a look at some of the creations from 1903 to the present day. Today the Museum boasts over 225 motorcycles on display from around the world. It is nationally recognized as a not-for-profit corporation and is governed by a board of directors. Funding comes from a variety of sources, which includes admissions, gift shop sales, memberships, corporations, grants, donations, and raffles.

J&P; Cycles built this custom from the ground up and HOT BIKE was there snapping pics along the way. Take a behind-the-scenes look at how the mock-up went down. Next month we’ll take you through the wrap-up of the build with the paint and finishing touches. And in two months, look for a full feature of the 2009 National Motorcycle Museum Custom Panhead.

The oil tank is incorporated into the rear section of the frame, or what would be the swingarm if it […]