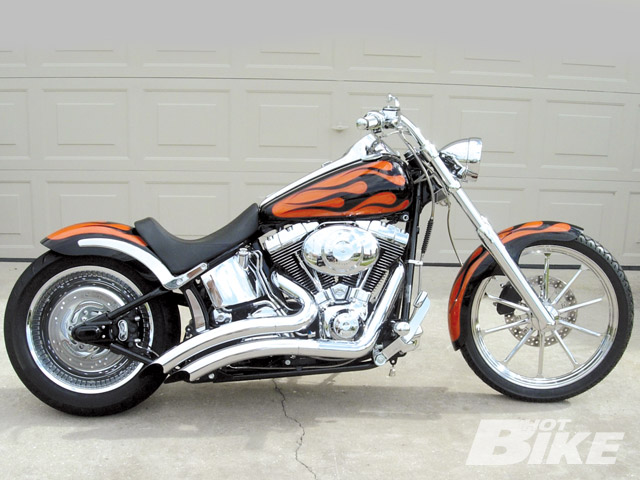 Attention Hot Bike Readers! We would like to start by asking you, the reader, to help us with your ride submissions. There is no shortage of Readers’ Rides coming across the editor’s desks; however, only about 1/4 of them can be used. The reason: bad photos, little or no info about the bike, and even worse, no contact info to get better photos or the needed bike specs. So before you put a stamp on that envelope or send out that e-mail, make sure that you have filled out the basics: Your name, phone number and/or e-mail, where you’re from. Then fill out a spec sheet–all you need to do is copy the info from the magazine: Motor, tran, frame, wheels, and so on. Last, a brief history about you and your bike. Now that you know exactly what we’re looking for, we can’t wait to see what you’re going to send in. Thanks!

John Comer wanted to share his dream with us. Many years and several motorcycles later he decided to add a second Harley to his motorcycle collection. With a lot of patience from his wife Janet, he built his dream bike. John was not in a rush to get it done until a phone call from his doctor had some bad news. It was at that point that he put all his time and effort into getting the bike done and seen in the pages of HOT BIKE.

We just want to say good job John, enjoy as much of the ride as you can.

Ride Till The End

Brian McFarland was looking for a way to spend some of his hard earned money on a toy, well what was left of his 401K anyway. What better way to do this than a Harley, which he felt would be a better investment. So when a used stock ’02 Deuce went up for sale at the local H-D he jumped at the bike. A little bit at a time, Brian has invested his time and money into this bike to get the look he was after. The good news is he was right about the investment, he has been offered more money for the bike then he has put into it.

Install the GPR top triple tree. GPR trees come in a raw and black-anodized finish. We powdercoated this one so […]