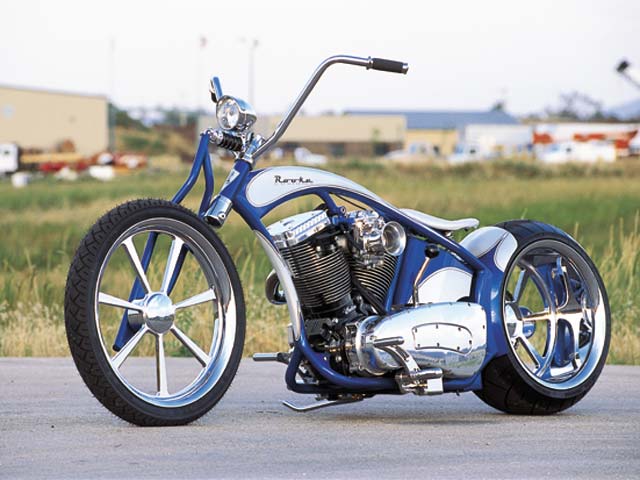 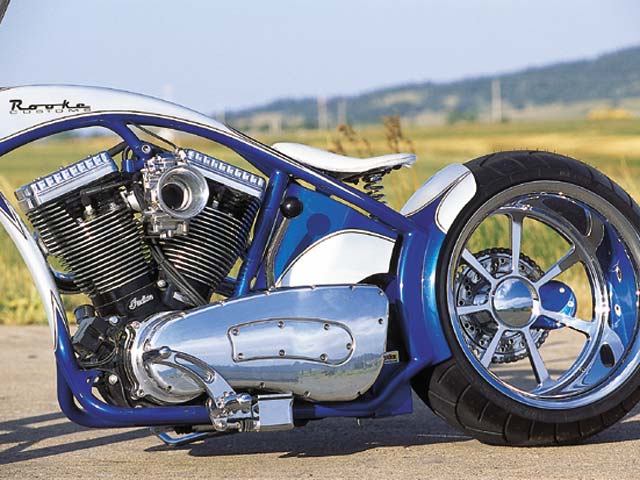 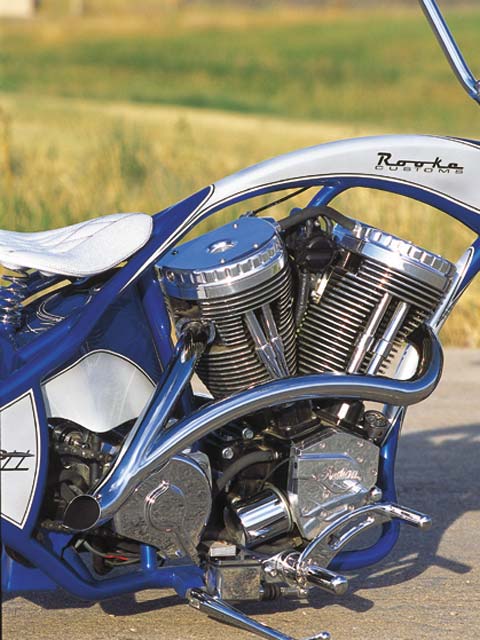 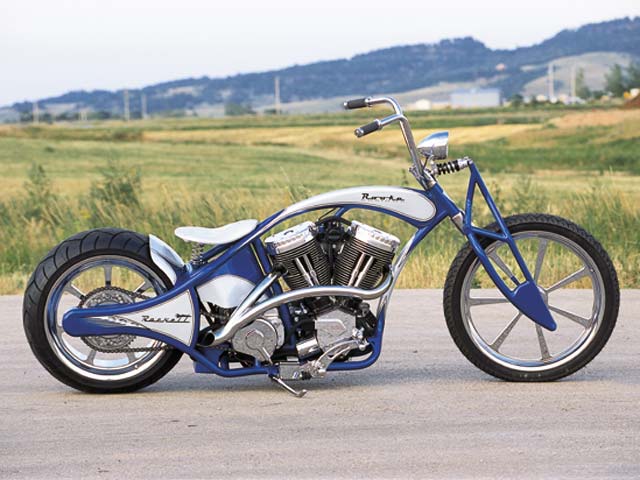 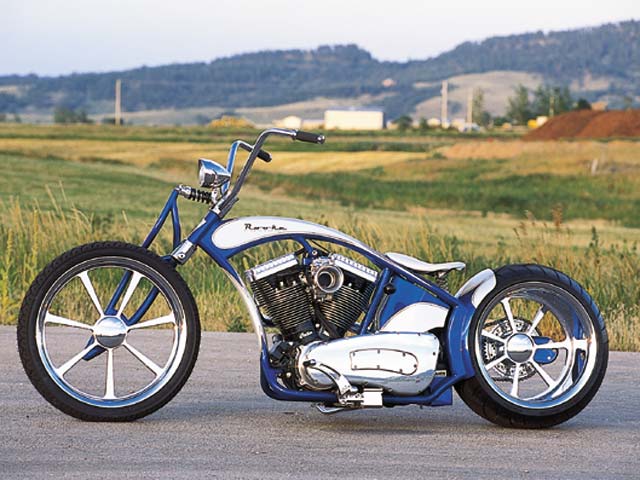 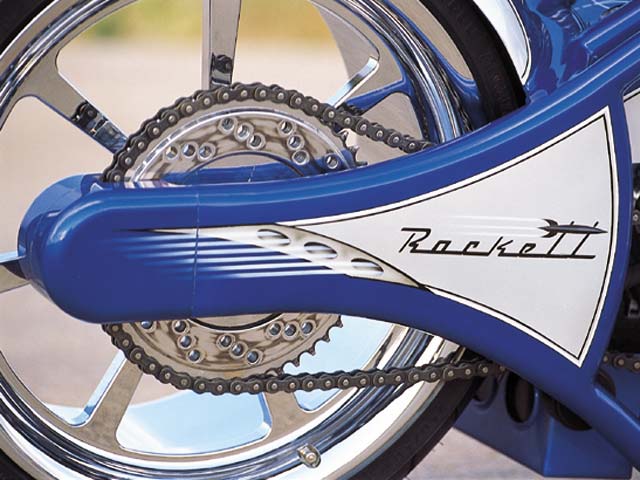 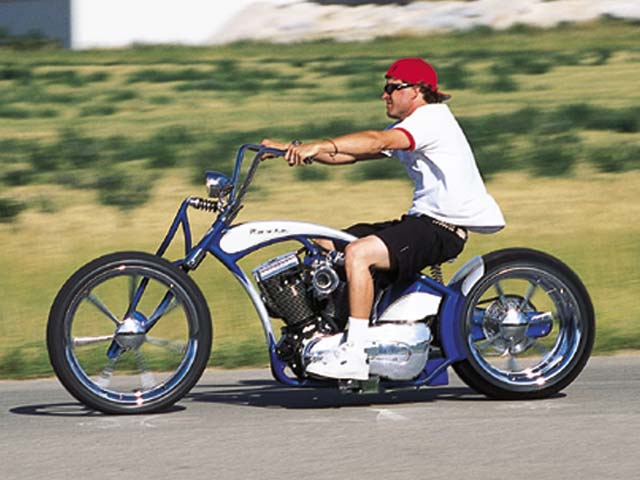 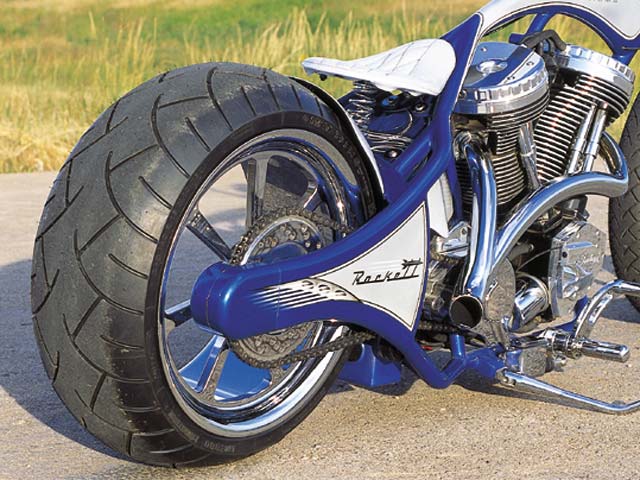 No it is not a bicycle — it’s another crazy custom motorcycle from Jesse Rooke. From his hometown in Phoenix, Jesse has come up with some off the wall bikes, starting out with the cover bike on the January ’03 issue of HOT BIKE. He has given his best effort to raise the bar for the custom bike world. So far, all of Jesse’s bikes force you to ask a lot of questions, such as, is it rideable, and, where is the gas tank? This bike is no different. Jesse told us this bike was made just to practice, so when and if the Discovery Channel calls, he will have no trouble putting one together for the show without looking like he doesn’t know what he’s doing.

Jesse set out to build something so unique, you really have to look closely to see every detail. It started with the frame. Jesse’s trademark style is a single-side rigid frame with 40 degrees of rake and 3 inches of stretch in the backbone. Jesse also had an oil bag incorporated into the rear section of the frame. It holds just over 2-1/2 quarts, and adds to the strength of the tubes. With space freed up for the oil bag, you will find the gas tank under the seat. To get the fuel to the carburetor, a small fuel pump was tucked under the seat area. The only suspension on the bike was part of a single-side Rooke Nana fork with an external gas shock and an adjustable damper for a smooth ride. Jesse made handlebars, which connected to the neck post, and welded them to the bearing cup cap, eliminating the use of triple-trees.

With this bike taking shape, Jesse had some wheels made called Rooke Sevens. He used a 21×2.75-inch wheel up front and an 18×9.5-incher out back, and both are covered in Metzeler rubber, with the rear being a 240. In keeping with the clean lines, Jesse made a rotor-sprocket combo and hidden caliper setup.

For the sheetmetal, Jesse welded on a Fat Katz fender to the rear section and trimmed it down to fit just under the seat. With no gas tank on the top of the frame, Jesse fabricated some sheetmetal to fill in the space between the downtube and the backbone, making it look like the nameplate of an old Schwinn bicycle.

With the chassis rolling around the shop and still looking like a bicycle, Jesse had to put some power to the bike. He placed a call to Indian and had one of its Powerplus 100 motors shipped out to his shop. From the minute he saw one in an Indian, he liked the look of its gloss black motor and round cylinders with polished fin tips. A 42mm Mikuni carburetor and some exhaust pipes from Wicked Bros. modified by Jesse were bolted onto this one-of-a-kind. To force all of the power to the rear wheel, a Baker six-speed right-side drive transmission and primary setup would do all the work. Jesse had some foot controls by Accutronix modified for the brake and clutch.

With the mock-up work done, Jesse stripped the bike down and sent everything out to Miguel’s Psycle Paint Shop for molding and paint. Miguel got busy molding the frame to look seamless. He covered the bike in House of Kolors’ Oriental Blue and Pearl White, then added some graphics to add to the bicycle style.

Assembly came quickly once the painted parts arrived back at the shop. Jesse wired up a CCI headlight and a Nasi taillight, then added a kickstand by HotMatch, some retro grips, and an internal throttle. The seat was a one-of-a-kind by Aaron Jenson.

The bike was finished in just over 30 days, in time for Sturgis. Keeping with the old-school-meets-new-school theme, Jesse’s new bike draws a lot of attention when it is out on the road. However, he says the style is like a theft deterrent — if they are scared to ride it, then they won’t try to steal it.

The overall stance of this Softail Deuce is sleeker than most others, even customized versions. Luca Manni My name is […]

Equipped with air bags, the unique SCPP seat design provides the rider with some rear suspension. J.R. created his own […]

A First for HOT BIKE

“There’s a major element missing in your book, dammit,” Buster said, pushing another Jack on the rocks under my nose. […]

Fashionable Sunglasses For Any Style