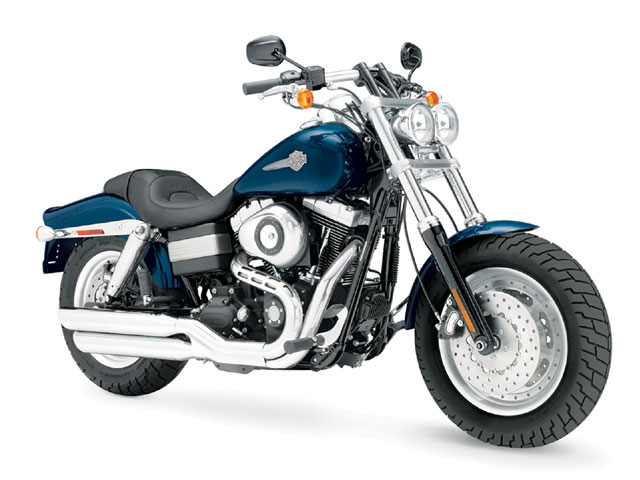 It’s that time: time to show off the new 2008 Harley-Davidson line-up. This year Harley-Davidson turns 105 years old, but what does that mean? Maybe 105 shares of stock for everyone, or maybe not; we will just have to wait and see. It all started with a few of the HOT BIKE staffers jumping a plane from Los Angeles to Baltimore. Why Baltimore? It’s about 100 miles from York, PN, where Harley-Davidson happens to have their Softail plant. With a few new Softail models to see and ride, this would be the best place to start the trip. As we got off the plane and hitched a ride to the hotel, we got a brief rundown on what to expect over the next few days.

The next day we got up, had a great breakfast, then received a presentation on the new line up and all the goodies for the ’08 bikes. Things like three new bikes-Softail Rocker, the Rocker C, and the Dyna Fat Bob, along with ABS brakes, and some new color schemes. Then we got to ride the new ’08 bikes up to the York Plant. Why the York Plant? Well, the newest and biggest thing to come out of Harley-Davidson was the new Softail, the FXCW Rocker, and FXCWC Rocker C. So why not ride a few up to the plant to get a tour and see where the Softails are all built? It was a really nice ride out on the back roads to get to the plant. Once we got there we were met by some nice H-D staff members, and the tours were broken off into a few small groups. This was cool, as it allowed us to ask a lot of questions and take the time we needed to see everything. It was nice to see all the details that go into building one of these bikes from the ground-up. The tour was a little shorter than we would have liked, but we had more riding to do, so we grabbed some lunch and headed back out for some riding.

We got started with the Rockers:

FXCW RockerThe 2008 FXCW Rocker and FXCWC Rocker C models are designed to appeal to different riders. They have the look of a hardtail chopper while delivering a comfortable ride with modern rear suspension.

It’s the Rockertail rear end that makes a Softail a Rocker. The Rockertail utilizes an all-new rear section with elliptical tubes and no visible fender supports. As on other Softail motorcycles, the Rockertail rear shock absorbers are hidden under the motorcycle. The rear fender is mounted to the swingarm above an 18×240 mm rear tire, and the fender’s surface is fully exposed behind a solo seat. The Rockertail design gives the look of a hardtail frame, but the fender and wheel move together as the rear suspension glides through 3.4 inches of travel. The seat height of the FXCW Rocker is 24.5 inches.

The Rocker also has a new bullet-shaped headlamp, bullet-style turn singles featuring LED lamps, and the new Stop/Turn/Taillights incorporating the stop and tail lamp functions with the rear turn indicators, eliminating the traditional tail lamp from the rear fender. A stretched, five-gallon fuel tank holds a low-profile console with a polished aluminum insert, integrated indicator lamps, and an angled, speed shop-style speedometer housing. A machined 3-D Bar and Shield medallion is mounted in a deboss on each side of the fuel tank.

The Rocker is powered by the counter-balanced Twin Cam 96B with ESPFI fuel injection mated to the six-speed Cruise Drive transmission, rigid-mounted in a frame that’s color-matched to the bodywork. The powertrain is finished in Silver powdercoat with Satin Stainless Metallic powdercoat accents on the covers. A low solo seat is mounted over a finned, cast-aluminum oil tank that recalls classic hot-rod bikes of the past. The Rocker is available in three solid colors: Vivid Black, Pacific Blue Pearl and Crimson Red Sunglo, and in Vivid Black Deluxe, which features pinstripe flames.

FXCW Rocker C
The Rocker C is aimed at the riders who need to have it all dipped in chrome. Almost every component that was powdercoated on the Rocker has been plated with chrome on the Rocker C, from the fork tubes to the headlamp to the V-Bar riser. On the Rocker C, the swingarm and the finned, cast-aluminum horseshoe oil tank are color-matched to the paint on the frame and bodywork. The Twin Cam 96B powertrain is finished in Black and Chrome. The tank and both fenders are treated to a flowing flamed pinstripe that contrasts with the base solid-color metallic paint and cloisonn tank medallions. Polished tapered five-spoke cast aluminum wheels are standard on the Rocker C. The Rocker C is available in three solid colors with pinstripe flames: Vivid Black Deluxe, Pacific Blue Pearl Deluxe, and Crimson Red Sunglo Deluxe.

New FXDF Dyna Fat Bob
If bigger is better, the Dyna line just got a whole lot better with the introduction of the new Fat Bob. A new presence to the Dyna family, FXDF Dyna Fat Bob takes Factory-custom styling in a bold new direction. The name Fat Bob comes from the fact that the bike sports a 5.1 gallon fat bob gas tank. The dual headlamps mounted between polished triple-clamps are a signature Fat Bob element. It also features chunky new aggressive tread patterns on the 130 mm front and 180 mm rear tires that are mounted on 16-inch Slotted Cast Aluminum wheels. Black fork lowers and handlebar risers, a new seat shape, and drag bars put the rider in a better position. The Fat Bob can be ordered with a choice of mid-mount or forward foot controls. For sound, the chrome Tommy Gun 2-1-2 exhaust with slotted exhaust shield that snakes around the side of the black-and-polished Twin Cam 96 engine.

Touring Models
Aside from the new Rockers, Softails, and the Dyna, the other big changes to the H-D line-up are on the touring models. High-performance Brembo brakes and a Factory-installed ABS option are available on all ’08 Touring models. The new Harley-Davidson Brembo brakes offer consistent braking and stopping power under all operating conditions. The ABS feature is designed to help the rider maintain control during emergency stopping situations, especially those that happen in less-than-ideal conditions (wet or sand). The components of the Harley-Davidson ABS have been designed and packaged to be hidden, preserving the uncluttered styling of the area around the wheels. This is done by integrating it into the wheel spacer. Harley-Davidson ABS is a manual, independent system, meaning the rider maintains control of how much of each brake is applied. The Electronic Throttle Control (drive by wire) replaces mechanical cables on all Touring models. All wiring from the throttle-grip sensor is routed through the handlebar. The ETC enables the easy upgrade to a new cruise control system, and provides a clean custom look in the handlebar area. Factory-Option Cruise Control is now available for all models that do not come equipped with cruise control as standard equipment. Then there is the Isolated Drive System located in the rear sprocket, which improves ride quality under acceleration, shifting, and cruising, while reducing noise and vibration to the rider. For the guy that wants less time at the pump and more time on the road, the fuel capacity of all Touring models has increased by 20 percent, from five to six gallons. Combined with the six-speed Cruise Drive transmission, the larger tank gives the touring models more range than ever before. The new tank also features new console styling with a new fuel range indicator, which enables the seat to be reshaped for more comfort.

The Sporster Line up
Over more than a half-century, the Sportster has evolved technologically while sticking to its roots, offering riders a V-Twin performance and nimble handling in a motorcycle that’s always a cool, fun ride. The 1957 Sportster brought raw-boned aggression from the flat track to the street with an irresistible combination of power and agility. All Sportster models are powered by the Electronic Sequential Port Fuel Injection (ESPFI) XL Evolution V-Twin power train, rubber-mounted in the frame to reduce vibration and tuned to deliver a broad powerband for outstanding street performance. The transmission and engine share a common die-cast case. Final drive is via a clean, quiet, and durable belt reinforced with carbon fiber. New tank graphics are featured on the XL 883, XL 883 Low, XL 883C Custom, XL 1200R Roadster, and XL 1200C Custom.

VRSCAW V-Rod
We were happy to see that for the first time, each ’08 VRSC model is available with optional Factory-installed Anti-Lock Braking System (ABS) designed to work in conjunction with the Brembo brakes on all VRSC models. The ’08 VRSC models also have a new clutch with race-bred “slipper” action that helps mitigate drive-train strain and rear-wheel lock-up during downshifting. The slipper clutch also helps avoid unnecessary ABS activation if the rear wheel locks during a high-speed downshift. Integral with the new clutch design is an assist feature that reduces clutch-lever effort by more than 20 percent. As far as the power goes, there is plenty with the 1250 cc Revolution V-Twin Engine. (Originally designed for the CVO Screamin’ Eagle V-Rod, bore has increased to 105 mm from 100 mm, boosting displacement from 1130 cc to 1250 cc). This engine is tuned to produce up to 125 hp at 8,250 rpm and up to 85 ft-lbs of torque at 7,000.

The 60-degree Revolution V-Twin engine is liquid-cooled and features Electronic Sequential Port Fuel Injection (ESPFI), dual overhead cams, four-valve heads, and a five-speed transmission. The engine is rubber-mounted in a hydro-formed steel perimeter frame. A steel shell covers the large-volume airbox. A five-gallon fuel tank is located below the seat on all VRSC models.

We’re checking in with our friends at Dreamgiveaway.com to learn more about their latest giveaway, a 2022 Indian Motorcycle FTR […]

Mustang Breaks Out Seats For The FXSB Softail Breakout At Laconia

Mustang is breaking out comfort for the 2013-14 Harley-Davidson FXSB Softail. Fans of Harley’s CVO Breakout are getting the first […]

Rotating Mufflers for Your Bagger