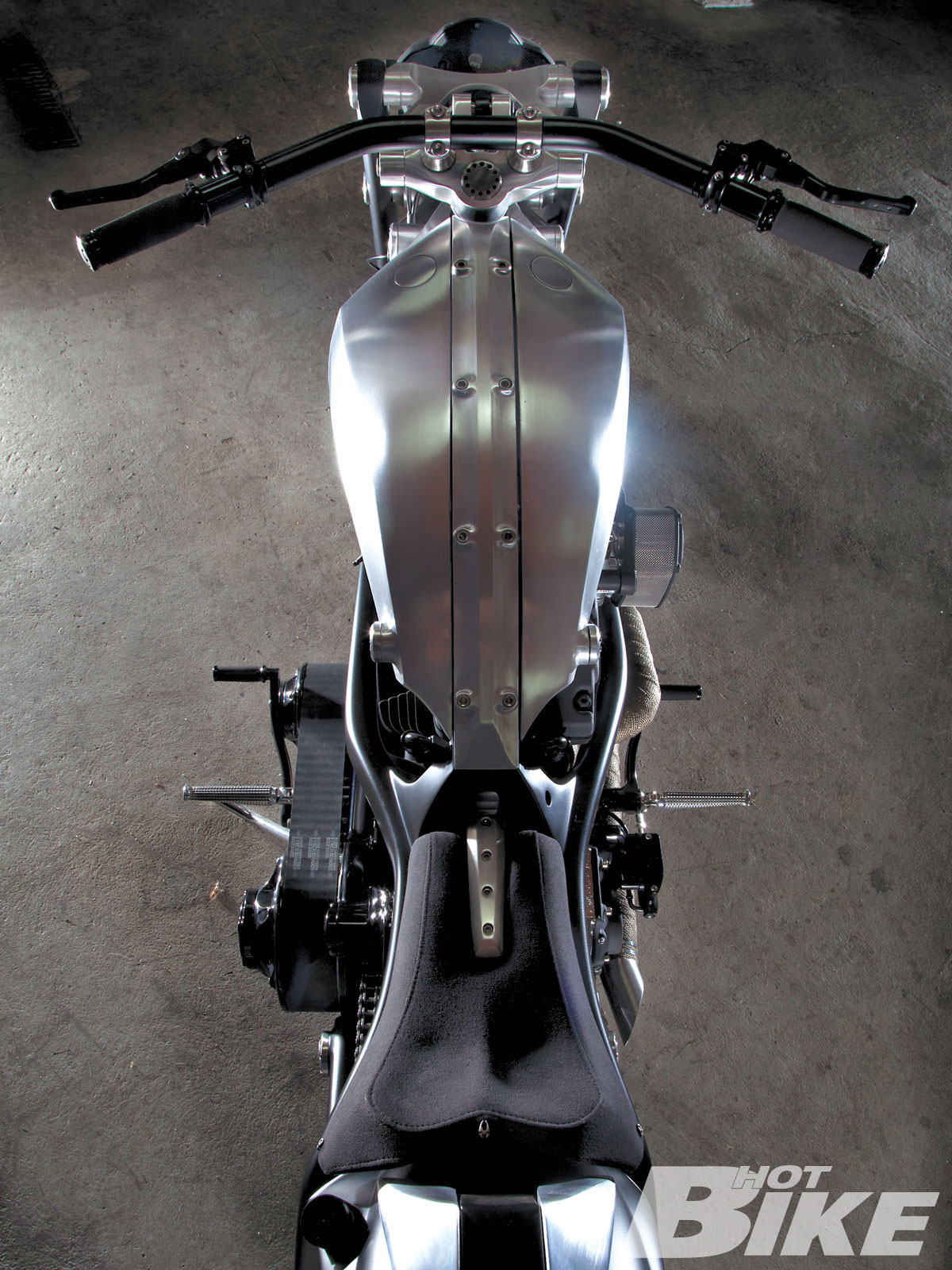 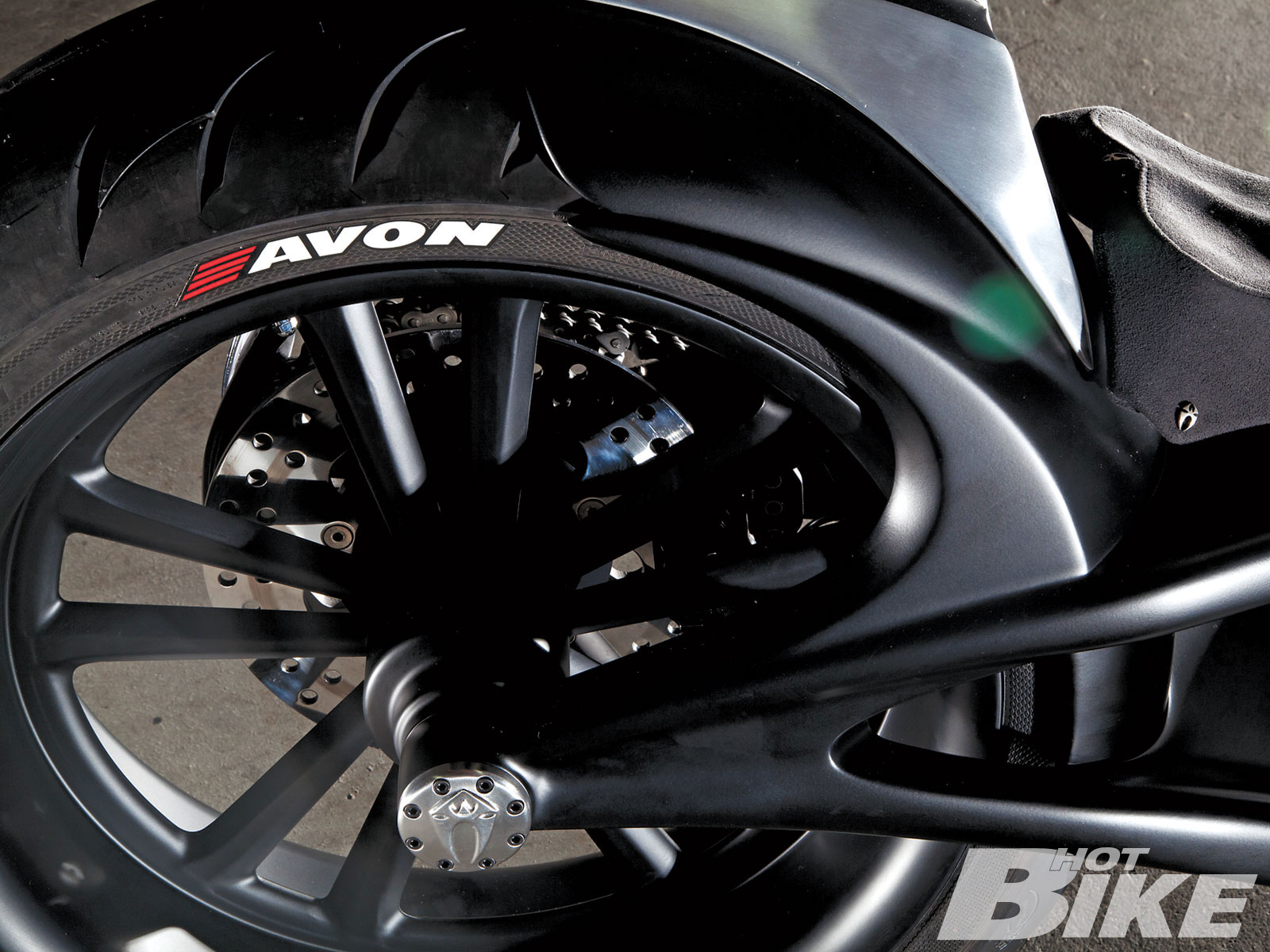 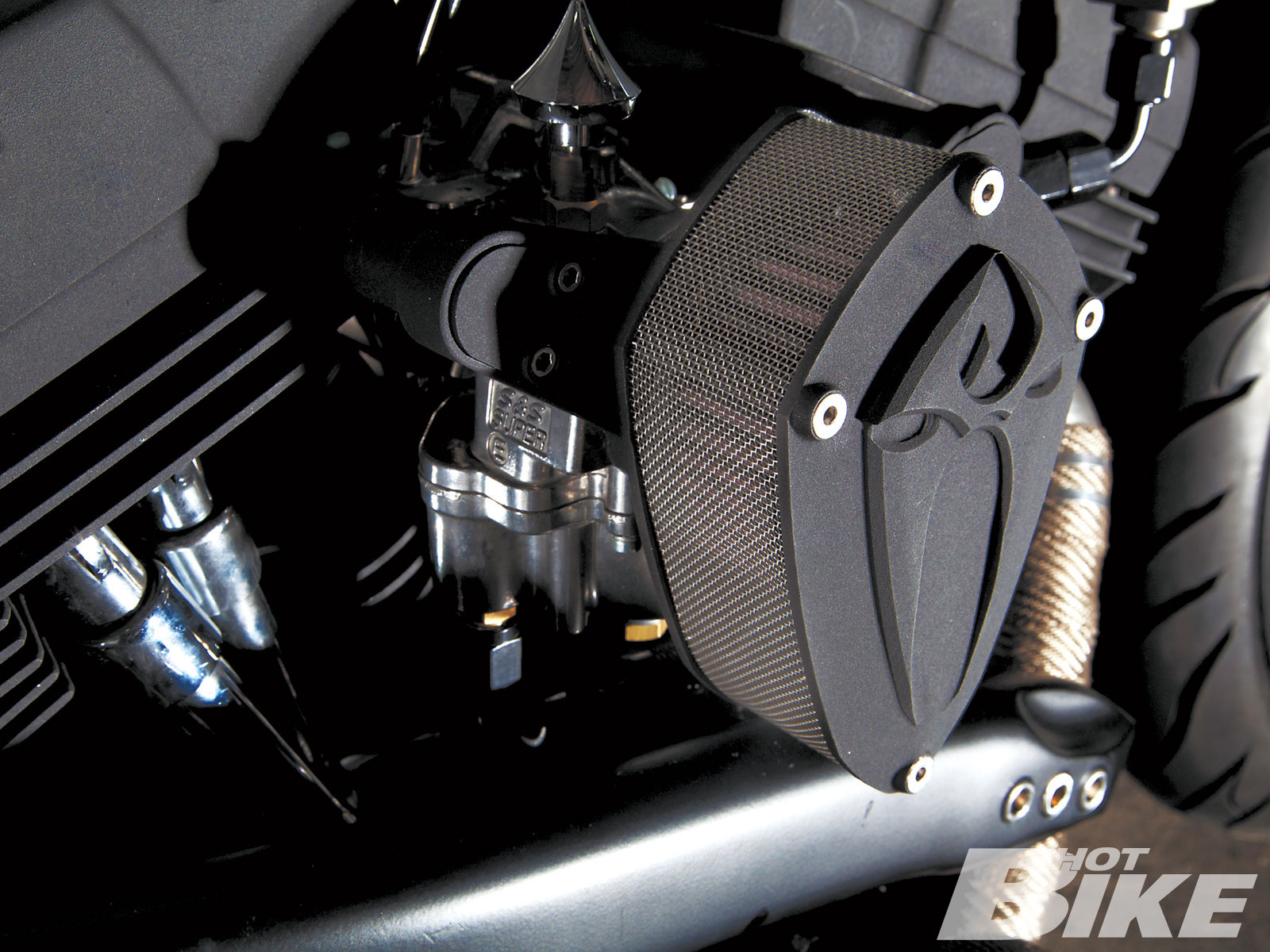 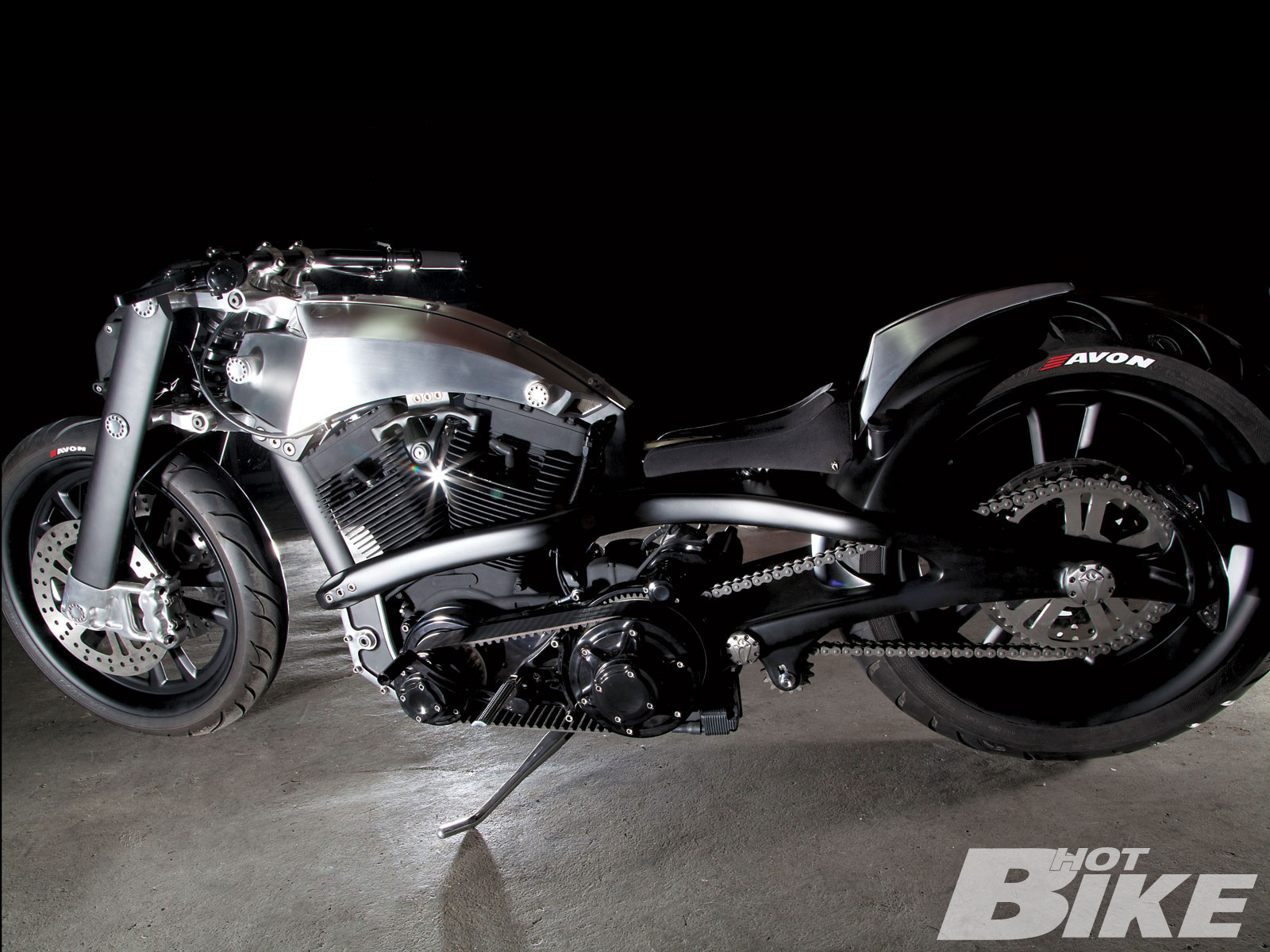 “A Chain Tensioner Incorporated in the under-side of the frame helps keep the final drive chain tight. Vents built into the gas tanks (mesh screens at the front and rear) help dissipate heat generated from the engine.” 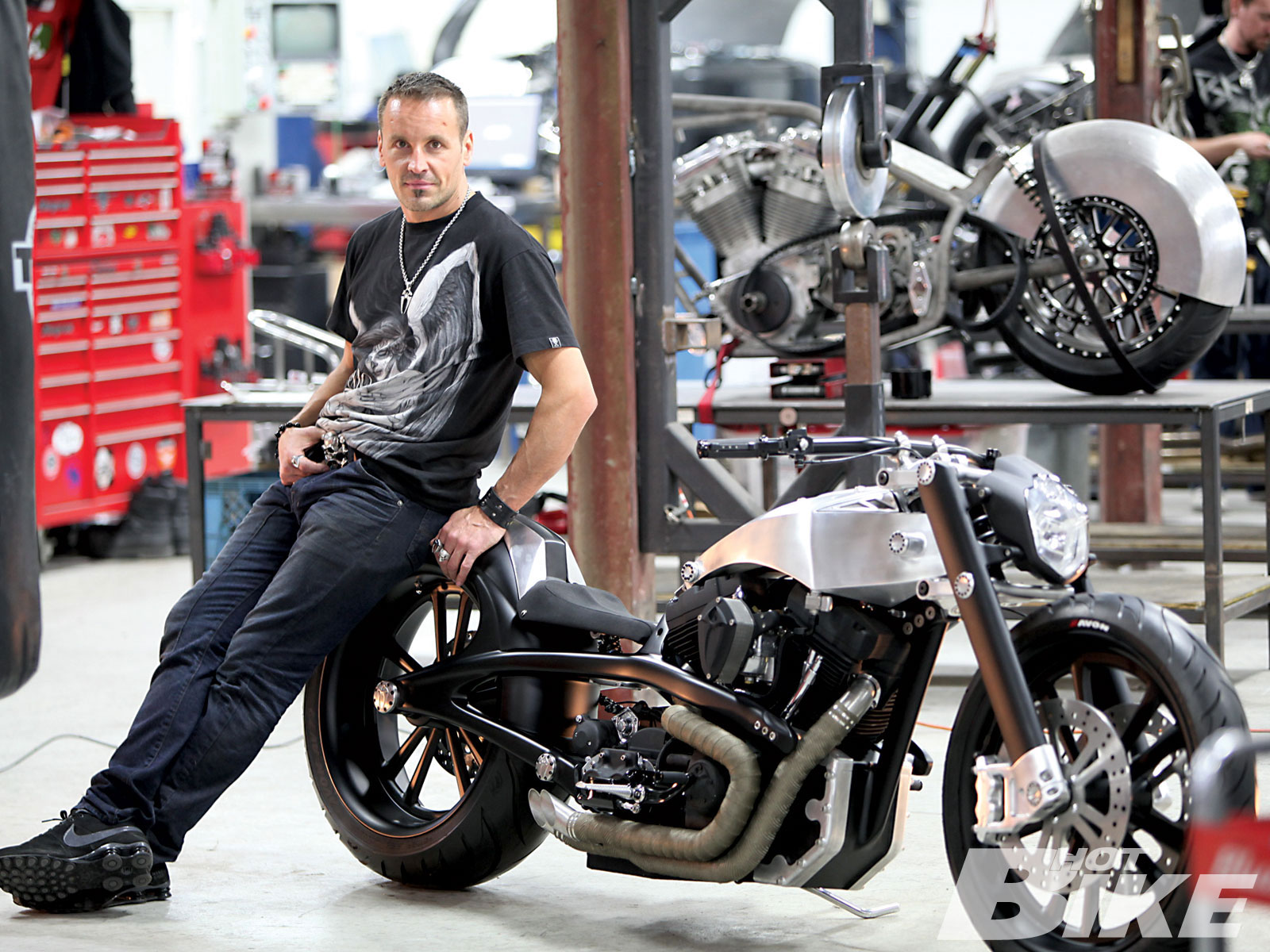 George looks like a giant next to the bike. He says the bike handles great and the combination of the Penske shock in the girder and the solo shock under the seat help make for a comfortable ride. 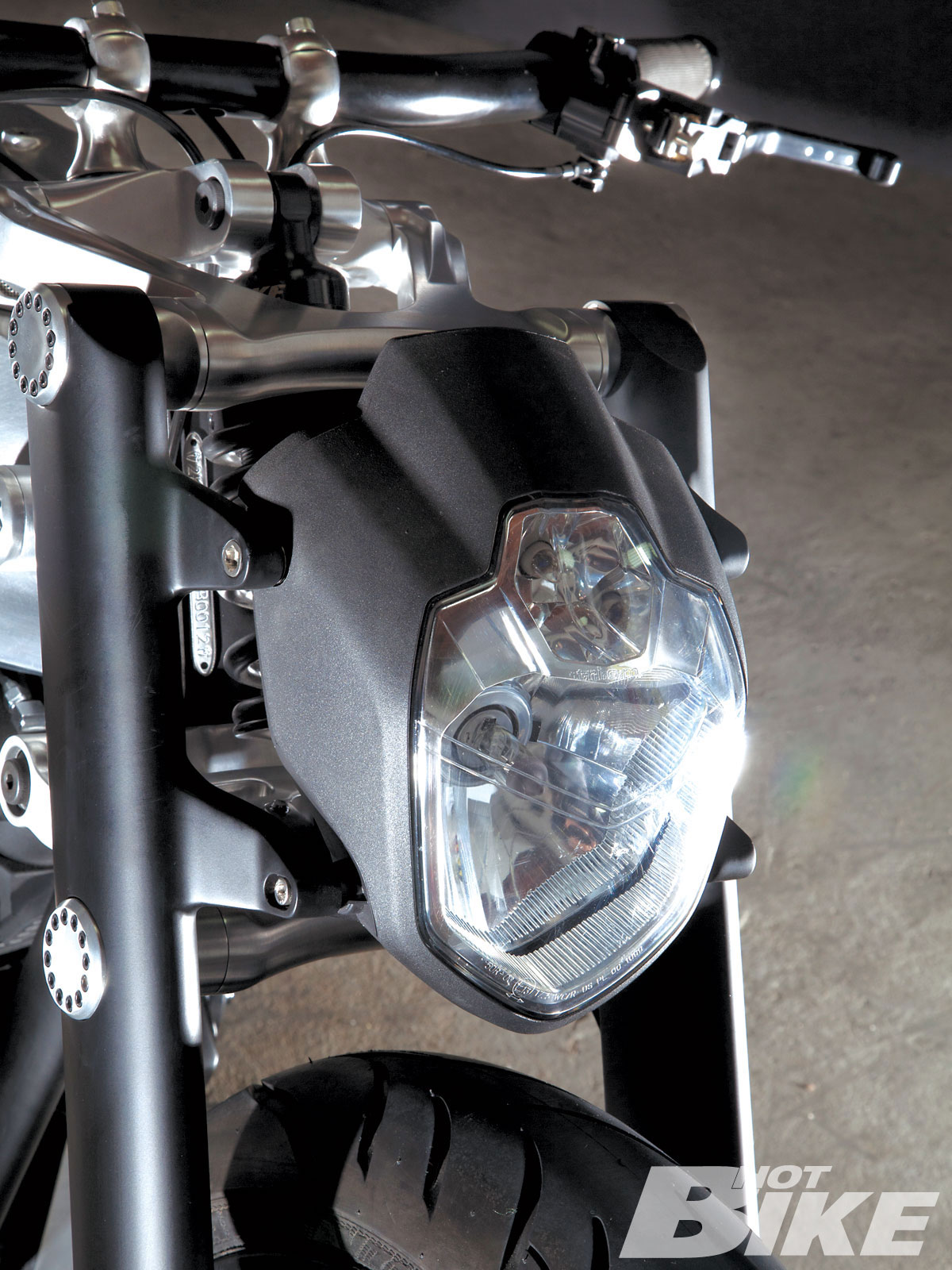 The oval legs on the RMD girder frontend ft well with the tapered oval tubing that the frame is made of. 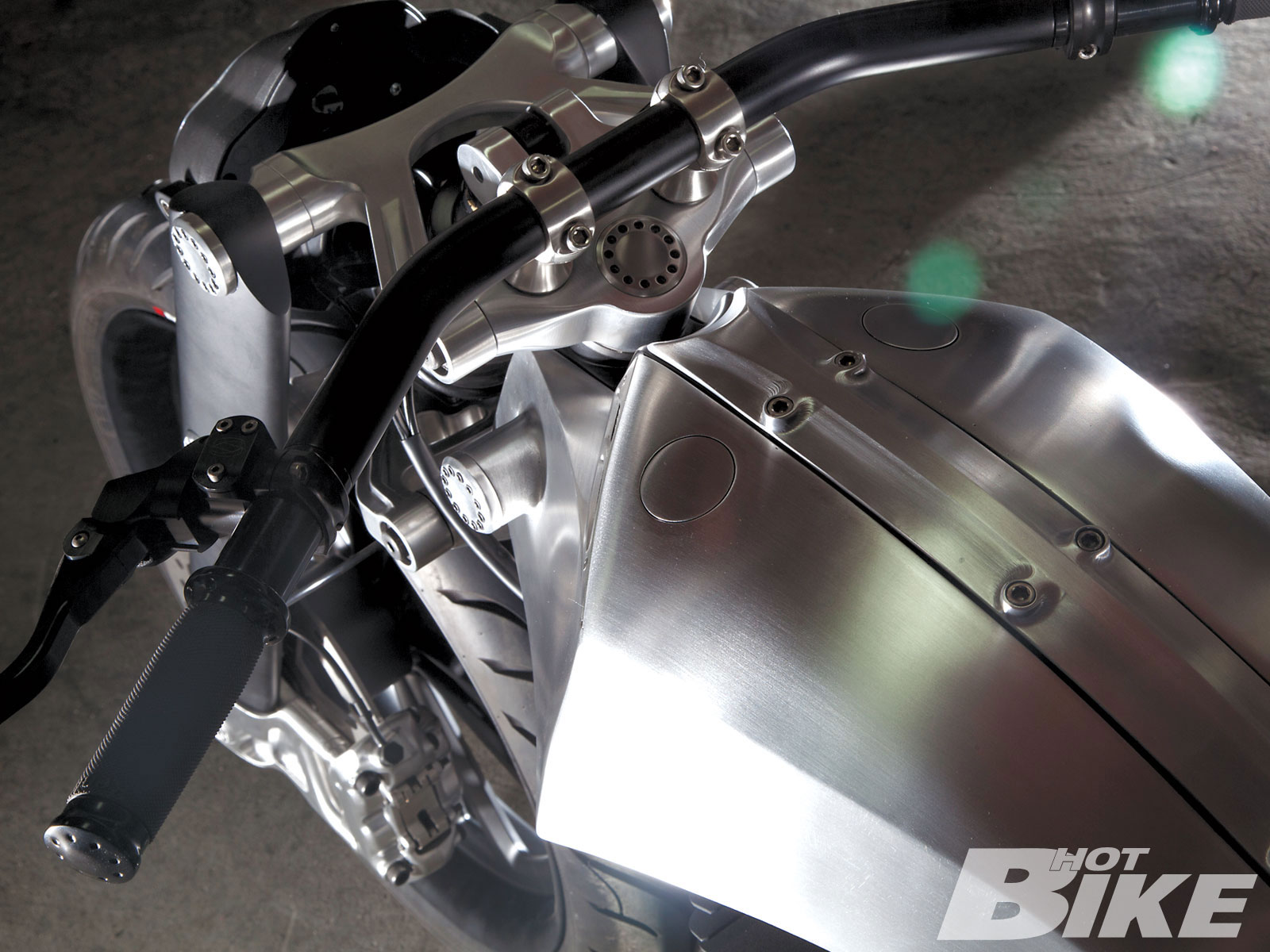 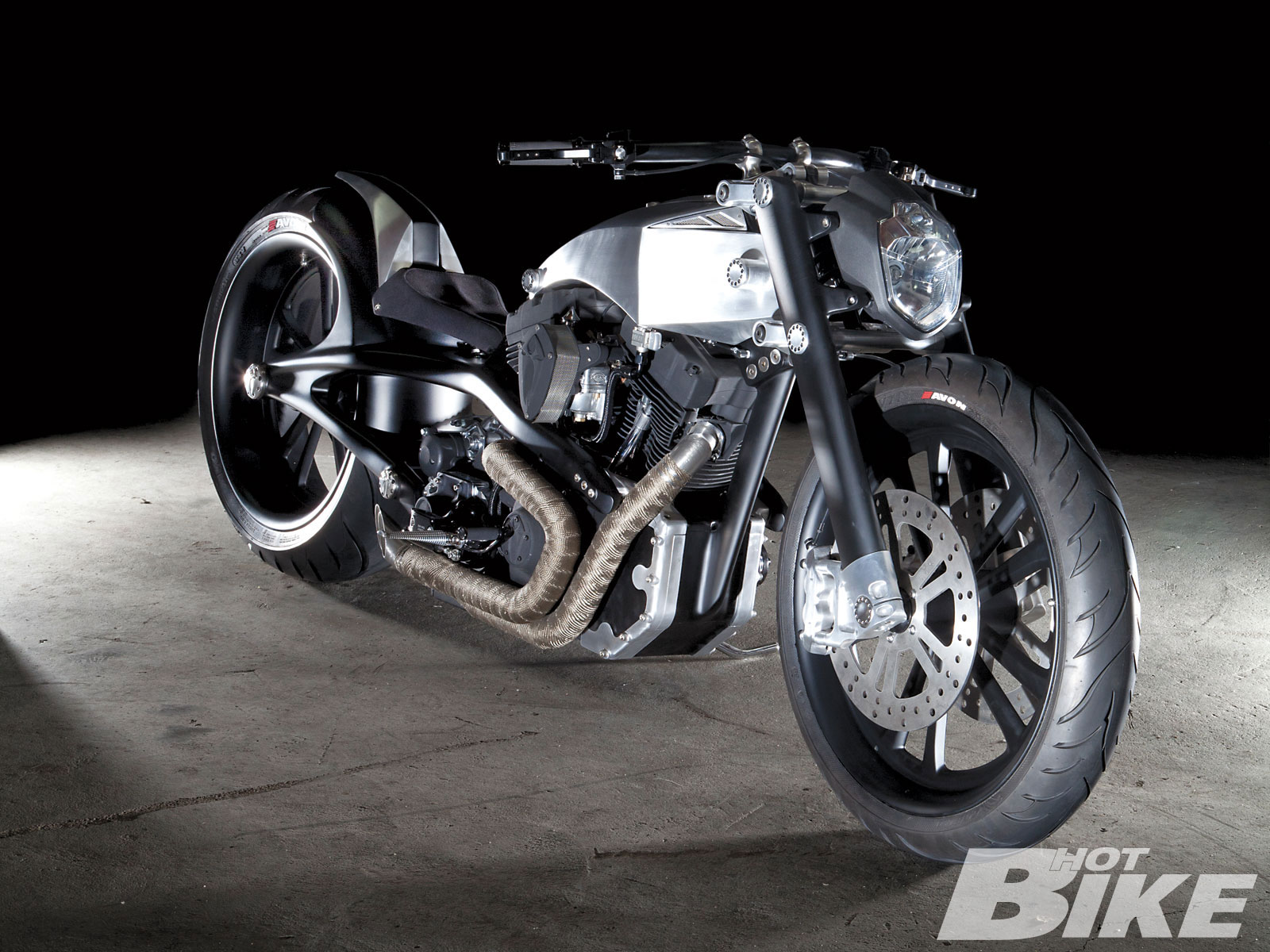 Sometimes you can give a custom bike a thorough look and it becomes clear that the builder isn’t just an ordinary guy with a welder and some handtools assembling bikes. You can notice a certain deliberate style and specifc cues within the bike that indicates either a strong motorcycle racing background or the detailed and artistic aesthetics of an engineer. Looking at this sleek and unique creation from George Tchor of Kreater Custom Motorcycles in Toronto, it’s evident his background encompasses both.

Speaking with George we quickly learned that his infuences in bike building comes from a wide array life experiences on the racing side that include working for a GT1 team on the Rolex 24 Hour and Canadian race team AIM Motorsports in the Grand AM Series, as well as dabbling in some motocross and superbike racing. On the more technical side, George worked as a heavy equipment mechanic before obtaining a degree in mechanical engineering.

Once out of engineering school, the hobby of building bikes as a side business exploded for George and so he decided to go at it full force and make it a full-time career. Now after more than 10 years, Kreater Custom Motorcycles has two shops, Kreater East and Kreater West (both located in Canada), with each shop loaded to the hilt with equipment and staff tackling everything from basic service to full custom builds such as this one.

With an average of half a dozen custom builds going on at any given time, it can sometimes be a waiting game for clients to get their projects into the mix. With an opening in the build schedule and after seeing the sketches George had drawn up for this bike, his client jumped on board.

As any smart person will tell you, it’s best to just let the master do his thing, and that was pretty much the case with in George’s drawing and gave him carte blanche to do whatever he wanted with only a few stipulations. Being a bit shorter in stature, the client wanted the bike to comfortably ft him, which is an obvious request with any build. “This was actually one of my easier clients, there was very little direction, only a few limitations. Mainly seat height and bar positioning,” George stated. “When I look at that bike, it looks tiny in some of the pictures. I’m almost 6-foot [tall]. Originally this bike was supposed to be about a foot longer and 4 inches taller, but I’ve got to accommodate my clients’ needs.”

As you study the sleek lines and raw mechanical nature of this bike, you come to realize that aside from maybe the drivetrain and controls, everything else is one-off/custom-made—and that’s pretty much the essence of a ground-up bike from Kreater. While it’s a pretty astounding bike in its entirety, the frame and gas tank are often what really draw people in.

The unique frame cradles and suspends the engine making the engine cases an integral part of the chassis. Unlike most bikes where the frame is typically all one piece, such as with a rigid, or two pieces (frame and swingarm) with a Softail, this frame is comprised of several pieces bolted together. “The backbone/midsection/rear fender and rear section (what would typically be the swingarm on a Softail) is all one piece. There are four pieces to that front motor mount which is the downtube, two halves, and the top plate,” George noted. “I made it in that manner so that it’s just three bolts and it exposes the oil flter. It’s all hidden, everything is nice and clean. The oil flter is in the standard location, it’s just encapsulated in the front motor mount. You just take the three bolts off then the top plate comes off and the oil flter is exposed so it’s nice and easy for servicing.”

Looking at the bike you might think there’s no oil bag, but it’s actually been hidden in the frame. The rear fender is incorporated into the rear frame section, and from the left side of the fender you’ll notice the fll tube for the oil tank. The actual oil tank is incorporated into the top transmission mount. Obviously George put a lot of time and thought into the design of the multi-piece frame to not only draw attention but be functional as well. What you may fnd really interesting about the frame is the material that it was made with. Instead of using traditional round tubing, George pushed the design even further by using tapered oval tubing. “When I started building the chassis, my team came to me with concerns on the direction of the project.

They were worried about its integrity. They thought it didn’t look like something that would actually function. They thought I was losing it. I told them, “After all these years you’re questioning my design? Just have some faith,” George chuckled.

The gas tank is two separate halves that were formed out of aluminum. With their angular and arched shapes, matching up each side to be a mirror image of each other was a task in and of itself. To show off the craftsmanship and skill of his Kreater team, George decided to leave the tanks in their raw aluminum state, which left no room for errors or ugly welds to be hidden by fller, bondo, or paint. In order to get the tanks to hug the top of the motor as tight as possible and keep the bottom of the tanks devoid of mounting hardware or tabs, the halves were mounted to the sides of the backbone. If you look closely, you’ll notice two cylindrical shapes, one at the front and one at the back of each tank half. George designed post-style mount so that the tanks actually detach from the backbone sideways. The posts are about 4 inches long with neoprene cushioners to absorb vibration. The tanks slide on over the posts and are then secured in place with bolts. The tops of the cylindrical shapes are covers that hide the mounting bolts/posts. Since the frame and gas tanks hug the engine so tight, George incorporated vents into the front and rear of the tanks so they wouldn’t absorb a ton of heat from the engine.

As they say, good things come to those who wait. And while the future owner had to patiently wait a little more than a year for his dream ride to be completed, it’s safe to say it was well worth it. We came across this bike in the Avon Tire booth this past February while attending the V-Twin Dealer Show, and as soon as we laid eyes upon it, we fell in love with its intricate frame, industrial style, and Kreater’s new twist on the Pro-Street style. We knew it would make a killer cover bike. The only thing missing to make this incredible bike even more amazing was a smoking hot model. Luckily photographer Paul Buceta took care of that lined up the beautiful Kristie Taylor to pose with the bike. With her own sleek and elegant lines, we’d say Kristie complements the bike perfectly. And while she may consider herself just a small town country girl from Grimsby, Ontraio, she’s soon to be big time, having just scored a cover with Playboy Magazine. To see more of Kristie check her out on Facebook.com/kristie.taylorGTA, twitter @_KristieTaylor, or on hotbikeweb.com. HB

Melanie Inglessis has owned steeds ranging from a 1954 BSA to a GSX 1100 Suzuki chopper to an H-D hardtail, […]