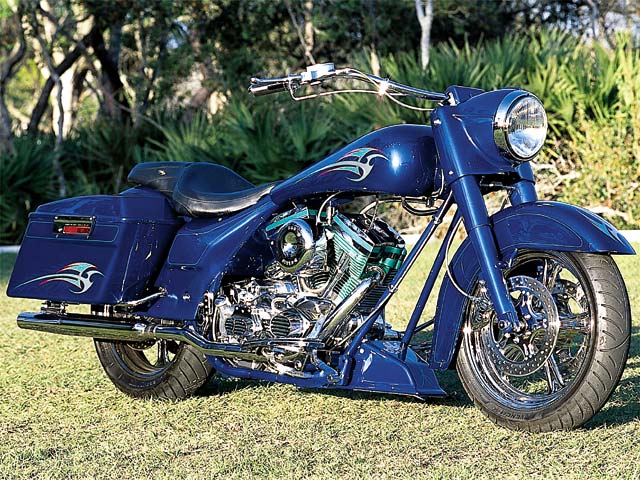 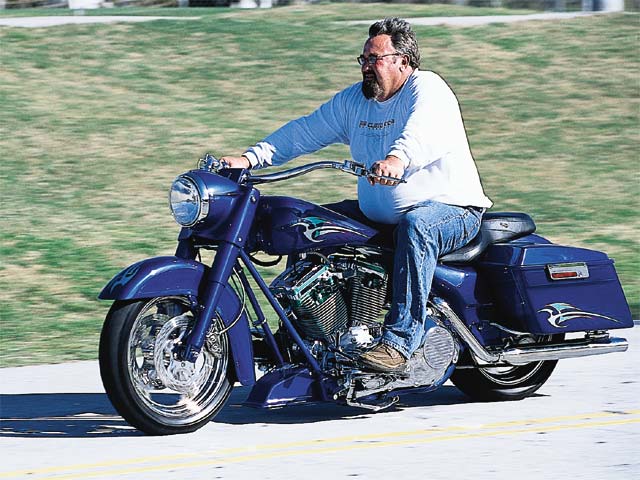 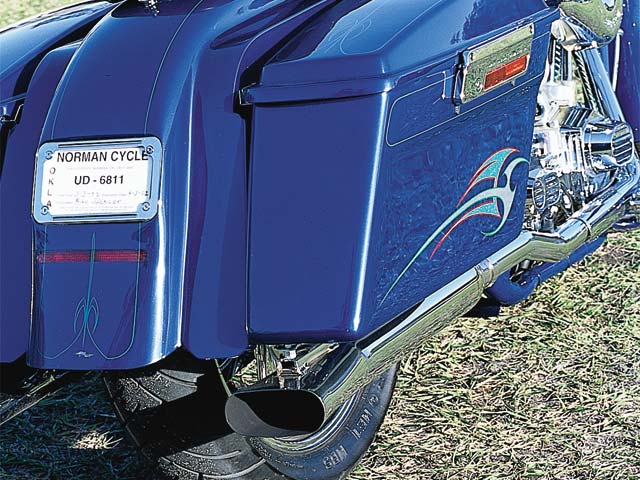 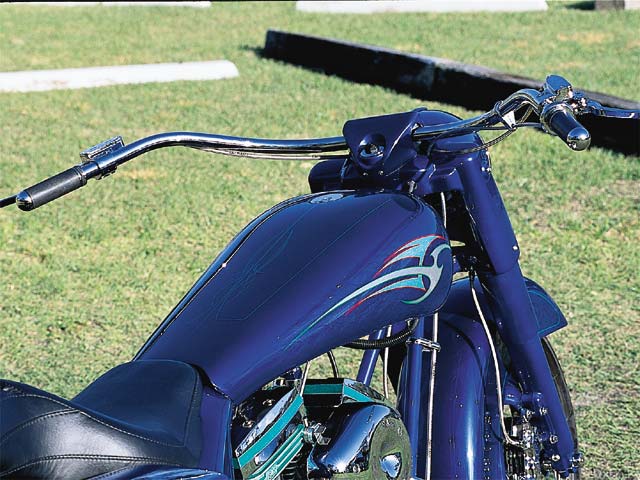 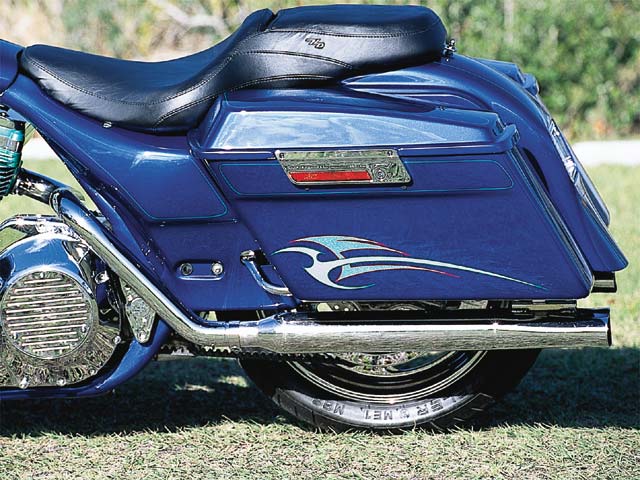 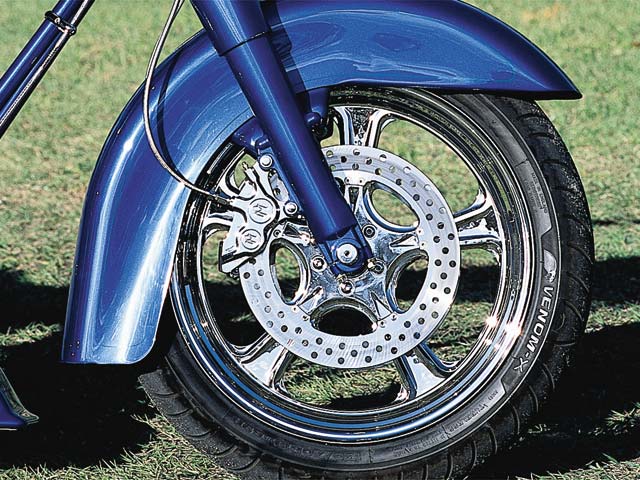 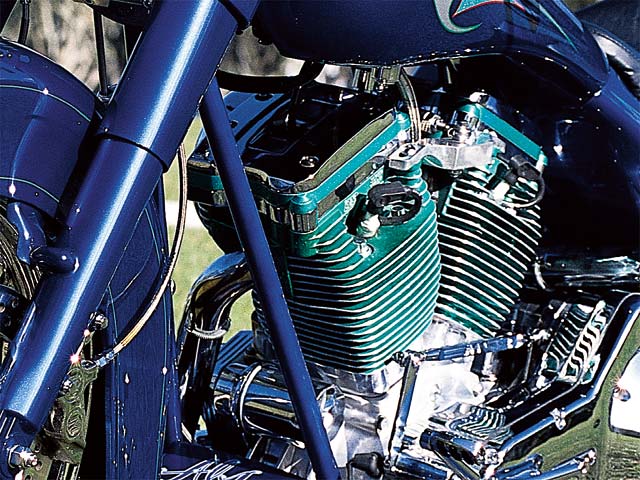 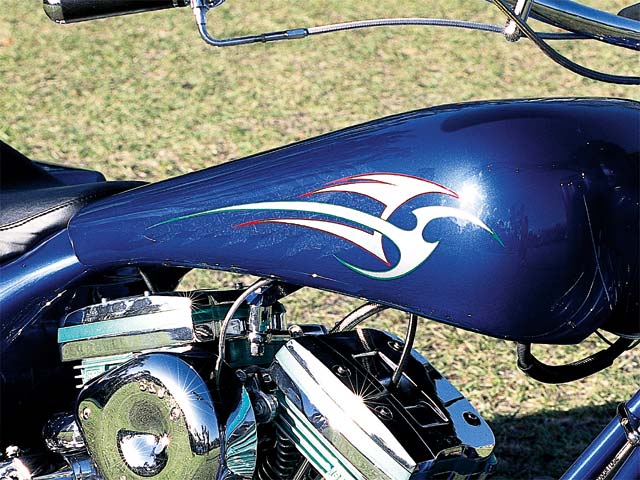 Alan Spencer lives in Edmond, Oklahoma, and you might say he’s responsible for the growth of the town. Spencer is a general contractor who specializes in building subdivisions. By the time he gets everything approved and is able to settle into the seat of his dozer, he’s ready to start some serious work. From grading the roads to overseeing the final trimming on the homes, Spencer is responsible for it all. So at the end of a long day, how does Alan decompress? He goes out to his shop behind the house and creates beautiful custom bikes like the one you see here.

Since 1973, Spencer has been building hot rods and motorcycles under the moniker of Al’s Rod Shop. Although he has always built bikes, the emphasis in the early days was more toward rods. For the last 16 years, he has been highlighting his talents by creating more two-wheeled toys than four-wheeled ones.

Since it had been some time since he had built a bike for himself, Spencer decided he needed a new project to work out the kinks that some stressful days dish out. This time he decided to build a bagger that would smooth out the road — making his dozer the last thing on his mind.

While at a local shop, Alan eyeballed a wrecked Road King in the lot. The motorcycle was pretty trashed, but after taking a good, close look at it, he determined the frame could be used for his new bike. Just that quick, a deal was struck, and Alan went home with the motorcycle in the back of his pickup.

With the bike on the lift, Alan began tearing off anything that was not a frame member. Out came a portable band saw, and in no time the frame resembled a puzzle more than anything else. By the time he mocked-up and welded the tubing back together, he had a frame that sported 2 inches of upward stretch and an additional 6 inches in the backbone. The swing arm also met up with the band saw; when it was finished, all that remained was the portion that housed the cleveblocs. This piece was welded to some rectangular tubing to create a new swing arm capable of carrying the soon-to-be mounted 180 rear tire. New shock mounting lugs were positioned to reduce the ride height by 1-1/2 inches. The height was lessened even more with a set of 1-inch-under shocks made by modifying the stock units. Up front, a set of H-D trees holds Harley tubes and lower legs that contain modified springs and air boots used to drop the front of the motorcycle 2-1/2 inches to match the back.

A pair of P.M. Vintage wheels is home to Metzeler rubber, a 130x60x18 up front, and a 180×18 out back. Slowing this bagger down are P.M. Vintage rotors and P.M. calipers. The rear wheel was detailed with the addition of a matching Vintage drive pulley.

Now that Alan had the chassis to his liking, it was time to begin the sheetmetal. Figuring that the original bags would be reused, he decided to begin at the back of the bike and hand-form a steel fender. This would flow with the lines of the bags and fill the gap between the bags and the fender. By filling this space, it gives the illusion that the bags and fender are a single unit. Moving forward, Alan hand-hammered a set of side covers that extends from the front of the seat; runs along the frame tubes; and ends at the front of the bags. The smooth lines of the bike continue to flow through the long, stretched gas tank that was also built by Spencer. The sheetmetal was finished up with the addition of a custom air dam and a front fender.

The paintwork would be handled by Spencer’s long-time friend Mike Robbins, owner of Mike Robbins Paint — located about 15 miles south of Edmond, in Oklahoma City. Before the House Of Kolor’s Lollipop Blue was applied, Robbins spared no effort molding the frame and making certain the sheetmetal was as smooth as glass. As the paint dried, Spencer and Robbins kicked around a few ideas for some graphics. By the time the duo had a half-dozen sketches in front of them, Alan decided on one that would add a subtle and clean look to the bike without taking anything away from it.

When it came time for a power plant, Alan knew which route to take. He wasn’t looking to do any drag racing, but wanted to be sure he had plenty of power to get-up-an-go with the twist of his wrist — a 96-inch S&S; was just the ticket. The S&S; cylinders and Branch heads were sent to High Performance Coatings for a healthy dose of an aqua powdercoat. From there they were shipped to Peerless Plating and treated to show-quality polish along with the S&S; cases.

Alan assembled the motor with S&S; wheels, rods, and pistons. Bringing it to life are a Crane Hi-4 ignition, a Carl’s Speed Shop cam, an S&S; carb, and a set of Bub pipes.

One of Alan’s own Eagle Billet primarys is used to house the enclosed H-D chain drive and a Barnett clutch that spins a set of five-speed H-D gears. The primary is dressed up with an Eagle Billet clutch cover that matches the point cover on the other side.

By now the bike was getting close to completion. A few more nights after work would be just about all Alan needed to finish up. He began by mounting a set of White Brothers Big Beach bars on Eagle Billet risers that are positioned behind the Harley-Davidson headlight.

Performance Machine hand controls complete the front while an Al’s Rod Shop custom LED taillight conveys his intentions to those following. The H-D seat was sent to Danny Gray for some custom foam, contouring, and leather. As soon as it arrived back in Edmond, it was placed on the bike, and the project was proclaimed complete.

Next time you think baggers are boring and have no style, just remember, there’s a guy in Oklahoma that can do a damn good job changing the way you think about them.

Front ABS Braking setup mounted between the downtubes on a Heritage Softail Classic. Adjustable vented lowers on a Road Glide […]

Summer’s almost here, which means that you’ll be planning a ride out of town at some point in the next […]

Stay Connected With Any Of These Smartwatches