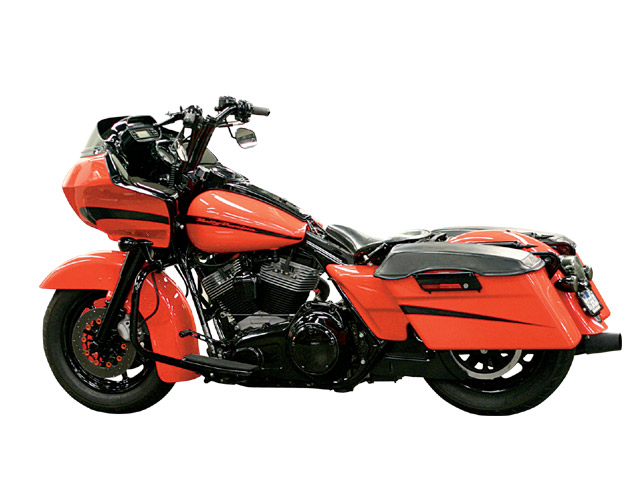 The ’07 Road Glide awaited the swap. 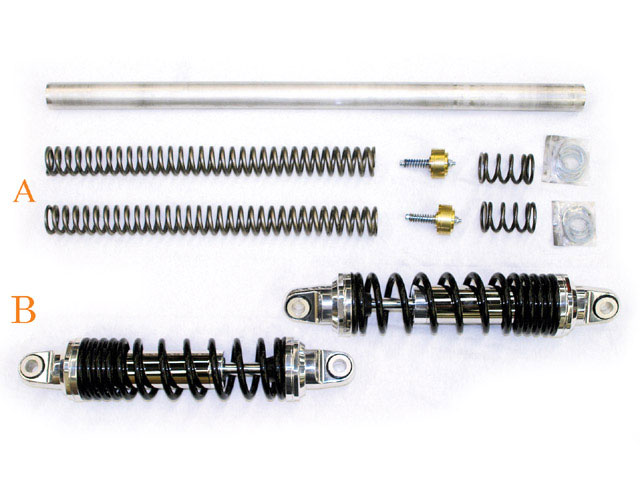 Here’s the Race Tech front and rear system we used for this article. The Caddies (B) and the FLEK S3810 (A)(from left to right: two springs, Gold Valve Emulators, lowering springs, washers, and spacer on top). 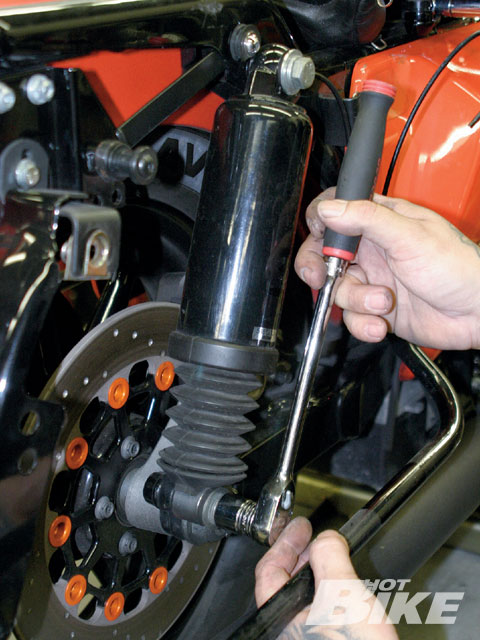 The rear installation procedure was simple. Matt rolled the bike on the lift and placed a jack under the frame and lifted it until the back wheel wasn’t resting on the ground. With the saddlebags off, Matt removed the two shock bolts from each shock and extracted the shocks one at a time. 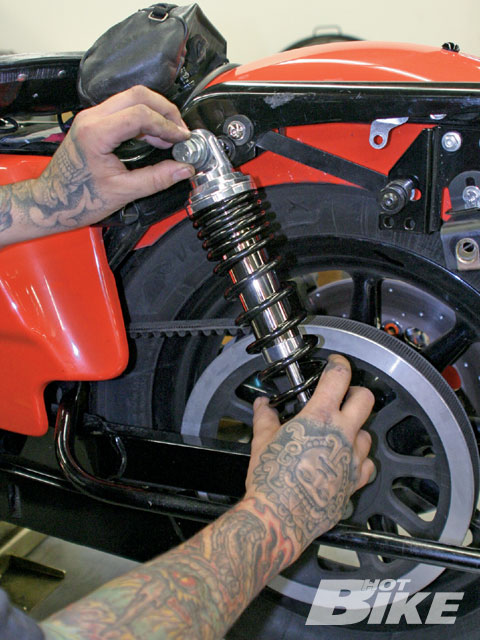 Next, Matt installed the new Caddies with the stock hardware and a dab of blue threadlocker and he was finished. 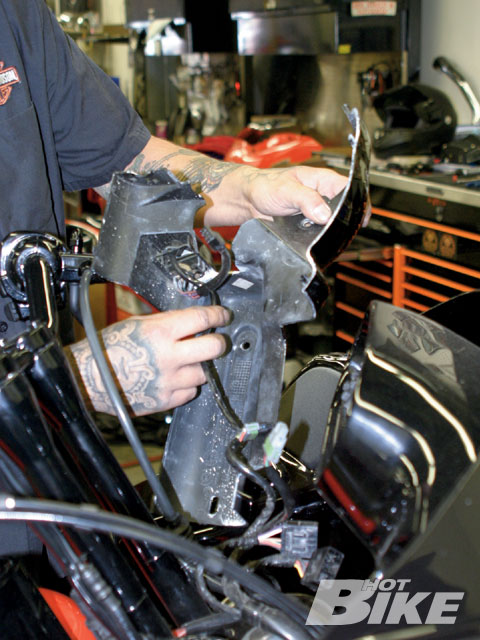 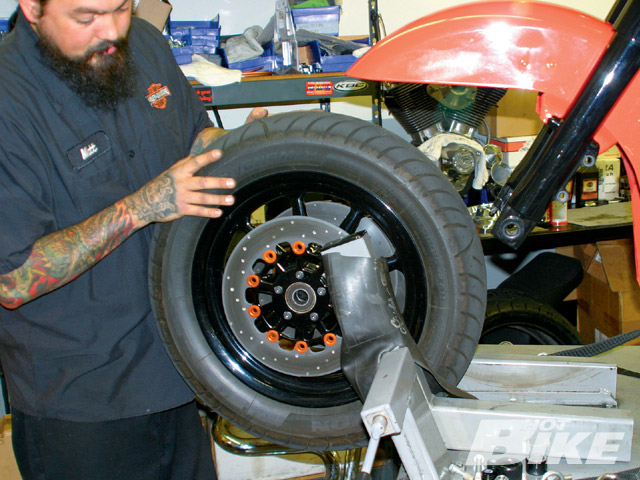 Matt then removed the front wheel and fender in order to take the front forks out. 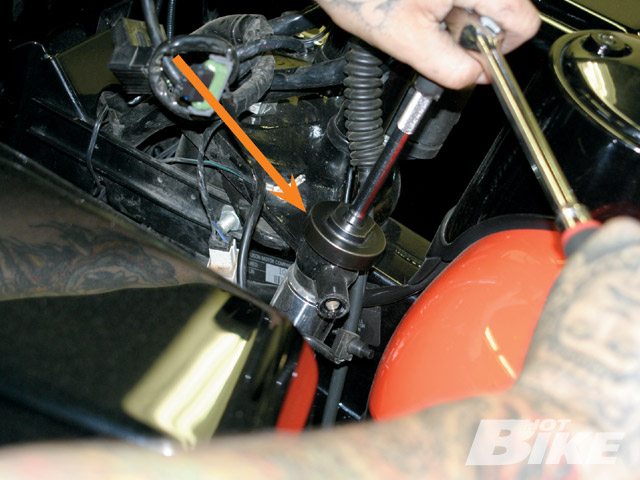 To loosen the fork cap bolts he used the JIMS fork tool shown here (arrow). He also removed the axle holders from each fork leg. Then the pinch bolts were loosened from the lower tree and Matt slid the fork legs out one at a time. 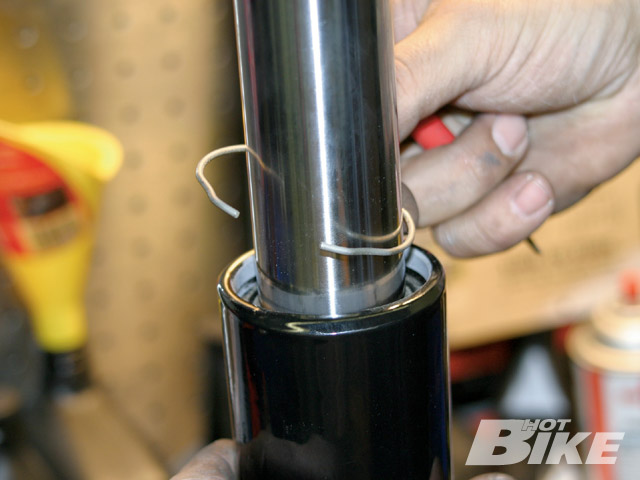 With the forks out, Matt disassembled each tube. First he removed the snap ring that sits atop the fork slider. 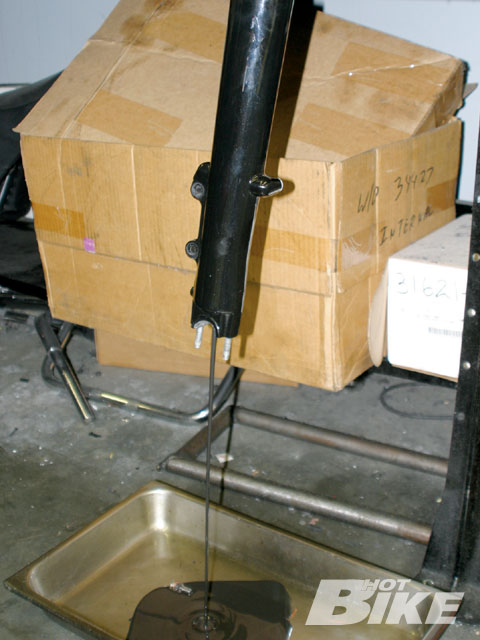 Then, he removed the screw at the bottom of the fork leg and drained the oil. 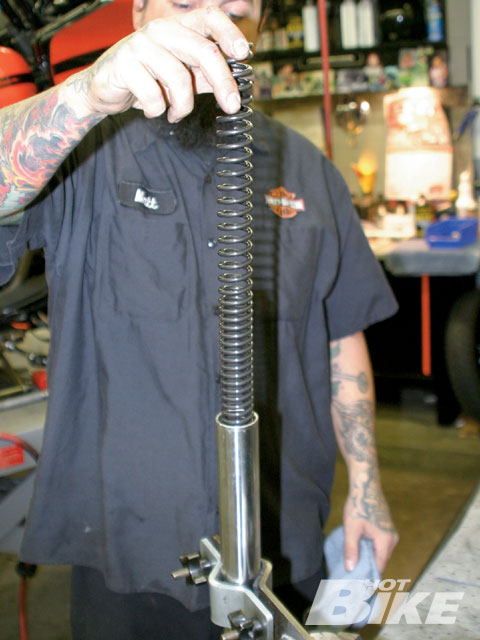 Next, the fork slider was taken off, and Matt disassembled the entire fork tube, removing all the internals in order to install the Race Tech setup. He repeated the same process for the other fork tube.

Next, Matt cut the spacers for each fork. The length of spacer needed for each fork was 3 1/2 inches from the washer sitting on top of the new spring to the top of the fork tube. He then cut two 3 1/2-inch spacers and removed the springs to install the fork oil. He collapsed the slider, then poured the oil in, pumped the slider up and down to suck out the air bubbles, then he used a fluid evacuating tool to get the correct amount of fork oil. Oil level measured 6.3 inches from top of fork tube (level varies depending on model). Lastly, he re-installed the spring, washer, spacer, final washer, and capped off each fork leg.

Matt reinstalled the fork sliders, the dampener rod bolts, bushings, seals, and the snap rings, and checked the spring preload by pushing down on the forks. This ensures that the Emulators are seated properly. Everything checked out, so he re-installed the fork legs one at a time.

And then he buttoned up the axle holders on the end of each leg.

Finally, Matt reinstalled the wheel, front fender, brakes, and the instrument cluster, ignition switch, and the entire instrument nacelle cluster up top. He then took the new Race Tech setup for a ride, and reported a stellar, smooth, cushy cruise, and he was more than happy with the new suspension’s performance.

A motorcycle’s suspension plays an integral role to the way the bike rides and handles. It’s one of the essentials of a motorcycle. There are many suspension styles out there for various types of riding. And if you log a lot of miles and are looking for something that is going to make long hauls more pleasurable, Race Tech, located in Corona, California, may have what you need.

For the rear, Race Tech’s Caddies Twin Shocks ($699.99) might be a good fit because they have been mitrogen pressurized and feature progressively wound, high performance, chrome silicon springs. Race Tech Gold Valves inside the shock body make up the damping system and can be custom valved to your specs. The Caddies are available in an assortment of lengths with chrome or black springs and feature adjustable spring preload. The shock shaft is hard-chromed, and the body is polished chromed steel with polished billet aluminum eyelets and spring collars. The seal head features a triple-lip design and the shaft bushing has been Teflon coated.

Up front, the company’s FLEK S3810 front fork spring setup with Gold Valve Cartridge Emulators ($259.99) might be the way to go because the Cartridges claim to keep the front plush while still keeping it firm when needed. The Gold Valve Emulators are tunable valves that sit on top of the damping rods and are held in place with the main springs. This makes them both simple to install and completely tunable for all conditions and rider preferences. The springs in the kit are made from chrome silicon, and feature a high stiffness to mass ratio, and they’re shot peened, heat treated and preset to prevent sacking (compressed, shorter than new). The kit also comes with a lowering kit to drop the frontend down 1 to 2 inches if so desired.

We had a ’07 Road Glide that had plenty of miles logged on the stock suspension and was due for an upgrade. The swap took place at Anaheim-Fullerton Harley-Davidson and it was a relatively quick and easy installation procedure that can be done in a home garage. Service Technician Matt Cortez performed the install and it took roughly two hours to complete.

Damping Rod Basics
According to Race Tech, Damping rod forks don’t work very well in stock form. A damping rod fork controls the oil flow through a series of simple fixed size holes in a tube. The problem is these holes are only the right size for one type of bump so 90 percent of the time they are too big or too small. For instance when the fork encounters a slow speed movement (speed the fork compresses not how fast the bike is going) from a small bump or dip the oil flows un-restricted and too quickly resulting in a vague or mushy feel to the rider. When a high-speed fork movement is required from a large or sharp edge bump the damping rod holes are too small for proper oil flow resulting in harshness due to the fork not compressing fast enough. This effect is referred to as Velocity Squared Damping (V) as the oil velocity squares based on the speed of the fork compression.

When the Gold Valve Emulator is installed the compression holes at the bottom of the damping rod are over-drilled so that they no longer restrict the oil flow through the center of the damping rod. As the oil reaches the Emulator it is first controlled by a small by-pass hole in the Emulator Check plate. This small opening provides for a firm controlled feel to the rider when slow velocity smooth edge bumps are encountered. When a sharp or square edge bump increases the velocity of fork compression the spring loaded check valve on the Emulator controls the oil flow and acts as a variable valve. Based on a combination of spring rate (several check plate spring options are provided with the Gold Valve Emulator kit) and the Emulator check spring preload setting, the damping is no longer a V damping characteristic but instead the damping becomes nearly identical to the way a Cartridge fork performs in a digressive velocity manner offered by modern bending shim stacks found in a cartridge fork. The Gold Valve Emulator controls compression damping completely while rebound damping is controlled by oil viscosity (typically 15-30w) the Emulator offers enough adjustability to work with any weight of oil required for optimum rebound control. So essentially, the harshness is removed from the fork action resulting in a firm yet plush ride with much greater feedback and control to the rider under varying ride conditions.

Things you saw at Sturgis 2012

There is no shortage of oddities to be seen at Sturgis. What did you come across that blew your mind?