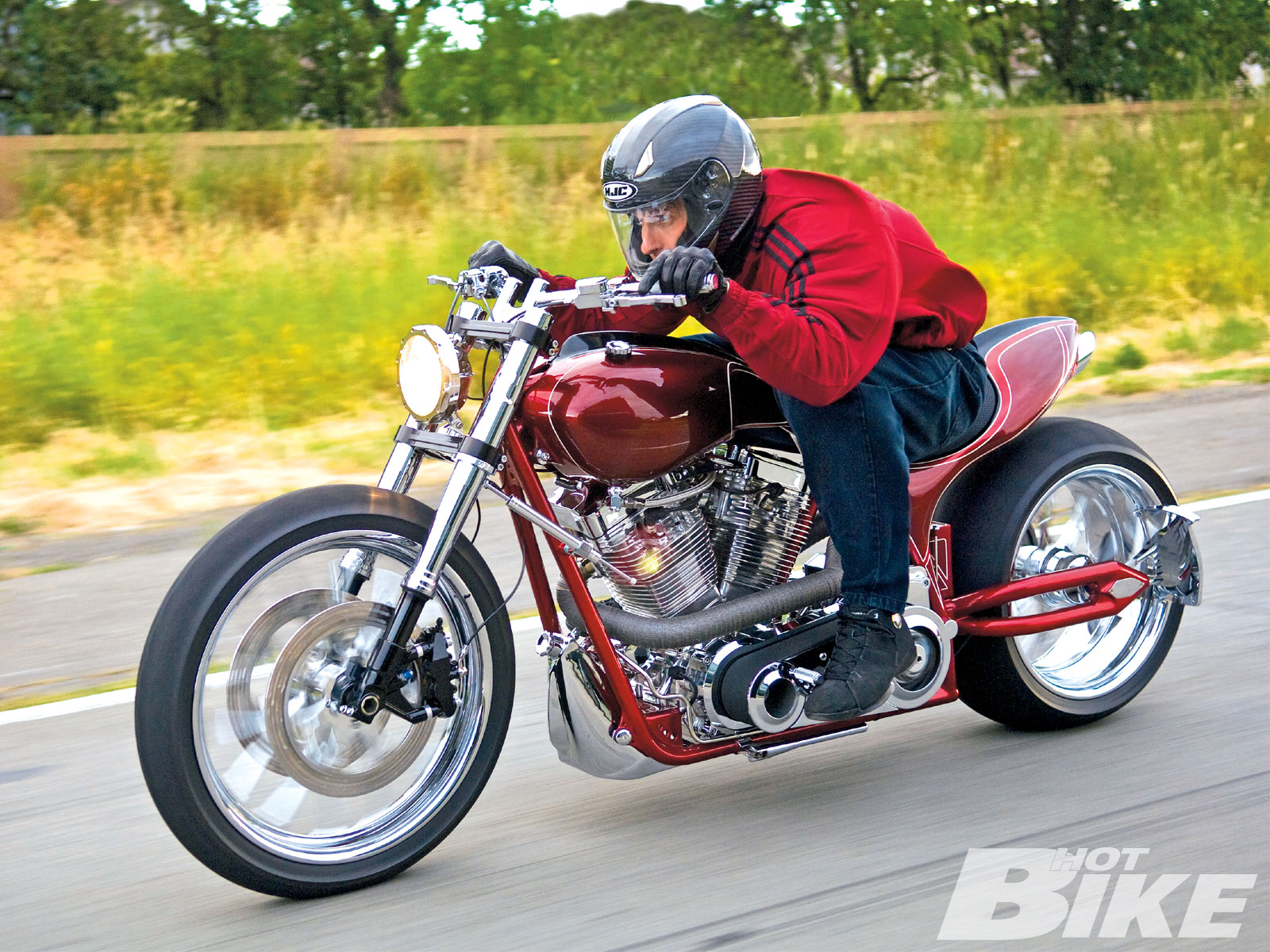 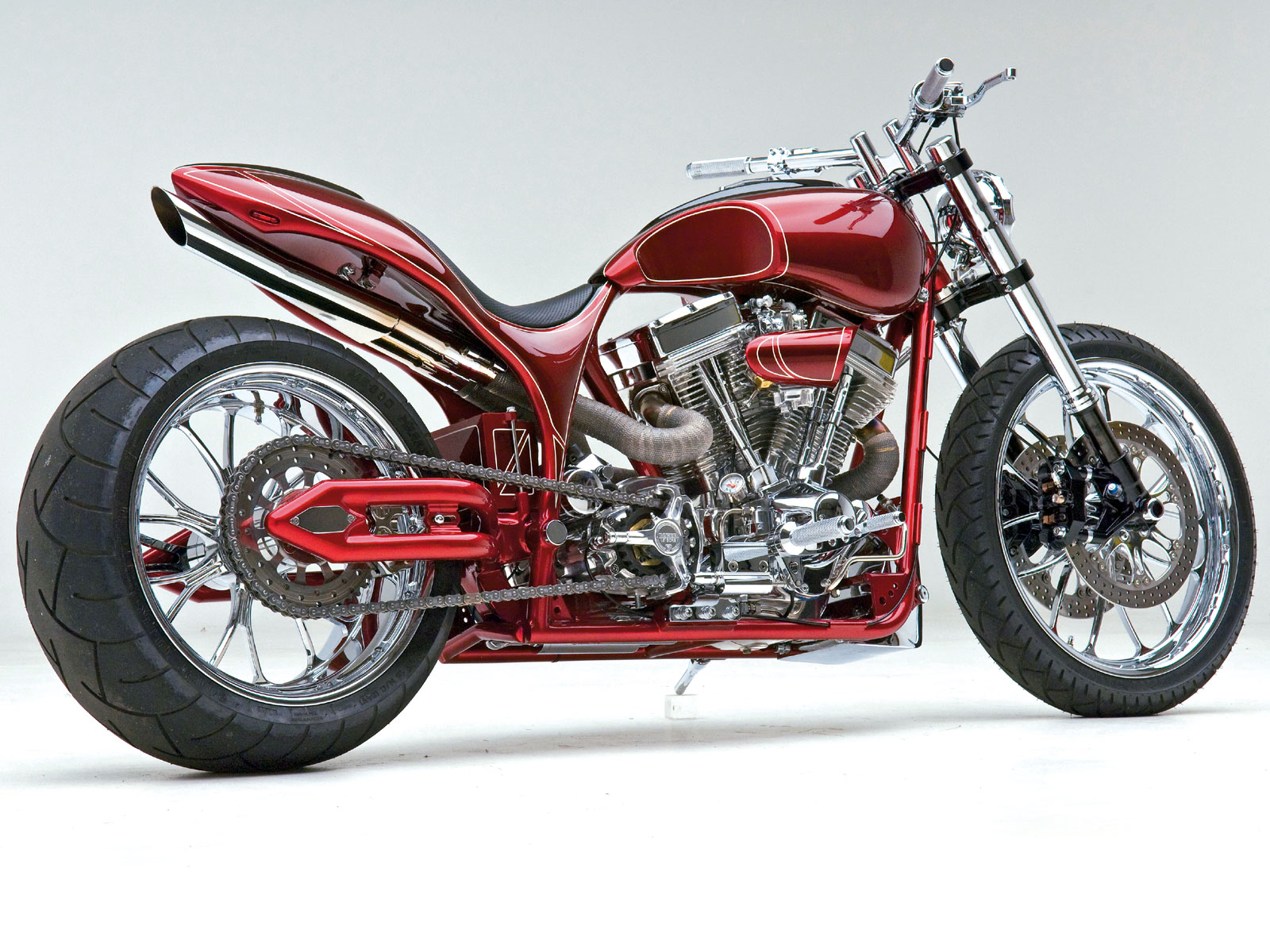 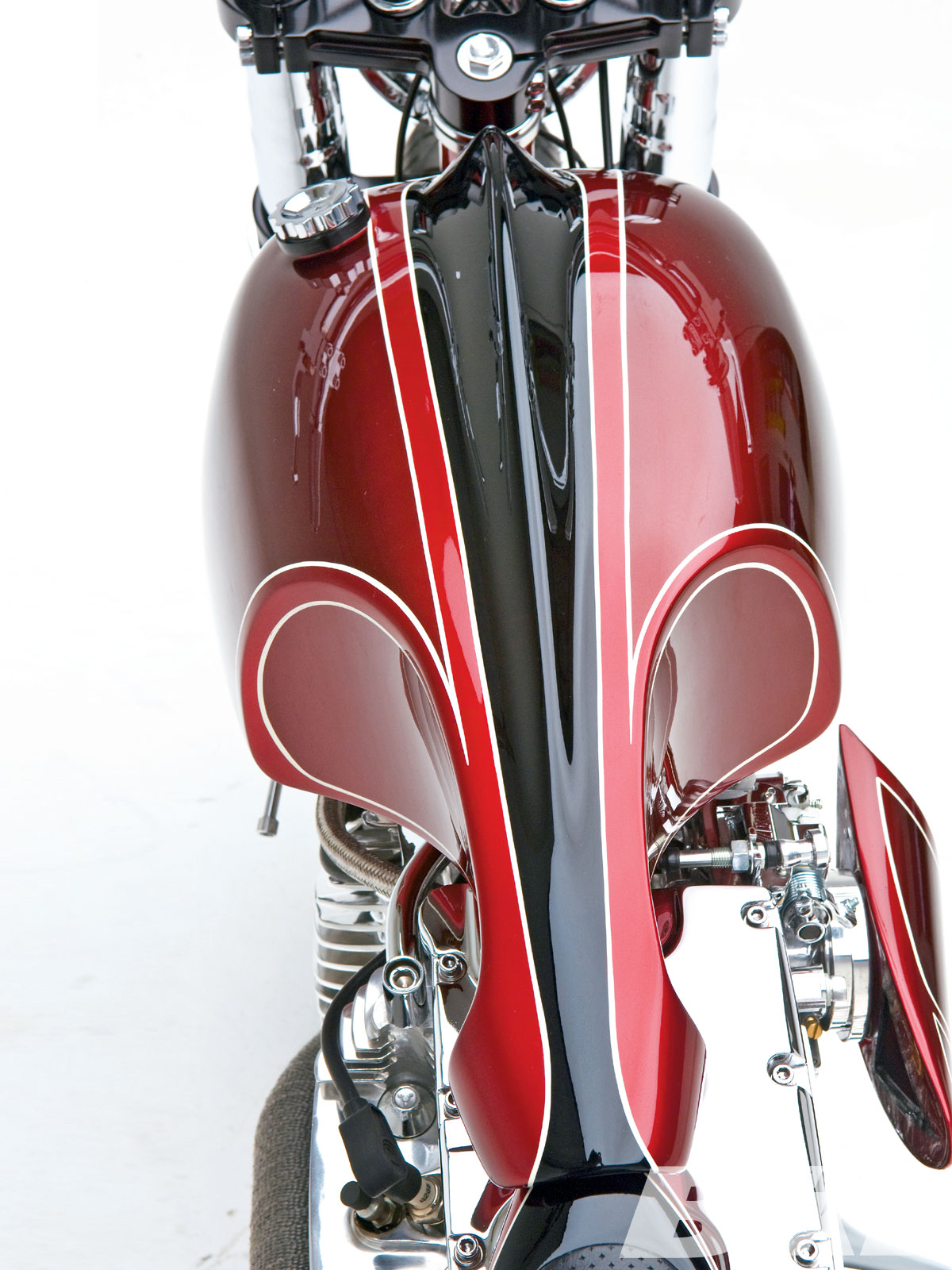 The extremely concaved rear of the tank allows the rider to bring his knees in tight for better aerodynamics. 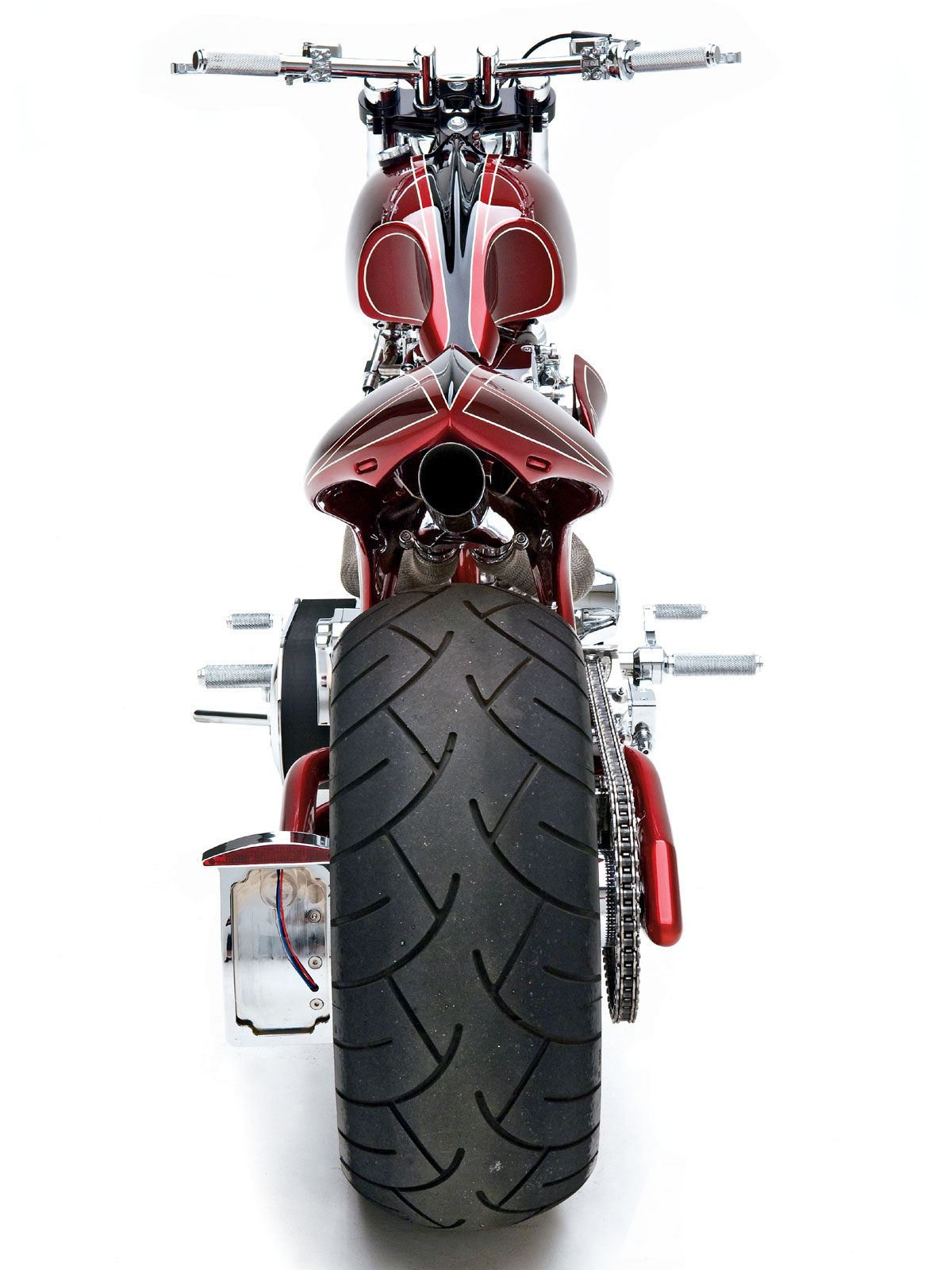 “The engineer-ing involved to get everything to fit perfectly and look right in a one-off machine is the hardest part.” 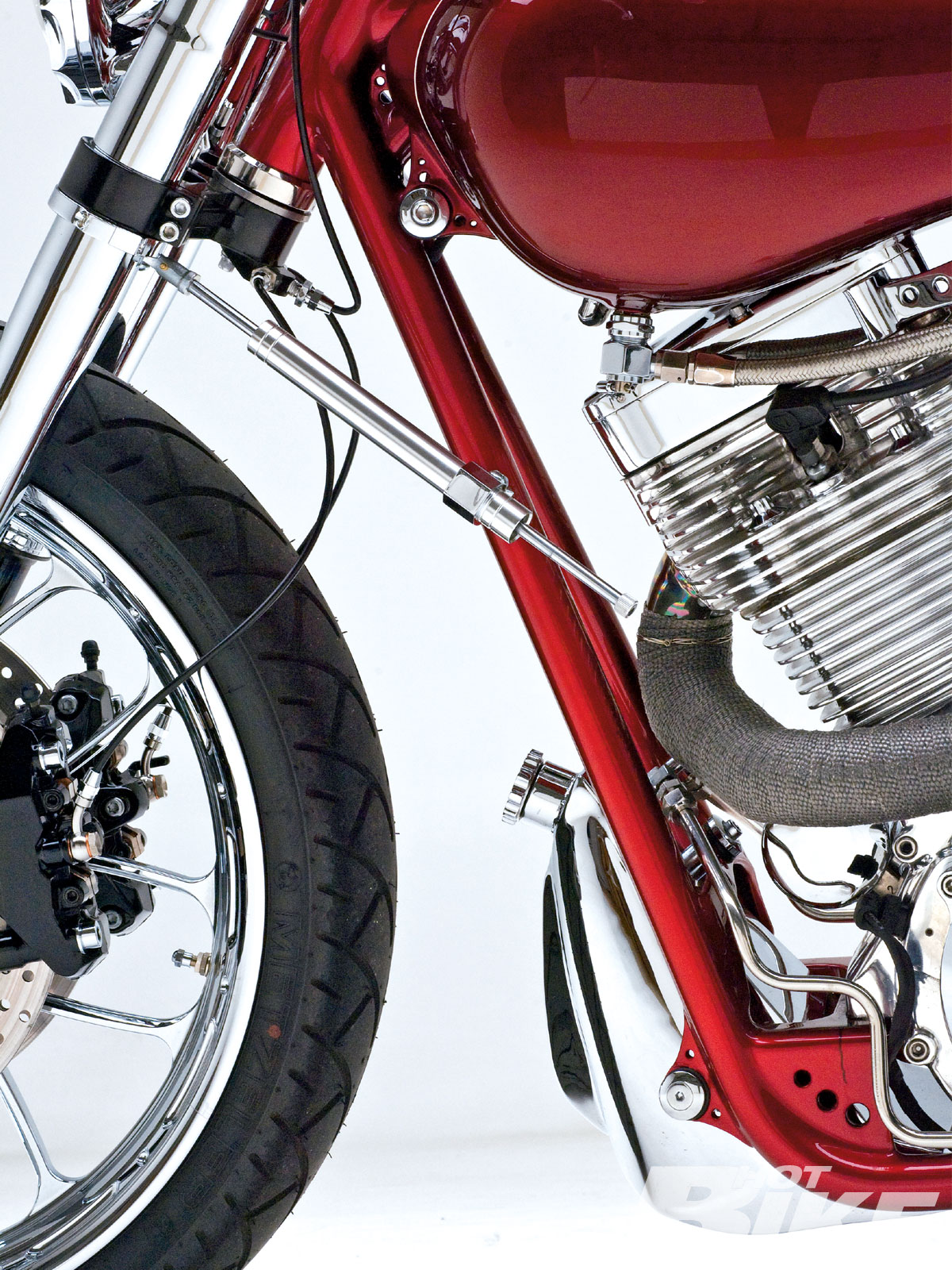 The steering damper helps keep the frontend under control, especially when coming down from a high-speed wheelie. 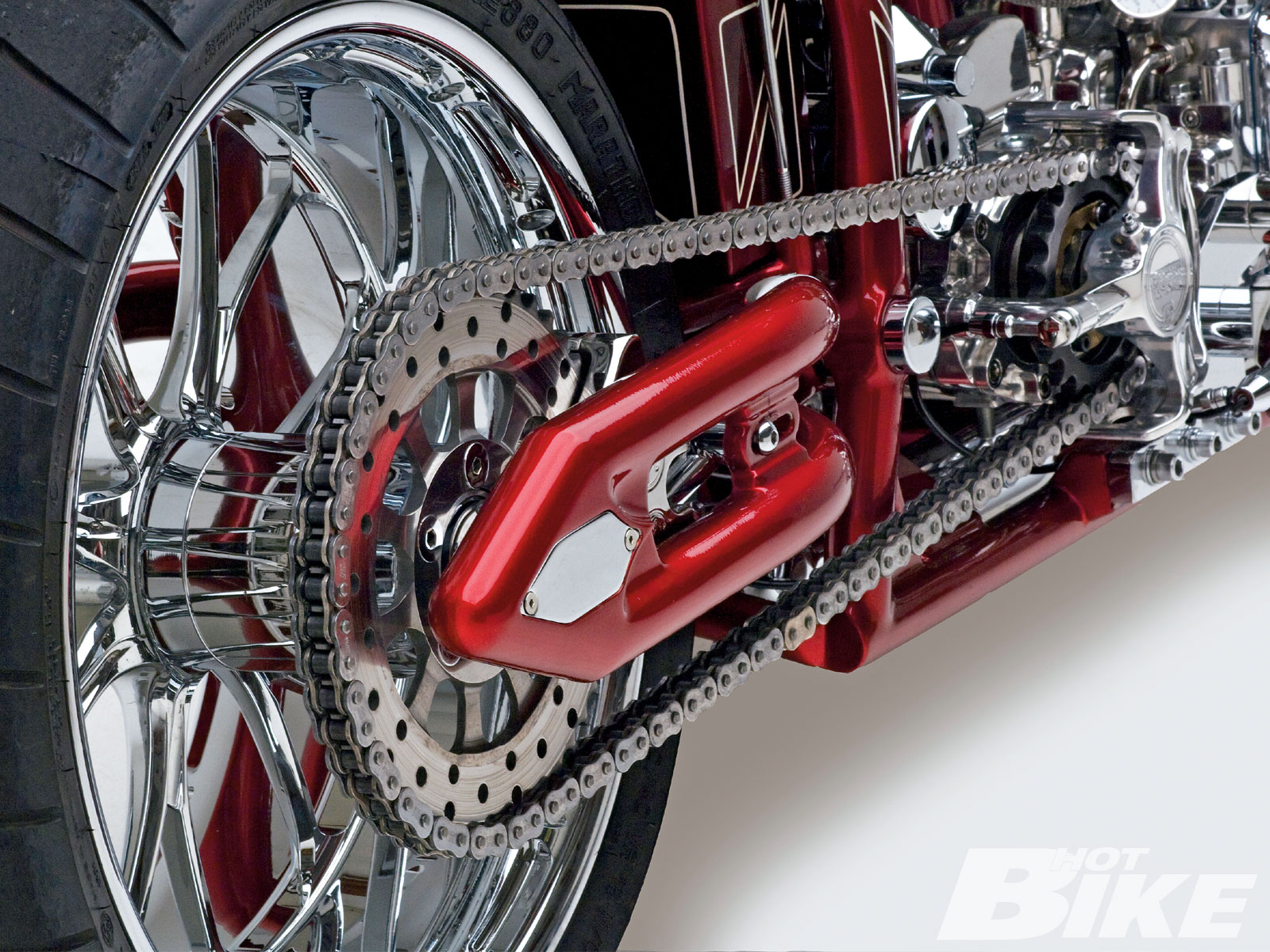 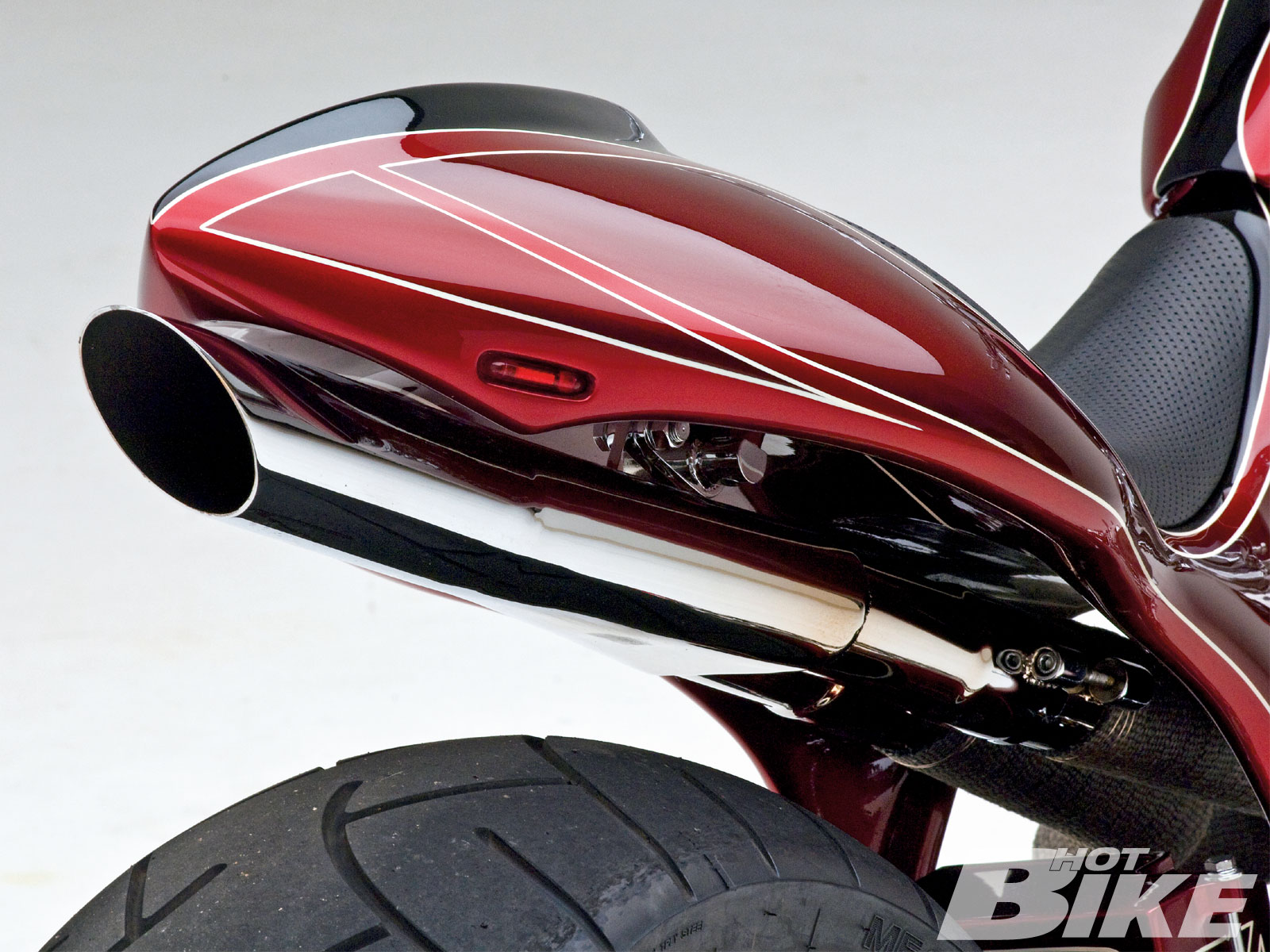 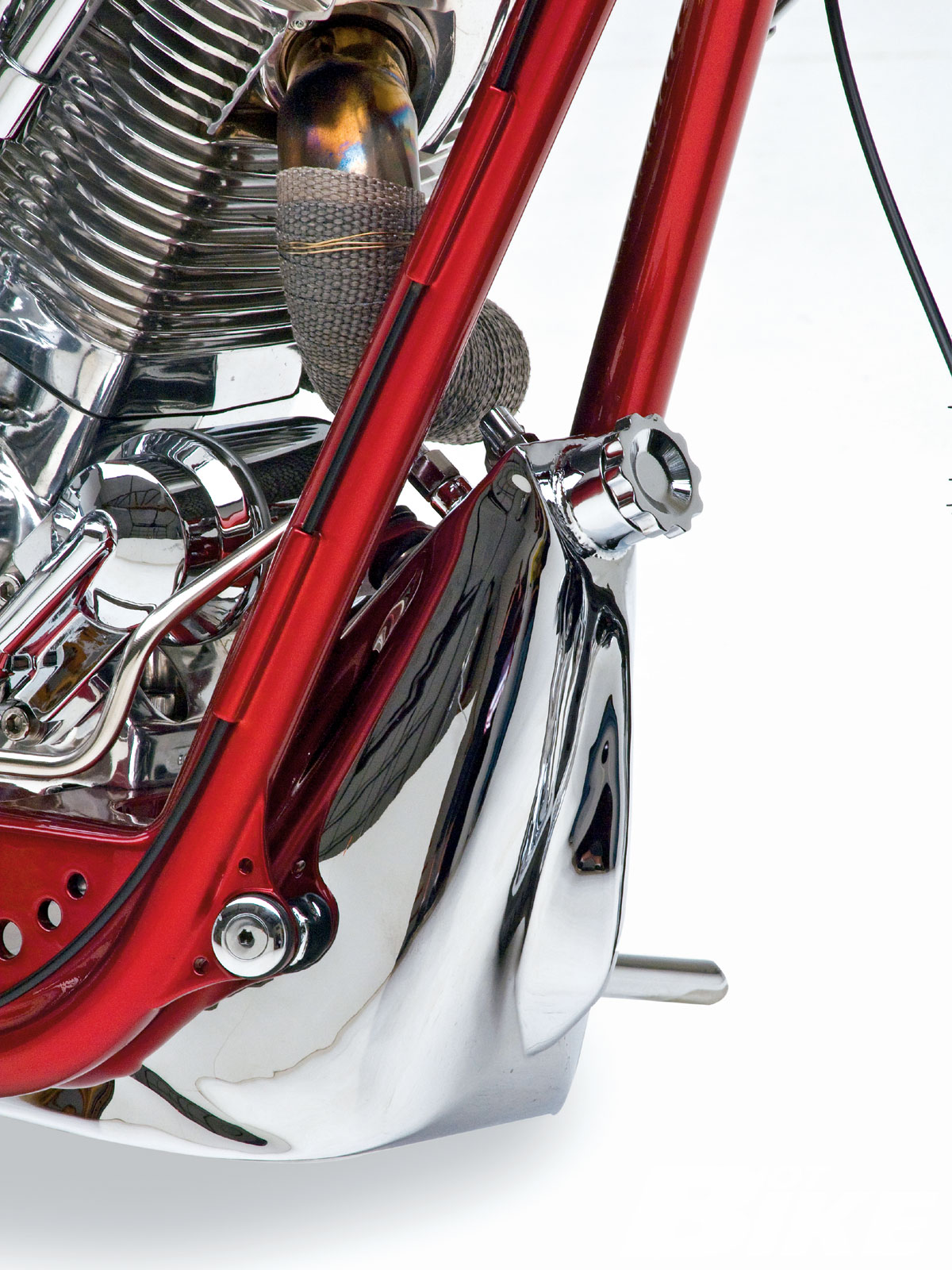 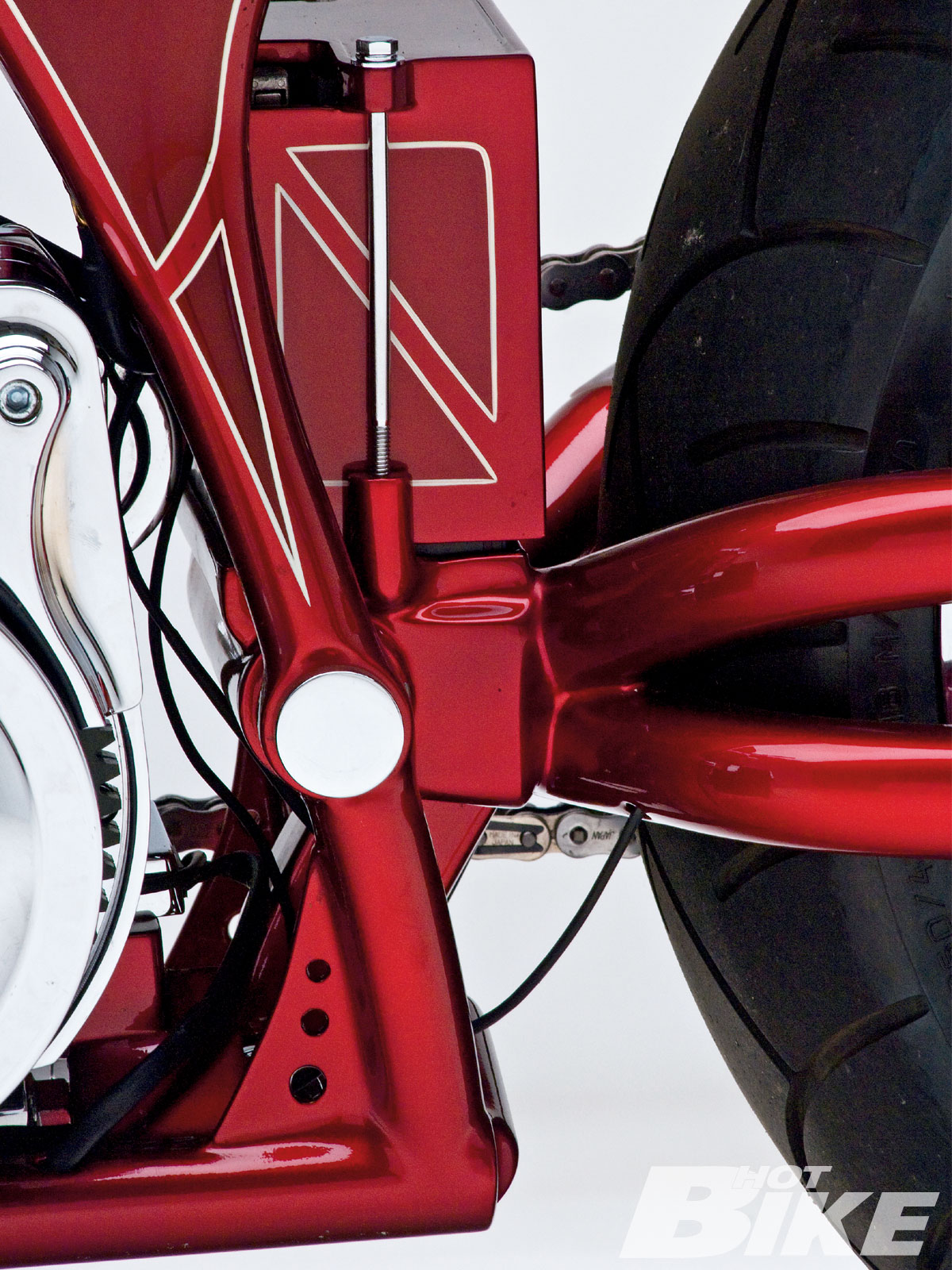 Dante radiused the underside of the tail section to run the exhaust high and tight and incorporated some tiny LED signals into the sides.

Dante DePaola has been into motorcycles since he was a little kid. He probably wouldn’t have been exposed to bikes if not for his uncles, Al and Angelo. When he was 8 years old his uncle Al gave him an XR80 and he was hooked. Al also introduced him to Ron Simms, who was a huge influence on Dante. Al and Angelo have been riding Harleys for more than 40 years, and it was Angelo who gave Dante his first ride on a Harley. As he got older Dante became obsessed with hotrods, since motorcycles were too expensive. He would spend a little bit on an old car, maybe a Nova or something with a ton of power but cheap, and spend his time getting it running and tuning it, and then take it to the track. Ever since he could remember he had an itch to work with metal and mess around with engines. It came naturally for him.

When it came time for college in 1991, he went off to UC Berkeley to play football and ended up with a degree in biology and a ticket into the NFL, playing for the Baltimore Ravens. He then went on to play in the European Football League, and when it was all over he settled back in his hometown of Santa Rosa, California, to figure out what to do next. It’s not easy matriculating from such a high-profile life into civilian life, but Dante was no stranger to adversity. He called up Ron in Oakland to see if he had any ideas for him. It turns out that Ron was getting ready to open Simm’s Beverly Hills and needed some help. Dante jumped at the chance.

Dante commuted to Oakland every day from Santa Rosa and learned the business back to front. Working on motorcycles replaced playing ball for him. After a couple years with Ron, Dante decided his obsession with motorcycles should be pursued in his free time; it was something he enjoyed too much to be his job. And really he just enjoyed doing his own thing with it. He created and fabricated his own designs. Dante went back to school for his teaching credentials and went on to follow his other passion, working with kids. He is now a biology teacher.

Dante met Mike Hodgin in Santa Rosa six years ago, a friend of a friend. Mike had a Deuce that he’d bolted some stuff onto, and was pretty impressed after seeing some of the things Dante was working on. The two became good friends and eventually Dante did a bagger for Mike that was featured in the July 2009 issue of Hot Bike Baggers.

Mike approached him again and wanted something more of a hotrod, a build perfect for Dante. For this bike he decided to pull out all the stops and get back to his roots. Everything Dante does is a product of his many influences, and this bike is no exception. Of course when he sat down to plan out the bike, he wanted to top anything he’d previously done. This bike is a conglomeration of the Cali hotrod and drag scenes, metric intricacies and engineering, and the rawness of American motorcycles. “Some people might not like it ’cause of the differences-that’s what is cool about it. This bike’s got a stretch-drag vibe with a nimble café style,” said Dante.

Dante started out by drawing the chassis and sending it to his buddy Anthony Keeling at Chassis Design Co., to build, minus the tail section and the bars, which Dante did himself. Dante has 2 acres with a house and a 1,500-square-foot shop with all the toys, even a mill and lathe-obviously this is a little more than a hobby for him.

Dante did all rest of the fabrication himself, always the most challenging part of a build. The engineering involved to get everything to fit perfectly and look right in a one-off machine is the hardest part. He spent a ton of time making it look clean but still rideable. He believes that is the most important part. What’s the point of having a cool-looking bike if it’s not rideable?

For power he went with a 127ci Evo motor from Ultima and a Baker six-speed tranny. The front suspension is off a Suzuki with triple trees from LA County Choprods. One of the coolest parts of the bike is the tail section that showcases his respect and love for metric bikes. Overall the bike just looks like it could be thrown onto a drag strip or taken into the hills for some serious cornering.

Right now Dante is working on another crazy bagger for a guy, but he doesn’t just give his number out to anyone, it’s still just a hobby. More like an all-consuming passion.

Much like the design philosophy behind Indian Motorcycle’s family of production bikes, the design and engineering teams built the FTR750 […]