It happened again to us this year. You go into the Sturgis Rally with the best-laid plans; people to see, things to do, rides to take, and seemingly all the time in the world to check everything off your list. Then the whirlwind spins up, and bike shows blend into industry parties, concerts are stacked onto races, old friends mix with new, and you do the two-footed biker boogie down Lazelle Street for the umpteenth time… And next thing you know you’re packing up for the ride home with only a few items finished. Sometimes you just have to roll with the flow; each year Sturgis is a little different, which is what makes the biker blowout in the Black Hills so special.

Statistically, the South Dakota Department of Transportation reported that traffic at the 2018 rally was up 7.9 percent overall, with a 10-day vehicle count of 505,969, compared to 469,103 in 2017 (the numbers are compiled from traffic counters at nine locations entering Sturgis). But based on my purely subjective seat-of-the-pants observations (I’ve been to the last 10 rallies), it didn’t feel like attendance was near half a million. Negotiating the usual Lazelle/Main Street madness was for the most part fuss-free, and getting in and out of the Buffalo Chip was never an issue—and for me, those are two truly real-world barometers of attendance.

One statistic where we hate to see greater numbers is in the motorcycle fatality count. According to an article in the Rapid City Journal, four people headed to the Black Hills looking for a good time won’t be returning home to their loved ones. This total is slightly skewed because the number only includes incidents within western South Dakota from the first Saturday of the rally to the final Sunday. If you include other motorcyclists outside that region known to have been riding to or from the rally, the tally climbs to nine. This included several cases of riders failing to negotiate curves, and vehicles turning in front of riders. It’s always sad to see these statistics, especially when some of those accidents could have been avoided. 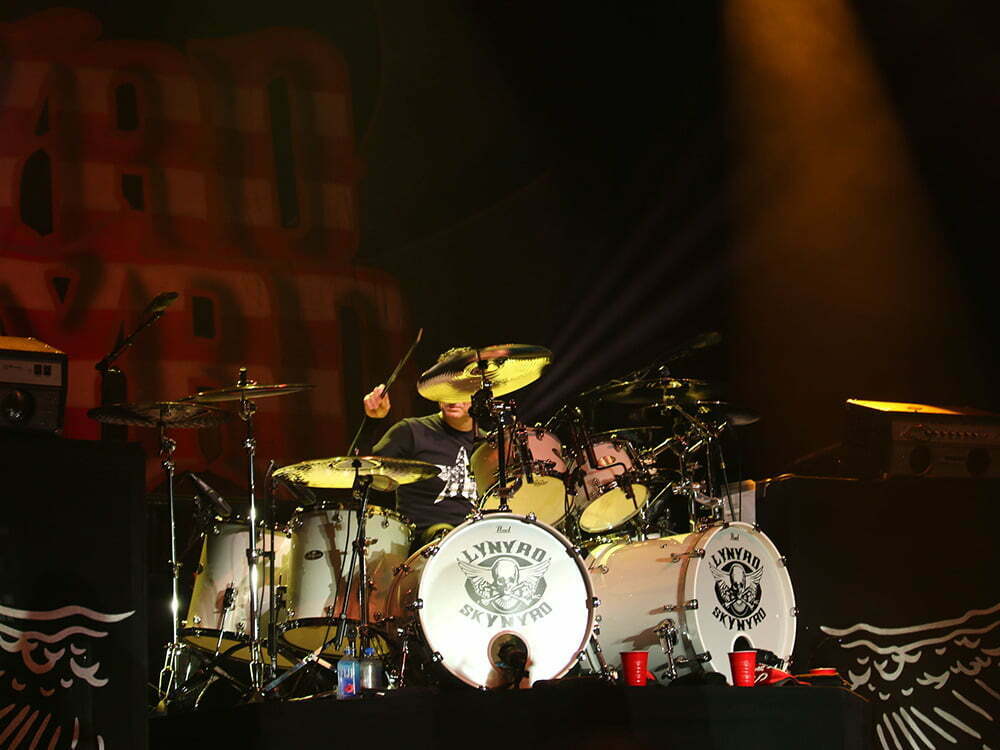 Thousands of fans packed the Chip to see legendary Southern rockers Lynyrd Skynyrd performing in Sturgis for the last time.

On a lighter note, where else but Sturgis would you see Sarah Palin rockin’ out to Lynyrd Skynyrd, and Trump and Kim Jong-un getting their party on, all in one night? While the Donald and Kim were just two guys in masks spreading lighthearted fun at the back of the Buffalo Chip, Palin was the real deal. The former governor of Alaska came out to support the Legends Ride, a fundraiser that benefits organizations like the Black Hills Special Olympics and the Sturgis Motorcycle Museum & Hall of Fame. Later that night Palin and her husband Todd, an avid motorcyclist, were cutting loose at the Skynyrd concert along with thousands of fans of the legendary Southern rockers, who were performing in Sturgis for the very last time. 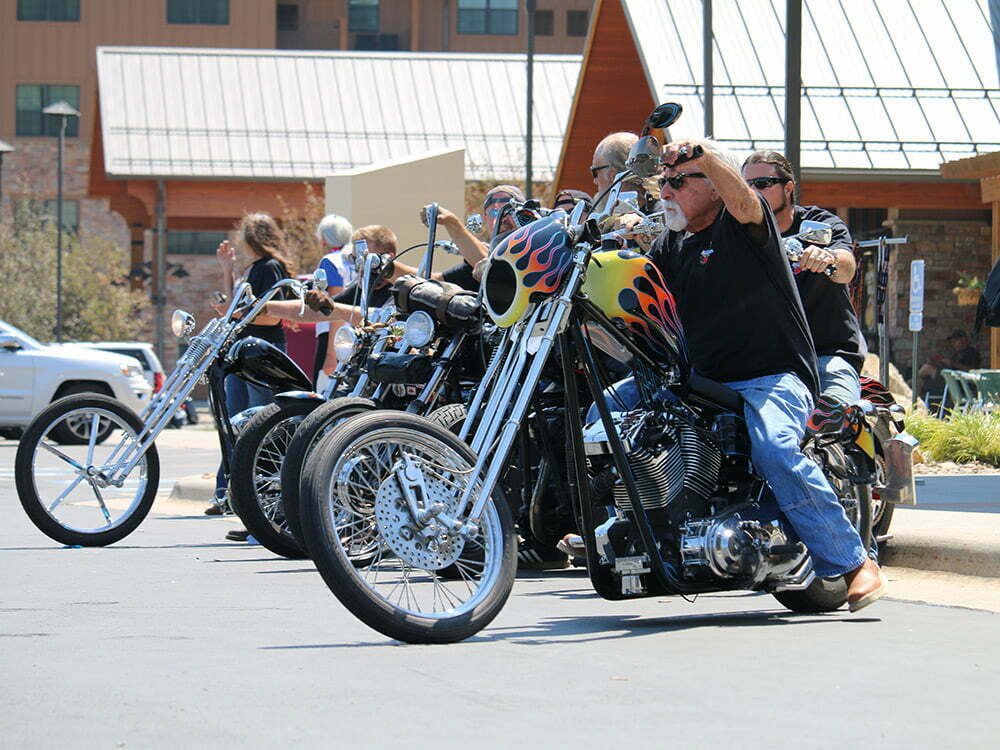 While it wasn’t a record-setting year attendance-wise, there were some other record-breaking moments. A bidding war broke out at the Legends Ride auction for the bike the Buffalo Chip had Paul Jr. Designs build for it. Jess and Heather Slaughter of Big Spring, Texas, emerged victorious with a winning bid of $105,000, easily the highest total ever raised by the annual Buffalo Chip bike auction for its fundraising event. The Sturgis Motorcycle Museum & Hall of Fame induction ceremony also saw a record turnout, as approximately 900 people filled the Pine Crest Ballroom of the Lodge at Deadwood. The ballroom was a sea of yellow as the Hamsters USA were among this year’s inductees into the Hall, and they were a big reason for the huge crowd. It was rarefied atmosphere, one where chopper legends Sugar Bear and Hall of Fame inductee Mondo Porras shared a table with the venerable Willie G. and Nancy Davidson.

Crazy John’s Street Drag Invitational was sheer run-what-ya-brung mayhem in the middle of the Buffalo Chip.

The Sturgis Rally is rooted in racing, and at no place was this celebrated more than at the Buffalo Chip. Action kicked off with a memorable battle between the best flat-track racers in the world during the Buffalo Chip TT. Crazy John’s Street Drag Invitational channeled the spirit of run-what-ya-brung drag races of yore at City Park as baggers, Dynas, high-powered Harleys, and even a lightning-quick Buell blasted down the strip in the middle of the Chip’s amphitheater. Sketchiness ruled as back ends wiggled like fish on a line, with fearless riders launching down the narrow patch of pavement. At the same time, the Super Hooligans were kicking up a dust storm on a track hacked out of the other section of the Chip’s amphitheater, with riders gathered to compete in the sixth round of the RSD Super Hooligan National Championship Races. 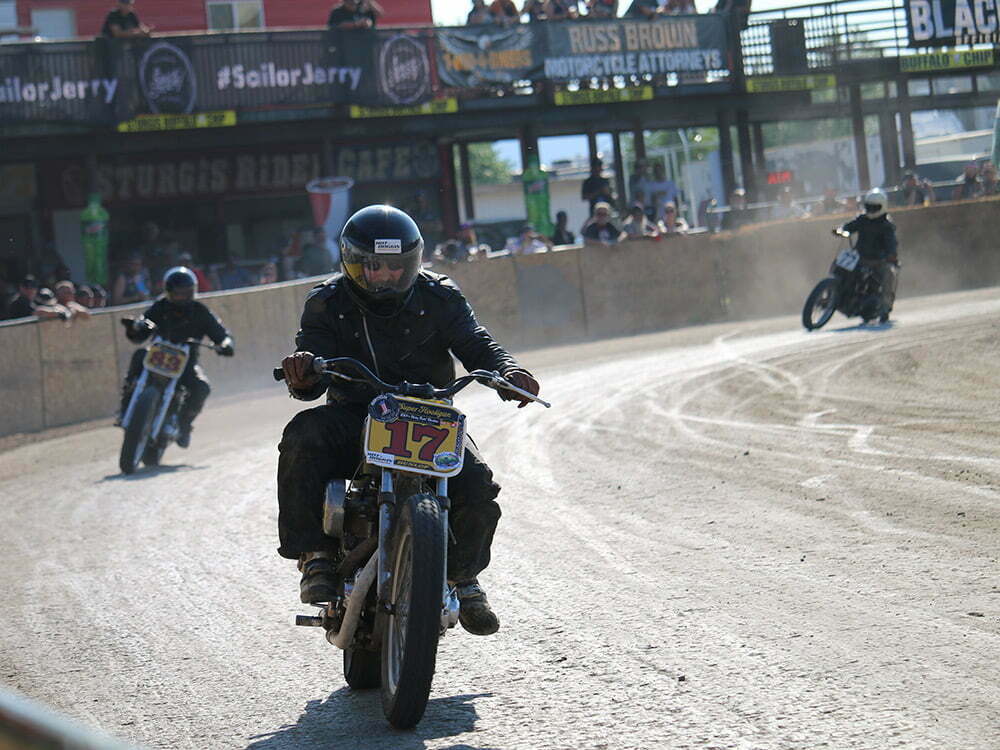 Big bikes battling on loose dirt is a sight to see, and riders were bucking on their bikes like bronco-busting cowboys in the appropriately named Moto Stampede. It was quite the day for series leader Andy DiBrino, who won both the Dash for Cash and the main event. This was no small feat considering DiBrino had to fend off former AMA Pro Grand National Champion Joe Kopp for the victory. “Superfly” Frankie Garcia rounded out the podium on his Ducati Scrambler. And no sooner had the dust settled from the races than Reverend Horton Heat took to the main stage to lay down some red-hot psychobilly for even more madness. 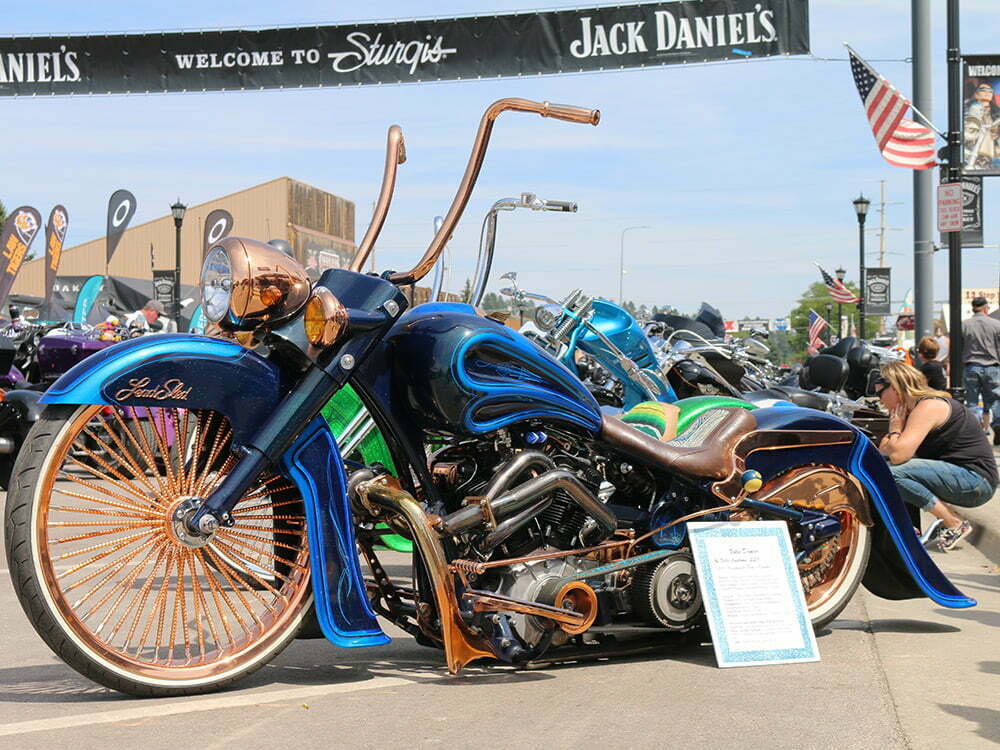 There seemed to be a bike show on every corner in Sturgis—or even in the middle of Main Street.

Seems like everywhere you turned there was a bike show, from the Harley-Davidson FXR 2018 Show to the Sportster Showdown put on by Pat Patterson and Led Sled Customs. Bikes entered in the Showdown reflected the versatility of Harley’s Sportster, with awards presented for Best Tracker, Bobber, Café, Vintage, Stock, and Chopper. The Best of Sturgis award went to a tidy blacked-out hardtail with a high-necked frame and springer front end. A free hog roast capped off an event that’s quickly growing in popularity on the Sturgis scene. The Rat’s Hole is one of the longest-standing bike shows at the Sturgis Rally, and the 30th anniversary show didn’t disappoint. From a blown “American Badass” bagger to a hubless wonder with a JIMS 120 race engine, the range of customs competing for the Big Daddy Rat trophy ran the gamut. A full report on the 2018 Rat’s Hole Custom Bike Show is coming soon. 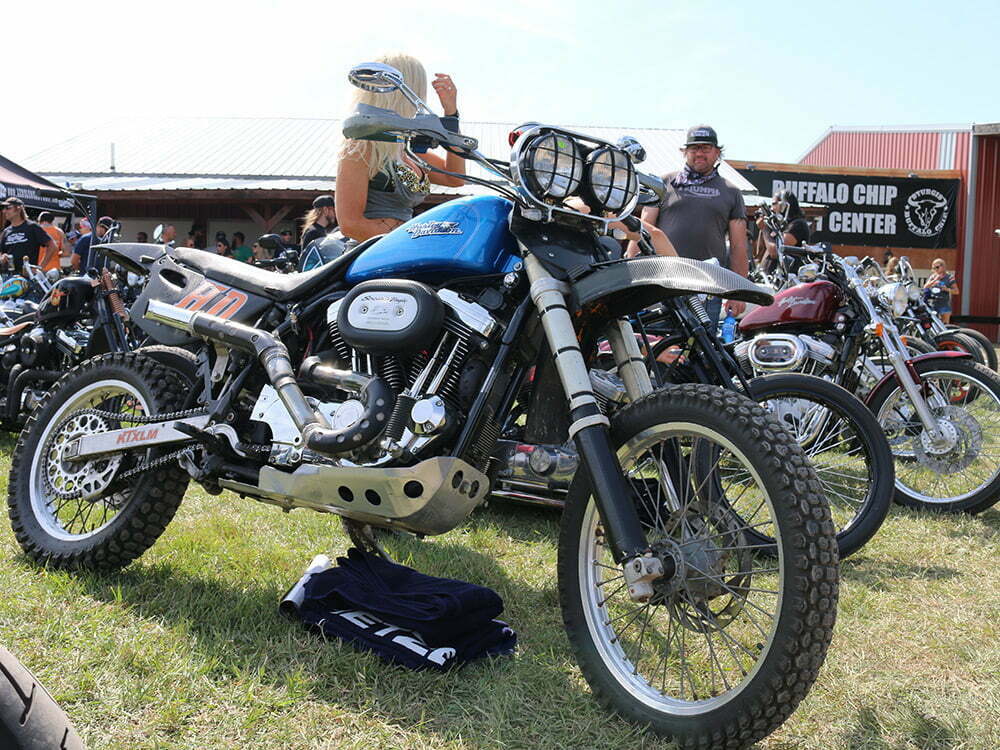 Other newsworthy tidbits from Sturgis 2018 included witnessing a packed house at Michael Ballard’s Full Throttle Saloon when we swung by—even though it was midafternoon. Echoing the same vibe as the original Full Throttle, the newer main building also brings an edgy, industrial decor, albeit a bit more upscale than the seedy, down-and-dirty digs of the old bar. The vintage motel signs behind it bear the scars of the fire that burned down the original location, but they also add familiarity to the Full Throttle atmosphere, and the adjacent Pappy Hoel Campground is a huge improvement over the old location. Ballard also just moved the iconic bridge over to the new compound, so he’s slowly but surely reestablishing the FTS empire. 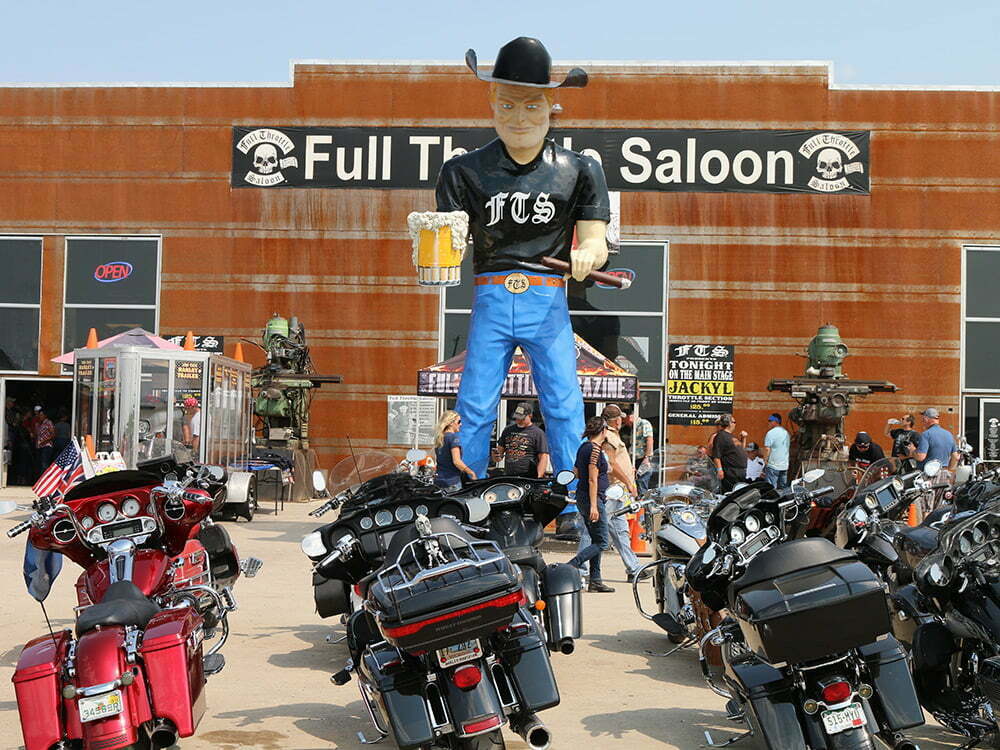 Michael Ballard’s Full Throttle Saloon was on the gas at this year’s Sturgis Rally.

Speaking of the old Full Throttle site, a new enterprise called the Steel Pony Campground has set up shop there. It’s still in its infancy so the facilities are fairly basic, but it will be interesting to see how it develops in the highly contested campground arena east of Sturgis. In town, the Sturgis Motorcycle Museum & Hall of Fame celebrated its expansion with a meet-and-greet of its 2018 Hall of Fame inductees, featuring legends like Jack Hoel and Fred Fox. Industry parties and other bike shows at the location throughout the week added to the spectacle. The building’s new addition is spacious and modern and gives the museum much-needed room for more motorcycles. And everybody needs more motorcycles, right? 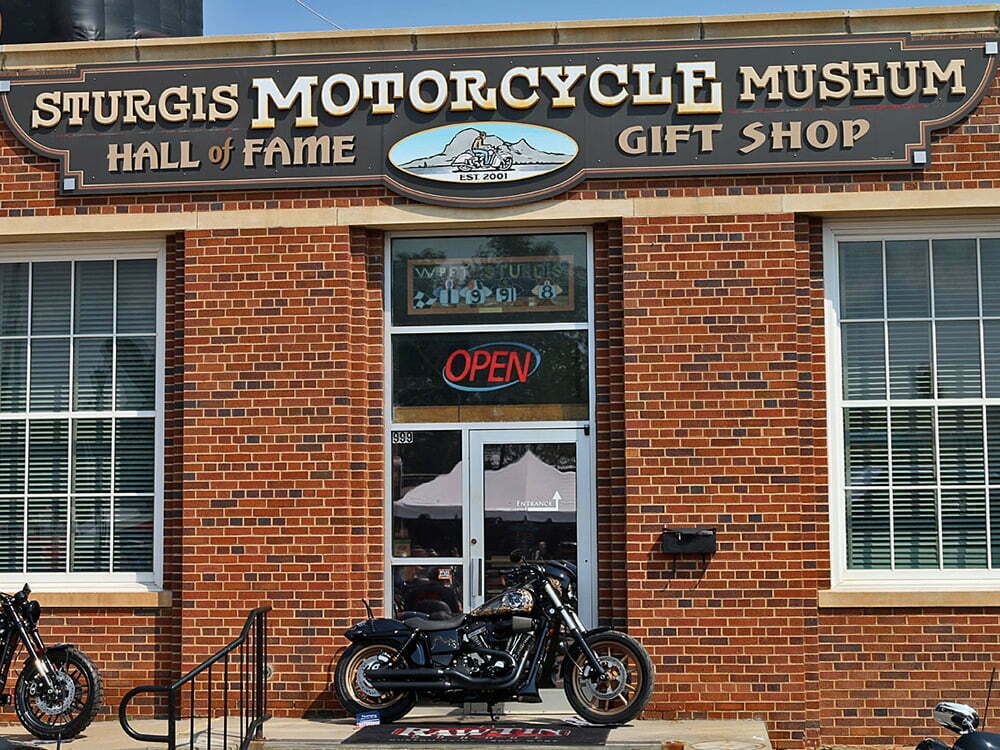 With its expansion complete, the Sturgis Motorcycle Museum & Hall of Fame is bigger and better than ever.

While the 2018 Sturgis Rally is in the books, we’re already planning for 2019. Maybe we’ll get to the other half of our 2018 list. Or maybe we’ll just go with the flow. Either way, see ya early next August in the Black Hills! 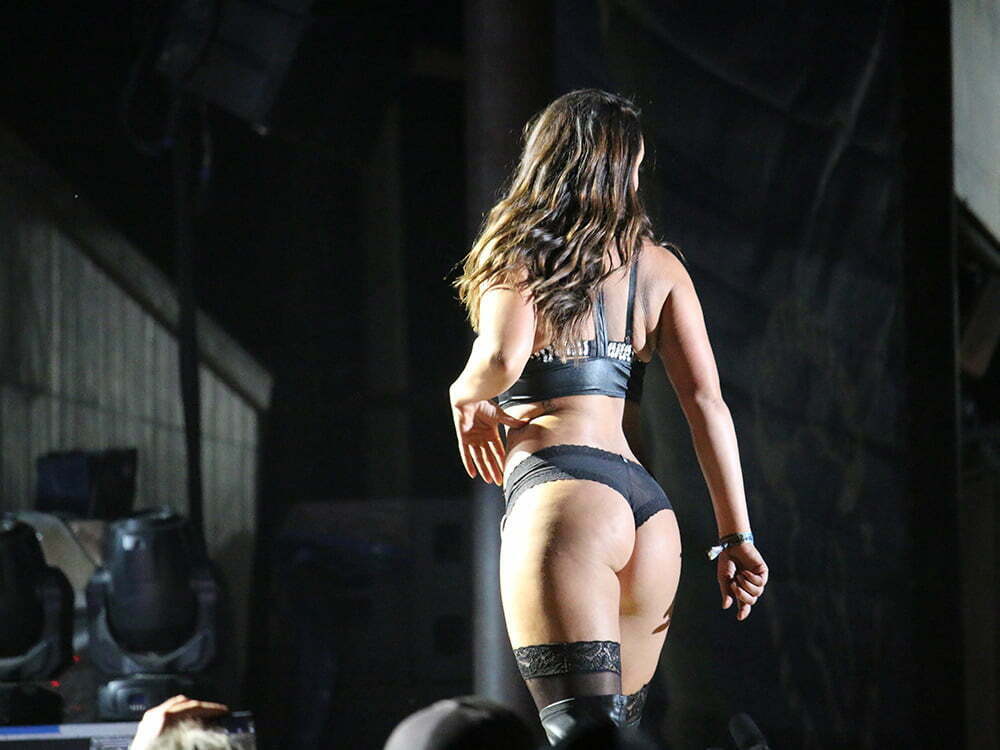 What’s Sturgis without a little healthy competition? A contestant in the Miss Buffalo Chip contest.

Every Sturgis Rally has different levels of weirdness, which is what makes the biker blowout in the Black Hills so special.

Harleys Of The 2018 Handbuilt Motorcycle Show

For the last five years, some of the most skilled bike builders in the country have gravitated to Austin for […]

The Sturgis Rally, ’99 Fat Boy, And More News – The Editor