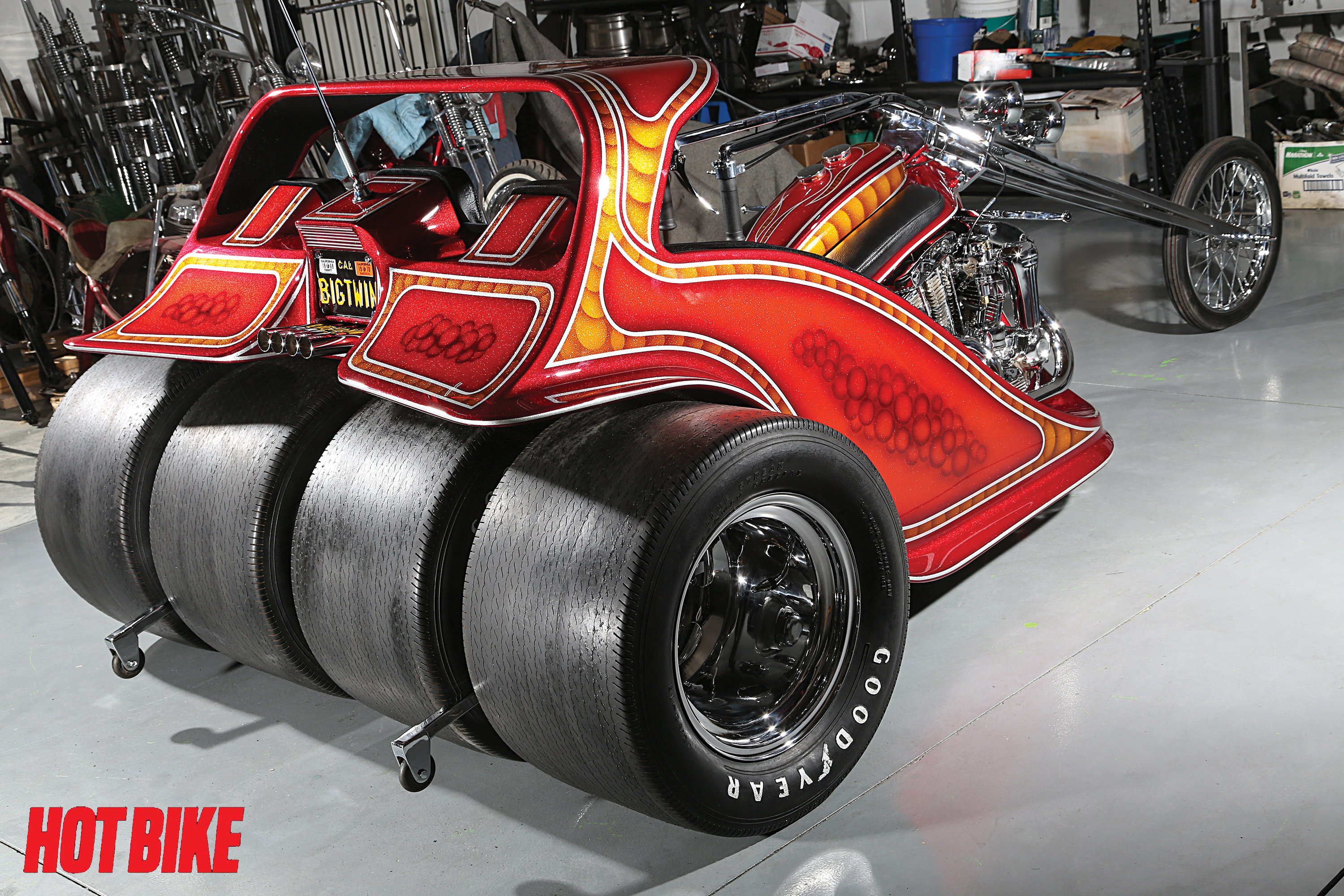 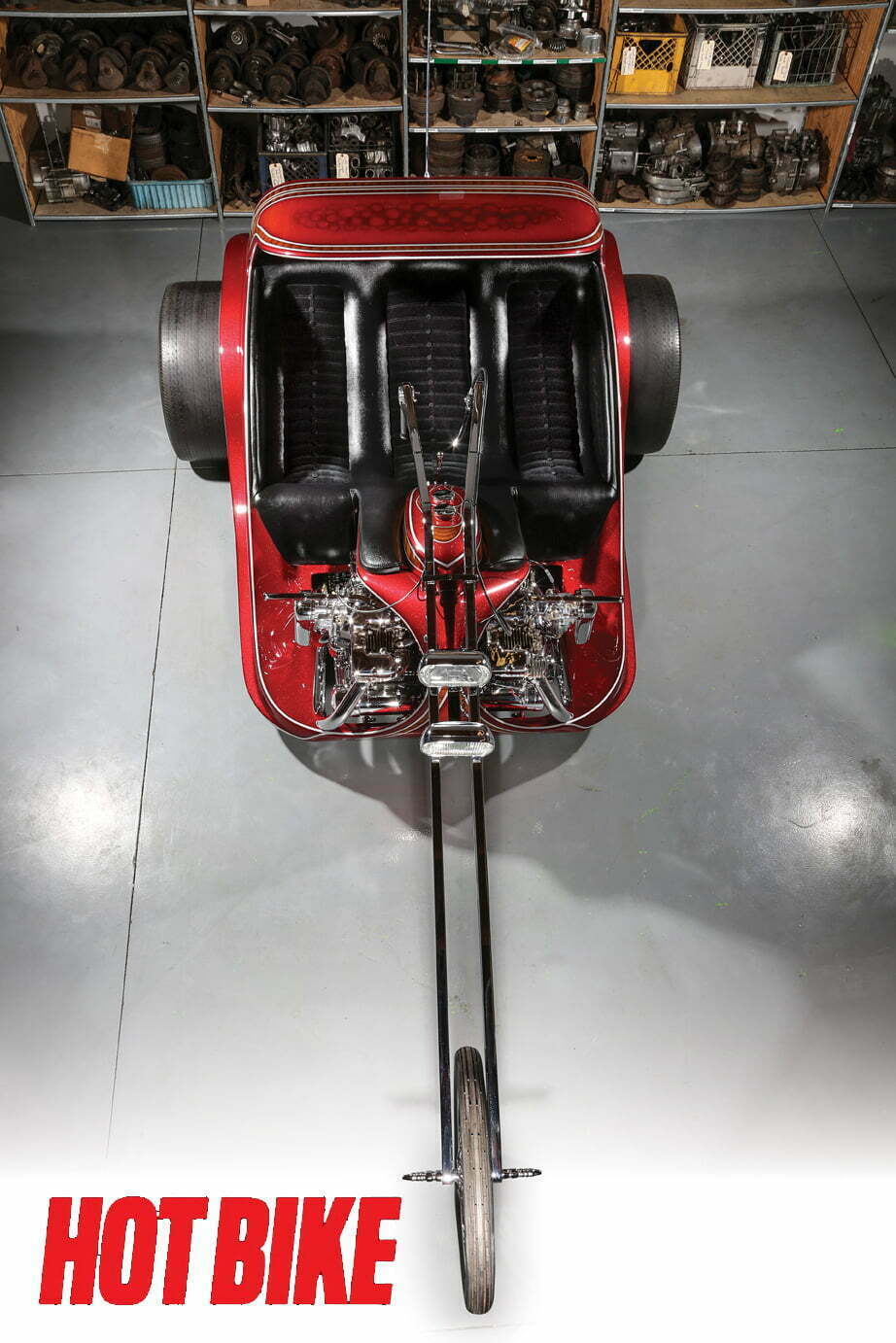 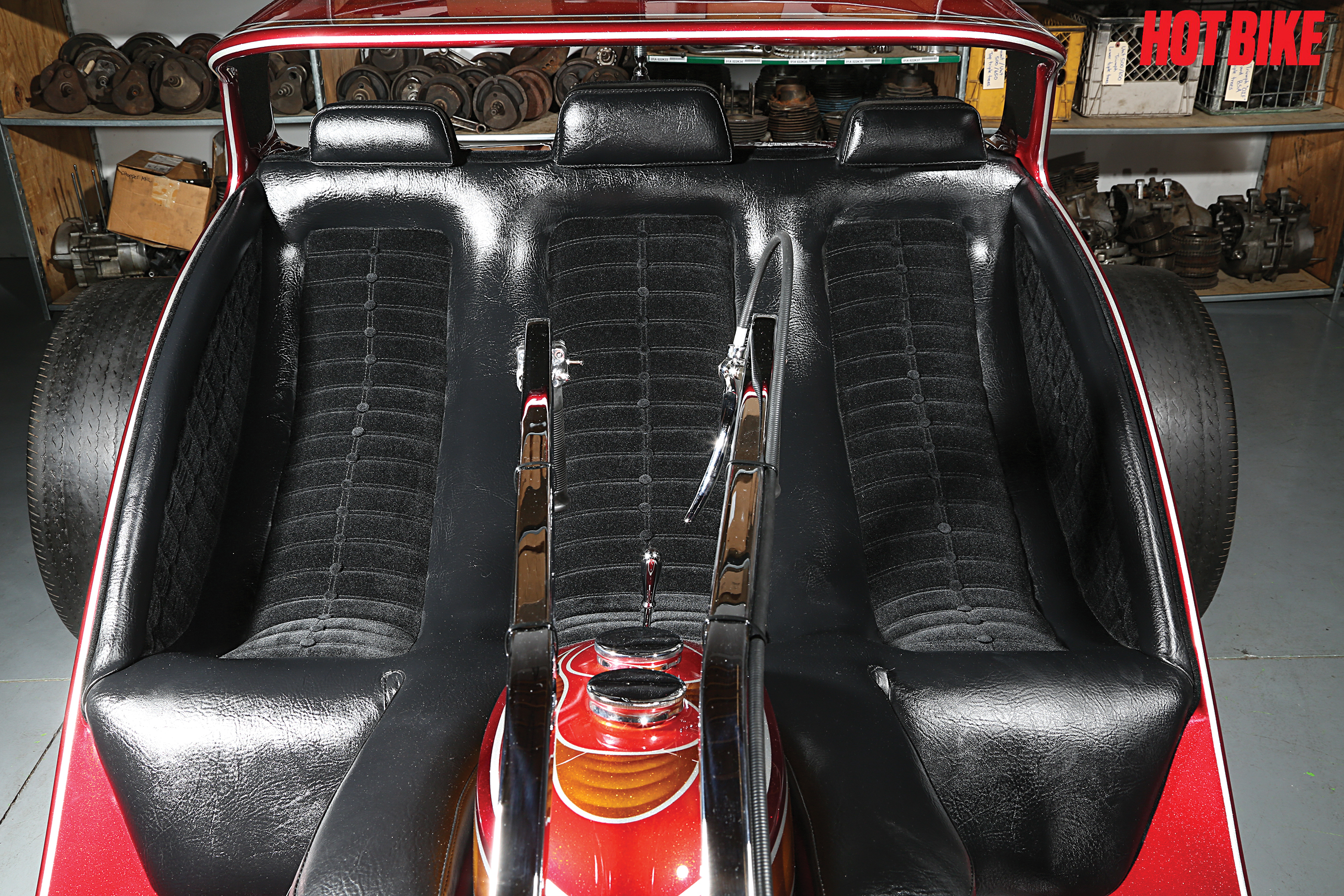 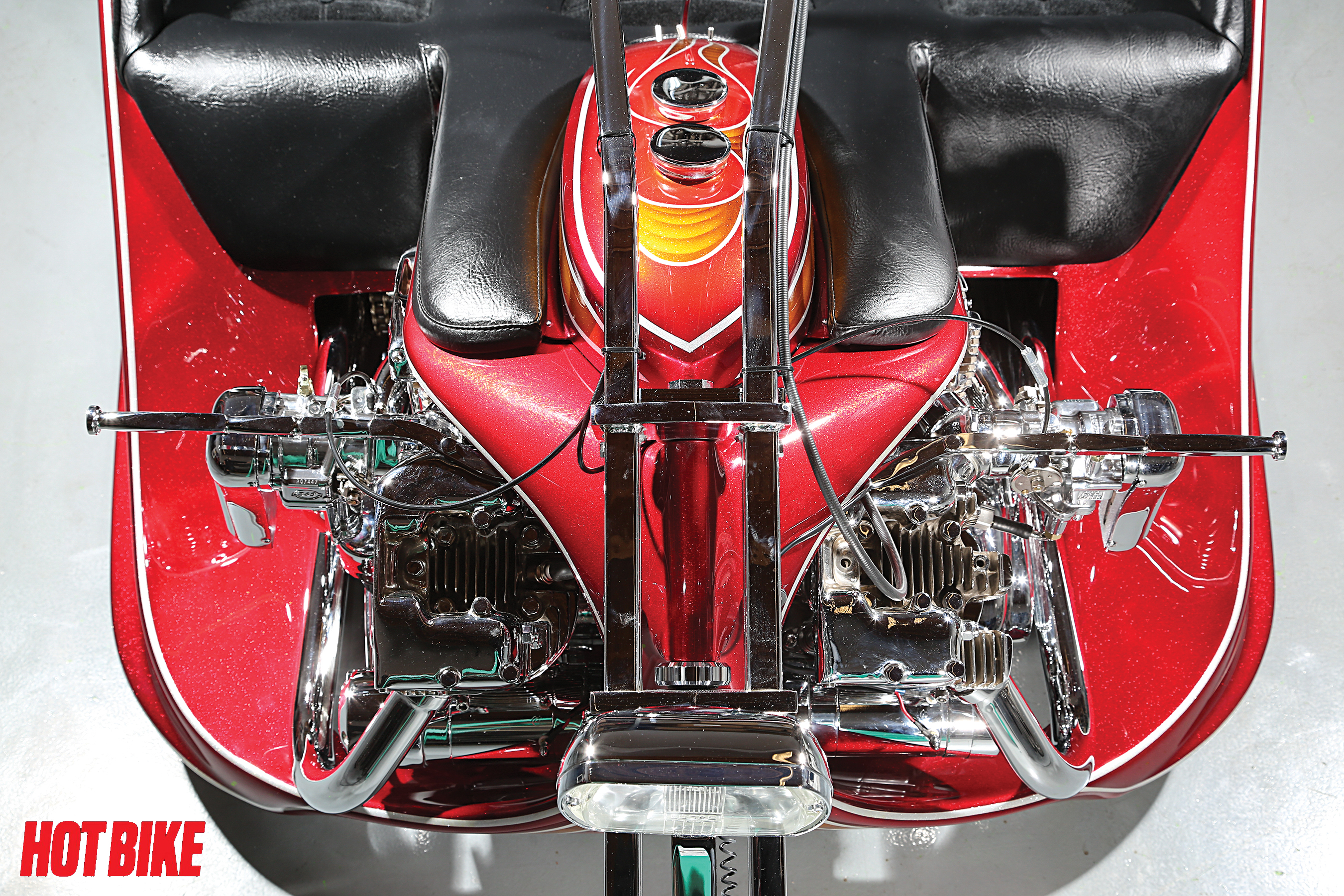 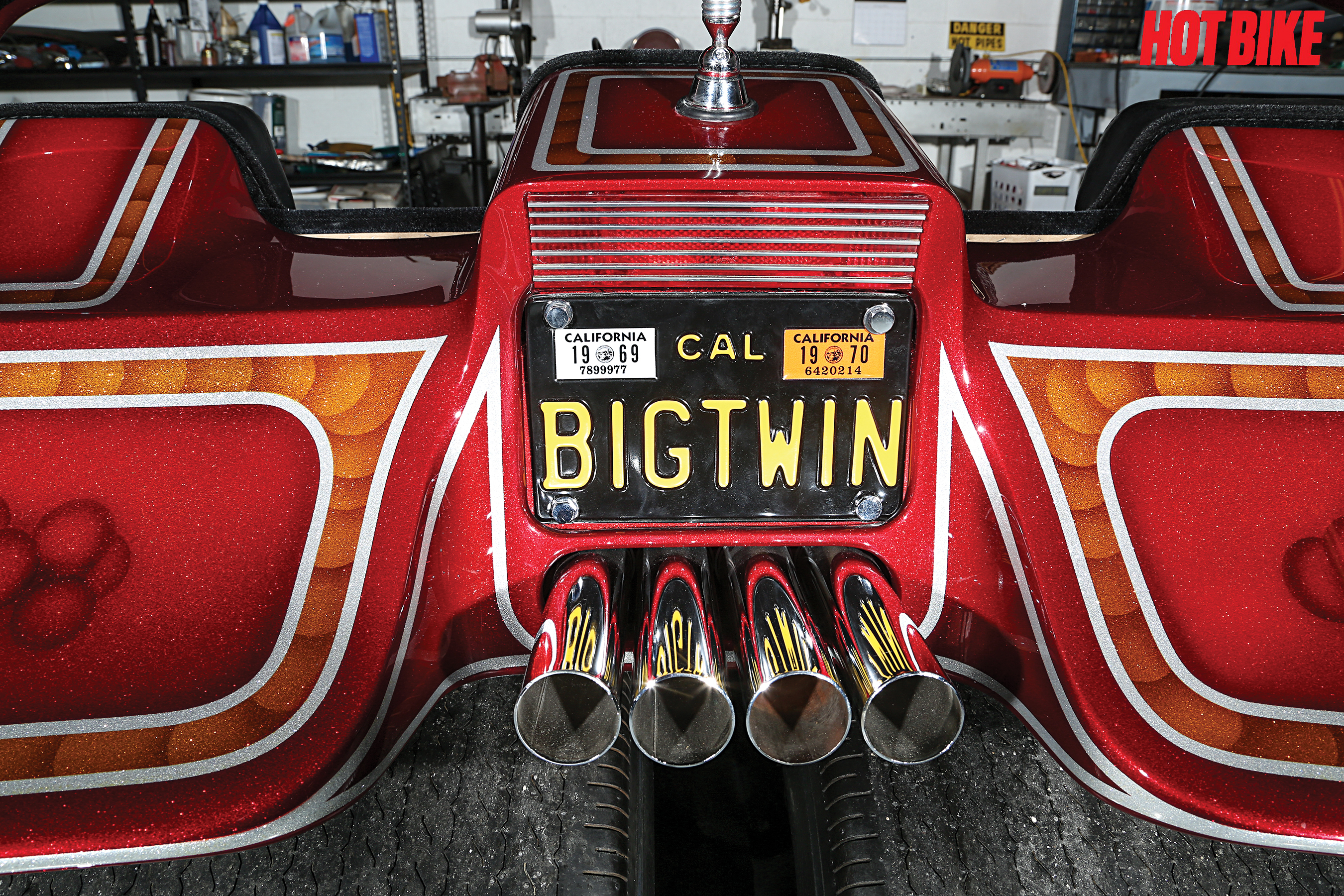 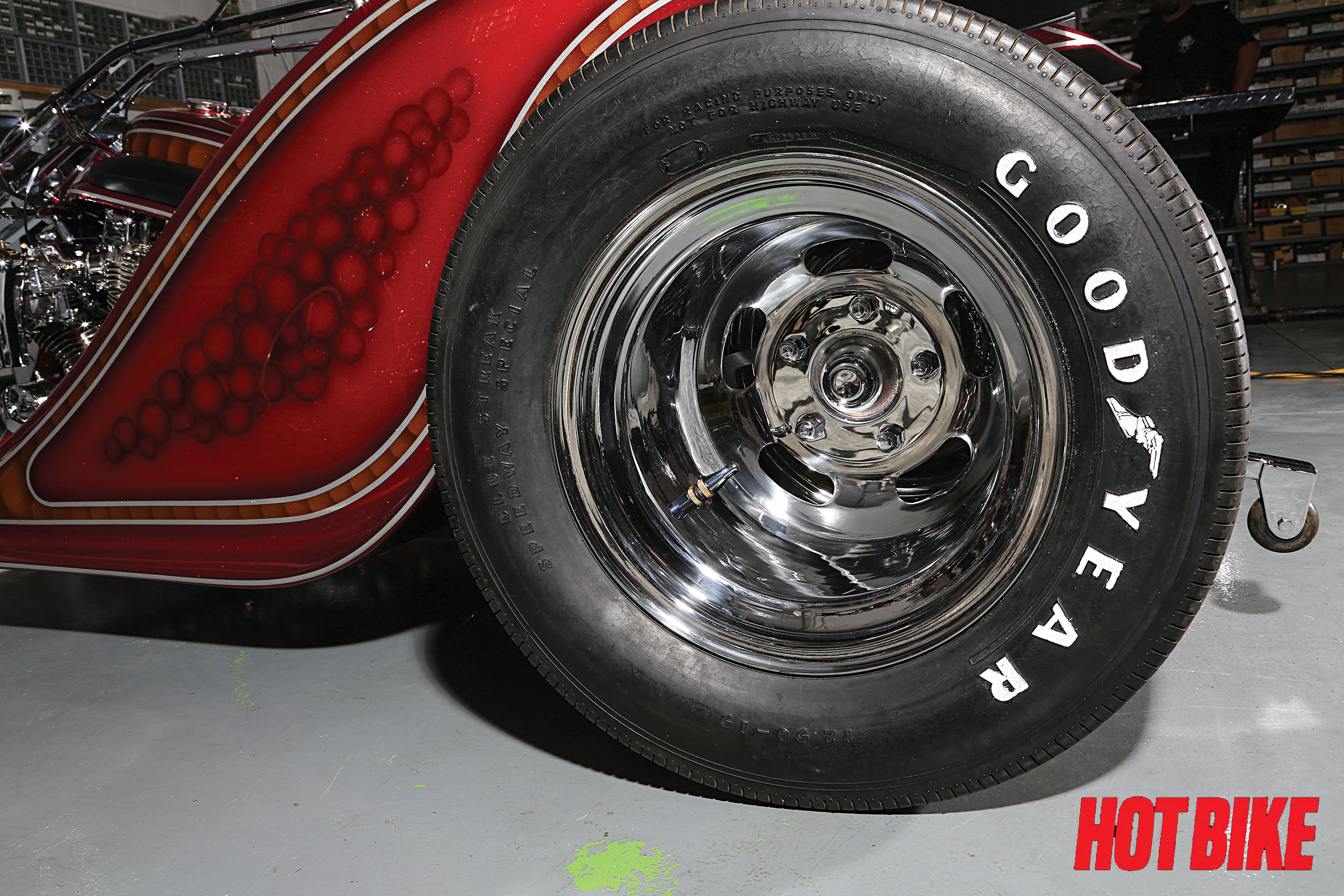 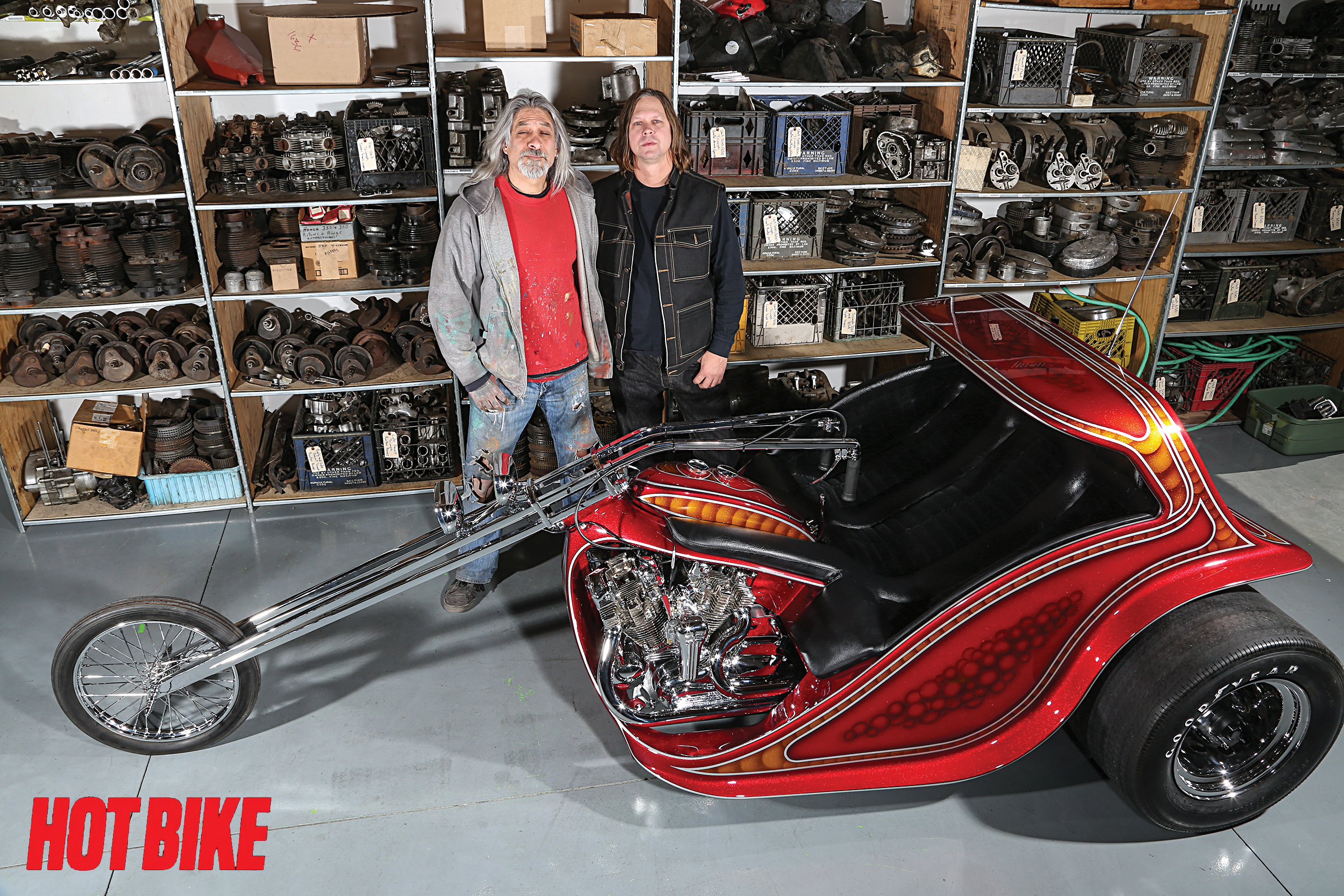 If you own the earliest copies of Street Chopper, you know the Big Twin trike was one of its earliest and greatest stars. The trike was a downright celebrity in our early days. Like many stars, though, it faded as its glory dimmed. Luckily, in this case we didn’t have to endure the obligatory appearances on Hollywood Squares that come with celebrity burnout. Big Twin shined brightly then just vanished. For decades, no one knew where it went. There were rumors, sure, and—much like another star’s fall on a toilet in Graceland—a few post-mortem sightings.

In 2011, Big Twin made its first gen-you-wine public appearance in decades. Not on a stage, not at a show, and, thankfully, not on . Over the past three years, Paul Ponkow at Bones Legacy in Las Vegas has been restoring the old girl to her former glory. For those of you who don’t know the Big Twin saga, here’s a brief primer and Paul’s tale of bringing her back to glory.

A Star is Born

In late 1969, Tom McMullen and the crew at a new magazine called Street Chopper needed a follow-up project to their Corvair Trike’s big win at the Grand National Roadster Show earlier that year. Ed “Newt” Newton drew and designed a lot of crazy hot rods for Ed “Big Daddy” Roth at that time. He’d drawn some preliminary sketches of a trike, and it was from these that Dave Brackett, the chief designer for Tom’s AEE Choppers, created the final sketches for Big Twin.

At its heart, Big Twin was a five-wheeled trike centered around two brand-new side-by-side Sportster motors. Power went out to the four rear wheels via an automatic transmission, and the plans called for a full body with a roof over the cockpit. Tom gave Dave’s sketches the nod, and it was off to the races to forge a dream into reality.

Dave gathered parts and materials. The motors, a Servi-car backside, and a Ford C4 automatic tranny formed the foundation. Add in the necessary frame tubing and Dave got started.

He built the whole thing and had her painted in a mere 32 days, which is good because that’s how long he had until the 1970 Grand National Roadster Show. Time was so tight that Dave had to build Big Twin’s turntable as the trike was being loaded on the trailer for the show.

Big Twin’s debut brought the house down. She was a huge success, winning the grand sweepstakes award for AEE that year. Within a year, though, she was already showing signs of stress. The paint began to blister, and the weight of the two motors bent the springer fork. AEE repainted the trike in purple, green, and yellow instead of the original red, silver, and gold. Up front, a girder front end replaced the springer.

Over the next year or so Big Twin was a huge star for AEE. When she wasn’t performing at trade shows or greeting customers in the showroom, she was appearing at shop functions.

That was the beginning of the end.

If you want longevity in the entertainment business, you have to stay relevant. If you don’t keep up with time’s steady march, you fall into history. Don and a buddy knew that. By 1980 or ’81, they decided Big Twin needed to change her act to draw in the fans. Paul contacted Dave about doing just that. This was the last he heard about Big Twin for roughly 25 years.

Which may be just as well. Don was pretty abusive of his star attraction. According to Paul of Bones Legacy, who would eventually save Big Twin, Don took the trike to a bike shop back then for the modifications he wanted. Later the shop owners recalled that Don had the wonderful habit of taking perfectly nice things and ripping them apart. He also wanted to make Big Twin more of a show bike.

Big Twin was torn down and butchered, the frame was cut up, and they tried to put a blower in it. Moreover, the pipes were MIA, they swapped in a different front end, and, well, you get the idea. Either Don didn’t want to pay for the job or the workmanship was shoddy. It languished in agony for more than a decade.

Around 1991 Big Twin was sold to Jerry Whitley for some gun deal. The once great star of the custom bike circuit was now being passed around like contraband. She was still a train wreck. Jerry wanted to restore her but never got around to it. Big Twin sat that way for two decades. The world changed a lot during that time. One of its greater changes brought her out of retirement.

While Big Twin sat ignored and rotting, the Internet rose and took over the world. Users in chat rooms exchanged rumors about her fate over the years, trading conjecture back and forth about what the hell happened to her. No one knew for sure until the summer of 2011 when Big Twin appeared for sale on eBay.

The minimum bid was $5,000. Big Twin was so hagged out she didn’t receive a single offer. In December 2011, a private collector bought her, with plans for restoring her to her former glory and putting the trike on display at a motorcycle museum in Las Vegas.

Paul and his Bones Legacy Motorcycle Shop were hired for the job. They needed a forklift to remove it from the trailer. The tires were flat to where you couldn’t even push it. “What I remember from Big Twin in the late ’80s was I had some old baseball cards Street Chopper used to put out,” Paul says. “My partner Richie knew everything about Big Twin and its history. Quite frankly when I first saw this, I asked Richie, ‘Why did you buy this piece of crap? It’s beyond repairable.’ I also was intimidated to even try to restore this and thought I could never get this done. In my thoughts it was beyond my capabilities. I would need a team of people to help.”

In February 2012, Paul decided to actually start doing something. He removed the motors. The prognosis sucked. They needed to be re-chromed and rebuilt, especially up top. Luckily, the bottom end looked like brand new and maybe had less than 50 miles on it. Paul’s friend Bruce Jenson helped with the top end and assembly of the motors. Since Big Twin was really a back-burner project for the shop (they had several other builds going on and Bruce worked his full-time job), it might have been a little more than a year later before the motors were completed. Big Twin sat for another several months before they decided how they were going to repair everything else.

Part of that meant bringing Big Twin’s father into the mix. “Dave Brackett got ahold of me in early 2012 and really wanted to be part of the restoration,” Paul tells us. “He wanted to come down and help and be there 100 percent for technical support. He also wanted to buy the trike himself before we purchased it. So in October 2013 the best solution all around was to have Dave finish up the fab work as he originally built and designed it.” Paul shipped it as far northwest as you can go without leaving the continental US: Port Angeles, Washington.

Dave restored all the fab work back to original by the end of January 2014. At this point, she needed a painter. The first one didn’t work out, but the second was an expert whose work has been seen everywhere: Ryan Evans from Count’s Kustoms ( TV show). Ryan knew the history on Big Twin and was thrilled to be part of her return. He had a helluva task ahead of him. Recreating a paint job is one thing; doing it with only a couple of old pictures for reference amps up the difficulty exponentially. Ryan put in a lot of extra time in between shooting TV episodes to get it done. Paul says, “We were amazed at how perfect the paint came out. There was no doubt he was the right man for the job.”
Paul got Big Twin back from paint around Thanksgiving. Crunch time was on; he knew we wanted to have it ready by January for our next issue. There was still more stuff that needed to be fabbed and chromed. “Alan and I had to finish fixing the handlebars, the pipes didn’t fit properly, and two of them had to be re-made,” Paul says. “Cables had to be made. I’d like to give thanks to Dan [Franz] and Grubb for finishing the final work in one day just three days before the photo shoot. This was like working on a bike, trike, and car all in one.”

One of the most challenging and scariest things was putting in the motors without scratching the paint: “Thank god Steve Koso from Burbank Motors was up on holiday, and the beast man helped us put in the motors with six people altogether without a scratch.”

“I really thought I was not going to be able to finish Big Twin or it would take many more years,” Paul admits. “I want to thank everybody who was involved, as everybody did their part. It was a team effort, and without any of them this would have not came to fruition. Personally, my father really wanted to see this done more than any other thing I’ve built. As he says, ‘Before he kicks the bucket.’ We finished this the day after his 85th birthday.”

Because gloves can be pretty handy. Courtesy of Harley-Davidson Lightweight and breathable, the new Women’s Airflow Full-Finger Gloves (P/N 98183-07VW, […]