Roehr Motorcycles – Off The Line 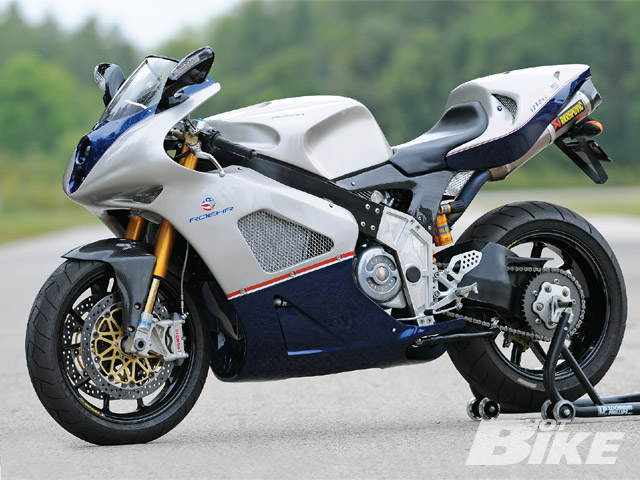 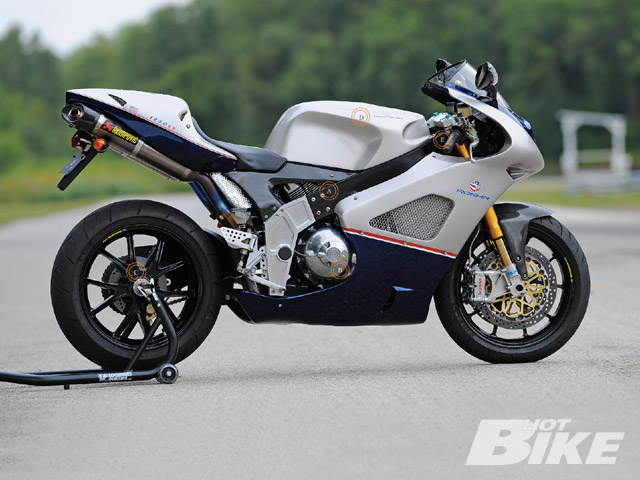 What is it that sets a bike apart? Is it power and speed? Is it body style? Could it be paint? Whatever it is that makes it cool to you, it may not be to the next guy. However, there is a style of bike for everyone and if you are looking for a motorcycle with all the performance of a good sport bike but still want to stay in the Harley world we may have just found what you are looking for. This past February at the V-Twin Expo in Cincinnati we encountered Roehr Motorcycles, where the designer and owner of the company Walter Roehrich released his vision to the public of what he thinks a true sport bike should be. Walter set out to create a new prototype bike with a production line in mind.

The first prototype the Rv500 was released to the world back in 2000. It boasted a 500cc two-stroke, twin crank, V-twin, based on Yamaha YZ250 motocross engine parts, housed in Walter’s own custom made crankcase. It was a combination that offered a totally unique and thrilling riding experience. This success fueled the fire to go even further.

Walter set out to create a new bike that retained the same lightweight, high power, and handling characteristics of the Rv500 but even more striking. The debut of the V-Rod in 2002 inspired Walter to fuse his passion for sport bikes with his love of Harley. However, he was unable to acquire a V-Rod engine. In 2004 the Rv1000 was born, the heart of the bike was a home built 120hp four-stroke V-twin, then as soon as he could get his hands on the H-D V-Rod motor, Walter start building a bike around it and in 2009 the 1250SC was introduced to the industry. At this point it is a build to order bike but they company plans to put out around 100 bikes worldwide.

A) The chassis for this bike features a unique bi-metal beam frame that’s constructed of 4130 Chrome-Moly steel and 6061 T6 aluminum. The bi-metal method allows each material to be used in areas of the frame that their material characteristics are best suited. Through the use of computer assisted analysis, the bi-metal frame was designed using large section, thin wall, Chrome-Moly that is bonded and bolted to be extremely strong, but flexible, and lightweight at the billet aluminum swingarm pivot plates. This flex also adds a level of dampening, which is especially beneficial when the motorcycle is leaned over on the edges of the tires. The frame has a wheelbase of 56 inches with a 23.5-degree rake at the neck and 3.5 inches of trail with a seat height of 31.5 inches. The bike comes in with a dry weight of 432 pounds (200 pounds less then a stock V-Rod).

B) The Roehr 1250SC is powered by a Harley-Davidson V-Rod engine. Also to help create the most powerful American production motorcycle engine available. Roehr Motorcycles has applied its Roehr Supercharging System (RSS) technology to enhance this engine’s power output without changing the character of the power delivery. Under acceleration, the bypass valve in the supercharger allows compressed air to pressurize the intake plenum and progressively builds up to 8 psi of boost at 9100 rpm. Off throttle the bike runs like a normally aspirated motorcycle. Walter tells us that the bike is pushing 180 hp at 9100 rpm, and 115 lb-ft torque.

C) The Roehr Motorcycle rolls around on a set of forged aluminum 10-spoke Marchesini wheels, a 17×3.5 up front and a 17×6.5 out back both wrapped in Pirelli Diablo Corsa 3 high-performance tires. The stopping power is achieved from dual semi-floating discs and radially mounted Brembo four-piston calipers on the hlins 43mm fully adjustable inverted forks. A 245mm single disc, with a two-piston Brembo caliper mounted on the rear wheel. For the rear suspension an hlin’s fully adjustable linkless monoshock handles all the potholes.

D) As far as the bodywork goes, it was the design work of Walter and a company called Sharkskinz, with a little inspiration from the big guns of sport bikes like Buell, Honda, Suzuki, and Ducati. To give the tall V-Twin and supercharger the room it needed, the faux fuel tank on the backbone of the frame is actually a cover for the supercharger and battery box. The 3.7-gallon fuel cell is tucked under the rear tail section.

E) For the controls, the Roehr Ergonomic design combined with traditional placement of the controls is the same as most sport bikes and helps the rider become one with the machine. The bars are set up to allow the hand to roll the throttle with ease without having the rider’s weight on the wrists. As for the feet, the mid-controls are positioned toward the rear almost like rear sets but not too far back. The foot controls can be adjusted to fit almost all boot sizes.

If you got it, why not flaunt it? So we took our new 2018 Harley-Davidson Sportster Forty-Eight Special to iconic […]

Specialty Items To Take On The Road – Used and Abused

The beauties of the Sturgis rally are bountiful.

Ken’s Factory 2-into-1 Exhaust For Dyna