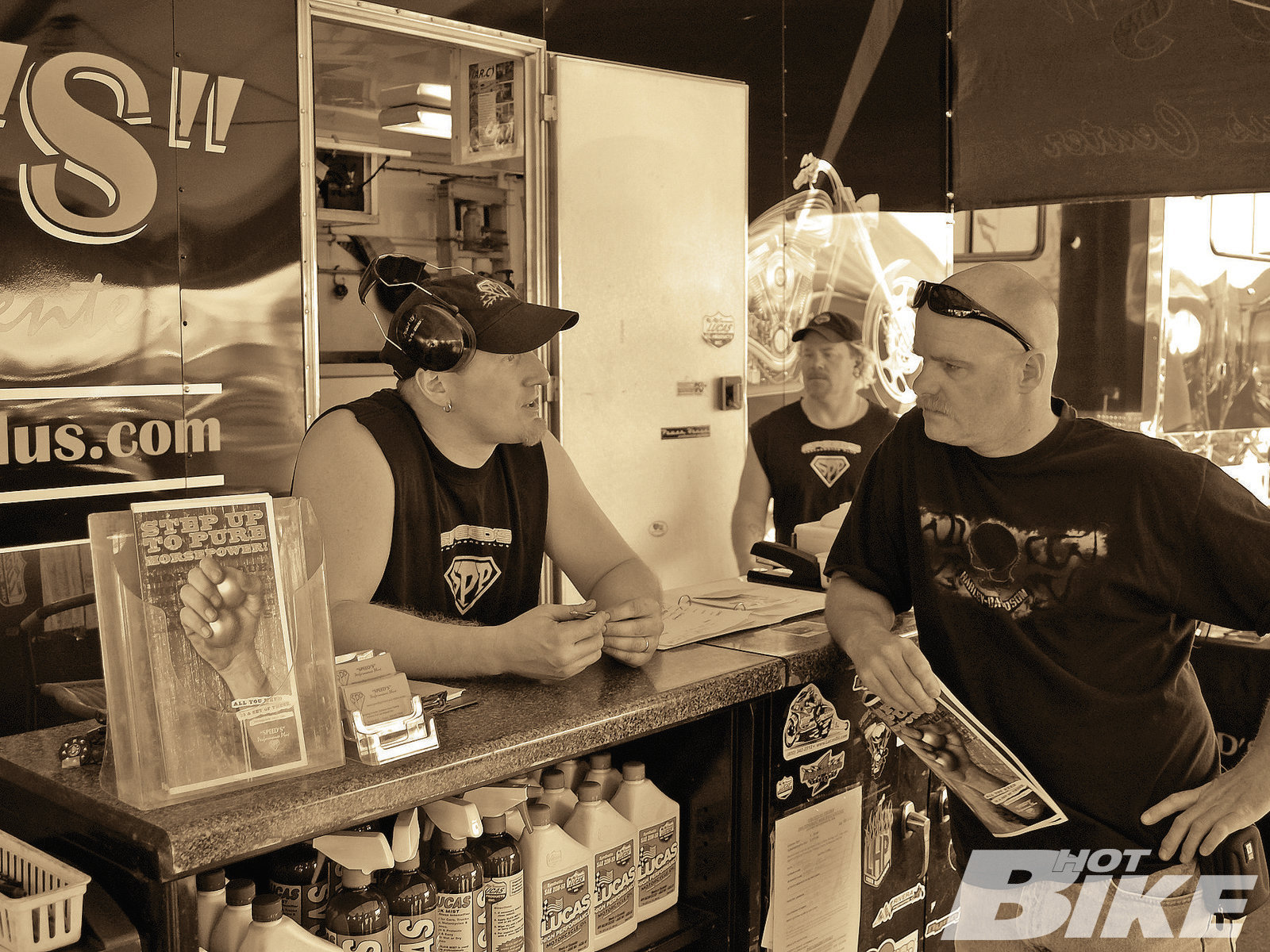 “Riders are constantly asking us about throttle bodies,” Jason Hanson begins. “They have the free-flowing pipes, free-flowing air filters, maybe some high-lift cams and now want to know if they need a bigger throttle body, too.” The guys at Speed’s Performance hear this all the time and the answer, Jason says, isn’t always easy. “It really depends,” comes the response from this savvy tuner. “What’s right in some cases isn’t right for all cases. It comes down to how much has really been done to that motor, and what, exactly, does that rider expect from his bike.”

Okay then, at what level of engine modification do you really need that bigger throttle body? Boiled down to the basics, increased performance is all about cylinder fill. The more you can pack into that combustion chamber the bigger the bang. So let’s say you already have that high-flow air filter, you’ve re-mapped the ECM to optimize fuel delivery and you’ve added performance pipes. A set of high-performance cams might even be in the picture. Does a bigger throttle body fit into all this? Not necessarily, say the guys at Speed’s. In many cases that stock H-D throttle body will work just fine on a relatively mild 88- or 96-inch motor, especially when all-around ridability with low- to mid-range performance is important. This doesn’t mean you won’t pick up some performance with the switch to a slightly larger throttle body, but generally speaking it’ll be a swap good for 3- to maybe 5 horsepower. Cost effective? You choose.

Hopefully all this should help clear up some of those ‘what about my throttle body?’ questions.

Now look at another situation. In this scenario that Harley-based motor is a big-incher, a 107, a 117, a 120, a 124ci or maybe something even larger. And along with that free-flow air filter and the high-lift cams and the right pipes this big-bore/long-stroke motor has a reworked set of heads on top. Bigger valves and bigger, smoother and much more efficient ports. Here, without much question, that stock throttle body is going be a roadblock to performance. Especially true if all this work and equipment has been lavished on an earlier bike that used one of the 44- or 46mm throttle bodies as OE. But even one of Harley’s 50mm units, introduced in ’08, can be problematic. Those throttle bodies and the manifolds that go with them are simply too small for many big-inch applications. What’s the right size? Once again the SPP techs come back with a “one size doesn’t fit all” answer. “It all depends on the specific combination of parts and how that rider uses his bike,” Jason says. Further complicating the issue, there are lots of size choices here with replacement throttle bodies ranging up to an absolutely huge 70mm. And just as is the case with carburetor swaps, too large a throttle body can be as detrimental as keeping one that’s too small. “A big throttle body and manifold on an engine that doesn’t need it,” Jason explains, “will actually slow down the airflow. The result will be a really soft low- and mid-range, an engine that doesn’t begin to respond until it’s spinning at 3,500 RPM or better, and it’s likely to still be mushy there.”

But we want specifics, right? Okay, here they are. “As a rule of thumb,” Jason says, “on 103-, 107- and 110-inch engines something like a 55- or 58mm throttle body work pretty well.” Those 58mm bodies can be snappy performers on engines with displacements right up into the 117- or 124-inch range, too, he says, flowing plenty of air for a powerful top-end while still keeping that crisp, responsive lowa- and mid-range. And for the really big-inch motors, and where wide-open-throttle power is paramount, there are those huge throttle bodies, the 62-, 66- and even that 70mm version. Bear in mind, though, with some of those really big throttle bodies a step or two up in injector size might be in the cards; a re-mapped ECM set at 100-percent fuel flow through stock-sized injectors still might not be enough to keep up with this greatly increased air flow.

Hopefully all this should help clear up some of those “what about my throttle body?” questions. For an exact recommendation for a specific application, though, it’s best to consult with a pro. Stop by and talk with Jason, Jamie or any of the Speed’s Performance team next time they’re at a nearby event. The schedule’s all on their web site, the throttle bodies and manifolds are on their truck – along with the dyno to dial it all in.

It seems now that the Pig Flu is the latest fashion statement, everyone wants to be a biker. Too bad […]