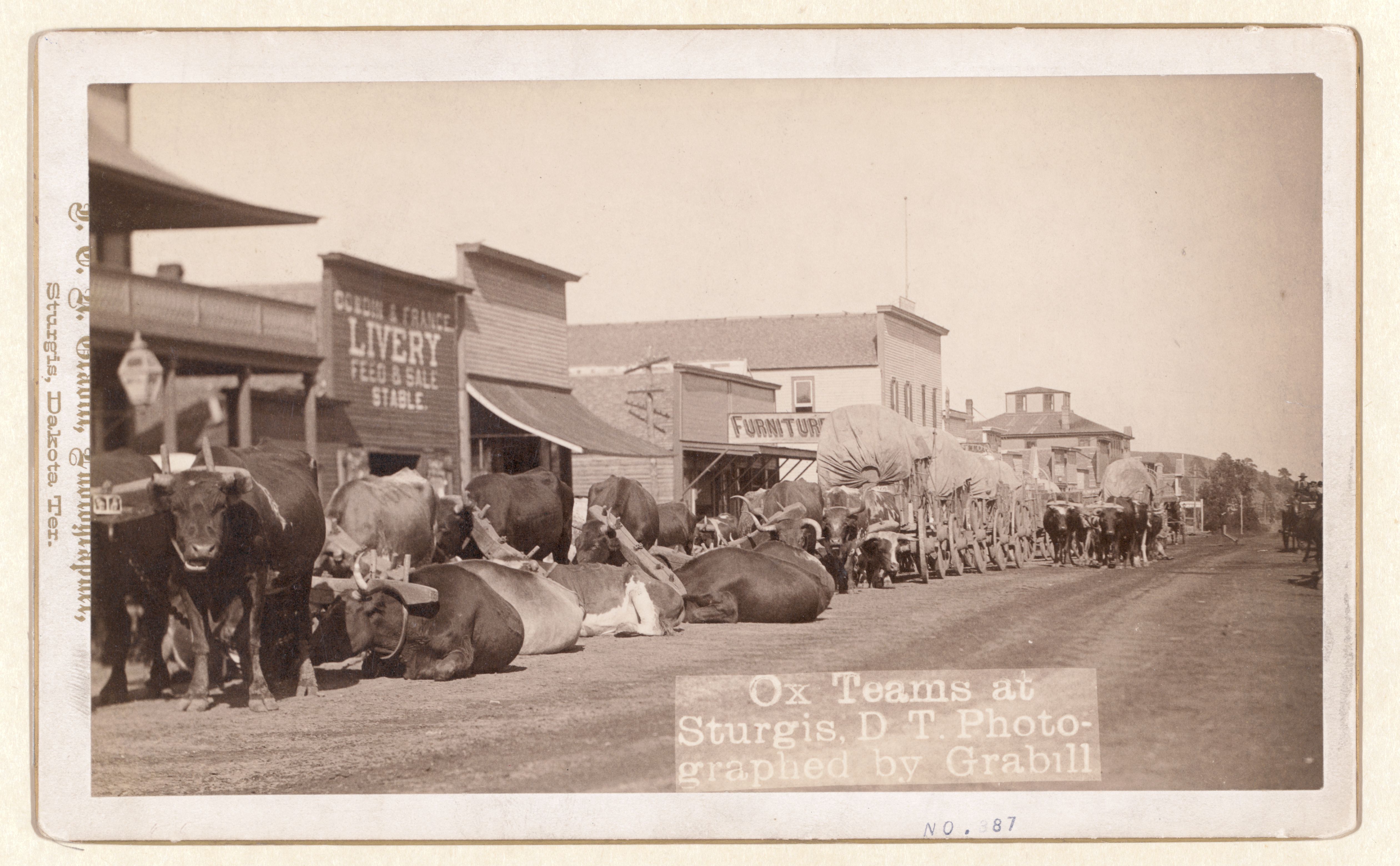 The Sturgis Motorcycle Rally looks pretty hot for a 79 year old and I have to admit, I’d totally hit it. Although the Black Hills Motorcycle Classic gets overcrowded every year these days, at the heart of it, it’s still about the riding. Whether you trailer in and just run locally or actually go the distance on entirely on two wheels, you’re still surrounded by the Wild West feel of the landscape, punctuated by all the rally trappings in Deadwood, Spearfish, and Sturgis proper. Here’s a highlight reel from the area’s long and illustrious life.

In 1874, The Custer Expedition leads to the Black Hills Gold Rush, sparking the Great Sioux War two years later. Right around this time, Sturgis is founded and holds its first Annual Rally and Races—of the horse variety. Fifty years of horse racing will lead up to the first motorcycle event in 1936. There was also that small matter of the Sioux handing Custer his ass at the Little Bighorn in June of 1876. Deadwood is a booming gold rush town. Jack McCall assassinates Wild Bill Hickok in Deadwood two months after Custer’s Last Stand, while Bill is playing Five Card Draw. His two-pair hand, Aces and Eights, is now known as the Dead Man’s Hand. All of this sets the stage for the Sturgis rally’s Old-West vibe. With this newfangled refrigeration thing draining the family’s ice business, a young guy named J.C. “Pappy” Hoel opens his Indian dealership in the Sturgis area in 1936. Business is good but there isn’t anything in the way of community support for riders in the area. He and some fellow riders found the Jackpine Gypsies MC to remedy that problem. In 1937, the club becomes an official charter of the American Motorcyclist Association.

The first organized event was an AMA Gypsy Tour through the Black Hills. Pappy and Pearl Hoel let riders camp in the yard behind the Indian dealership. Pearl made the food, including dogs, sloppy joes, tater salad, and watermelon.

The next year was a big deal for Sturgis. Not only was Mt. Rushmore coming to completion, the nearby Sturgis Chamber of Commerce teamed up with Hoel and the Gypsies to build a half-mile dirt track for motorcycle racing. The one-day event took place on August 14, with 9-12 racers duking it out for $500 in prize money. The first race at the new track was won by “Smiling Johnny” Spiegelhoff.

Growth shot up fast. In 1939, over 800 riders turned out for the races. Nineteen riders participated in what was now a full-fledged rally, with board wall crashes, half-mile flat track races, jumps, and head-on crashes with cars—on purpose. Pappy and Pearl were great hosts; their hard work and charm were the heart of what would become the Black Hills Motor Classic. There was also an organized ride to Mt. Rushmore with over fifty bikes making the run.

When you have a great event, word gets around. Rapidly. Come 1940, the Black Hills Motor Classic grew to a two-day moto fest with an estimated 5,000 attendees; the dirt track race had 150 competitors. Those early rallies were all about stunts and racing. The Jackpine Gypsies operated the tracks and hill climbs.

Just like with everywhere else in the world, Sturgis was doing pretty well until that asshole Hitler made a mess of everything. The AMA stopped its organized motorcycle events, including Sturgis, in ’42 and ’43. That’s why we’re celebrating Sturgis’ 79th birthday in 2019 instead of 2017. Thanks for making us all wait, Nazis.

Post-war recovery came quick, though. By 1947 over 400 riders showed up for the Black Hills Motor Classic. In 1949, the rally was so big officials were forced to block off Main Street for a two-hour award ceremony. 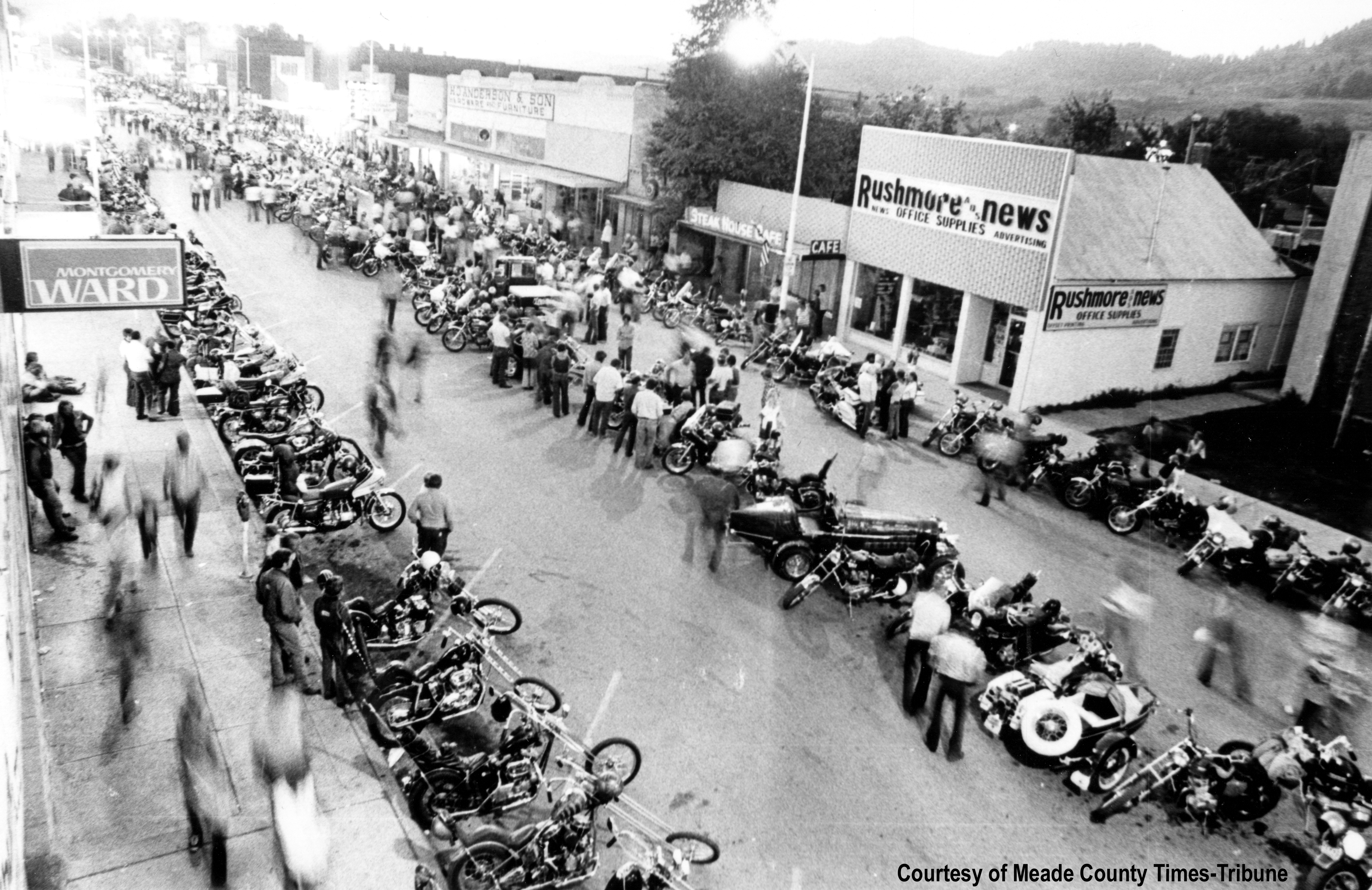 Although the AMA Gypsy Tours waned in the ’50s, Sturgis did just the opposite. Scrambles and the hill climb were added into the yearly mix. In 1954 and ’55, The Black Hills Motor Classic was a stop on the AMA’s new Grand National Championship series.

More events were added all the time. Board wall crashes, ramp jumping, and head-on car collisions are added to the stunt roster. In 1964, the rally grows to a three day event. City officials start blocking off an entire side of Main Street just for motorcycle parking during the rally. A year later, the rally grows again to five days. By 1970, the post-WWII Sturgis rally is up to 3,000 riders a year. 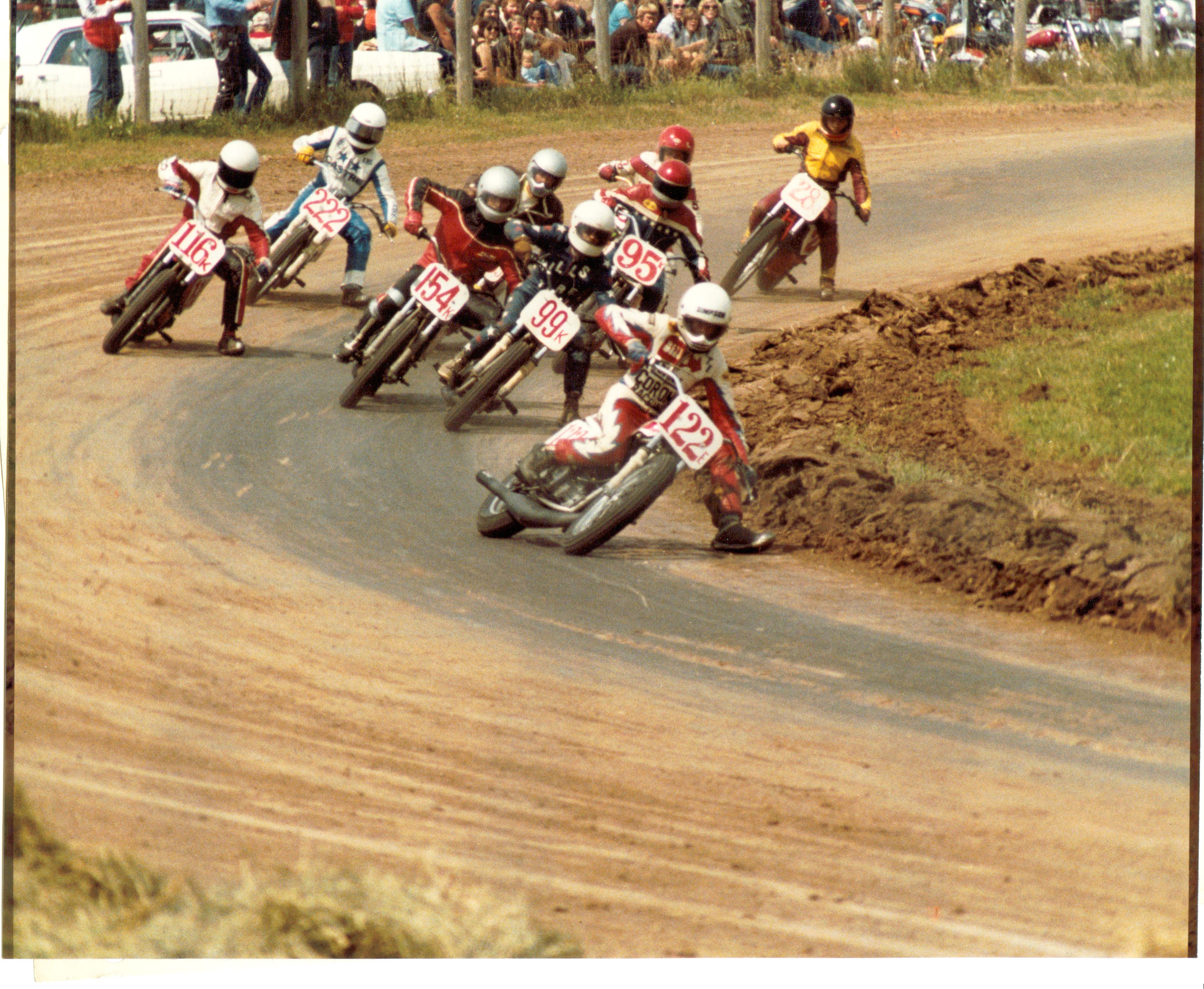 Thanks to movies like Easy Rider and On Any Sunday, motorcycling exploded in the 1970s. The Sturgis Rally and Races was not immune. The rally starts the decade at 3,000 riders a year but by decade’s end, over 30,000 riders a year invade the Black Hills every August. When 1975 hits, the Sturgis Motorcycle Rally grows to its seven-day duration. Choppers and custom iron start flexing their muscle more and more each year, pulling part of the emphasis from racing and touring to the biker side of the Force. Mayhem plays a bigger part; toilets, bikes, and even streets get doused in gasoline and set on fire.

In the early ’80s, the rally moves from City Park to the surrounding campgrounds to get the hell-raising out of town. Venues like the Buffalo Chip start to spring up. In 1980, Harley-Davidson releases its FXB Sturgis bike in honor of the rally. Five years later, South Dakota Governor Bill Janklow signs a proclamation declaring the rally “Pappy Hoel Week.” Sadly, Pappy only gets to enjoy that honor for four more years. He passed away in 1989, but his wife, Pearl, lived on as the beating heart of the rally until her passing in 2005 at the age of 99. 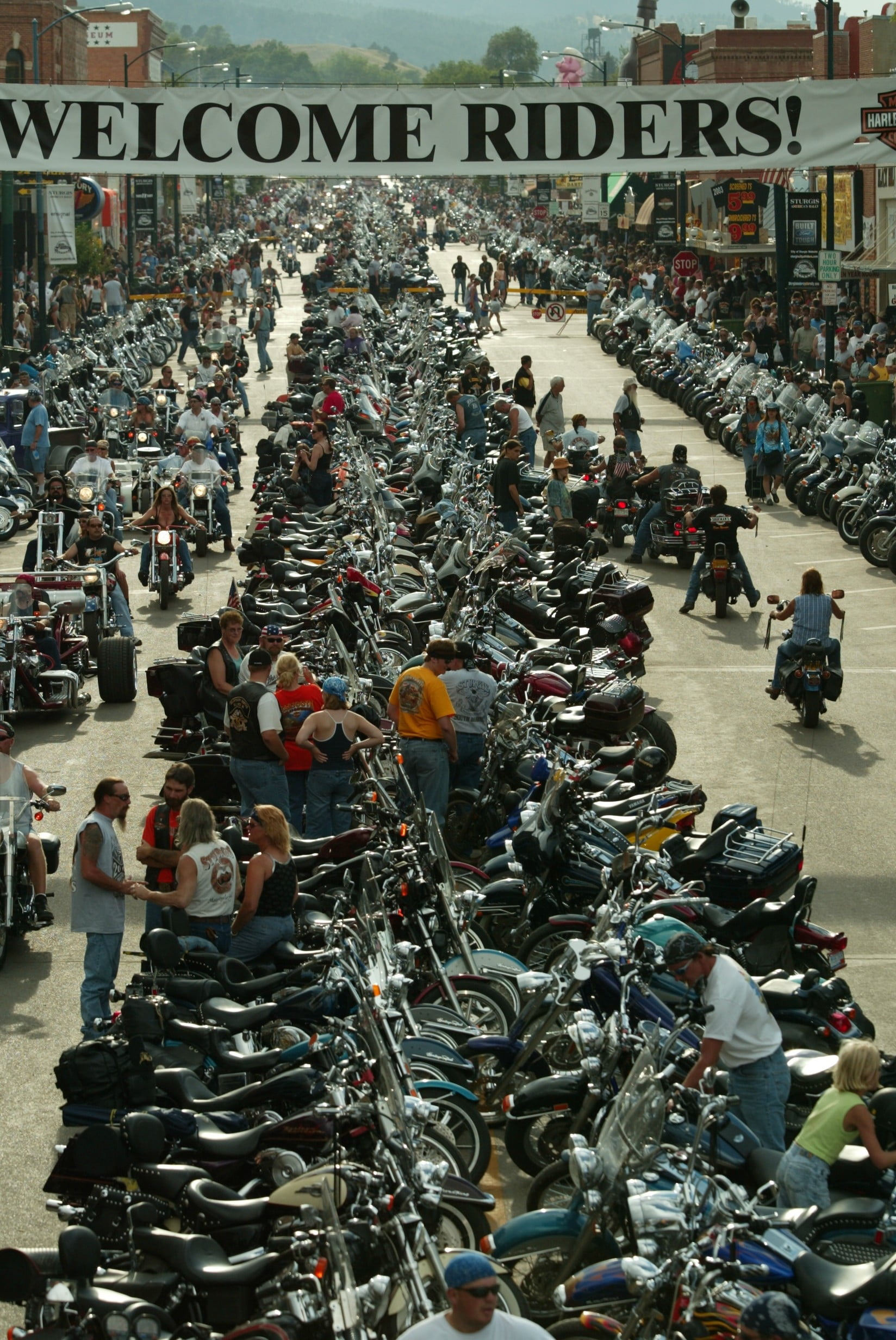 This is the age of the rally as most of us know it: huge crowds, bike shows, vendor villages, and concerts galore. Campgrounds have grown into biker-focused venues with races, vendors, and big name concerts all rally long. Depending on who you ask, Sturgis attendance hit 425,000-600,000 people in 2000. Regardless, over 400,000 riders a year make their way to Sturgis every year now.

Special thanks to the Sturgis Motorcycle Museum & Hall of Fame for their images.

Dave Perewitz is one of the top custom painters in the motorcycle industry. So it seems fitting for him to […]