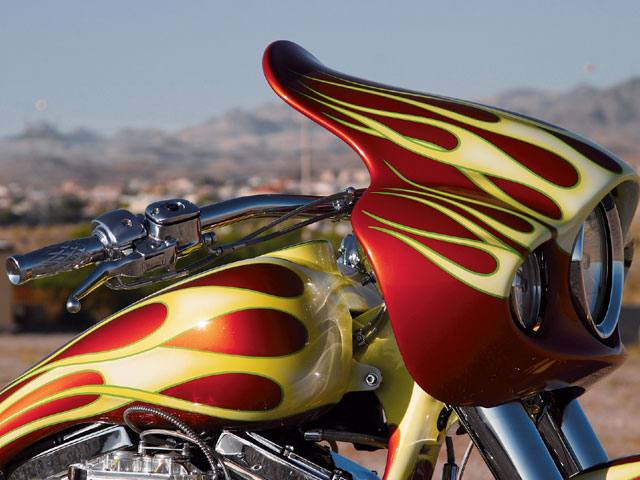 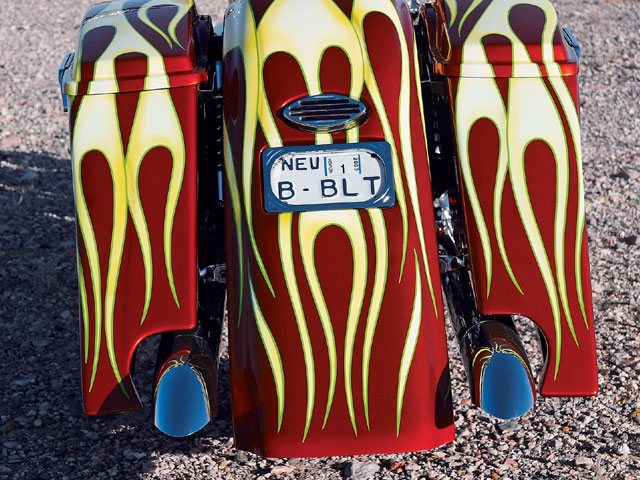 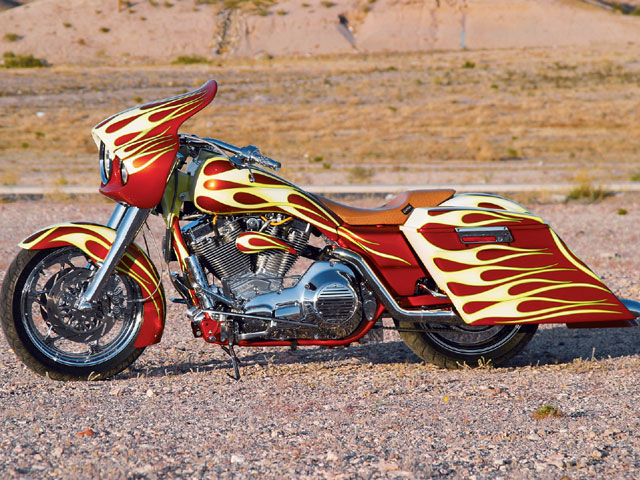 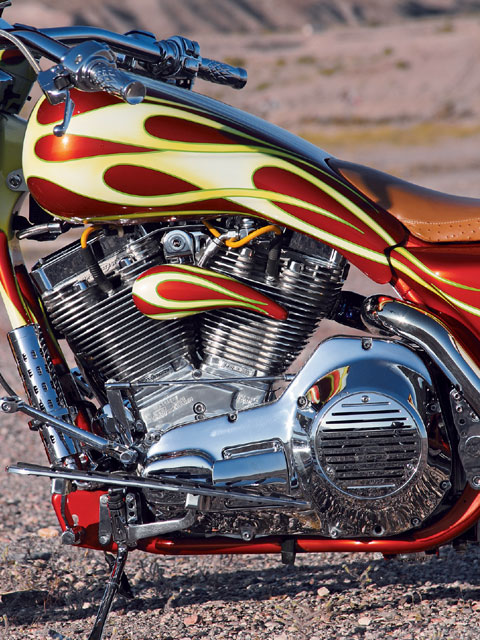 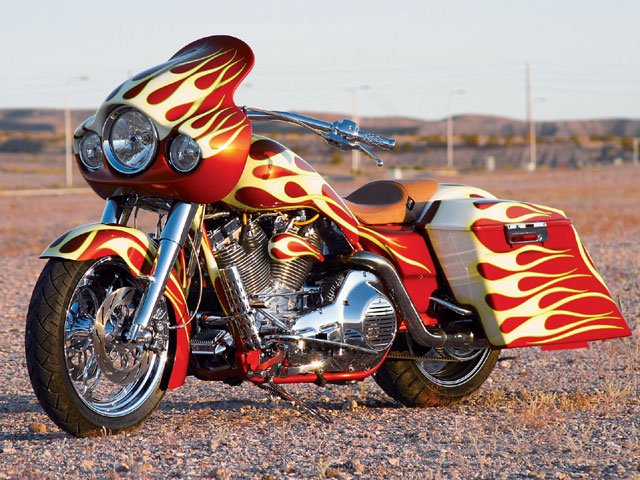 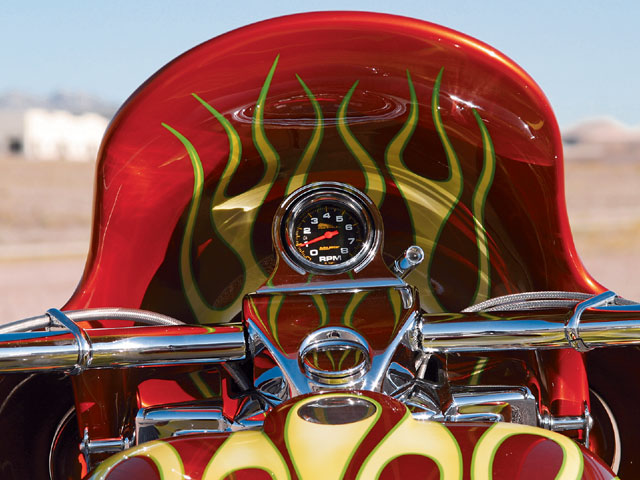 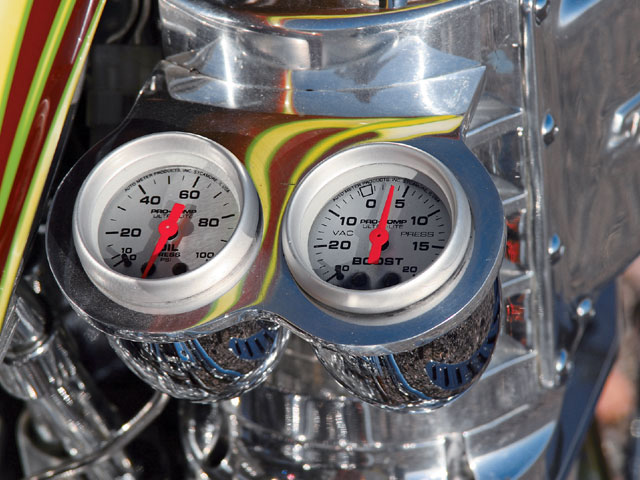 One of the most common things you’ll hear a Harley owner say is “I’ve been customizing my bike for (insert number of years), and I’m still not finished.” It seems Harley owners are never satisfied; they’re always adding parts or completely changing the look of their rides, and Barney Parker of Reno, NV, and his ’97 Road King are a perfect example of this phenomenon.

Back in 2001, when Barney heard that his brother-in-law was selling his Road King, Barney didn’t have a dream bike pictured in his mind. All he knew was that he wanted a bike, but not a chopper like everyone else he knew, and since he was more of a cruiser type anyway, he figured the Road King would be a solid base to start messing around with some ideas he had.

As with most of us, Barney didn’t have a huge wad of cash to throw at the bike all at once, and he knew it would take several years to work his current ideas into the bike. But he was OK with that because it would give him time to come up with new ideas along the way.

The first thing on Barney’s agenda was to get rid of the purple paint and drop the stance. So he headed over to see his good friend and custom painter Eric Collins, owner of Final Finish Auto Body. After a quick brainstorming session, Eric suggested they take the bike over to John Schultz, aka “Johnny Nitro,” owner of The Chop Shop. Barney and Eric relayed their ideas to Johnny Nitro (a nickname he picked up from his years working as a clutch specialist on Top Fuel dragsters), who immediately began the first of many modifications. Johnny started by stretching the gas tank to flow into the side covers and cleaned up the top of the tank by ditching the dash and smoothing the lines over the gas cap. He dropped the front and rear of the bike with Progressive Suspension lowering kits and added to the lowered look with a set of Ness fenders. Johnny also installed a 120ci Merch motor, Baker six-speed, Ness wheels, Pro-One oil cooler, and a Corbin seat. After he fabricated a set of custom beach bars, the bike was handed over to Eric, who did some extensive fiberglass work on the saddlebags to give them a stretched look that matched the flow of the rear fender. Eric then finished up the first phase with a PPG Orange base highlighted with PPG White and Banana Pearl flames.

During the winter of 2002-’03, Barney saved up some more money and came up with a new list of ideas. The braided oil lines were replaced with stainless-steel hard lines, the clutch and primary were changed out to a dry BDL enclosed belt drive, and Johnny fabricated a horn cover that flowed with the lines of the tank.

The following winter Barney was back again. Even though he was well into triple-digit displacement, Barney still wanted more horsepower, so they decided to supercharge the Merch with a Magnacharger. With the compression set at 10:1, the full boost from the supercharger would push compression up to 14:1, which meant Barney would now require a steady supply of race fuel. To go along with the Magnacharger, Johnny made a custom oil-pressure and boost-gauge mount off the back of the supercharger. Johnny also had to make a custom exhaust because the stock setup was hitting the supercharger. With the addition of the blower, there were a couple of things Johnny was worried about: the clutch and traction. Johnny knew from his racing days that excessive heat from the monster motor would kill the clutch, so he made a scoop in place of the inspection cover and milled some grooves in the derby cover to help with venting. Johnny tackled the traction issue by getting rid of the stock 130 rear tire and modifying the back of the bike to fit a 180 using the stock swingarm and belt.

It took several months, but Barney and his RK were back at The Chop Shop; apparently, he was tired of mixing and hauling VP 116-octane fuel everywhere he rode. Barney still wanted the added power of the supercharger, so the solution was to install a 124ci S&S; motor and drop the compression to 8.5:1. After re-fitting the blower to the new motor and installing a new S&S; IST ignition system, Barney was once again happily blasting around on pump gas.

This brings us up to the most recent round of changes. Barney cruised into the shop and asked Johnny what he thought about adding a fairing. After a short discussion, they both felt that a fairing would complete the look of the bike. A Corbin fairing was chosen because of its unique shape and aggressive lines. Then the Road King was handed over to Eric once again to paint the fairing and spruce up the rest of the bike.

It’s been almost six years since Barney picked up the Road King, and even though he had no clue what he wanted his dream bike to look like, we think he’s starting to get a pretty good idea.

Original, unique and just plain bitchin, this killer new seat by Le Pera is yet another completely new design from […]