This article was originally published in the October-November 1997 issue of Cycle World’s Big Twin magazine.

Building a true, one-of-a-kind custom is never easy. The very idea of bolting together bits and pieces gathered from a multitude of sources all around the country, and then expecting that collection of parts to work in harmony, is sheer, unfounded optimism. Even when all of those components are known, proven items, the fact that they weren’t engineered to work with one another means you can’t always predict the behavior of the unique motorcycle that results.

When you figure new, unproven ideas into the equation, however, the potential for problems goes completely off the chart. What’s more, anyone who assumes this kind of risk moves from the role of craftsman to that of research-and-development engineer. And just in case you didn’t know, R&D work is tedious, time-consuming and, perhaps most of all, frustrating as you try to work the kinks out of an idea that may or may not be feasible. It’s no wonder, then, that most custom builders prefer to stick with known concepts rather than trying the experimental.

Apparently, we like doing things the hard way. Because in conjunction with Damon’s Custom Creations and Pro-One, we agreed to became part of the R&D process for Pro-One’s new Quad-Link rear suspension by experimenting with it on BT Custom II. In the end, a lot of hard work and late nights resulted in a chopperesque hot-rod that not only has an unusual rear suspension, but a suspension that actually works. 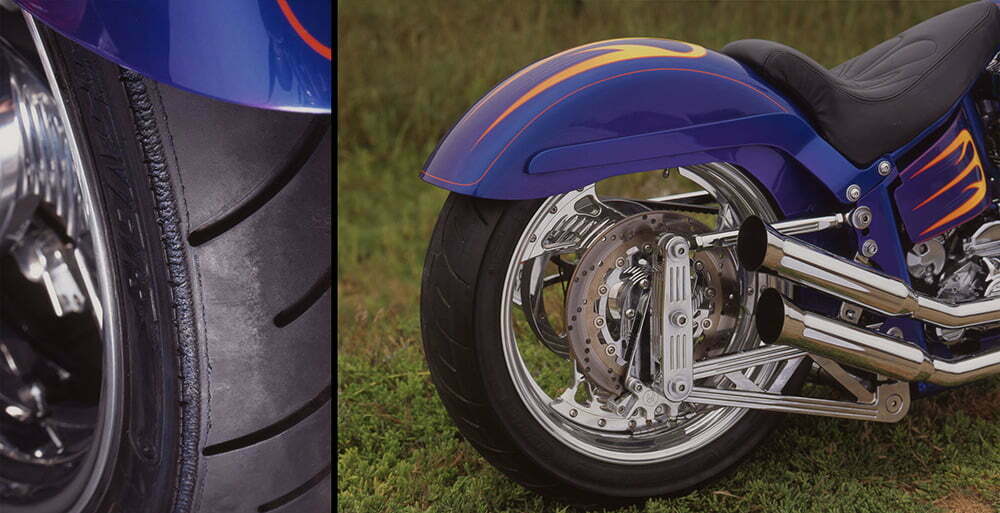 One wide, sticky Avon radial gave part of its (tread) life for our great experiment. Tight clearances between the wheel and the fender-mounting hardware permitted the suspension little room to flex before rubber flew.

If you read the previous issue of this magazine, you already know about this Big Twin custom. You also know that when it made its debut in Daytona, it was a non-runner, hastily assembled so we could put it on display during Bike Week ’97. Thanks to lots of long hours by Tom Prewitt and his crew at Damon’s, the bike was ready to ride a couple of weeks after Daytona. But on that first shakedown, Prewitt felt something strange in the handling, as though the rear suspension were allowing excessive side-to-side movement of the back wheel. Sure enough, when Prewitt stopped to check the situation, he noticed a groove cut into the left shoulder of the rear tire, notched by some of the fender-mounting hardware. Something serious was amiss in the Quad Link suspension.

Prewitt made several calls to Pro-One to determine the cause of the suspension malady. After dismissing improper assembly by Damon’s, Pro-One concluded that there may be some movement of the lower swingarm crossmember—a thick piece of tubular steel that joins the lower swingarm side braces and intersects with the shock mount. It is the only part of the rear suspension that keeps the swingarm from twisting in the vertical plane. At first, Pro-One provided Damon’s with revised swingarm sections fitted with locating pins, believing that the crossmember would no longer twist relative to the side plates. When that made little difference, Prewitt surmised that the crossmember itself was simply acting as a torsion bar: Though firmly located, its two ends were twisting relative to one another. Finally, Pro-One beefed up the crossmember to the point where it appears capable of securing the entire bike to the belly of the Space Shuttle and surviving the launch intact.

But that wasn’t the only problem with this innovative rear suspension: Prewitt’s crew also determined that there was lateral movement in the upper-link bushings. Pro-One had used an expensive, aircraft-style Heim joint—designed to allow movement in two planes—where a simple, single-plane bushing might have been more appropriate. Prewitt & Co. mocked up a part with plain bushings to test the idea, and it worked wonders. Pro-One has since upgraded this chassis package to include bushings that resist side-to-side movement while still allowing the rear wheel to travel up-and-down freely.

Throughout all of this, Pro-One maintained that a few other builders had tried this frame and suspension setup and none had complained of excessive slop. But as far as we can tell, nobody else is using an engine as stout as our earth-moving S&S mill; and apparently, few builders left as little clearance between the inner fender mounts and the rear tire. Call it the price of being a pioneer.

Both sides of the earth-moving S&S mill.

For what turned out to be a fairly straightforward suspension fix, why, you might ask, did it take several months to get the bike running properly? For one thing, every time Prewitt and mechanics John Hart and Mike Weber tried some revised suspension pieces, they thought they had found the fix. As a consequence, they would test-fit the pieces and then—eager to get the bike back into our hands so we could complete the second stage of this project—send the parts off to the chromer, only to find that further modifications were necessary. Each round of changes brought another, longer series of delays as they tried to keep the cosmetics in lockstep with the mechanicals.

Okay, so we had some headaches, but the result was worth a few bottles of Excedrin. And as with any motorcycle, there is a standout element; for our chopper, it’s the 113-inch S&S engine. This powerplant, which won accolades from Damon’s engine builders for its ease of assembly and high-quality components, bowled us over with its massive output. Down low, it’s reasonably stout even when barely off the idle jet, with decent throttle response. But tug on the wire, and the thumping mill erupts into the kind of arm-straightening, attention-getting mid-range surge that doesn’t do justice to the term lunge. This big-incher gobbles pavement the way a Doberman greets the first meal of the day. And yet the engine seems to tolerate the stop-and-go without any bitching, and the diaphragm-spring clutch is remarkably light at the lever and linear in its takeup. 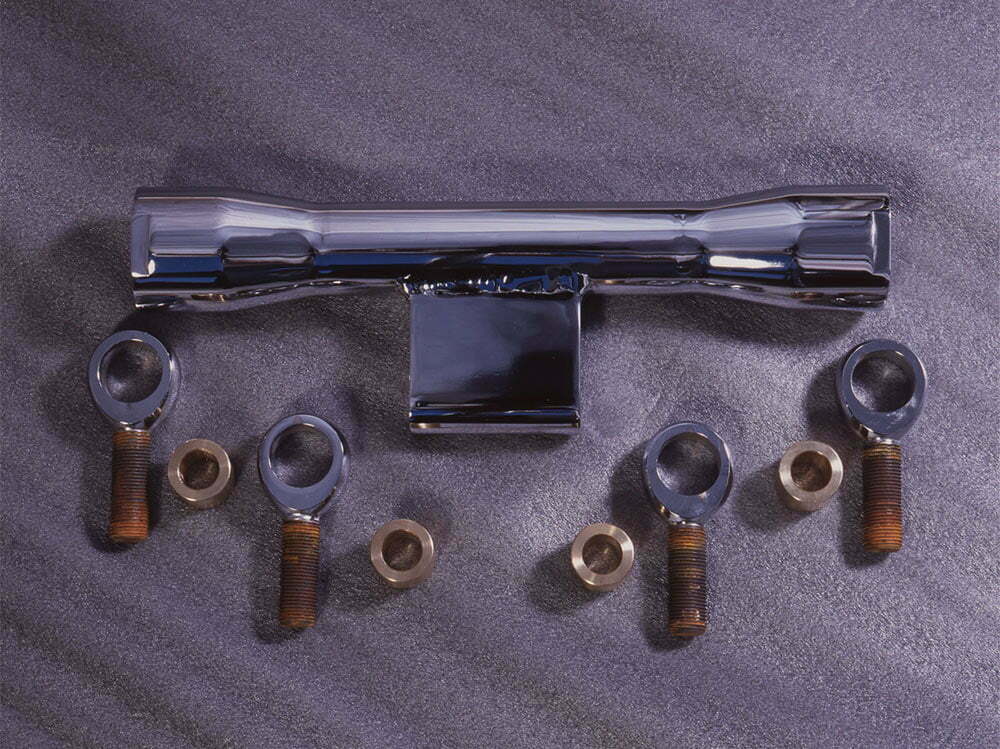 S&S says that if its recommended exhaust and tuning specs are followed, this megamotor will crank out about 120 foot-pounds of torque and 113 horsepower (one hp per cubic inch) without even breaking a sweat. But although we definitely wanted our custom to be a real arm-stretcher, we were willing to sacrifice a bit of sheer top-end rush in order for the bike to have the right look. So, we opted for the Samson staggered duals, which allowed the motor to get fairly close to its claimed peak torque but cut off quite a few ponies above 4500 rpm. That’s one of the compromises often inherent in building a custom: Function follows form.

We also tried one of Samson’s 2-into-1 pipes, which let the engine deliver 120 foot-pounds of torque at 3800 rpm, exactly what S&S had claimed. But neither is that pipe tuned for optimum top-end output, so the horsepower peaked at just under 100 at 4700 rpm. If you’re interested in one of these 113-inchers and are adamant about extracting that last few horsepower, S&S highly recommends bolting on a Thunder Header, which should allow the motor to reach or exceed its claimed 113-hp peak. 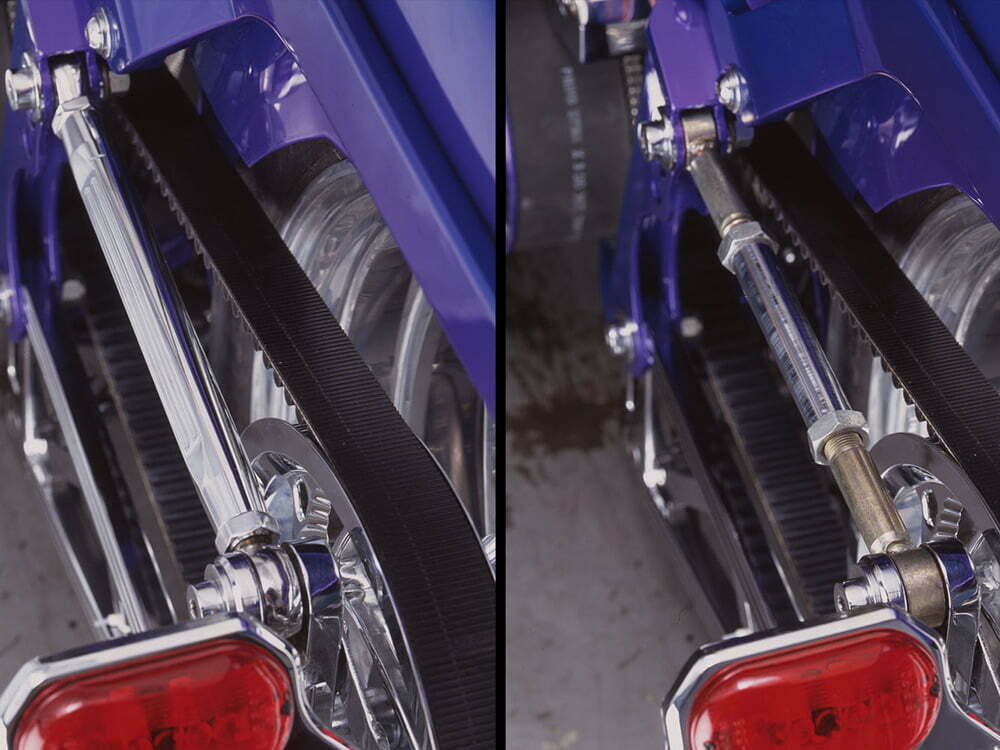 Obviously, it would be senseless to mate this kind of power with a limp-wrist chassis, but the Pro-One setup finally seems up to the task. Some of the allure of the multi-link rear suspension is freedom from squat during hard acceleration. Yank open the throttle and the Pro-One chassis transports you to that piece of pavement that just a second ago was a speck in your far vision—all without undue drama. And considering how we have the suspension slammed, the bike rides decently enough and performs perfunctory turns without much complaint. Of course, we’ll have to be mindful of that low-slung belt guard on the left. And the lower swingarm braces look to be one of the first items that will meet the tarmac should we press the cornering issue. We promise to be careful.

Ultimately, what we wanted, we got. Big Twin Custom II is both distinctive in style and a standout in straight-line performance. Not to mention that it turns heads like Claudia Schiffer in a thong bikini.

The heavty-duty construction, quality, and ease of install makes it an instant classic on custom Panhead and Shovelhead motorcycles. Courtesy […]