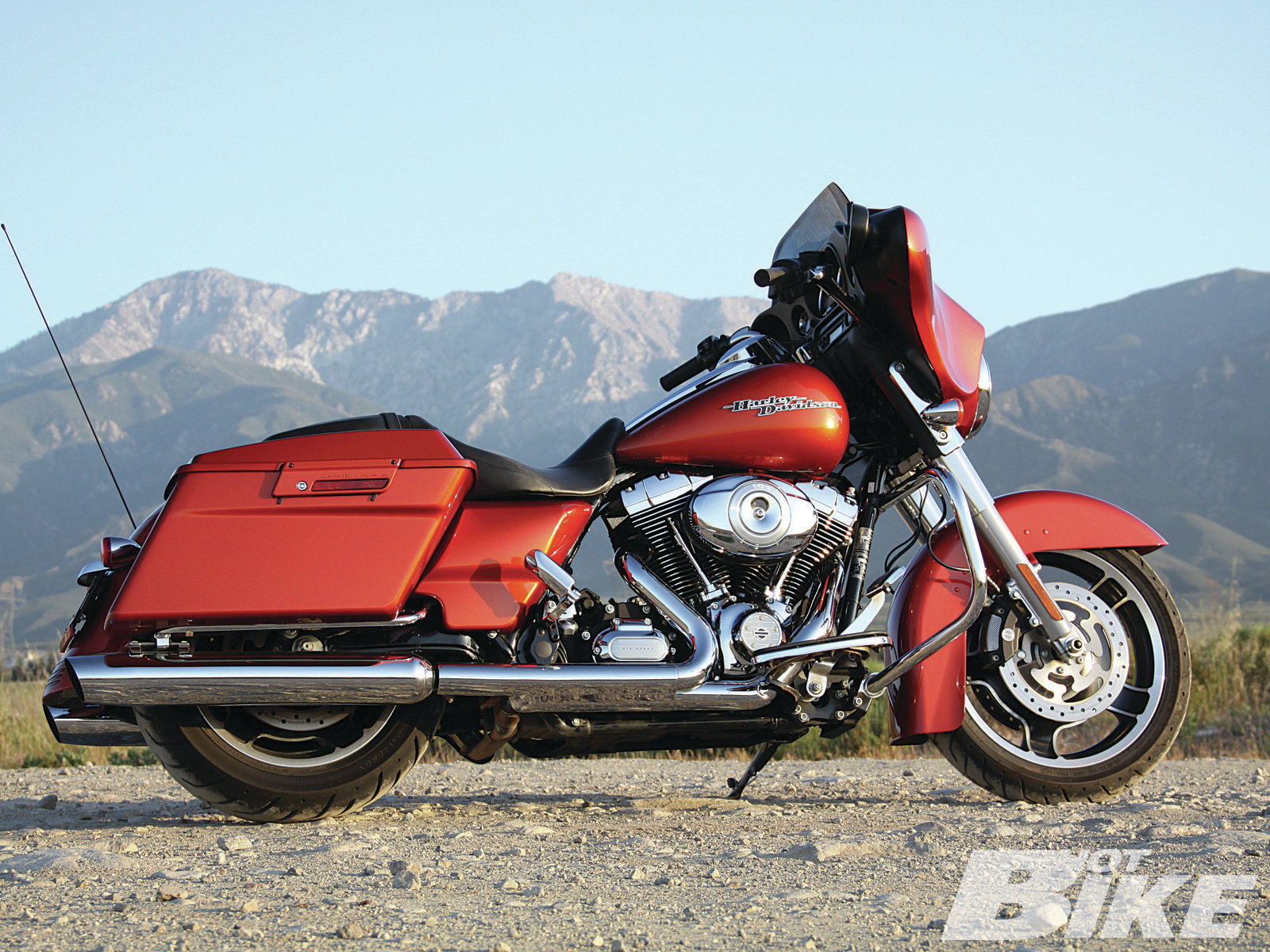 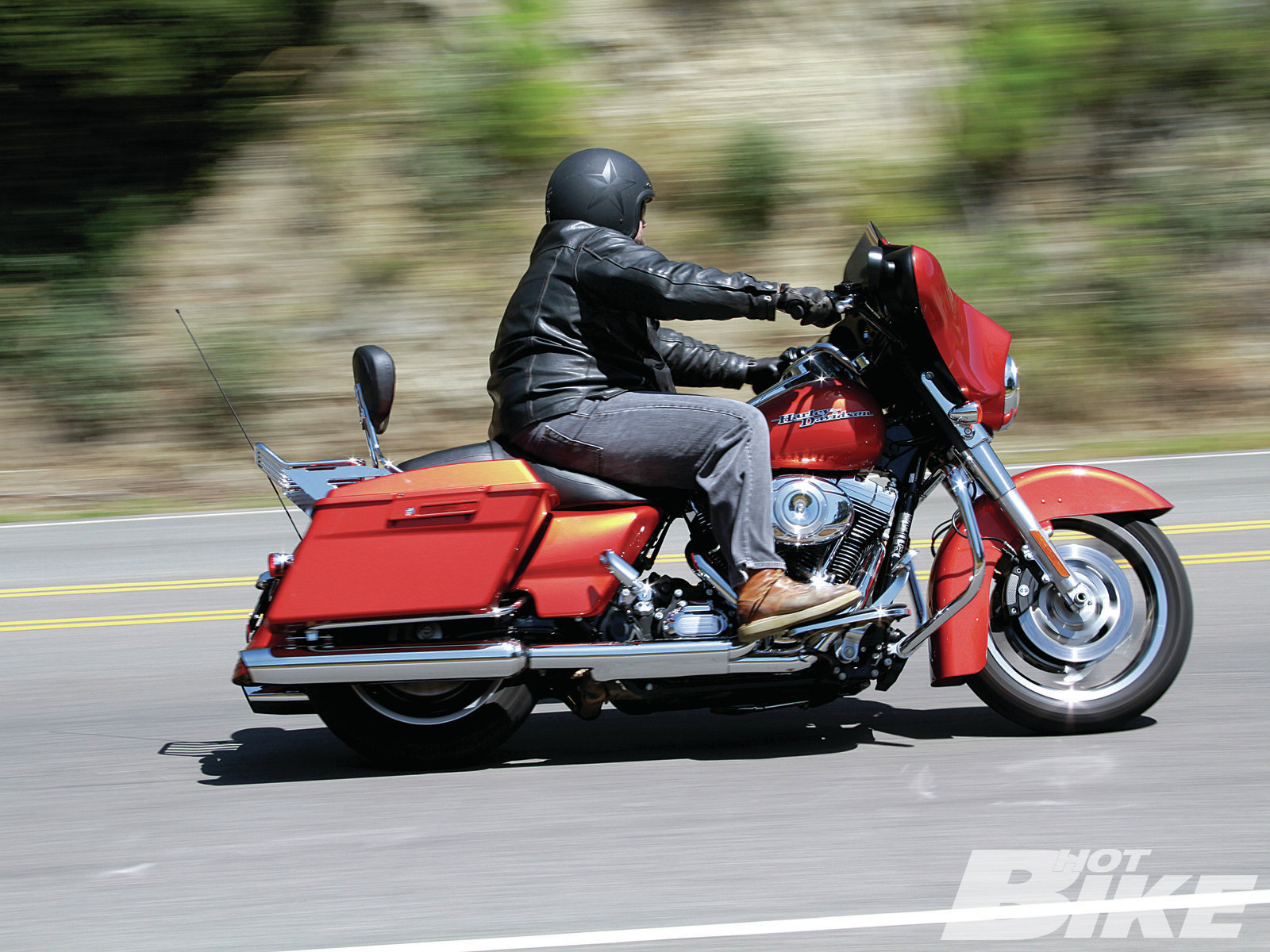 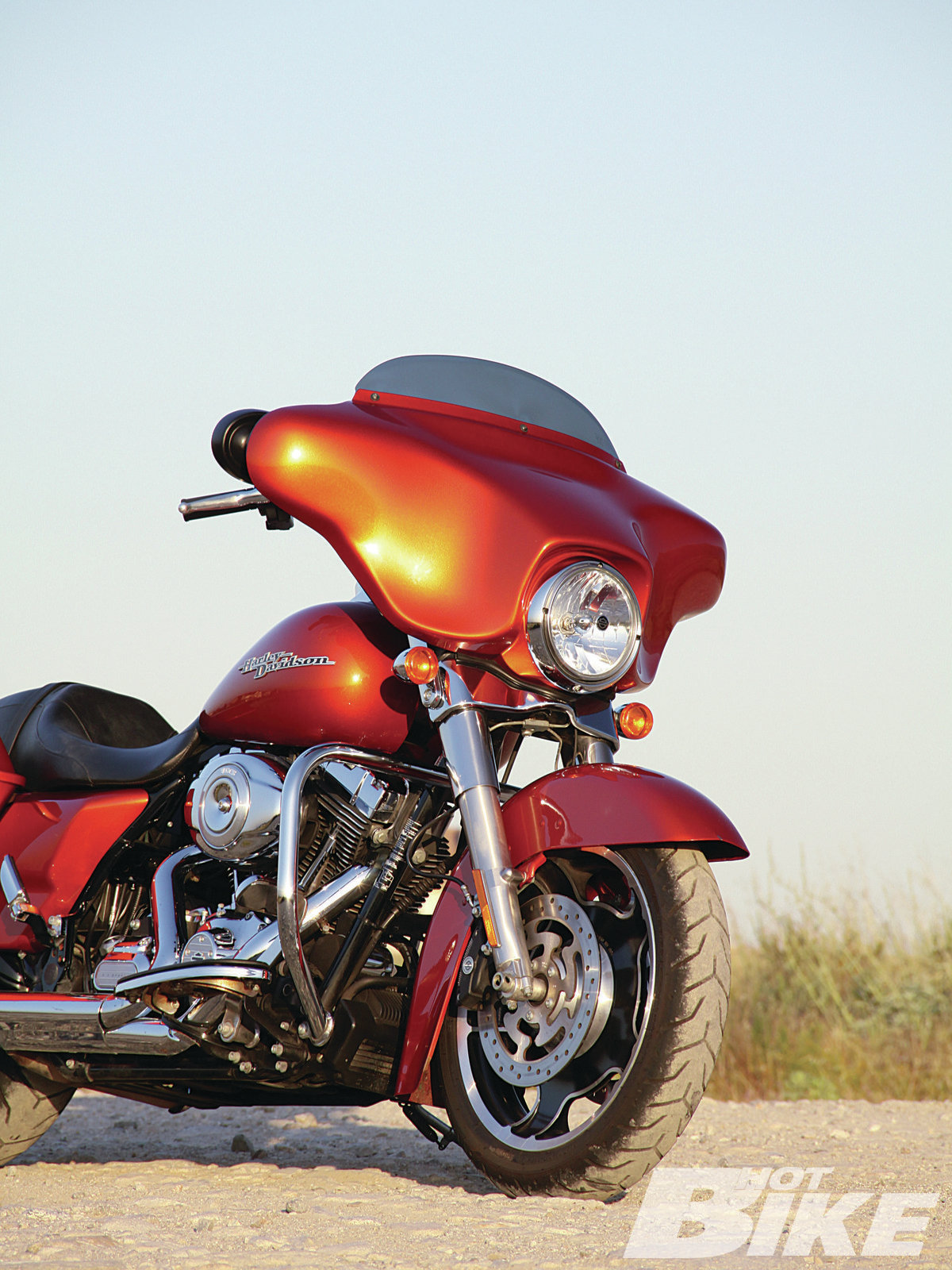 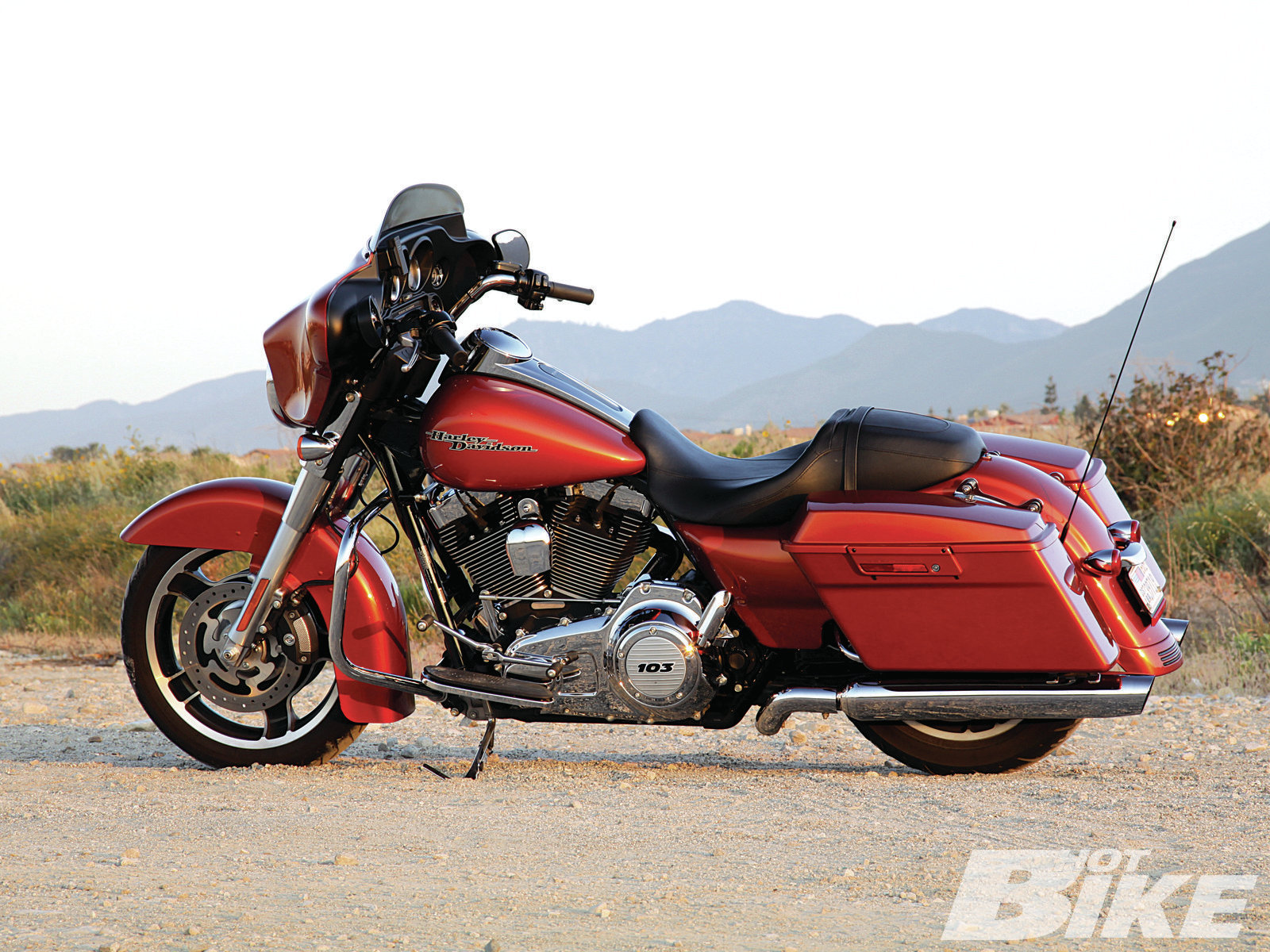 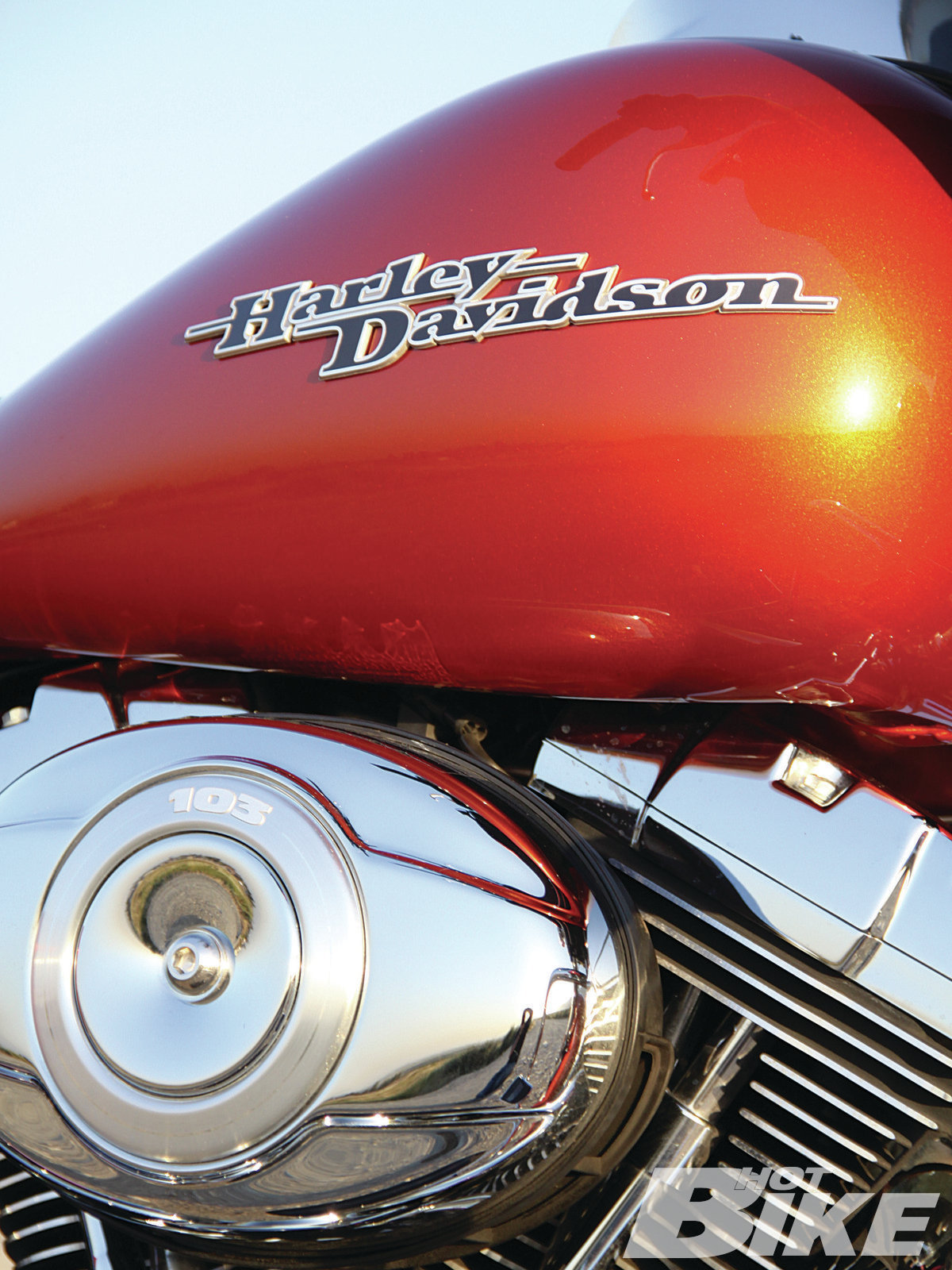 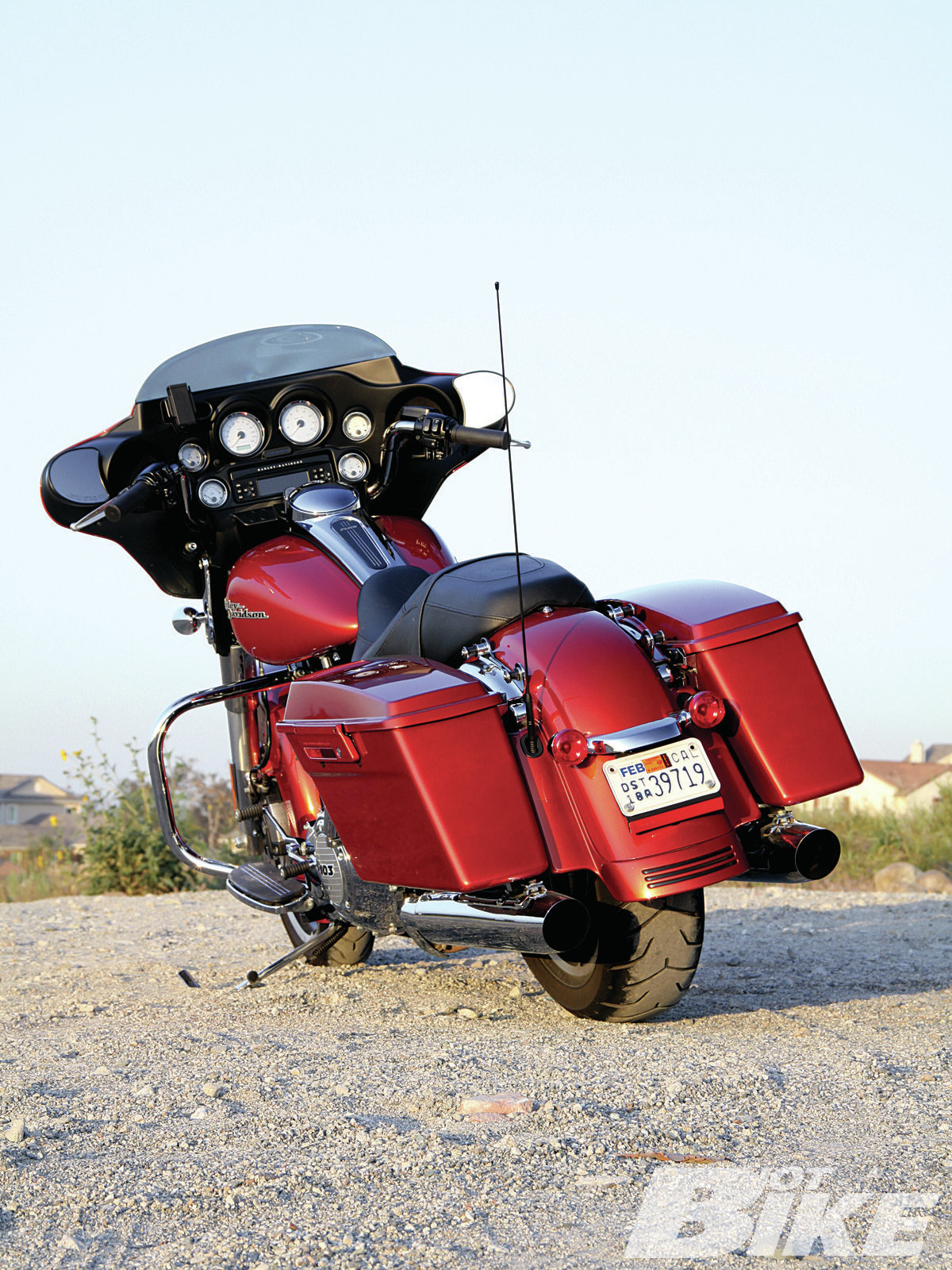 We all want more; more money, more power, more hours in the day, more horsepower, more bang for our buck, etc. Actually the last two might be top priorities for Harley-Davidson enthusiasts. Therefore we thought it was a pretty smart idea that Harley decided to offer a PowerPak option on select models for 2011.

Power, peace of mind, and performance, the PowerPak is like hitting a trifecta. For $1,995 more on top of the base price, certain new bike owners have the option of receiving their bike with a 103ci engine, H-D Smart Security System, and ABS brakes. The PowerPak comes standard on the ’11 Road King Classic, Electra Glide Ultra Limited, and Road Glide Ultra models and is offered as a factory-installed option on ’11 Street Glide and Road Glide Custom models. We see the PowerPak as a great alternative to those that want more oomph than the base 96ci mill, but don’t want to pony up 10-plus Gs to get into the saddle of a 110ci CVO model. With the PowerPak option you can get some of the most desirable upgrades people often want for quite a bit less than the cost of a CVO.

The heart of the PowerPak is the 103ci engine. The 103 features the same 4.38-inch stroke as the stock 96; however, the bore is punched out from 3.75 inches to 3.875 inches. According to Harley the increase in displacement equates to 102 lb-ft of torque at 3,500 rpm, versus the 92.6 lb-ft of torque the 96 puts out; an increase of nearly 10 percent in peak torque. To help keep the less honest at bay, the Smart Security System offers automatic self arming and disarming through a hands-free fob, which communicates directly with the security module on an individualized frequency. So when the rider switches off the ignition and leaves the proximity of the motorcycle, the Smart Security system disables the starter, ignition, and EFI. In the braking department, the ABS works in conjunction with Brembo dual four-piston calipers up front and a solo four-piston caliper out back gripping down on 300mm rotors to help maintain control during braking events, especially those that occur in less than optimal conditions. The ABS system isn’t linked which means that the rider still maintains independent control of front and rear brakes.

Our local fleet center, which houses all H-D’s press models, had an ’11 Street Glide with the PowerPak installed and we were lucky enough to get our hands on it for about a month. The first thing we’ll say about the SG we tested is that the solid Sedona Orange paint scheme was beautiful. It had a deep rich hue in the shade or dark lighting, but then when the sun hit it, the orange shimmered as mini specs and flakes reflected the sun’s rays. Aside from the PowerPak upgrade, which we identified right away by the 103 badges on the air cleaner and primary cover, for 2011 H-D made some slight changes to the Street Glide. Gone is the 2-into-1 exhaust system that was found on the previous year’s SG and Road Glide models. For 2011 both models feature the 2-into-2 under slung exhaust system found on the other touring bikes. According to H-D this change came due to feedback from customers and dealers as it was much more costly for customers to switch their 2-into-1 system to a 2-into-2. Another change is a new sculpted seat that has been reshaped for better styling and comfort.

When testing a bike there are some things that don’t take a month for you to realize; you pretty much figure them out right away. For example, with the Street Glide we noticed within the first 50-mile commute from home to the office that we really aren’t fans of the new seat design. Sure it’s narrower up front which made it easier for those of us with shorter inseams to place our feet flat on the ground for more stability at stops, but we felt like we were right on top of the tank. And while the rear of the seat has a new profile that’s supposed to provide better lower back support, we found that the seat dug into our lower back/butt and was rather uncomfortable, especially on really long rides.

We were able to take our minds off the pressure of the seat by simply twisting the throttle and enjoying the fun factor of the 103. Sure it won’t give you whiplash on hard launches, but let it wind up above 3,200 rpm and the engine just loves to show off and prove what it can do. Loaded up with gear or even riding two-up with gear the 103 has no problem putting big rigs and slower moving vehicles in their place—in the rear-view mirror. Even when you slip it into Sixth gear and cruise down the freeway, the mill still has plenty of power to make a move without hesitation. Of course it’s not the same as the CVO 110 but definitely noticeable over the stock 96. Speaking of gears, the Cruise-Drive six-speed smoothly shifted from gear to gear. The incorporation of the Isolated Drive System helped to reduce overall noise and vibration making for a pleasant ride.

One thing we noticed with the PowerPak, is that with the extra power between our legs and the pulsating of the ABS when in need, we often found ourselves pushing the bike a little harder in the turns and generally getting to our destinations a little quicker. The single spar, rigid backbone frame and swingarm with its deep drawn shell and forged pivot section adequately handled all the twists and turns we through at it. Even when we dipped into the SG’s 32-degree right side and 29-degree left side lean angles, from front to rear the bike rode out of the turns without much feedback. While we like to think we’ve gotten used to H-D’s ABS system by now, it still piques our attention when digging deep into the brakes and we feel the pulsing sensation of the ABS kicking in and doing its job.

Aside from the PowerPak, new seat, and dual exhaust, our Street Glide was outfitted with everything else you’d get on a base model SG; 18-inch front, 16-inch rear black slotted cast aluminum wheels, Streamliner floorboards, brake pedal, and passenger pegs, and Harman/Kardan 40-watt, two-speaker Advanced Audio System with CD/MP3 player. With its lowered stance and 2 inches of travel on the short rear air-adjustable shocks, and 4.6 inches of travel on the 41mm frontend with triple circuit damping we had no issues with the performance of the suspension. Actually most of our personal bikes are lowered so we are used to the ride quality that comes from a lowered bike.

Our month with the PowerPak’d Street Glide was really pleasant. Sure the new seat was constantly on our mind (or should we say lower back) but that could easily be fixed with a new seat or some added padding to the existing seat. With that aside, when you take into consideration that the H-D 103 kit costs $899.95 (not including labor) and the ABS/Security package costs $1,195, and for around $2,000 more than the base model SG you can get about 10 percent more torque, ABS brakes, and a security system, we think the PowerPak’d SG is a smart deal. Best of all you’ll still have plenty of cash to outfit your ride to your liking before approaching the $32,499 price tag of the 110 CVO SG. HB

BMC has teamed up with Corbin to offer ” The Wall” Custom seats for Harley-Davidson Dyna and FXR models. Customization […]