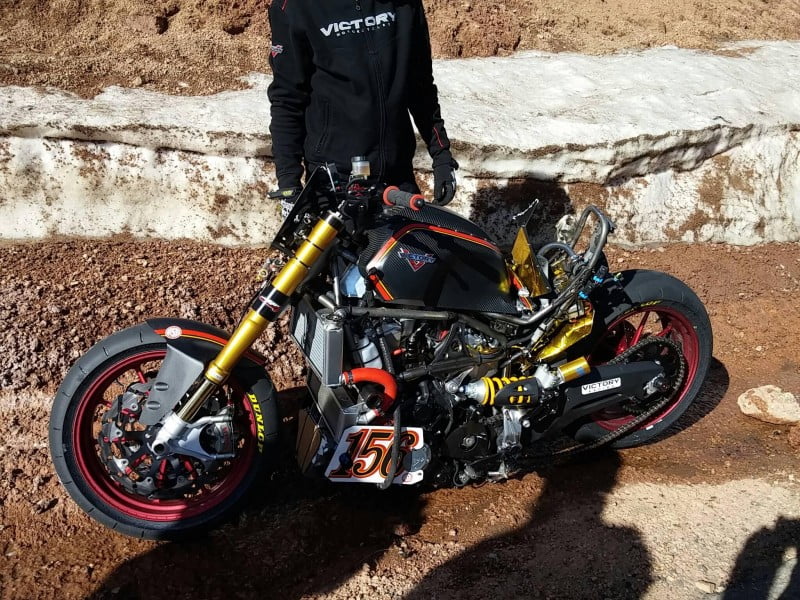 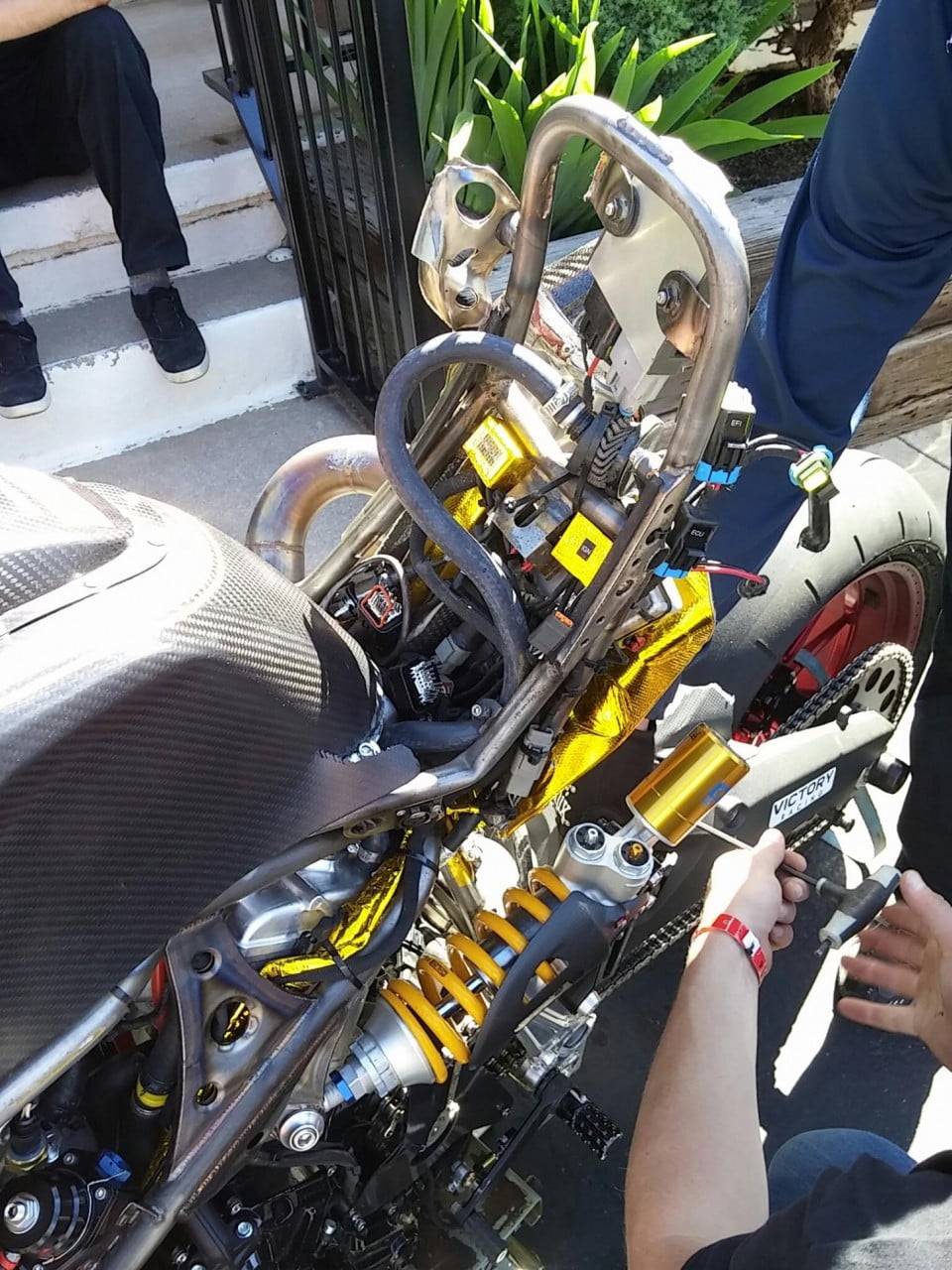 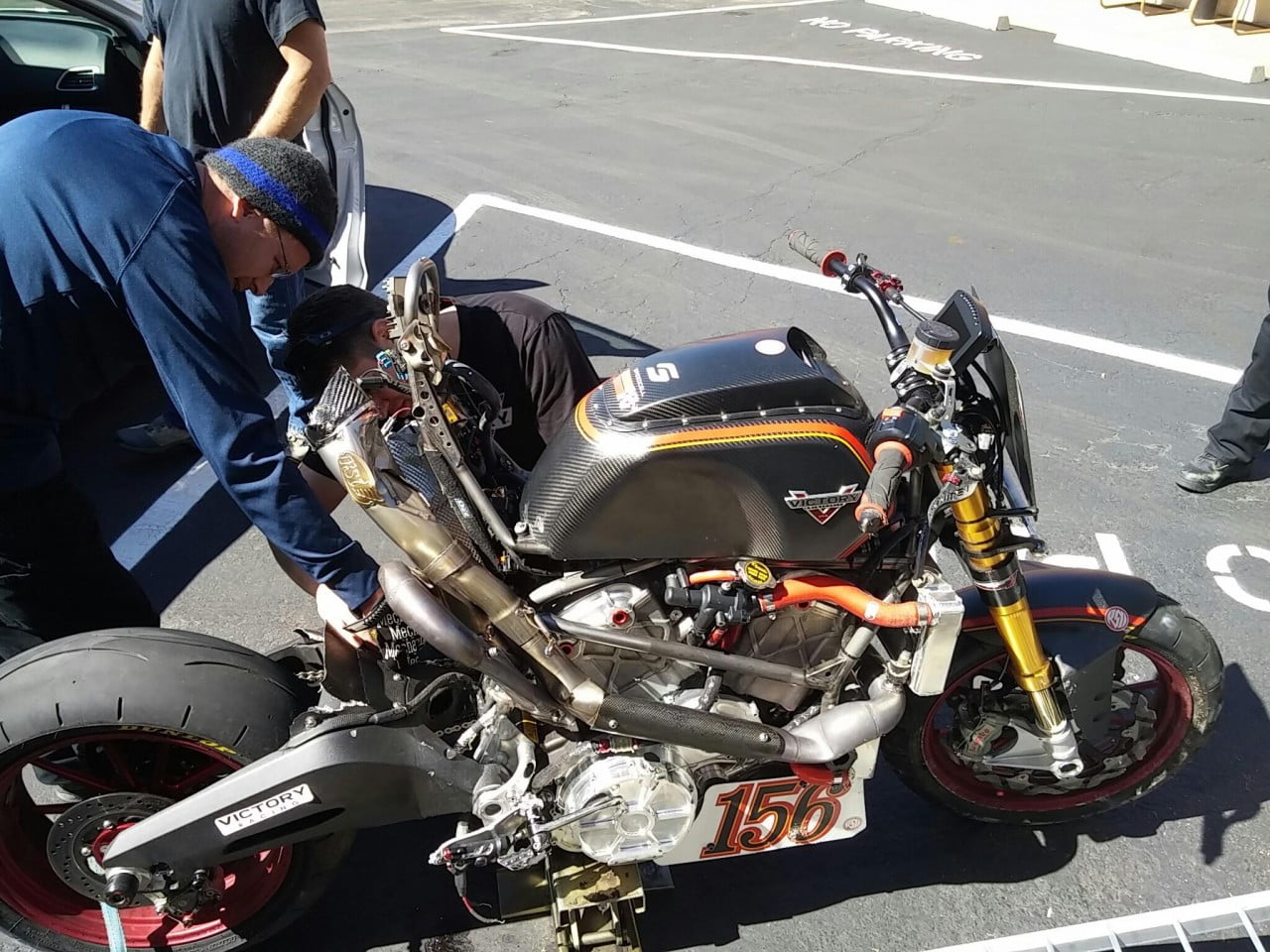 The Victory Racing Project 156 suffered a setback on Saturday June 13th in a practice accident on the Pikes Peak race course.

Cycle World Editor and Project 156 rider Don Canet did not suffer any serious injuries and was immediately up from the crash, however Project 156 was damaged enough to require a strip-down and frame straightening.

“We have been making significant progress on the engine tune of the motorcycle each time it went out and were able to start focusing on the handling aspects of the bike,” explained Canet, who knows the course well after taking third place in his debut at the Race to the Clouds last year. “As I was going up the mountain I lost the front end under braking, asphalt temperature was extremely low and, counter intuitively, I think the tyre was getting colder as the run went on.”

The Falkner-Livingston racing team kindly helped Victory to transport Project 156 back to the Roland Sands Designs (RSD) headquarters in Southern California for evaluation. “Not going to lie…” said RSD project leader Cameron Brewer, “Project 156 is really beat up. But we are racers at heart and I can promise Victory Motorcycles, Cycle World, RSD and Pikes Peak fans that we will rebuild the bike. She took one hell of a hit, but we are committed to the program.”

Victory Motorcycles General Manager Rod Krois said the first question on hearing about the crash was whether Don was OK. “When we heard that he was, that was our biggest relief. Racing is serious business and it takes commitment, planning, guts and skill to get through these situations,” he said.

“Victory Motorcycles took this endeavour on to challenge ourselves and make history by putting a competitive American bike back on Pikes Peak.”

To see the progress of the repairs to Project 156 and its return to Pikes Peak, fans can follow the story at www.CycleWorld.com, www.RolandSandsDesign.com and through the Victory Motorcycle official Facebook page www.facebook.com/victorymotorcycles.

New Toys from Harley, for your Harley

My Two Cents [email protected] As I write this column toward the end of October, I’ve been watching a lot of […]