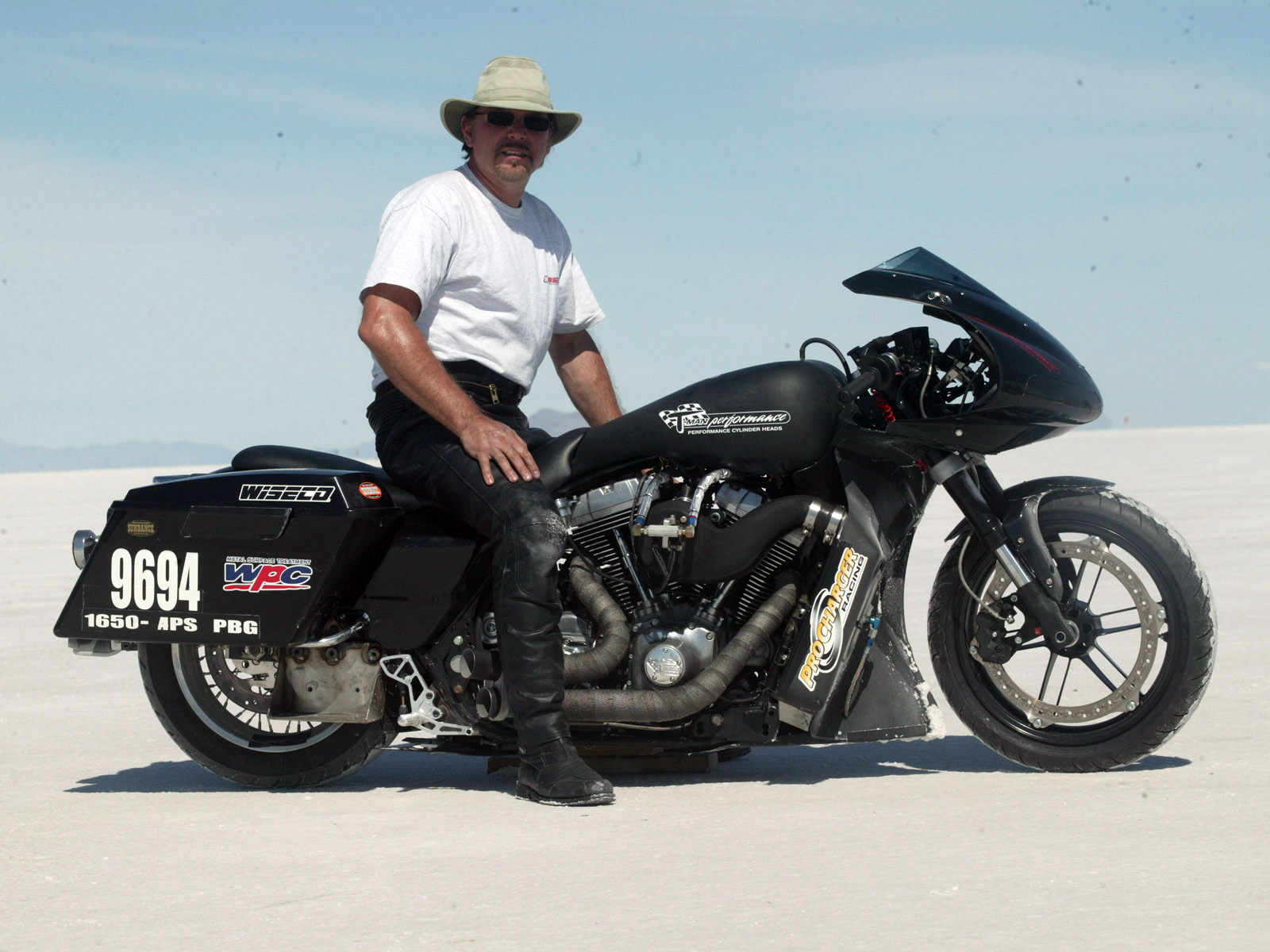 **MITCHELL, S.D. **- T.R. Reiser piloted his Bagger to a top speed of 183 mph at the recent BUB Speed Trials in Bonneville laying claim to the title of the World’s Fastest Bagger. $1500 worth of prizes and most importantly the right to claim the World’s Fastest Bagger title and Traveling Trophy belongs to T.R. Reiser of T-Man Performance and his team for 2010. The official time came at the original event that started the chase, the BUB Speed Trials sanctioned by the AMA, held at the legendary Bonneville Salt Flats and sponsored by S&S; Cycle, ProCharger and Klock Werks. The WFB Traveling Trophy award was decided hands down as the T-Man team recorded a two-way average speed of 179.88 mph in the 1650 APS-PG class and a top one-way pass of a staggering 183.779 mph to secure the WFB title for this season.

The WFB award is now in its fifth year. It was originally created following the Discovery Channel Biker Build-Off efforts of Laura Klock and Klock Werks’ original World’s Fastest Bagger. The award is presented to the fastest one-way pass documented by the steward’s time slip at the BUB Speed Trials, a motorcycle only event held in September each year. The history of Bonneville as one of legends in the speed world is a fitting place for bikes of all kinds. It is with the recent custom Bagger trend that the attention has focused on taking something not necessarily the most aerodynamic and pushing the limits of speed and stability on what has been tagged the great white dyno.

The T-Man team finished second to the team from Rivas V-Twin in the 2009 season with a top speed of 158 mph, so the question of course was with the win and incredible top speed, what’s next as he was presented the award. “200 mph on a Bagger is within reach and we hope to achieve that goal with our new motor and more experience,” T.R. Reiser said, “I am very proud of our team and sponsors. This is such a different surface and experience than any other racing, it’s an honor to have posted 183 mph and take home the title to North Carolina. It was even more special as my parents and wife were able to attend.”

The WFB entrant brought to the salt by the T-Man Performance team was powered by a 98″ Twin Cam motor with a ProCharger (forced) induction system. The 2006 Harley Davidson FLH bike featured Revolution Cylinders, T-Man Stage 4 Heads and TR662-2 cams, a JIMS Fat 5 Transmission, Wiseco Pistons, AIM Clutch, Horsepower Inc. throttle body, Glide Pro stabilizer, WPC metal treatment, Sundance Chain, and Tech Starter. It was tuned by Brian Kochanski of T-Man Performance using a Daytona Twin Tec module. The bike was also sponsored by Harley Davidson of Lynchburg as well as those listed above. The frame was stock with a neck angle modification and a Buell 1125R Front End. It retained stock saddlebags and seat location. For more details go to www.tmanperformance.com.

Other competitors for 2010 that registered were Chris Rivas and Rich Joos, more on them can be viewed at www.worldsfastestbagger.com, as well as information on the rewards and rules. The 7-mile salt course requires the bikes to be held at top speed for almost 2 miles to get the one-mile average to equal out. “Much talk surrounds the title but this is where it started and will continue to be the original,” said Laura Klock. “All of the entrants are to be commended on their efforts as it’s never as easy as one might think. We may look at going to a Pro Class and an Amateur or Stock class next year. We will be taking any input from everyone in the bagger industry, so let us know your thoughts. There have been ideas such as a power tour type of setting that would require a ride and then race class as well. Bonneville is certainly the mecca of speed and we would encourage anyone to come out to experience it in any way they can. Better parts, better motorcycles and the BEST camaraderie are always products of Bonneville.”

You don’t have to set a record to win the World’s Fastest Bagger title. Klock Werks set it up so that your fastest one way pass is what gets entered. The salt is an amazing creation of which the track and conditions can vary hour to hour so any speed can potentially win any year. The speeds were below the 150 mph mark until the final two days this season.

More information on all the sponsors and the award can be found at www.sscycle.com, www.procharger.com, www.kustombaggers.com and of course www.worldsfastestbagger.com

It’s not easy being big H-D. Face it. It’s the premier brand in the motorcycle industry—not only in the US […]

The pole needs to be as long as the fork tubes so you can generate a little force. Words: Chip […]