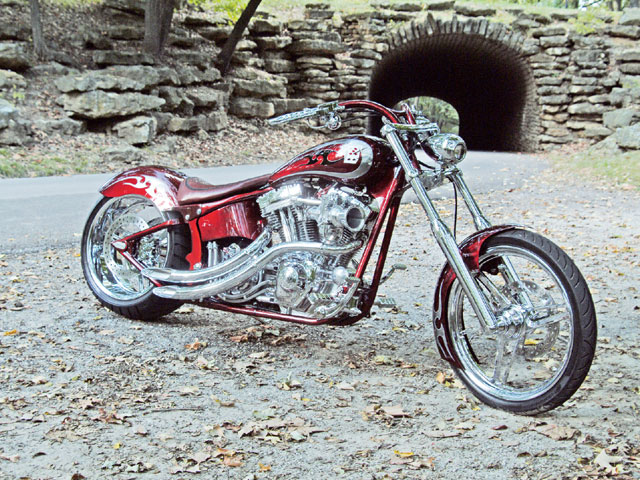 As a young boy, Clay McCreary added a creative touch to everything he had, including customizing his bicycle with a sissy bar, a long set of forks, and lights. As time went on and his artistic skills progressed, he toyed with the idea of working for a major greeting card company. But the universe had other plans. As it turned out, Clay’s parents, Susie and Dewey, owned and operated the St. Joe Harley-Davidson dealership. They had been running the St. Joseph, MO, location since 1969, weathering the lean times in the MOCO’s history.

In 1981, while still in high school, Clay began working at the shop. At first he washed bikes, then over the years progressed to working as a mechanic, handling parts and sales, and eventually, with his brother Mick, running the dealership. Thanks to Dewey’s earlier days as a machinist, he imparted his metalworking knowledge to Clay. Aside from Clay’s dealership duties, he was always thinking about designing and building custom motorcycles, always using genuine H-D motors, frames, and parts.

Clay wanted to build a special-construction modern H-D, so he ordered an ’05 Softail Standard for the donor parts he wanted. When the new FXST arrived, Clay noticed the VIN digits were “777” followed by two fours: a full house in poker lingo. It seemed as if the fate of this machine was set, right from Milwaukee-and the Casino bike was born. Rooster, the service department manager, tore down the bike, keeping only the frame, motor, and transmission. The rest of the parts were sold. Before anything else, the balanced Twin Cam motor was polished, then breathed on a bit by punching it out to 95 inches. The Screamin’ Eagle plugs were installed into the turned, round H-D cylinders, while a set of torquey Woods TW-400G cams was added. Induction occurs through a Mikuni carb breathing through a Choppers Inc. velocity stack, while spent gasses escape through some Martin Bros. shorty pipes.

Sheetmetal for the project was sourced from three different aftermarket companies, with the gas tank being built to spec by Independent Gas Tank Company. The painted parts were meticulously prepared for the grind effects Clay was after. After scuffing up the metal, seven coats of candy paint were applied over the bare sheetmetal. This technique allows the sun to catch the underlying metal through the translucent red paint, giving the bike a brilliant glow. For the Casino theme, dice and playing cards were added all over the bike. The tank sports the aforementioned three lucky 7s, with a bar and shield used instead of hearts or spades. The CNC-machined footpegs and shifter look like dice, which were also painted on the fenders, while the pop-up gas cap was painted to resemble a playing chip.

Clay is really happy with how the Casino bike turned out, since he’s gotten such a positive response from the riding public. He especially loves the fact that this 250mm-tired Softail, with custom parts galore, is still an official pink-slipped Harley-Davidson.

The multi tool has come to save us all. From hangnails to emergency roadside brake jobs, these handheld devices are […]

Bell has went back to the lab to make improvements to an already great helmet, the legendary Custom 500. A […]

The Best French Press For Any Coffee Drinker