A 2006 Harley-Davidson Softail That’s Green To The Max

Editor’s Note: This story originally ran in the Hot Bike August 2013 issue.
Born and raised in the City of Commerce, California, I grew up admiring the lowriders in SoCal. I started attending car shows when I was in high school. I also did my share of customizing Chevy Impalas. But for a long time I wanted to ride a motorcycle. My longtime friend Rick was looking to purchase a Harley-Davidson, and I told him if he purchased a Harley, I would get one also. He purchased his in February of 2006 and I purchased mine in April of 2006.

The bike was completely stock when I purchased it at Los Angeles Harley-Davidson. At about 350 miles and a month later, I tore it down in my garage. I had never worked on a motorcycle, but being an automotive technician at a dealership, I thought to myself, “How hard can it be?”

It was not until 2008 that I really began to transform it. I changed the wheels for custom-made billet wheels, rotors, and pulley. I told my brother Ruben I wanted to paint it. I wanted something that would stand out, not just something black. I chose Candy Green, and Ruben painted it in my garage. When he was done, I took it to the sun and thought the color was a bit too dark, so we stripped it down and started again. I went with a brighter shade of green and added some metalflake for extra pop. My Harley and all the parts that are Candy-painted were done in the garage or in the driveway—no shop or fancy spray booth. Wanting some silver leafing and pinstriping, I met with Edgar, from Maxima Imagen, who was doing work out of his home. He did the silver leaf and pinstriped it for me. I disassembled the top end of the engine and had it polished. On one of my days off, I drove to Henderson, Nevada, where I had the barrels and heads diamond cut all in one day. I rode it like that for a while. I took it to several shows and it won awards, but I wanted something more unique, something that was an eye-catcher. That is where I came up for the nickname “Eyecandy” for my bike. 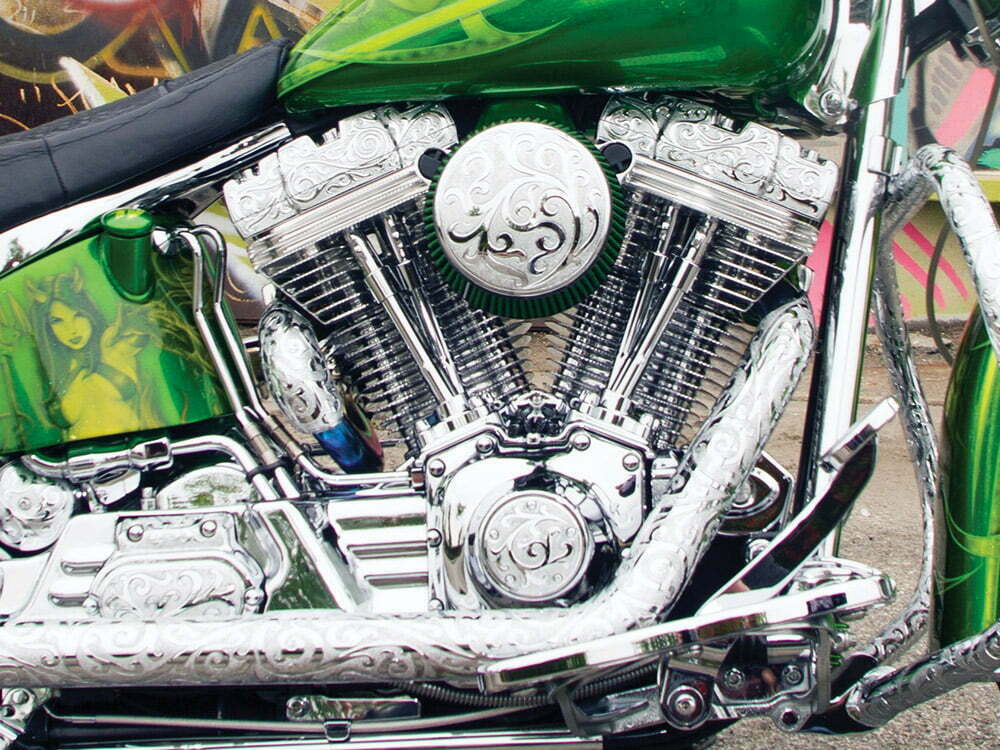 In 2010, I tore it down once again, practically to the frame. I developed a vision in my head of how I wanted it to look. I looked at pictures and envisioned it. I had Ruben paint my wheels, handlebars, oil bag, and many other parts. I went back to Edgar when I decided on some murals. Every part that is painted has murals, pinstriping, or leafing. Not one painted part is plain Green Candy. Edgar added some pearl throughout the paint to give the murals a sparkle in the sun. I continued to attend car show and bike shows. A few bikes had engravings on them. Miguel Chavez striped the chrome off a bunch of parts, then had them hand-engraved and triple plate show-chromed again. I tried to balance the Candy-painted parts, engravings, and chrome throughout the bike to give it a balanced look.

Home Depot doesn’t carry as much greenery as Jesus Rendon’s bike. He has his brother Ruben to thank for that.

Although projects are never done, for now I am content with it. I’ve taken it to several shows and won an award at just about every one. It is time to ride it more. I never stopped riding it, and I vowed that no matter how far I took it, I would always ride it. I have no problem riding it in the street or freeway at any speed.

I want give thanks to my girlfriend Elizabeth, for her support. My daughter Vanessa, for being a good kid who allows me to do what I enjoy. I hope my next daughter, Sofia, is the same way. Special thanks to my brother Ruben, for using his painting skills on my Harley. Thanks to Miguel Chavez for all the engraving. Thanks to Edgar Rodriguez for using his talents on my paint. Thanks to Sergio Herrera and the entire Metal Finishing Inc. staff for their hard work with all the chrome. 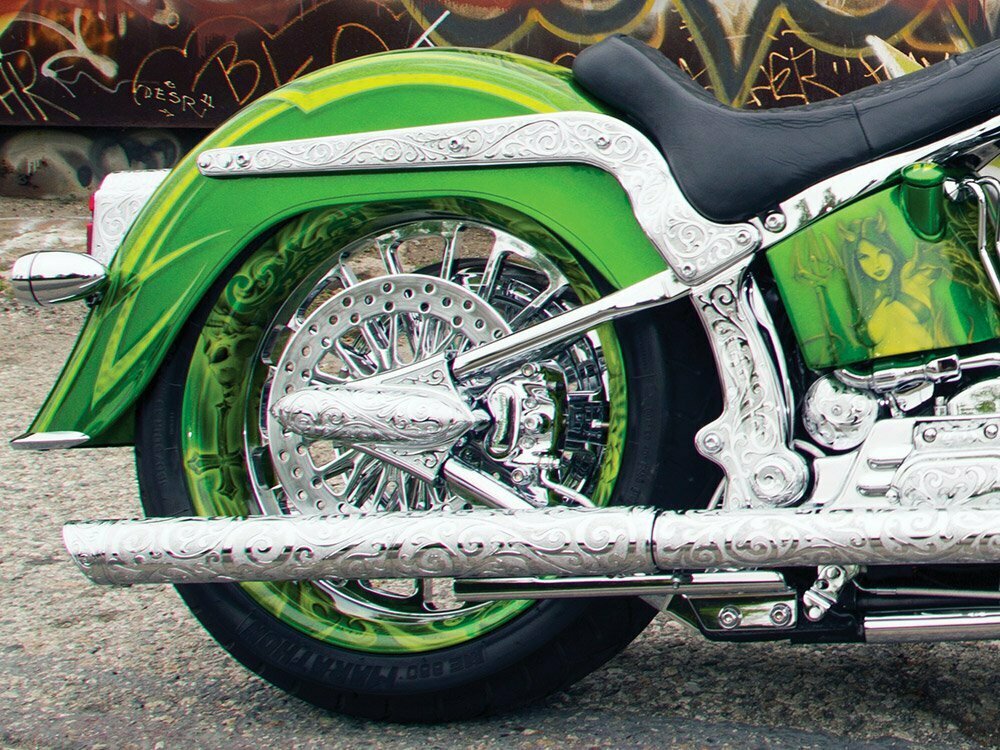 Miguel Chavez Custom Engraving worked its magic throughout this beauty, nose to tail. 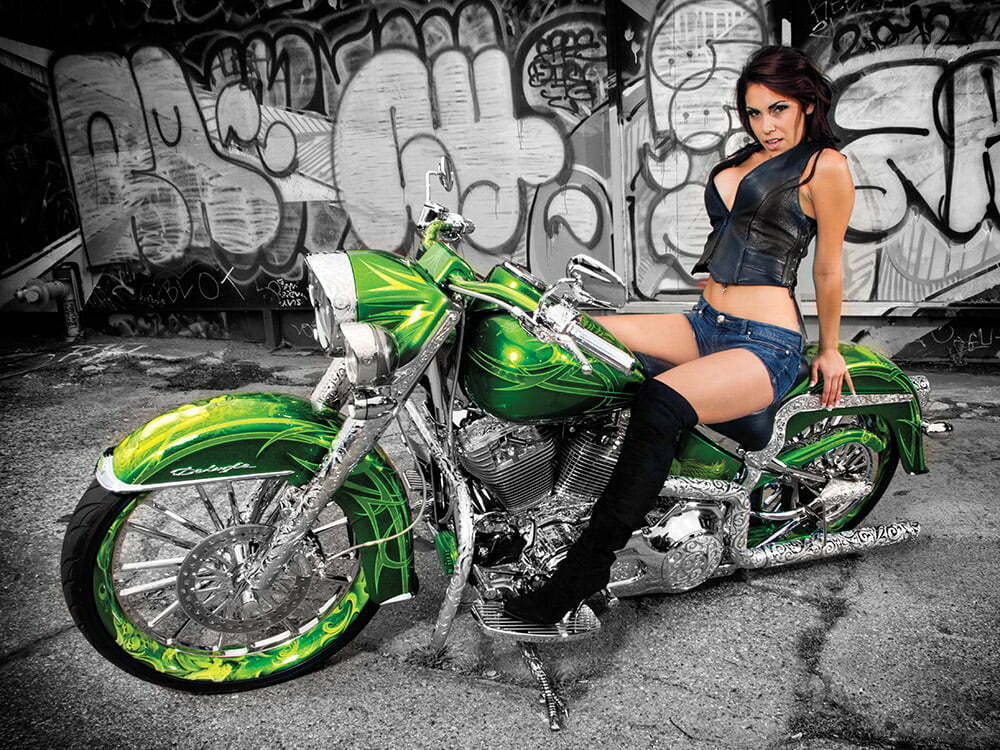 Which is easier on the eyes—the 2006 Softail Deluxe or model Chelsie Farah adorning it? 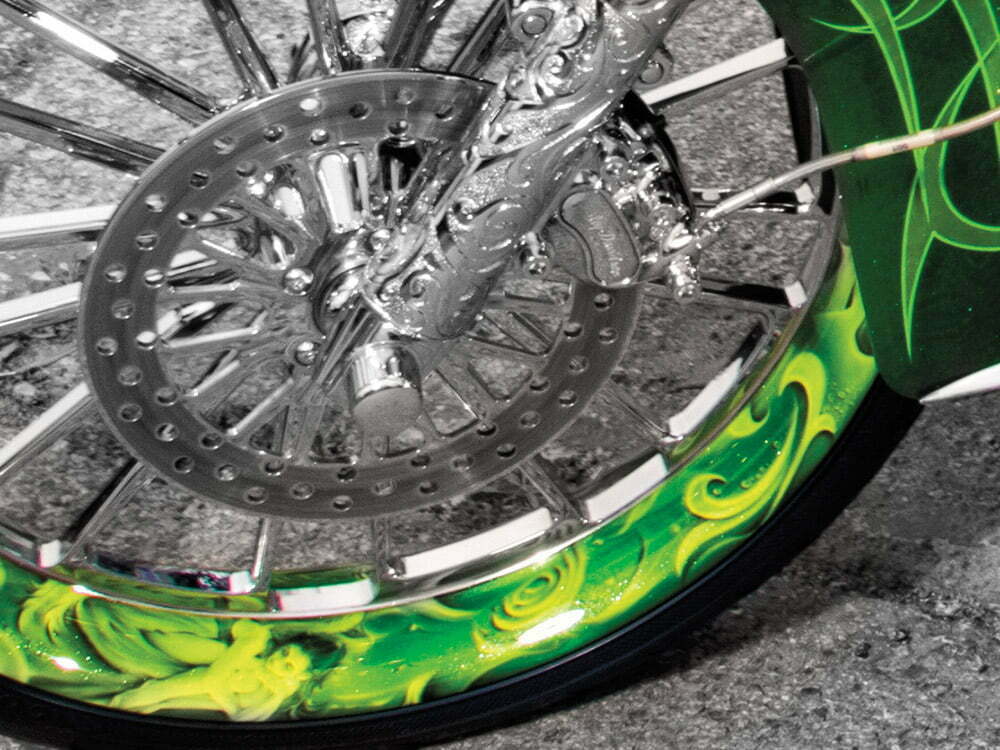 Beauty is in the eye of the beholder, and these rims be holding some seriously intricate detail.

02. The first step Larry the Wrench performed was removing the seat and negative battery connection and lifting the gas […]