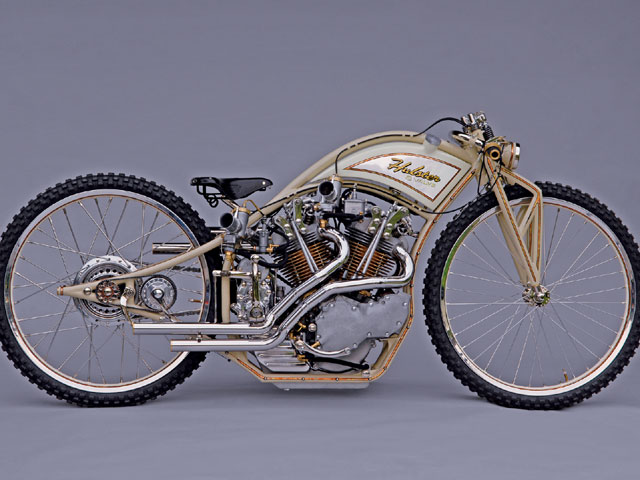 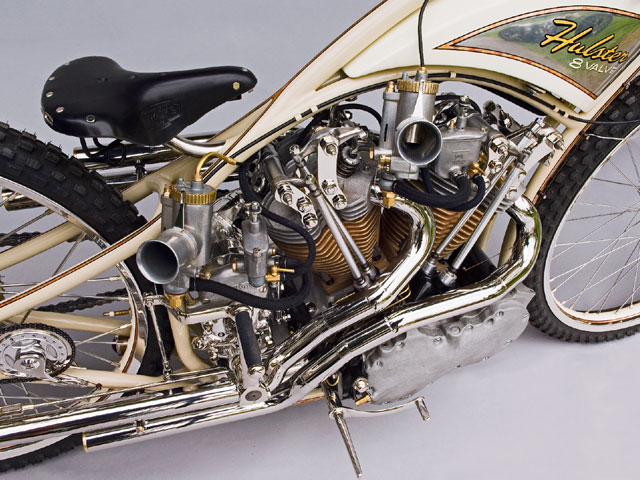 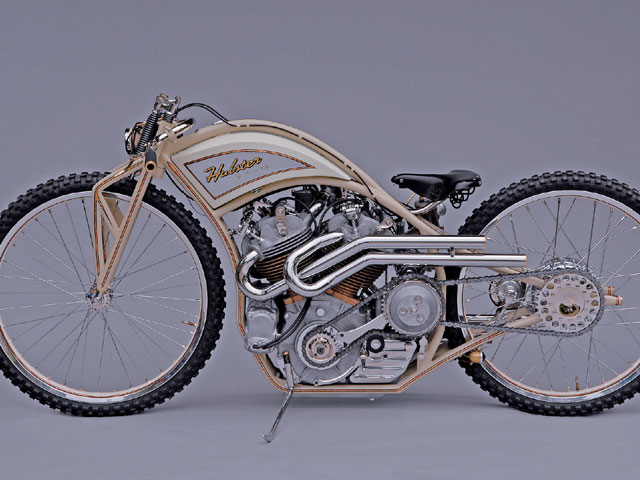 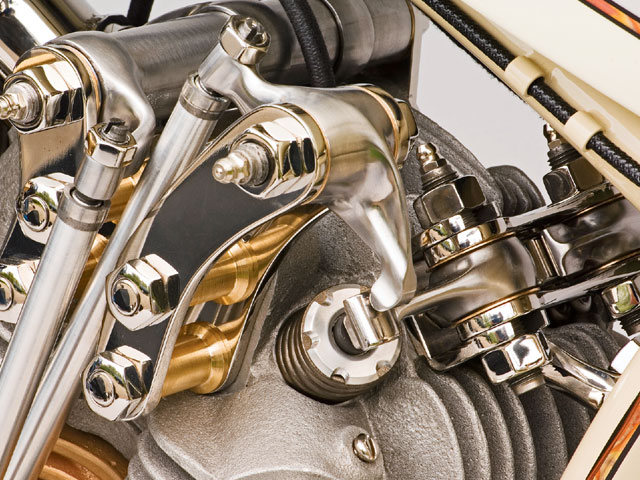 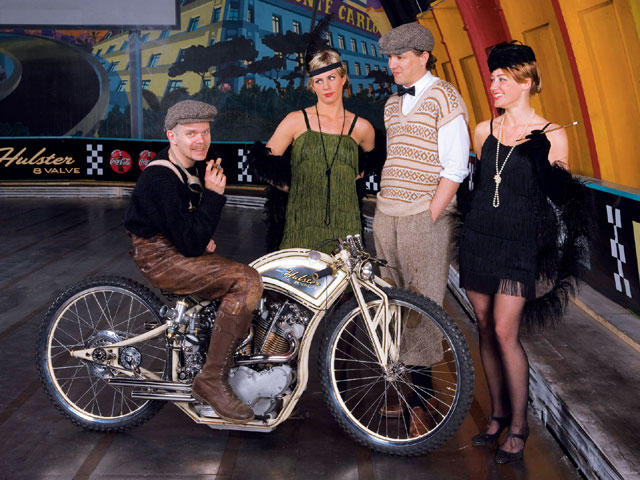 Dead man’s grip: if the bike doesn’t kill you, the woman might. 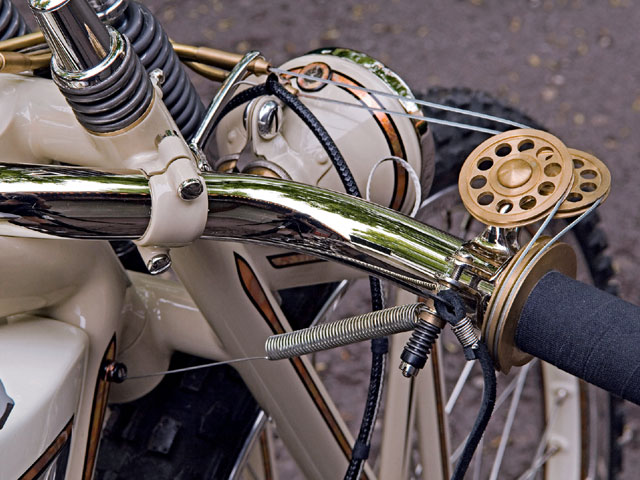 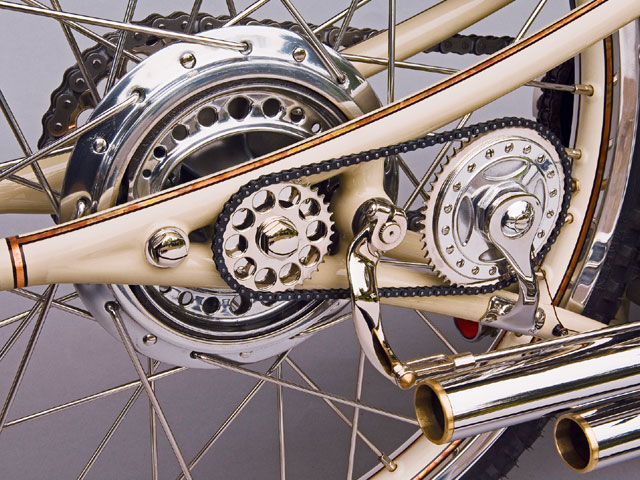 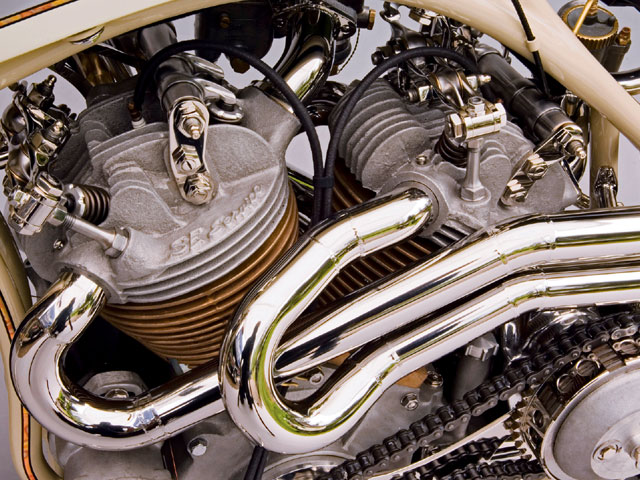 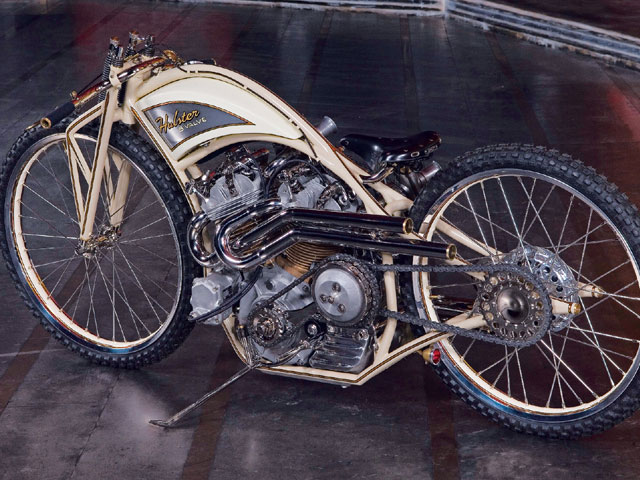 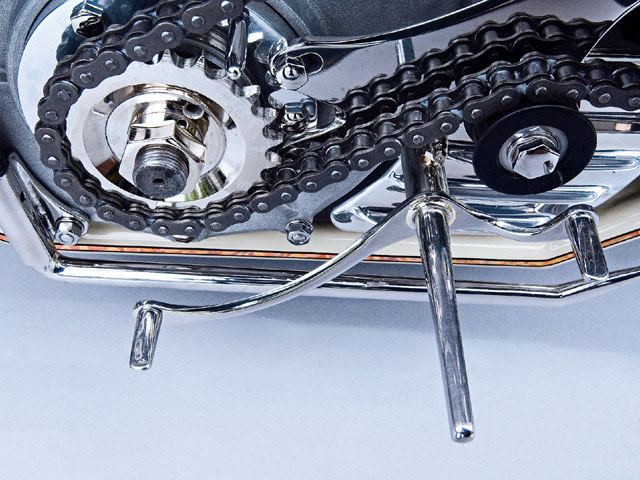 Rear wheel-driven alternator: stop and the lights go out.

_While the majority of the American custom motorcycle scene is still infatuated with the long, low, drop-seat, super-wide tire, heavy-on-the-sheetmetal style of bike (not that there’s anything wrong with that), there’s been a small group of builders going old school. No, we’re not talking ’50s-’70s bobbers and choppers old school. We’re talking 1916-1934 boardtracker/speedway racer old school. This olde-tyme, racing-inspired style of bike isn’t just an American trend, though-it’s been quietly burning overseas as well. And we were lucky enough to catch one such creation from former Swedish Speedway racer turned bike builder Stellan Egeland of SE Service.

After nearly running away with the top spot at the ’06 AMD Official World Championships of Custom Bike Building in Sturgis last year, Stellan began planning an exceptionally mechanical machine that would hopefully crown him the ’07 AMD World Champion. Communicating via email, we were able to get Stellan’s story of how this very technically engineered Speedway bike came to be._

As soon as I came back to the motel room in Hill City, SD, after placing third in the 2006 AMD World Championship in Sturgis with my bike “Esox Lucius,” I started thinking about my next bike. I have always been a fan of Speedway bikes as I had a short career in that sport (often ending up at the hospital). One of the ideas that I had was to build a Speedway bike that looked like it was from the ’20s or ’30s. Editor’s note: In 1934 Harley came out with the light and spindly CAC Speedway Racer, a 500cc single cylinder machine with no brakes or clutch, a 16.5:1 compression ratio, and 6,000 rpm rev limit-perfect for pitching into tight turns on oval dirt tracks.

Since I love mechanical stuff and being able to look at a machine where you can see how everything works, I wanted to build a bike with as many parts exposed as possible. When I came home to Sweden I got a phone call from a guy named Thomas Grandell, who said he saw my bike in a magazine and just loved it. He said he had the same type of headlight that I used on the bike and he wanted to give it to me.

He came by to give me the headlight and we were talking bikes for a while. Thomas said his father had a lot of old cylinder heads with open valve arrangements, and if I wanted to we could go and have a look at them.

We went to his father, and he had a lot of old British bikes. We decided to cast our own set of heads with one of his heads as a reference. I made a template from bondo and went to the foundry. When I got my castings they had no cooling fins and no channels. Thomas milled the fins pretty rough, and I grinded them until they were conical like cooling fins should be. Next, I drilled the channels and ported them.

The rocker arms were cut from 15mm thick sheetmetal of a material called Weldox (an extra-high strength structural steel) with a waterjet machine, then I grinded them with a handheld belt sander until they looked the way I wanted. Of course, I knew that it was possible to get them milled to a finished product, but that was way out of my budget.

There are three exhaust rockers on each head since the exhaust valves are pointed 45 degrees away from each other, so the valve system is a pretty impressive sight when the engine is running. Each head also has two exhaust pipes, one on the left side and on the right side of the bike. Next came the cylinders. Since I wanted the engine parts to look cast with the roughness and casting irregularities as they had back then, machining them from billet was out of the question. I bought a big piece of plastic and machined it to a template and asked the foundry to cast it in bronze. After that, I had my friend Mats Appelgren put steel liners in the cylinders and seat rings and install the valve guides in the heads.

Since the lifters would lose the oil supply from the pushrod tubes with the open valve arrangement, I made some tiny oil tubes that run directly into the lifter blocks.

When all that was done, I took all the cast parts to a guy who ball-peened them to get the cast look on the grinded areas. The carburetors of choice are a pair of Amal GP2 carbs with matchbox float cambers, and believe it or not, they work great!

Due to the fact that I wanted to keep this bike as short as possible, I needed a short transmission from the desired time era. I fell for a Norton transmission from the ’30s-it’s short and it looks really good. The clutch needed to be the same height on the bike as the rear sprocket, which caused me some trouble when I was designing the engine and transmission mount. I came up with the idea to make an oil tank that incorporates the rear engine mount and the lower transmission mount. The oil tank follows the engine block all the way under to the front of the engine where the oil supply line is attached. The upper transmission mount is attached to no less than four places on the frame to keep it solid so that it won’t flex when you are jumping on the kickstarter.

Before I started building the frame I spoke to my friend Michael Hallgren, who is a designer, and I asked him to make a drawing from my ideas. He helped me with the design of Esox Lucius and we work very well together. After he was done with his drawings we made a full size copy of it, and I pretty much bent the tubes from that.

I love bikes that look over-engined, and I wanted to keep the frame and forks as narrow as possible. To keep the rear of the frame skinny, I put the chain sprocket on the outside of the frame.

The rear hub has female splines all the way through, and the shaft on the sprocket flange has male splines. The wheel bearings had to end up in the frame, of course. The frontend is inspired from old Speedway bikes, except for the pushing springs hidden inside the fork; it has drawing springs up by the triple trees and you can adjust the tension on two knurled nuts. The reinforcement on the fork is also something inspired from back then, but they used tiny solid round bars. Instead, I wanted it with profile tubes to get a nice line where the frame and frontend meet each other when looking at the bike from the side, but still looked skinny from the front.

To get the right dirt track/Speedway look I needed to have a magneto where the generator usually sits, so I made a chain drive inside the register cover to get the right gear ratio for the magneto. As it is a street bike, I needed a power supply for the lights, and with the generator in the trash can I had to figure out a way to get some electricity. My colleague Drusse always has a lot of weird ideas, so he came up with the idea of the alternator driven by the rear wheel-when you stop, the lights go out.

The wiring is solid copper core without any isolation that is wrapped around small knobs all the way to the lights. As with all Speedway bikes, it has a kill switch that you put around your wrist to shortcut the mag when you fall off (I don’t know what you call this device; we call it “dead man’s grip” in Sweden).

I paid a lot of attention to the details on this bike-every part has a lot of thought behind it. All the bolts were rounded, grinded, and polished to give a feel of an old exclusive machine, kind of like a company would do on a concept motorcycle.I have run the bike only once, and I will run it to an upcoming show here in Sweden, but after that I won’t start it until after the championship. It is really fun to ride, it turns fast, and is really light between your legs.

Since I have to work in the daytime to make a living, I built this bike after work and on the weekends. I have spent more than 889 hours in the shop, and the last three months I worked from 4 p.m. to 3 a.m. every night on weeknights and from 10 a.m. to 3 a.m. on the weekends. Do I have to tell you that my wife is the best? The main reason why I built this bike is to compete in the World Championships and to promote my business. When the championship is over I will start using it if nobody gives me a good offer.

Later an more email came in from Stellan informing us he had just come from a custom bike show in Sweden (the biggest bike show in northern Europe) where he won People’s Choice, Classic Custom Class, and the Scandinavian Championship.

The Barebacks are designed to securely lock the saddlebags in place. The male attachment (A) replaces your stock fender bolts, […]

The Fall months tend to be upgrade season for some of us motorcycle folks. Whether you’re motorcycle is stored away […]

Win the 2011 Knucklehead from The National Motorcycle Museum