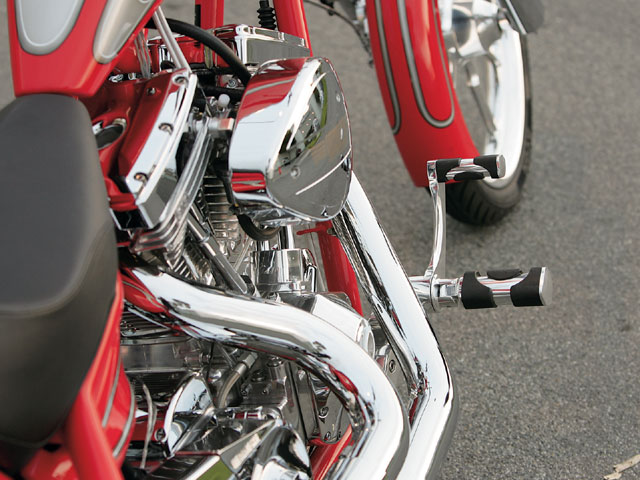 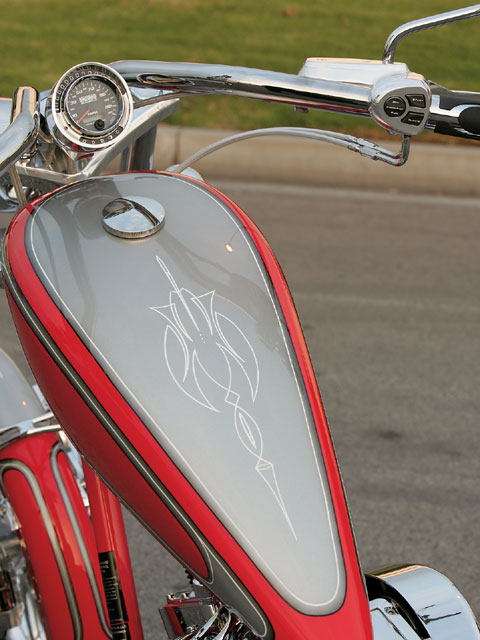 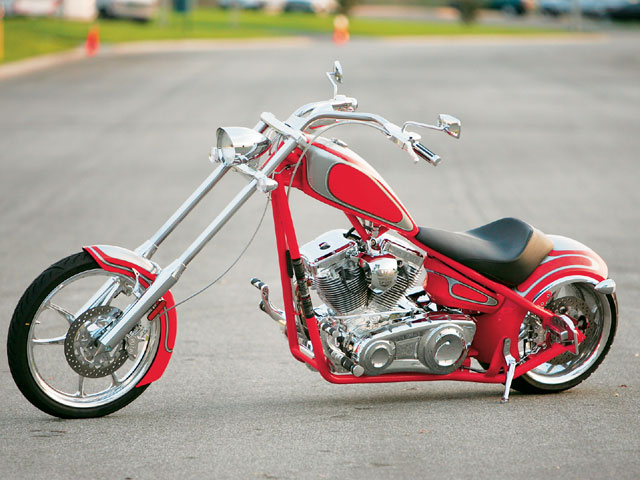 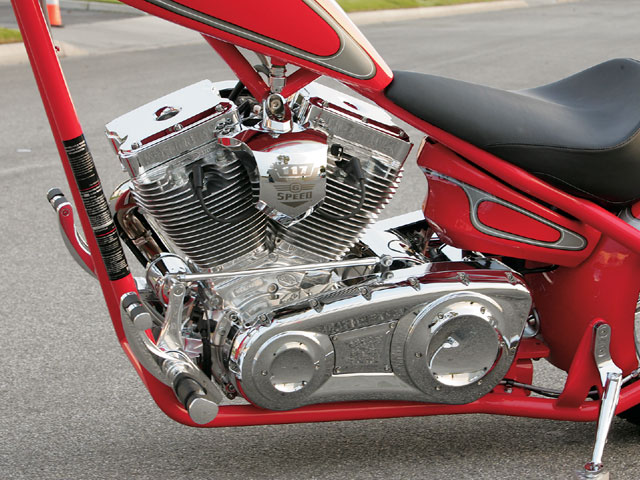 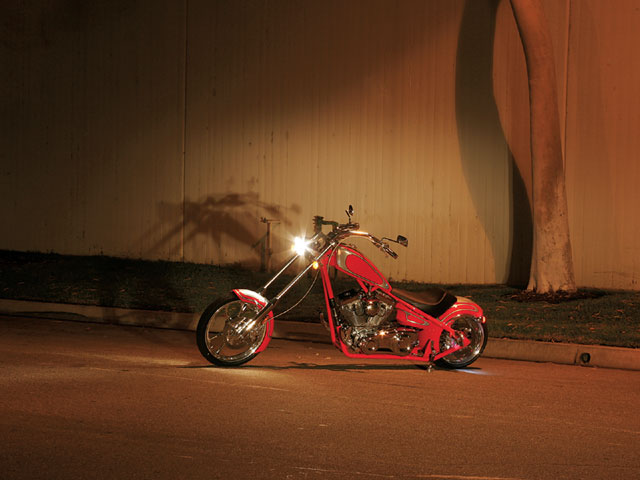 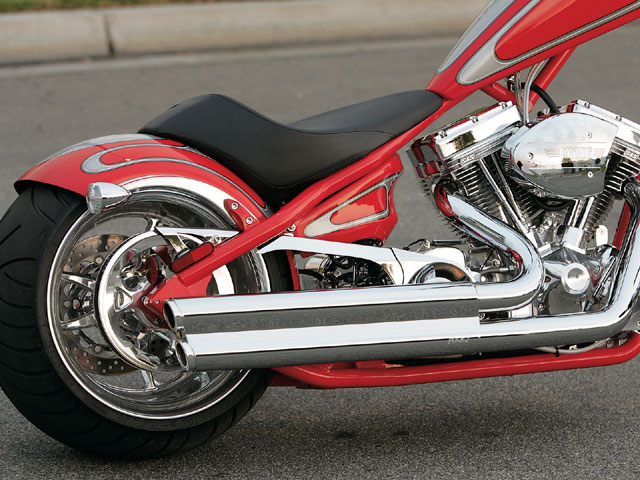 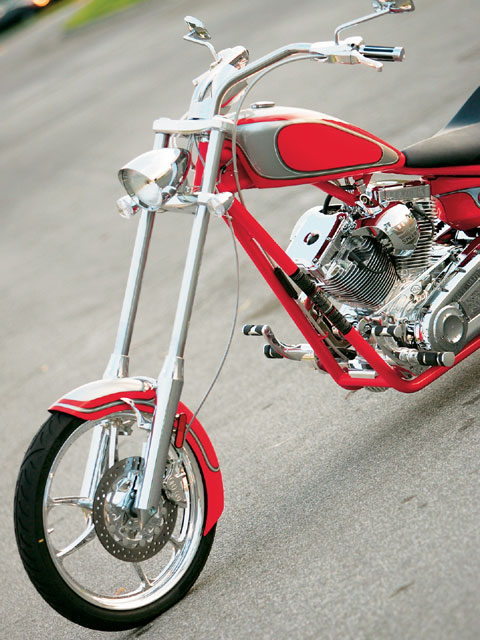 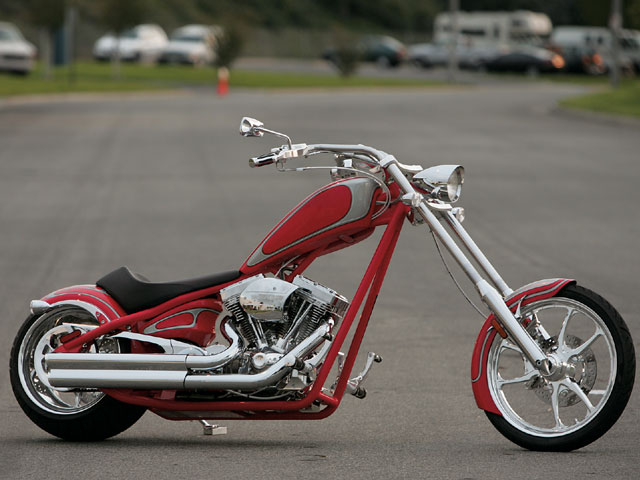 Over the course of about 10 seconds, the usually sunny Socal sky turned from a golden glow to a dim twilight, then back to bright. Everyone in the office was bewildered. Was it an unscheduled eclipse? Was the grand meteor in the sky finally making its descent upon earth? Nope, it was actually the Big Dog Motorcycles (BDM) rig unloading our latest test bike, the re-designed ’08 Ridgeback. The cause of the momentary loss of light? It appears the massive 330mm rear tire temporarily blotted out the sun as the bike rolled off the back of the truck.

OK, so maybe we’ve exaggerated here, but seeing a tire of this magnitude on a production bike is kinda jaw-dropping. Sure, we’ve seen tons of 330s and even 360mm tires on bikes before, but those were all ground-up custom show bikes; you tend to expect that kind of shock value.

Working with their widest tire to date-and the widest tire across their five-bike lineup-BDM continually pushes the limits of what people expect to see from a production motorcycle company. Actually, of all five of their models, their other new bike, the Mutt, has the smallest rear tire (a 250mm, which is still a pretty good-sized chunk of rubber).

As we glanced from front to rear, admiring its 4 inches of backbone stretch, 8 inches of downtube stretch, 41 degrees of rake total (39 in the neck and 3 more in the trees), wide load tail end, and 12-inch over frontend, we thought to ourselves, this is an extreme chopper.

Tire to tire the Ridgeback was loaded with everything we’ve come to expect from BDM: Quality components and modern styling. Everything was top-notch, from the custom designed billet wheels, 4.4-gallon tapered tank, and micro switches on the hand controls, to the 117ci S&S; motor, and proprietary six-speed BDM Balance Drive system.

One of the standout features on our bike, however, was the paint. We’ve been to the BDM production facility and know that they take great pride in the paint, as they should. They employ a huge staff of in-house painters capable of laying down everything from real flames to the wildest skull graphics to a very tame, but classy, retro panel-style paint scheme like that found on our test bike.

The HOT BIKE editors range in height from five-five to six feet and change, and after the initial start up and kick into gear, it became evident how long this bike really is and how far out the forward controls are. Jumping on the throttle in First gear pushed our 5’10” editor deep into the seat, knocking his feet off the footpegs and banging the motor off the rev limiter until he could get the tip of his foot hooked under the shifter and clicked into Second gear. A good indication of the power of the 117-incher for sure, but definitely an obstacle to overcome for the height-challenged. Luckily, the seat is thick and heavily padded, otherwise it would be very difficult for some shorter, less experienced riders to handle the bike comfortably and safely. With this experience we did notice an improvement that BDM has made across its ’08 lineup: A lighter clutch lever and smoother, more positive gear engagement.

The bike is extremely well-balanced running at higher speeds on the freeway, and didn’t pull to one side or the other as we’ve experienced with other wide-tire bikes. This is due to BDM’s Balance Drive System, which was developed in conjunction with Bert Baker of Baker Drivetrain to bring the primary and right-side-drive transmission closer to the centerline for a more balanced bike.

Being that it is a rigid, we did feel just about every inch of road traveled. But with the bike measuring in at 9 feet long, the stretched-out, 1-1/2-inch tube frame and 12-inch over frontend flexed somewhat, slightly reducing the overall impact of most bumps. One thing we forgot to try-to help smooth things out-was to take advantage of the wide rear tire and run it a little under the recommended PSI to let the tire take more of the brunt of the abuse.

Speaking of the 330 rear tire, the short rear fender really lets onlookers get an eyeful of rubber as you blast past them. Although the ultra low profile sidewall of the tire lets the 17×12-inch rear wheel gleam in all its massive glory, it still took some effort to keep the bike hooked into the turns.

The 4-piston PM calipers and 2-piece floating rotors did a decent job of slowing the rigid chopper down, even with all that rotating mass hanging in the rear. We were able to dip the bike into tight turns and lightly scrape the footpegs; however, it was usually at greatly reduced speeds, and a workout if we hit several switchbacks in a row.

Overall, the bike handled pretty well for being such an extreme chopper, and the detailed fit and finish was exactly what we’ve come to admire about BDM. If you’ve got a healthy back and aren’t intimidated by the dimensions, you can have some fun on this bike. While it’s not the most agile of bikes and it might not be the first to reach the top of a twisty mountain ride, it’ll definitely be the center of attention when it gets there. You’d be hard-pressed to find or build a ground-up custom chopper that exudes this much attitude. It has a base price of just under $30,000, and is backed by a 2-year factory warranty.

Stop sweeping the flat track podium, Indian Motorcycle Racing. It’s not gonna get any cleaner. This weekend, the Indian Wrecking […]

Mass Media – From The Editor