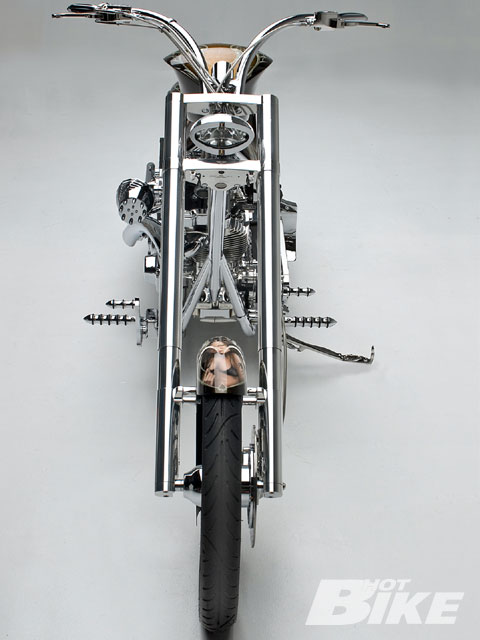 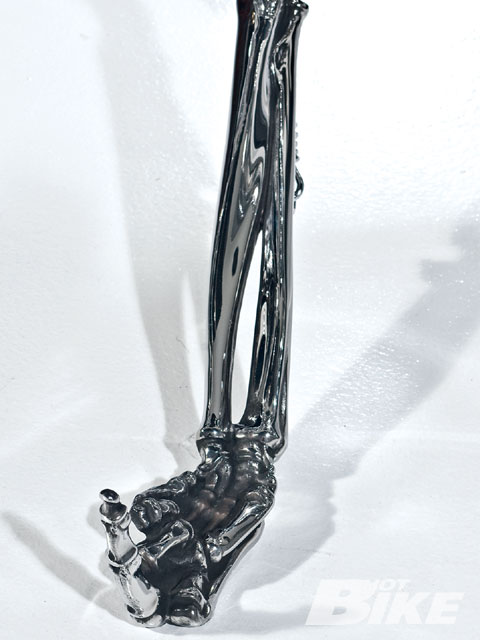 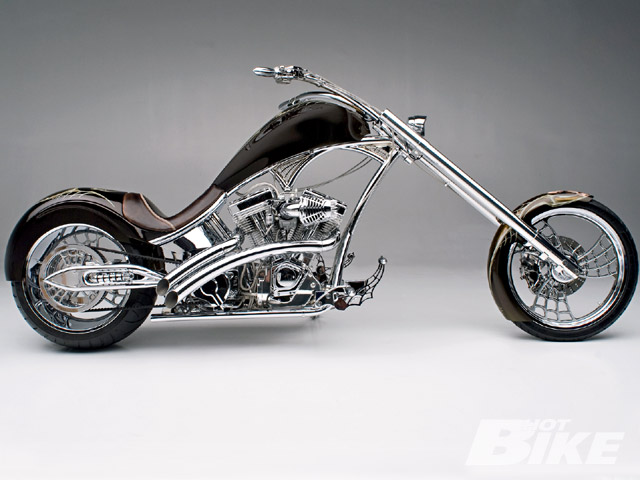 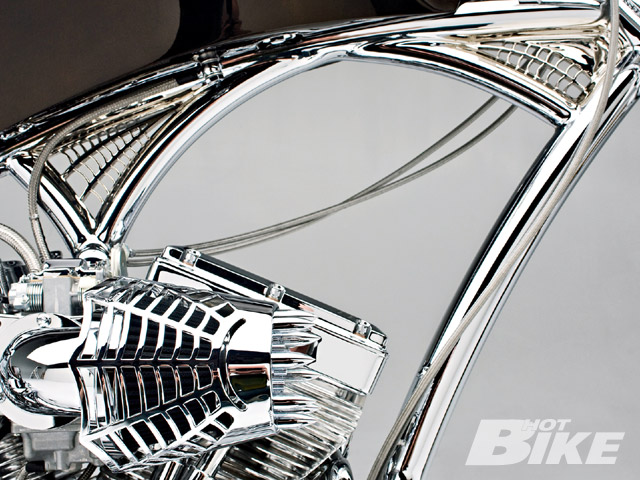 Some of the water-jetted web accents Howler Custom Cycles made. 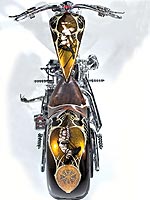 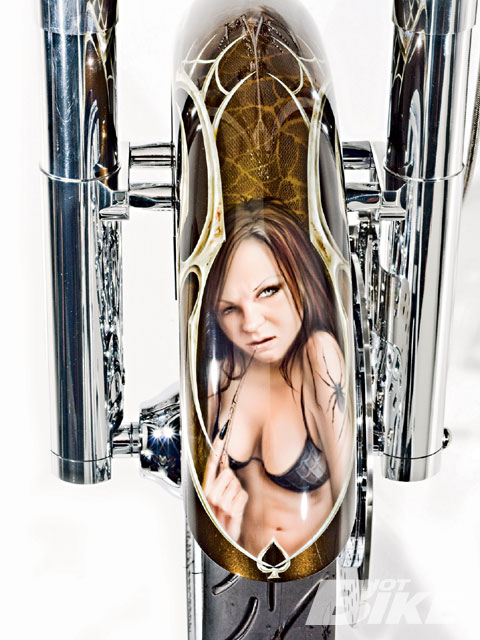 Looks like the kind of girl your pops warned you about. 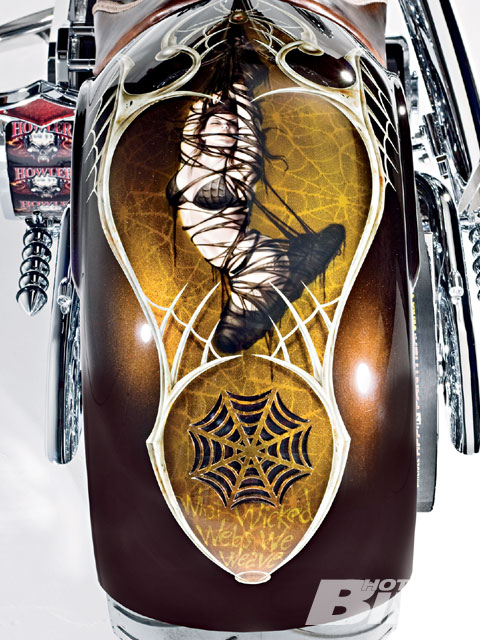 Here you can see the custom taillight frenched into the…oh what’s that a girl tangled in a web?

A few years back, Art Wierenga, of Kamsack, Saskatchewan, Canada pulled up in front of Howler Custom Cycles, (also in Kamsack) on his Springer and began checking out some of the bikes the shop had on display. Eventually the owner of the shop, John Berezowski came out and introduced himself to Art. John then gave Art a tour of the shop and introduced Art to his wife Anne, who really “runs” the shop, and his right hand man Dustin Stenhouse who helps out with offering ideas and an extra set of hands. After all the pleasantries were exchanged, Art then said to John “I need one of those,” as he pointed to a custom bike John had recently finished. John immediately grabbed a pen and some paper and they began working out all the ideas and details. Art had a few prerequisites, such as the wheels and frontend he wanted to use and he also stated everything had to have curves and the fuel tank had to have some range-no bar-hop-to-gas-stop BS. The finished bike had to be reliable and comfortable for long hauls; however, if Art could ride the bike a couple hundred miles to a bike event, wipe it down and roll away with a few trophies, well, that would just be icing on the cake. Another requirement Art had was he wanted a spider web theme incorporated into the bike, but not over done to the point that the bike looked like it just rolled out of Spiderman’s garage.

John started with a Maximum Motorcycles Softail style frame with 6 inches of backbone stretch, 4 inches added to the arched single downtube, and 42 degrees of rake. Up front John used a 14-over SJP Fat Glide frontend with 6-degree SJP trees. The bike became a roller with a set of Big Bear Choppers’ web wheels. John then had Art come over to the shop and sit on the bike so they could measure up a custom set of handlebars and get the foot controls positioned in the right place. It was at this point that Art informed John that he wanted a chrome frame to show off the backbone. So John formed the gas tank to flow with the radius of the backbone. And the best way he could make sure the tank could hold plenty of fuel while letting the backbone be shown was to mount it high on the backbone and bring the tank right up to the handlebars. They ended up with a five-gallon tank, which gave Art plenty of room to run. In the neck and motor mount areas John water-jetted some webbed gussets to fill in the empty space and beef up the frame a little more. Once he had the 120ci Ultima Motor, Baker trans and BDL primary together, John water-jetted a webbed air cleaner cover, as well as a webbed taillight/brake light. A set of Wicked Image Webbed forward controls capped off the web theme on the hard parts.

When it came the paint, Art already had a story line for the paint scheme in his head that he conveyed to Blake at Cross-Eyed Airbrushing and then let Blake run with it. The idea was to have the front fender start with an image of a “knifing bitch,” the top of the tank has her starting to get caught up in her web of lies and deceit. Then by the back fender, the spider has pretty much got her wrapped right up. Then the statement “What wicked webs we weave” under the taillight sums up the whole idea-apparently someone has some female issues.

John told us Art’s ride did pretty well at the Western Canadian Championship of Bike Building in Regina, Saskatchewan and the Kings of Customs show in Calgary. John said they want to hit more shows with the bike but it’s hard to peel Art off of it. “To us it’s the best PR any shop can get, have one of your bikes ridden into a rally 12 to 14 hours away, with the bike still looking like a show bike and the rider not pissing blood and sore,” John said. “All I know is after I put some break-in miles on the bike it was like a tug of war handing the keys over to Art.”

Bert Baker, of Baker Drivetrain, was one of the many emcees for the Biker Fusion event where more than $10,000 […]

Leo Perez grew up watching many of his friends riding old Knuckles, Pans, and Shovelheads in the neighborhood of Northeast […]