Dyna On The Dark Side

Yoda once told Luke Skywalker that the Dark Side was “quicker, easier, more seductive” than its light counterpart. I don’t think Pop’s Garage Fabrication would describe this dark horse right here as easier to build than some of its other bikes, but this bike was built for speed, and it’s probably damn fun to ride.

It’s a 2016 Harley-Davidson Dyna optimized to do what Dynas were meant to do: perform. Unlike its Softail contemporaries that were born to look like something they weren’t (hardtails), the FXD series was the rubber-mount replacement for the infamous FXR, arguably the best chassis Harley ever produced. Pop’s Garage Fabrication is centered on the idea of family and the craft involved in creating rolling, functioning works of art. They strive to build highly functional, performance-driven motorcycles that will handle whatever you throw at them, as well as stand the test of time. That’s a Dyna’s mission in life, so the choice was natural. The dark side Dyna sitting in Pop’s Garage.

The bike was purchased new from Savannah Harley-Davidson. Owner Colin McDonald traded a 2014 FLHXS, all blacked out with a badass 107 kit in it, for the FXDB. Although his trade-in was worth more than the stock Dyna, Colin put the extra money into the FXDB and did the 110-inch motor kit along with some other minor upgrades, such as the bars, exhaust, and air cleaner.

“I am from North Georgia, and we tend to ride long distance in the mountains,” Colin tells us. “I wanted something that could handle the roads here with little effort, and to have a Harley that defied the stereotype of being slow and handling poorly.” 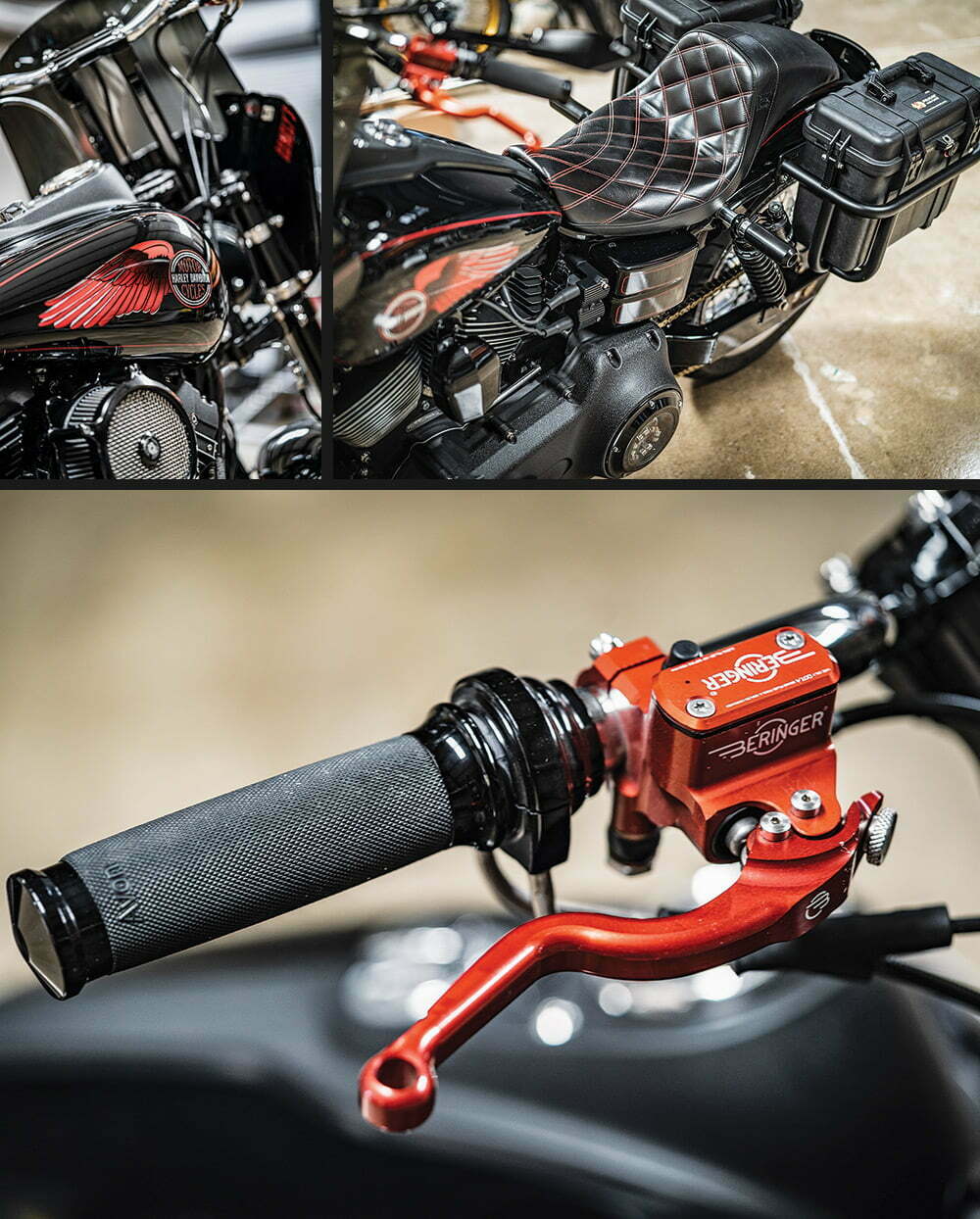 It’s all in the details. Black and red throughout, but never too much.

Later, North Ridge Cycles punched the mill out from 110 to 124 inches. Colin’s need for speed outweighed what he was getting from the original upgrade. Swapping over to Ohlins forks and shocks made for much better cornering, letting Colin take full advantage of all that newfound muscle in his motor.

“I wanted something that could handle the roads here with little effort, and to have a Harley that defied the stereotype of being slow and handling poorly.”

Not every change was of the simple bolt-on persuasion though. Installing the Kineo wheels and Roaring Toyz swingarm gave Colin a nice challenge. Fabricating the 2-into-1 stainless exhaust system took a week of the efforts of both Pop’s Garage Fabrication and Frankenwerks Fabrication to hammer out. So much for easier!

Within a year, the bike was transformed three different times, laid down twice, and has been in the hands of two independent shops and the dealership. But it was the hand of Pop’s Garage Fabrication that made it what it is today.

Beringer brakes and a GPR stabilizer are just a couple of the performance components tucked into this bad Dyna.

No matter how old you are, sibling rivalry never seems to end. Take the bike you see before you, which […]

When it comes to writing bike features, we always try to talk with owners to get the story behind the […]