New from the Baldwin Company, the 360 Brake. The 360 Brake may be small, but it has all of the stopping power needed to slow down those big-inch motors. It comes already show-quality polished. 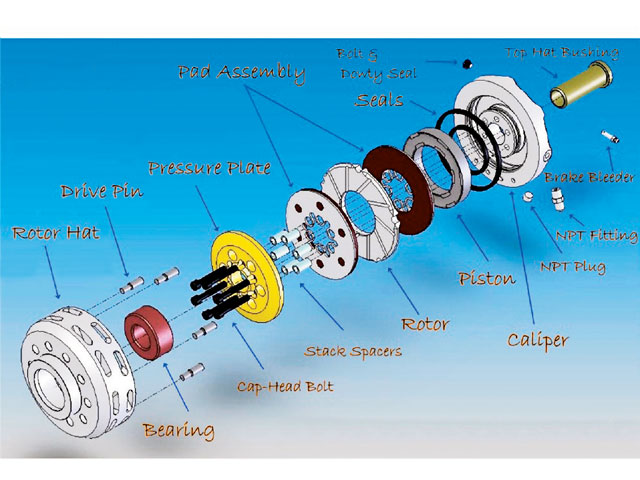 Here’s an exploded view of the 360 Brake. 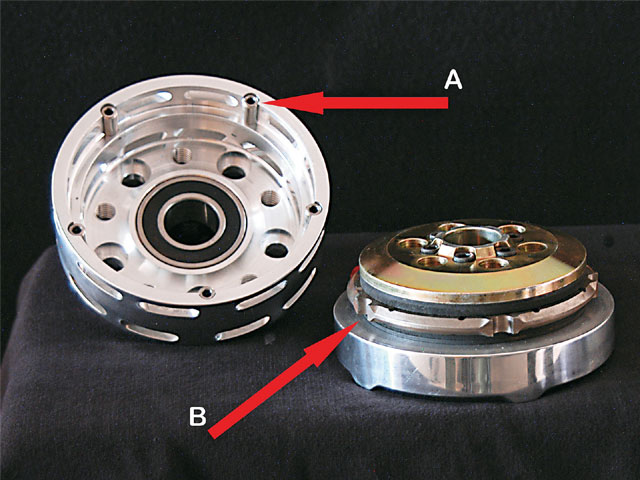 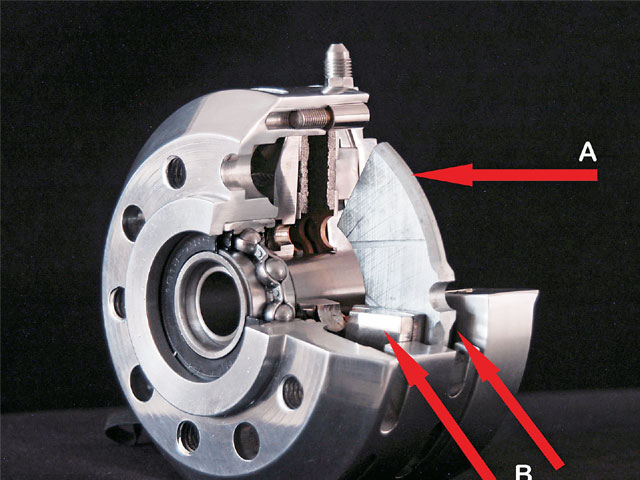 The rotor (A) and the brake pads (B) fully wrap around each other, sandwiching themselves together. When you grab a handful of this braking system, what you get is 360 degrees of compression. Check out your new brake line. No ugly connectors or banjo bolts. The brake line now goes directly into the new caliper and eliminates the old banjo fittings. The bleeders are half the size of the industry standard.

Here at HOT BIKE, we strive to stay on top of the most innovative parts to hit the American V-Twin industry, so we’re bringing you a new tech piece entitled “First Look.” With this series, we will search out the newest parts and get you the inside scoop on what they are and how they work. Then we will follow up in a future issue by actually installing the part(s), explaining the install process, and giving an evaluation. We’re starting this series off with a new brake system from 360 Brake.

Over the past 10 years, the motorcycle industry has gone crazy. Motorcycle builders and manufacturers have made bikes bigger, better, longer, harder, and faster. Finally, someone has figured out a way to stop them. The 360 Brake is a new braking system for motorcycles that replaces the disk-brake rotors and calipers, which tend to hide the custom wheels bike owners have paid a fortune for. Developed by Baldwin Wilson Development Corporation, it is one of the newest components to hit the braking industry.

Fred Baldwin conceptualized the brake design approximately five years ago. Then one afternoon, he visited Tim Wilson’s shop. Fred showed Tim some of the design concept drawings for the 360 Brake System, and Tim suggested they use the bike he was currently building to turn the concept into a reality. Tim and Fred both have a long history in the racing industry and had a desire not only to increase available braking performance, but to create a stylish new look as well. In January 2006 the company officially opened, and the brake system was debuted in March at Daytona Bike Week.

So how does the brake work? The design is actually quite simple. Take a clutch and make it work backward, then stick it in the hub spacer between the wheel and the fork legs or swingarm. OK-maybe it’s not that simple. The 360 Brake is a hydraulically activated brake that applies pressure to a piston that runs 360 degrees around the axle. The piston movement causes two brake pads, also 360 degrees around the axle, to clamp on the internal rotor. The pads and rotor all float across five drive pins that are attached to the rotor hat.

The 360 Brake uses two square hydraulic seals in a groove cut for piston pull-back that allows the brake to release as quickly as it applies, resulting in decreased drag, less wear, and less noise from the pads.

It looks as if you have no brakes at all, when in actuality you have on average 60 percent more brake pad touching the rotor than with conventional brakes. The stopping is smoother because you don’t have the pull of a caliper 6 to 8 inches away from the axle. The brakes now encompass the axle and keep the bike straight during hard stops.

According to 360 Brake, the system was installed and tested in-house and by an independent testing company on a Harley-Davidson Softail. In these tests, from 60 mph to 0 the bike stopped an average of 16 feet shorter than anything the developers had run against it. Tests also showed that because the brake applies pressure to pads that go completely around the axle, the lever-arm effect of feeling as if you’re getting thrown over the handlebars in an emergency stop is greatly reduced. Instead, the rider experiences more of a squatting feeling as the brake creates downforce instead of upforce, which helps the bike stay planted to the road both front and rear.

The 360 Brake also applies downward pressure to the back tire, increasing contact with the road and allowing harder braking without losing traction at the back tire, thus maintaining better control. When increased brake pressure is applied to a motorcycle with a front and rear single-caliper and rotor setup, the bike has a tendency to pull to the side that the brake system is mounted on. The dynamics of the 360 Brake reduce the pull of the brake, causing the bike to track straighter with more control under braking.

The 360 Brake System also changes the dynamics of how the bike handles in a stop. When you take a large steel ring and bolt it to the side of a wheel and get that wheel spinning, you change that wheel from being a typical wheel to being a gyroscope. When you stop the wheel from spinning (as in a panic stop), you lock up the wheel. The brakes stop the wheel from turning, but the inertia of the gyroscopic effect kicks in. This gyroscopic effect is what brings the bike around. Instinctively, the rider will start to counter with his steering, and all too often it ends up in an ugly tank slap, high side and down. By reducing the diameter of the rotor all the way down to 4.4 inches and by wrapping it tight around the axle as the 360’s engineers have, it effectively removes the gyroscope effect. So when you grab a handful of the 360 Braking System, it has the ability to skid in a straight line.

360 Brake currently has brake systems ready for billet wheels and anticipates that wire-wheel and narrow-glide applications will be available later this year. Currently, the 360 Braking System is sold as an install kit for 1-inch axles, but the company also offer a 3/4-inch stainless-steel axle adapter, as well as an optional anti-rotation arm. For many wheel applications, it is a bolt-on system; however, it is recommended that the brake be installed by a professional. Replacement pads, rotors, and miscellaneous hardware are available as a rebuild kit. The units come fully polished and are made from the 2024 T-3 aluminum.

Impalas and Lowrider Bikes is what SoCal is all about. Photo: John Zamora Bare metals hides no flaws. Photo: John […]

Born-Free 10 is here, which means the best builders from around the world have ridden, shipped, or trailered their bikes […]

Use These Utensils To Create Your Next Delicious Meal

Expand your repertoire in the kitchen with these utensils. Whether silicone, metal, or wood, they will help you perfect new […]

Bennett’s Performance Is The Go-To For Harley-Davidson Horsepower