Our first bike is the Sturgis FXB Low Rider. It wasn’t exactly new in 1981; in fact, it was introduced in ’80 as a nod to the annual Black Hills rally. More than 6,845 of these bikes were made between 1980 and ’82, but what separates the ’81 from its predecessor is the use of Buckhorn bars and the absence of the old AMF logo. And speaking of AMF, the banner you see in the background here is a replica of the one Harley had on hand during the transfer of power in 1981. 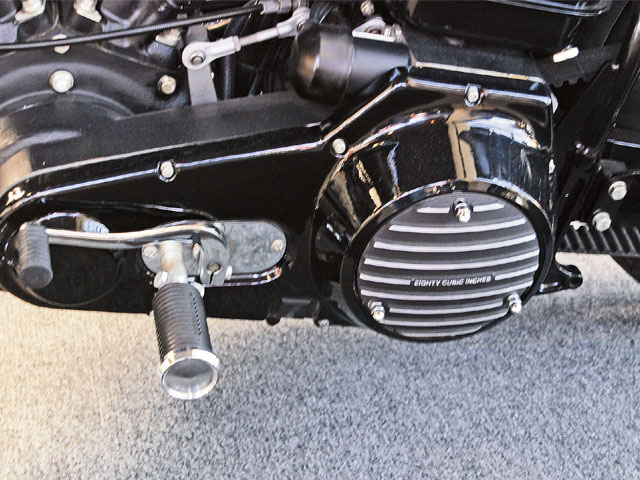 Why the “B” designation, you ask? It stands for “beltdrive.” When Willie G. and Lou Netz designed the FXB, they used it to introduce a beltdrive primary, thus creating a double beltdrive (one in the closed primary, one for the final drive). This wasn’t new technology, since many early bikes used inner belts made of leather. Only the FXB carried it, and the idea was scrapped in favor of the primary chain we’ve all come to know. 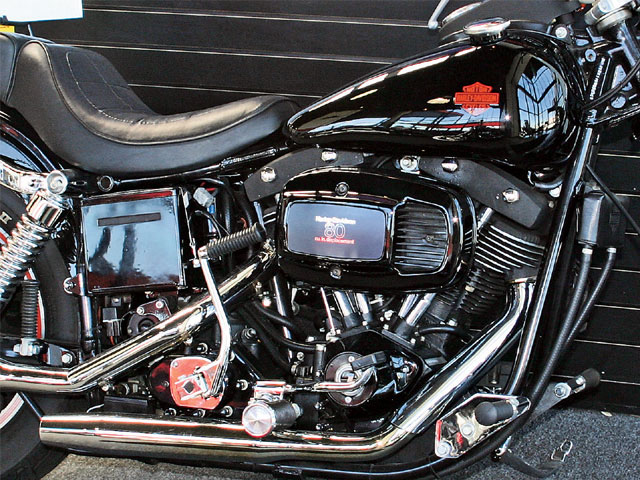 You can ID the Sturgis by its all-black paint scheme… 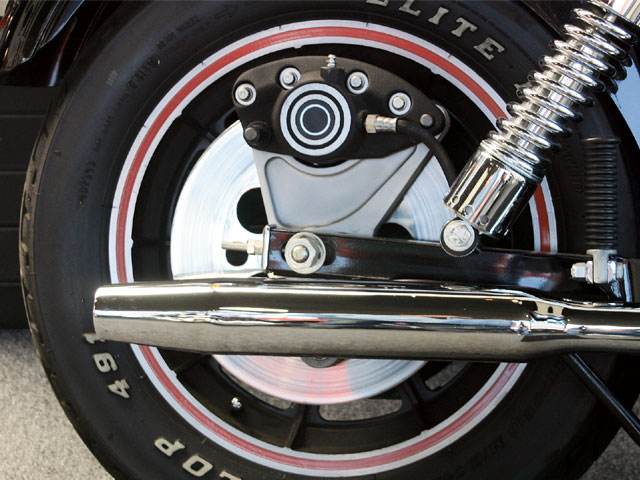 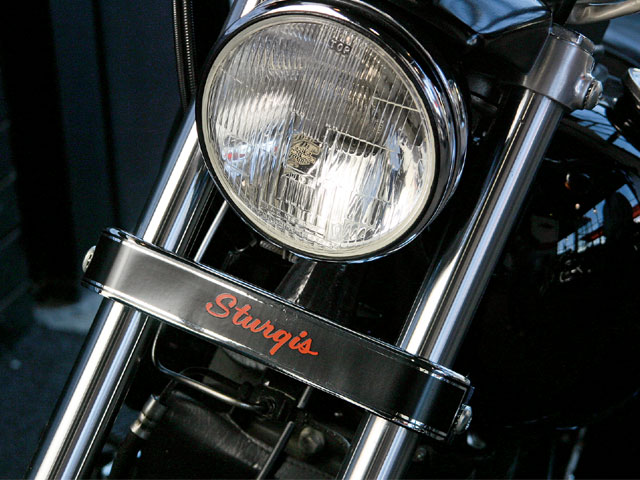 …and the word “Sturgis” written on the frontend helps, too. 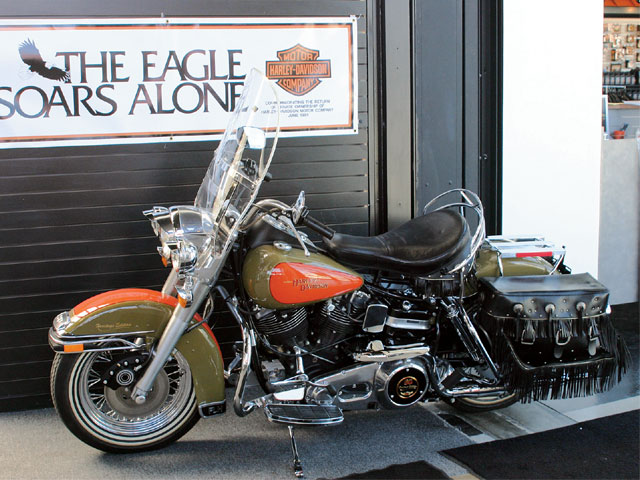 Rarer than the ’81 Sturgis is the Heritage Edition FLH, only 784 of which ever came off the production line. The first of these bikes came with a gold dipstick, and, after a ceremony at the factory in York, PA, it was whisked off to the Harley museum, where it sits to this day. What made this bike special wasn’t just the number manufactured but also the fact that it was the first non-AMF bike produced-that, and its styling. It was the first modern production Harley with the nostalgic look from the ’40s and the precursor to bikes such as the Heritage Softail. The designers achieved that look with pieces like the Corbin-Gentry seat (made exclusively for the Heritage Edition), and the Big Bertha bags, all of which were made for this bike and are rarely seen today. 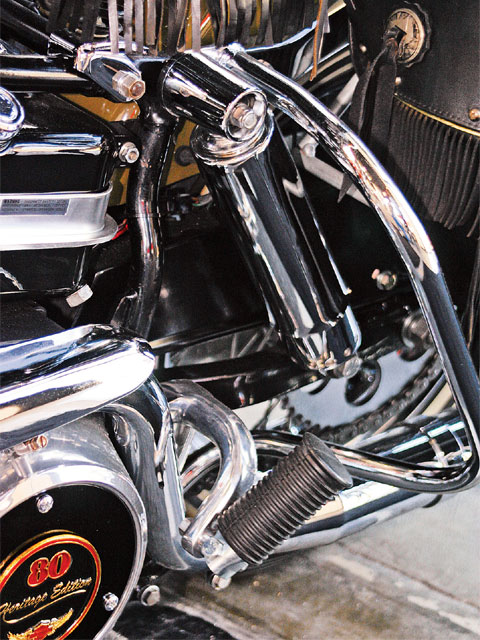 In addition to the powerplant (shovelhead), the biggest tipoff that this particular Heritage isn’t a Softail is the oil tank and shock setup from thepre-Softail era. 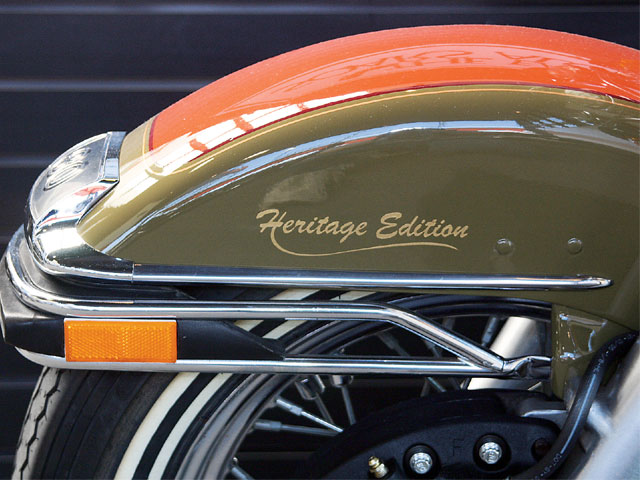 Another unique feature of the Heritage Edition is the hand-painted writing on the front fender. 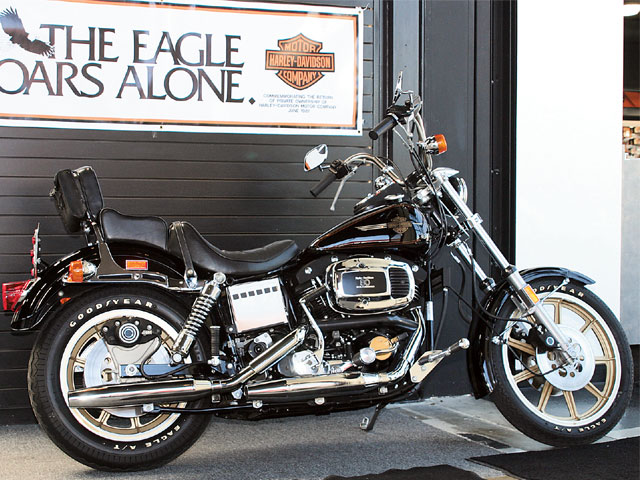 Finally, the main course. Think 784 is a tad low for a production run? Try 14. That’s how many of these FXS Low Riders were made in 1981. One was built for John Davidson and each of the 13 executives who bought the company from AMF. This bike, number two in that run, was John Davidson’s bike (Vaughn Beals received number one and Willie G. number three). The motorcycles were issued on June 16, 1981, and shortly thereafter the group rode the bikes from the Pennsylvania plant to the Juneau factory in Milwaukee, WI. 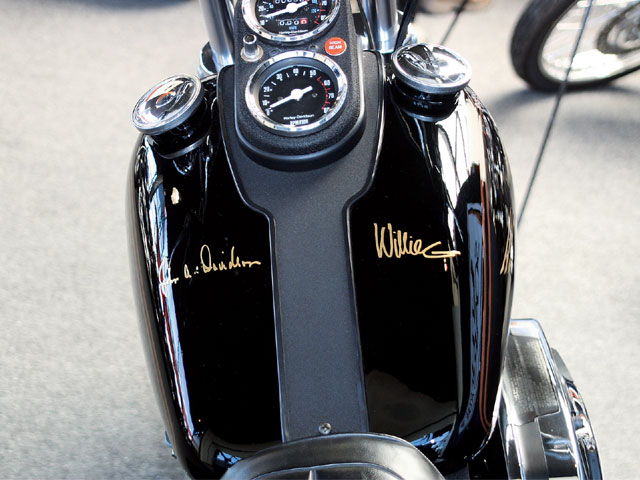 As you can see, both John and Willie G. Davidson signed the gas tanks on this bike. While the fate of Willie G.’s bike isn’t general knowledge, we do know that Harley has number 14 on display at its museum.

The tank logos are unique as well. Instead of the standard “Motor Cycles” seen on most bikes of that time, it says, “Motor Company.”

If you don’t believe us when we say this bike is rare, take a look at the VIN on the frame.

As you can tell from the speedo, this bike still has the original 650 miles from the ride to Milwaukee. Although it doesn’t see any more road time, it is kept in running condition.

After that 650-mile trip, the 14 bikes were put up for auction in Las Vegas, NV, with the proceeds going to benefit the Muscular Dystrophy Association. This one was purchased at the auction by Bob Conley, owner of Conley Harley-Davidson in Dallas, TX, for $21,180. It stayed in his collection until he passed away.

The year 1969 brought a shadow over Harley-Davidson, for that was the year American Machine and Foundry (AMF) bought the Motor Company and made some drastic changes. Production was streamlined and the workforce slashed in an effort to reduce costs, and while these tactics might have worked in the short run, in the long term AMF’s business practices led H-D into a dark age. Layoffs spurred a labor strike, and the “streamlining” led to lower-quality machines. Furthermore, Japanese street bikes caught up to and passed stock Harleys both technologically and in terms of quality. As a result, sales plummeted, and the company almost went bankrupt.

But there were some bright spots, too, especially when it came to racing. Mert Lawill won the AMA Grand National Championship for Team Harley in dirt-track racing in 1969, the same year AMF came to power. A year later, Harley introduced its XR-750 race bike, which would go on to great fame in racing circles. Cal Rayborn also broke the world land-speed record for a motorcycle at Bonneville in 1970. And finally, Jay Springsteen and Scott Parker started dirt-track racing for Harley. Jay took the AMA title for three consecutive years starting in 1976, while Parker started the most successful racing career in H-D history, claiming 93 victories and nine Grand National Champion titles in a 10-year period.

The AMF regime lasted until 1981 (the same year Scott Parker started racing for the Motor Company) when 13 senior execs, led by Vaughn Beals and Willie G. Davidson, bought Harley back and started the bike manufacturer down the long road to recovery. They commemorated this new beginning with several limited-production bikes, including the Sturgis FXB Low Rider, FXS Low Rider, and Heritage Edition FLH. Recently, one of each of these machines was put on display at Bartels Harley-Davidson in Marina Del Rey, CA. They gave us a call and invited us to step back in time for a look at the machines from this pivotal point in Harley’s history.

Boss system with Ghost Pipe and Back Cut tips. 1. Here is the 2-into-1 system with the muffler on the […]

Zipper’s Performance is synonymous with horsepower. The company recently released its new catalog for 2010 packed full of plenty of […]

Two’s Not Always Better Than One

When you go through all the trouble of installing new pistons, throwing on a new set of heads, and swapping […]