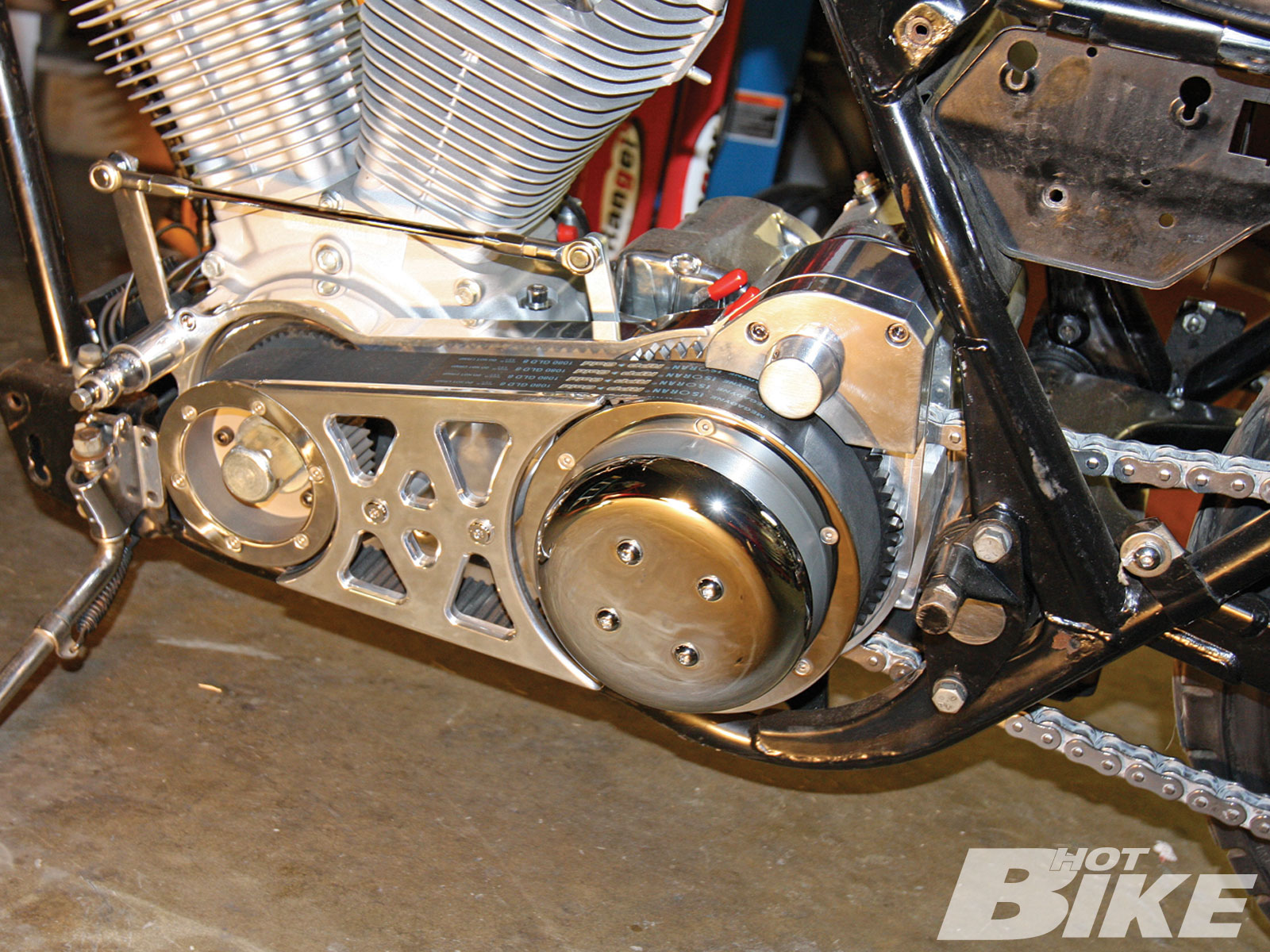 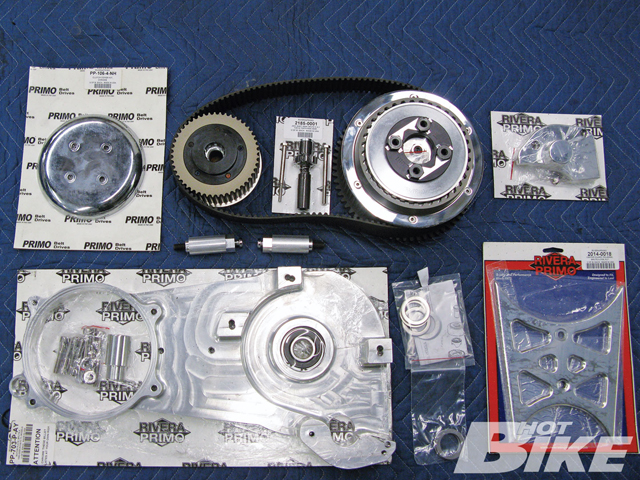 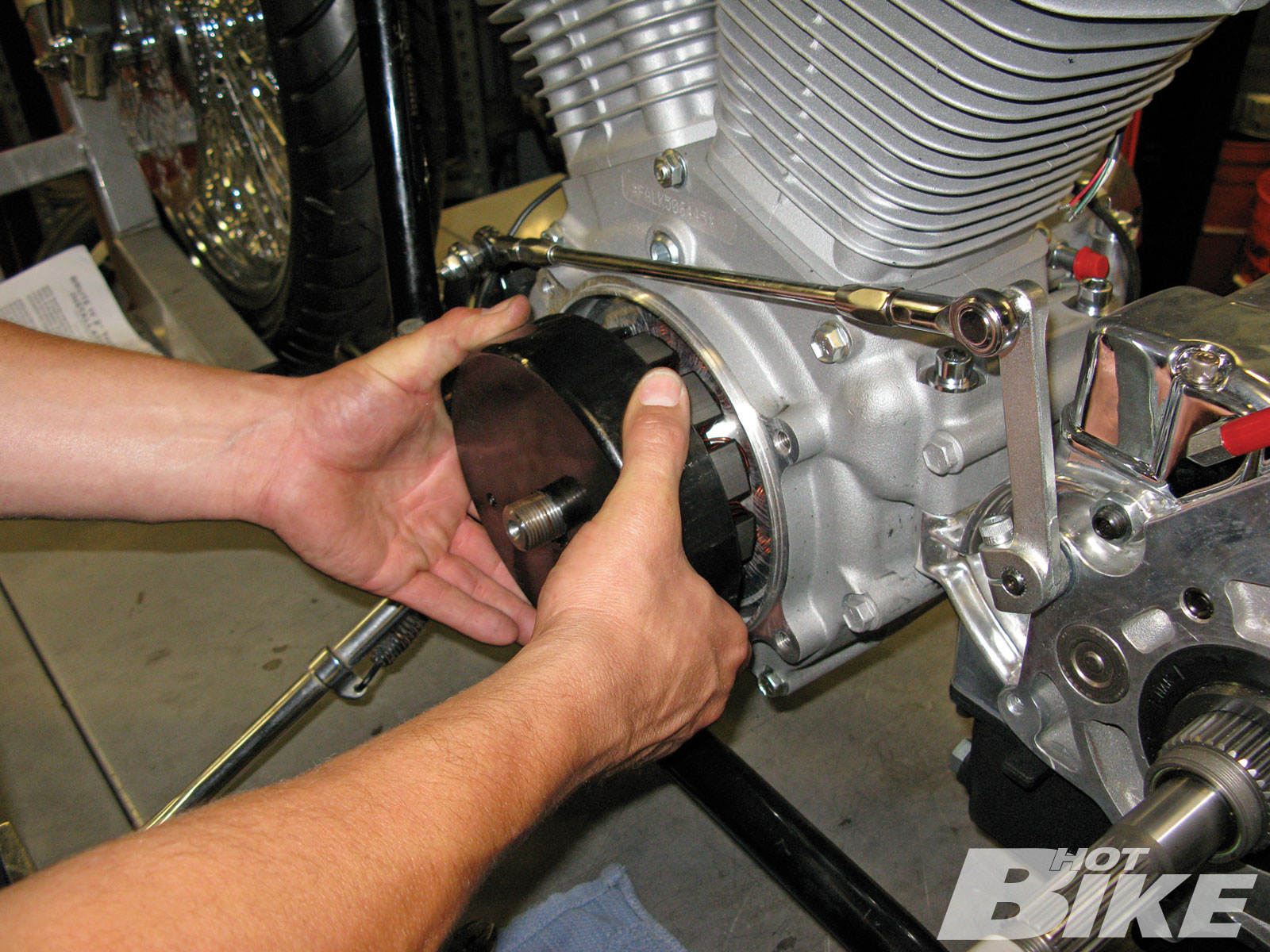 02. Kevin started by installing the stator rotor cover and provided spacer along with the shift arm. 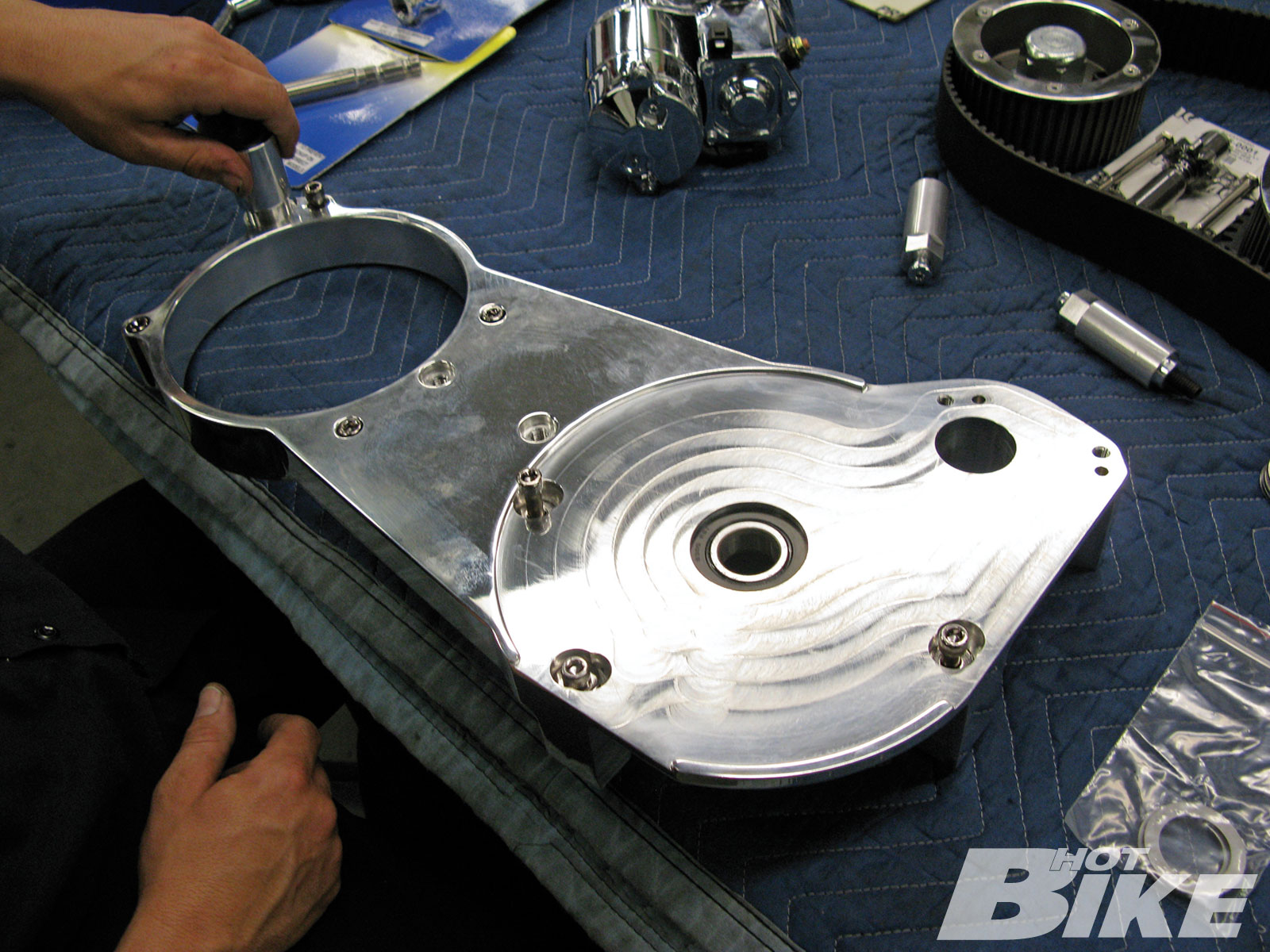 03. The shifter shaft support was installed onto the Primo one-piece billet motor plate. 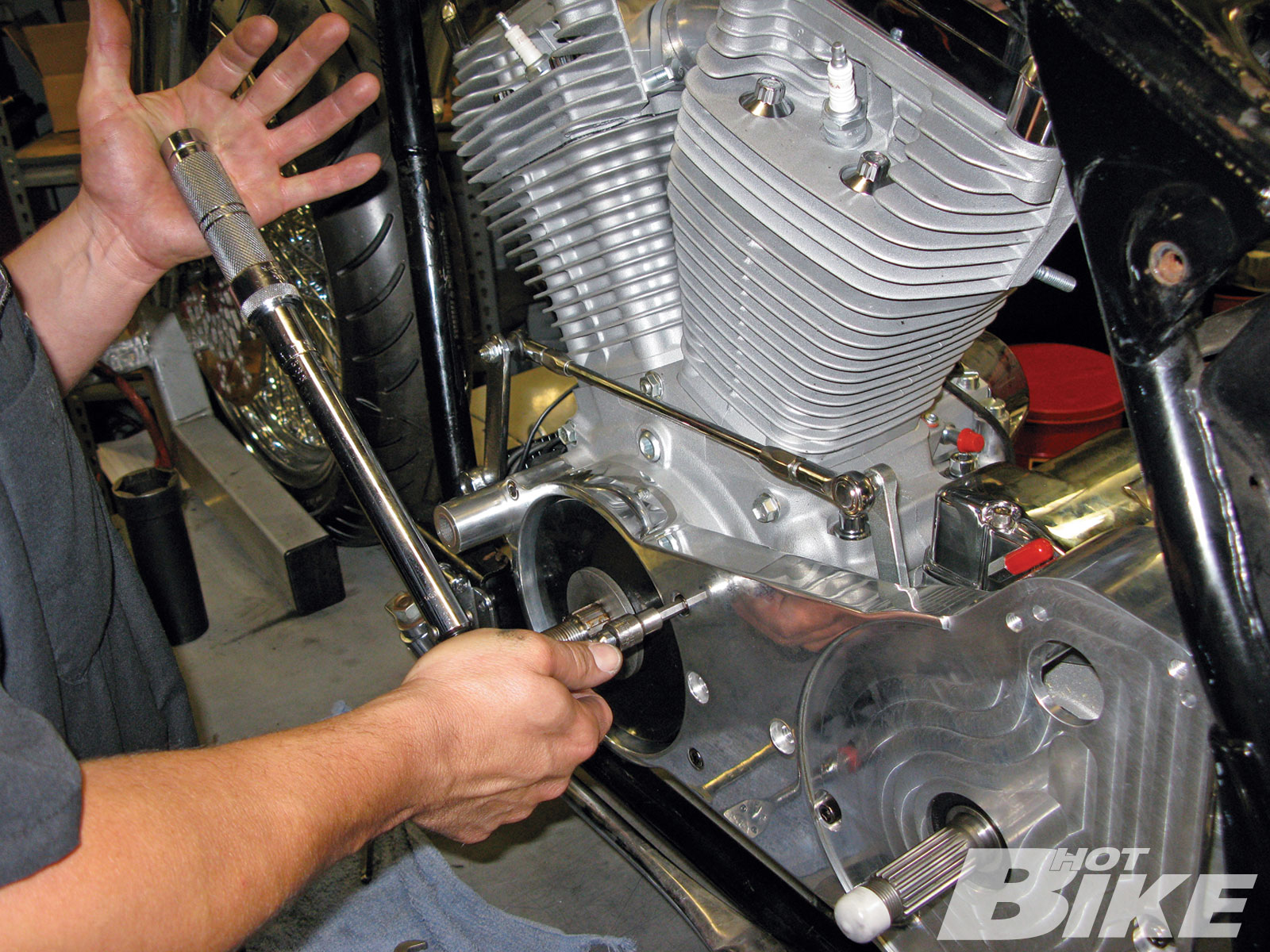 04. The motor plate was then mounted to the H-D Evolution Engine and Primo six-speed transmission and torqued to factory specs. 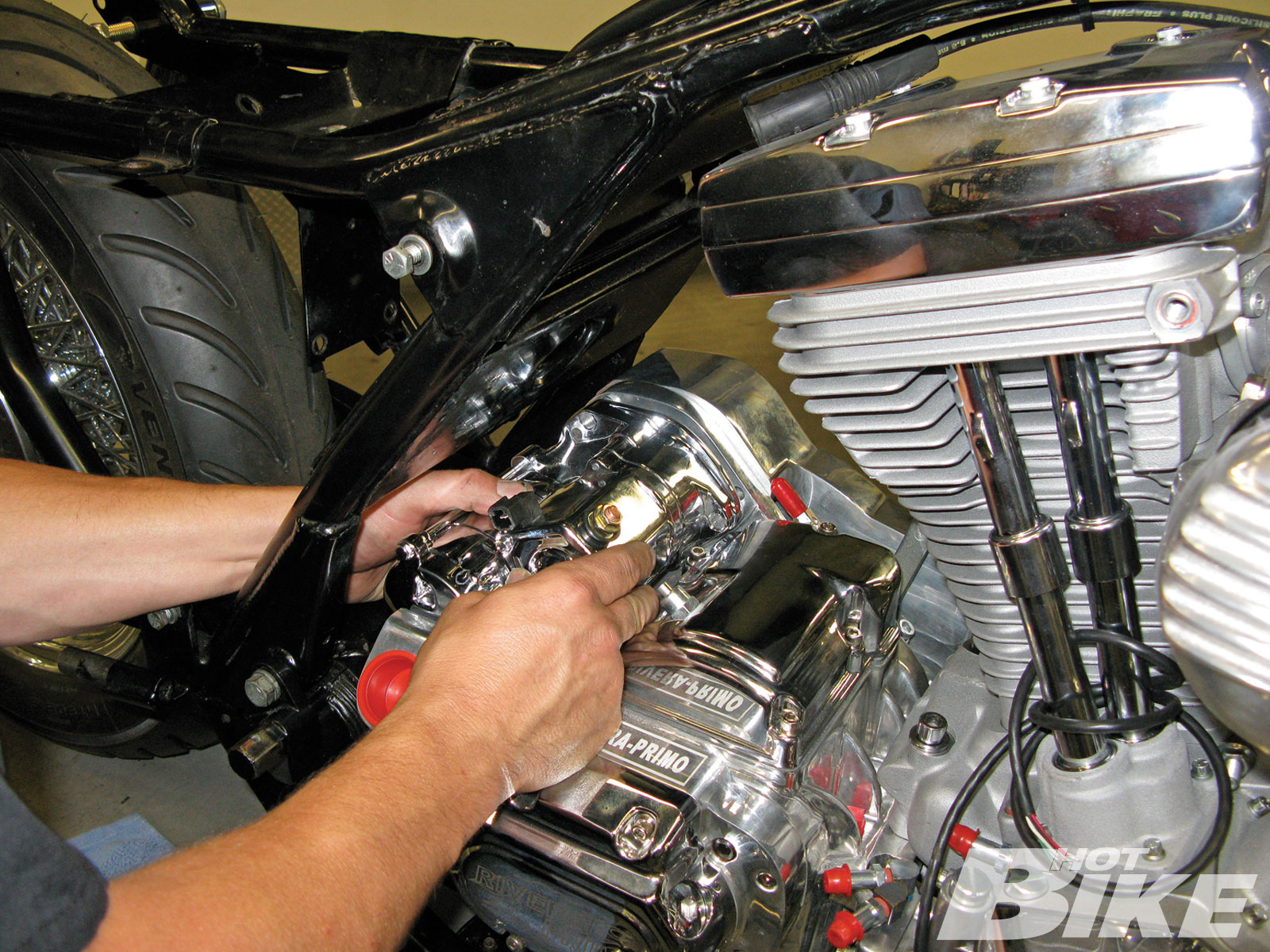 05. Since the whole driveline was new and we didn’t want any weak links, we installed a new 1.7kw Monster-Torque starter from Rivera Primo. 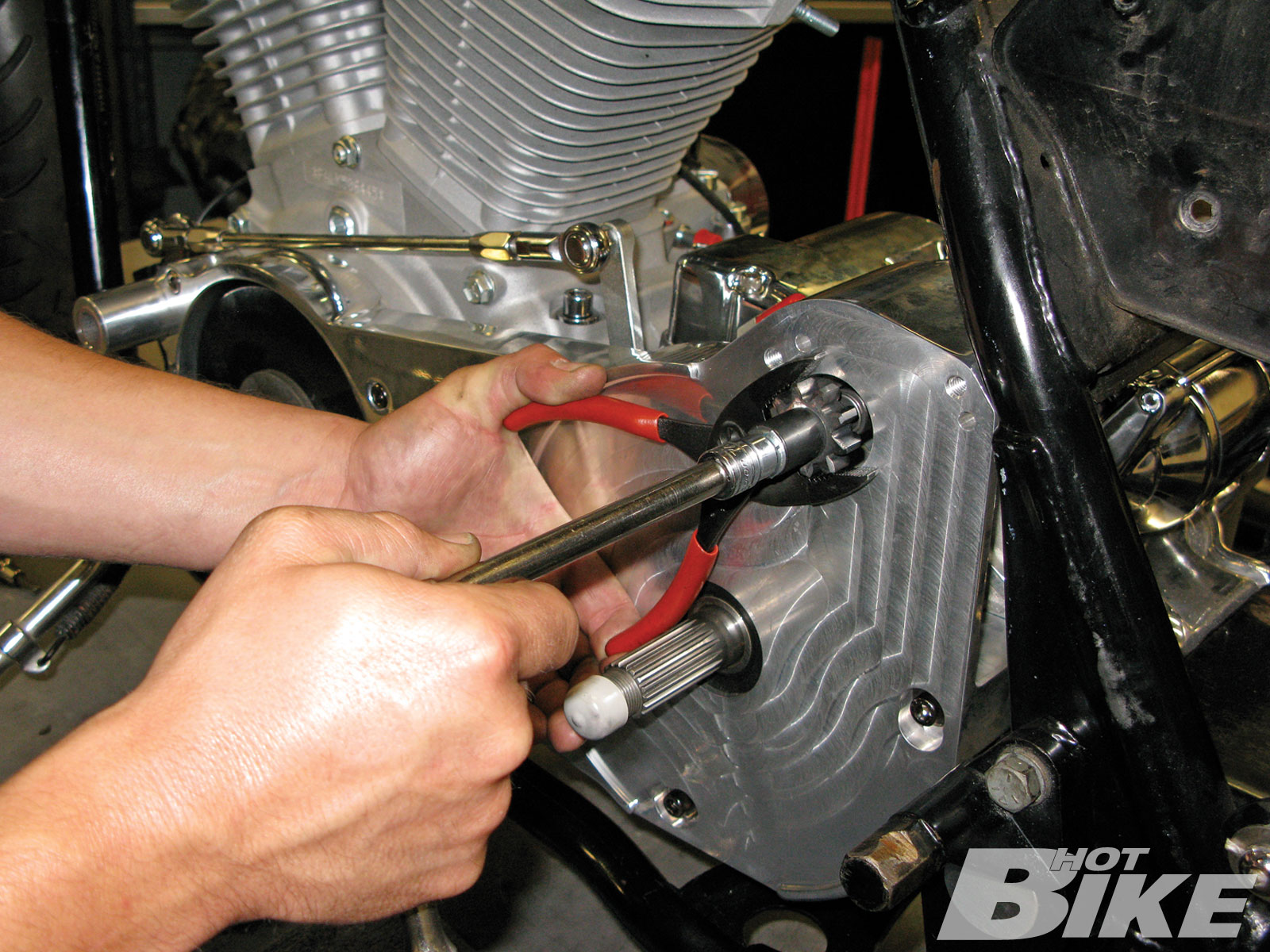 06. The Primo-supplied starter jackshaft assembly was installed and tightened down. 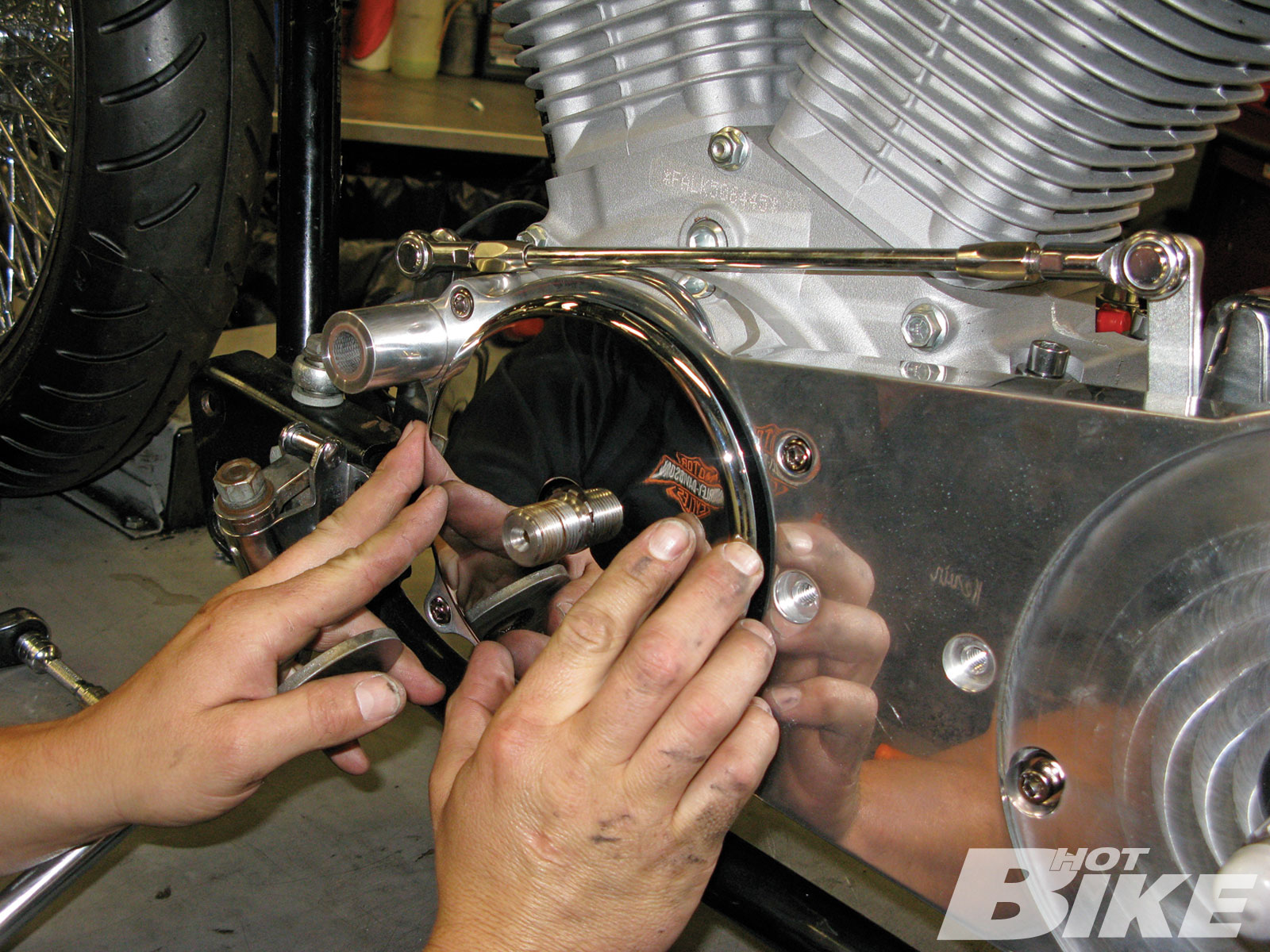 07. A chrome stator rotor cover was fitted to the engine’s drive crankshaft.. 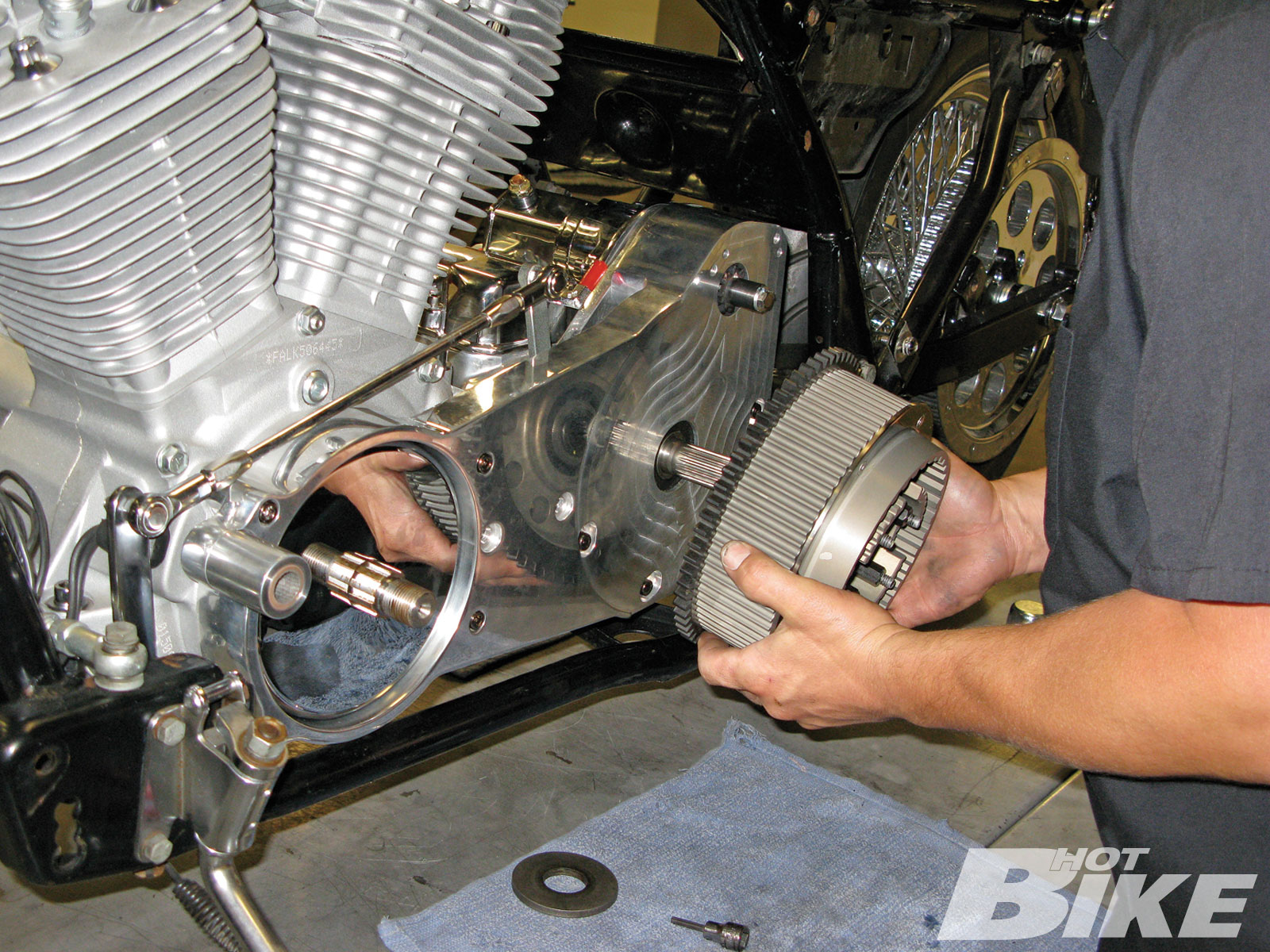 08. Before the pulleys were tightened down with thread locker, Kevin first checked for proper alignment. He installed the rear pulley followed by…

09. …the front pulley, and used a straight edge ruler to make sure they were in alignment for proper belt tracking.

11. The starter jackshaft cover was then installed.

12. And then the Primo Pro Clutch was installed into the clutch basket.

13. The clutch was adjusted to Primo’s specifications

15. The outer center guard of the beltdrive resides on these two aluminum standoffs, which were bolted into place on the motorplate.

16. The outer center guard was then installed with plenty of blue thread locking compound.

17. The outer center guard was torqued to Primo’s specifications

18. After sliding the shifter shaft through shifter shaft support, a spacer was installed which would allow us to eliminate the heel shifter and the job was done.

19. And there it was, one oil-less, trouble-free way to get the engine’s power to the ground and look good while doing it.

In Depth
After we installed our remanufactured H-D Evolution motor and Primo six-speed transmission into our project ’89 FLHS, we were looking to upgrade our primary drive. Wanting a smooth running primary with no chance of oil leakage, our sights were set on an open beltdrive. Plus, we liked the sound of that “rattling” dry clutch our choppers have.

After some searching, we found that few companies were making bagger beltdrives thin enough to use the original floorboard mounts, but called our friends at Primo to see what they had. To our joy, we found out that Primo had just released its 2-inch Bagger beltdrive. Dubbed the Brute IV Touring beltdrive, this system comes with everything needed to convert the OEM chaindrive primary to an open belt. This made-in-the-USA kit comes complete with a severe duty 8mm drivebelt, 6061 forged aluminum pulleys, a starter jackshaft assembly, a CNC-machined motor plate with built-in heel/toe shaft, an outer center guard, and all needed hardware. The kit also comes with Primo’s stellar Pro Clutch setup, which has an increased clutch area and uses a single-diaphragm-type spring in place of the standard wound units for better engagement.

Since our bike was already sitting at Anaheim/Fullerton Harley-Davidson we hustled our new beltdrive over there and strong-armed one of our favorite H-D techs, Kevin, to install it while we shot some photos, so you can see how it was done.

CTEK Lithium US Charger Photo: John Zamora So you decided to get yourself one of those ultra-lightweight, super-cranking lithium-ion-phosphate batteries. […]

Giving Your Garage A Face-Lift? Check Out These Products.

A Birthday Party: 100 Years In the Making