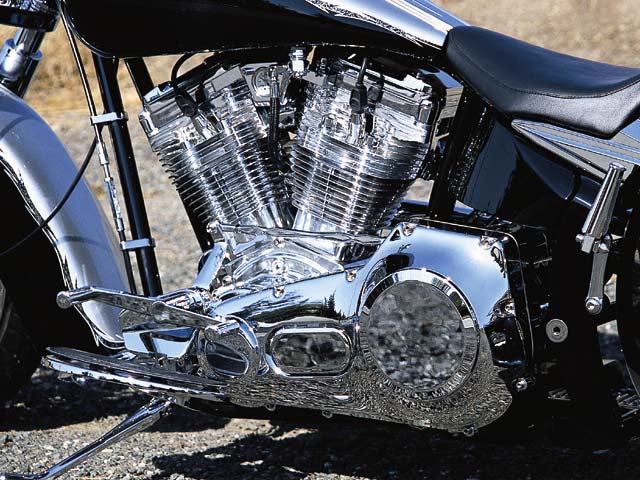 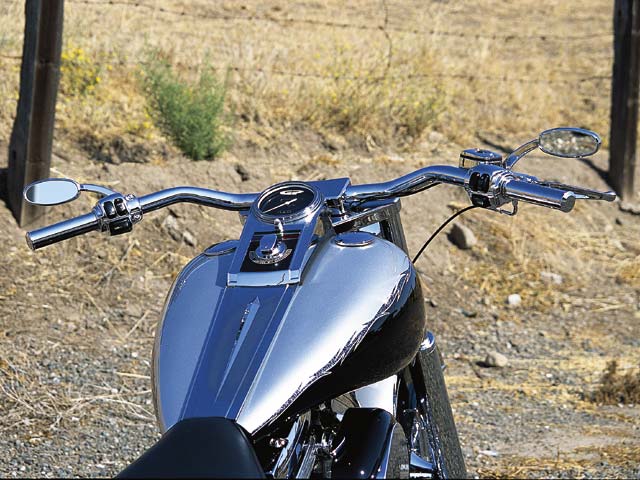 George Pacheco, the owner of GP Designs in Livermore, California, was approached by one of his good friends, Lance Navas, about building him a cool custom bike. While George is always excited to start a new project, he was especially passionate about this one because, after collaborating on a few ideas, Lance gave George free range to do whatever he thought would be best for him and the bike.

The bike’s foundation was as open as the rest of the design, so George and his crew started the build with one of the first GP Designs frames. With a 2-inch stretch in the backbone and 33 degrees of rake in the neck, the frame would create a longer look while maintaining excellent low-speed control. Suspension for the custom came in the form of a Perse billet Wide Glide bolted to the steering neck with Perewitz lowers.

In the back, Legend Air shocks were secured to the swing arm and frame. George thought that the bike would look great with wheels that were more traditional, so he made a call to Billet Boys for a set of Akront spoke wheels. Between the legs of the frontend is an 18×3.5-inch wheel with a 130 Metzeler tire, and nestled within the swingarm is an 18×5.5-inch wheel wrapped in a Metzeler 180. As for brakes, a PM six-piston caliper squeezes a PM Seville rotor in the front, along with a similar setup in the back, except that the caliper is of the four-piston variety.

As far as the engine for the project was concerned, George wanted something reliable with plenty of punch, but nothing outrageous. Lance thought 80 inches would be the best size, so George had Kibblewhite Precision Machining perform the build. Kibblewhite started with S&S; flywheels and rods in S&S; cases. Wiseco pistons were fastened to the rods and slipped into H-D barrels and topped with H-D heads. Kibblewhite opened up the H-D heads and installed its own oversized valves.

Containing the H-D rockers are H-D rocker boxes that are actuated by a Woods cam, H-D lifters, and Taperlite pushrods in a set of GP Designs pushrod tubes. An S&S; carb and a GP Designs air cleaner flank the right side of the bike, just above a pair of GP Designs Smoke Pumpin’ Hotties exhaust pipes. Transmitting the engine’s power to the rear wheel is an H-D primary and a Baker six-speed transmission.

The sheetmetal for the bike was the next aspect that GP Designs would tackle. It started with a Russ Wernimont rear fender, a GP Designs oil bag, a Robert Moore front fender, and an H-D gas tank. The fenders were fit exactly to the tires and mounted with a set of special construction billet fender struts made by the GP crew. Then, the gas tank was stretched before all the bike’s skin was mocked-up on the frame to test for fitment.

The sheetmetal needed paint, and it was all shipped to Riff Raff Customs, where it received generous coats of two-tone silver and black, with a cool jagged edge separating the two colors.

A short while later, the painted parts returned to the GP Designs shop, and the crew got to work getting the bike put back together, along with all the final accessories. A Headwinds headlight was mounted to the triple-trees just below a set of GP Designs risers, which held a set of Chubby’s bars, GP Designs mirrors, and H-D controls. The GP Designs dash houses an H-D speedometer and H-D controls, and GP Design floorboards were secured to the framerails. Finally, a Yaffe taillight/license mount was bolted on, as well as a Corbin seat.

The bike came together perfectly, and after test riding the bike for a day, George called up Lance to come by the shop. He handed the keys over to his friend knowing that Lance wasn’t going to get to keep the bike for long — the GP crew had done such a good job on the bike, George was going to need the bike to take to shows. Thankfully, Lance understands, and without too much persuasion, lends George his bike whenever he needs it.

1. Here are the Flat Top cut ball-mill Forward controls along with a set of passenger pegs. 2. Also if […]

From its inception until about four years ago, the American V-Twin market was based on custom bikes that bordered on […]